Gen. Hayden and the claimed irrelevance of presidential appointments

Since when did people start believing that high-level appointments and Cabinet secretaries were irrelevant? 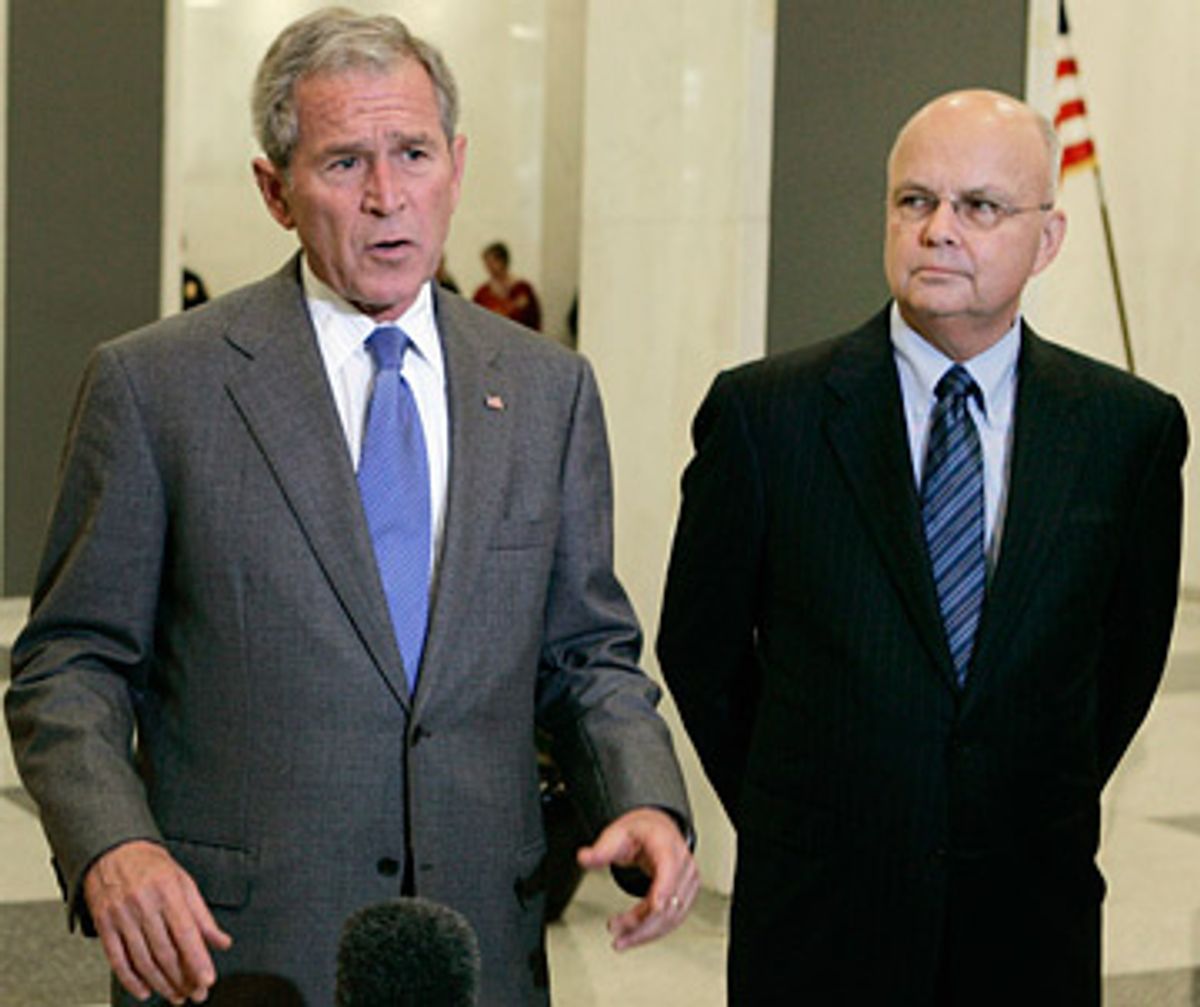 A report from U.S. News & World Report today suggests that Obama is considering having Gen. Michael Hayden -- Bush's former NSA Director -- remain on as CIA Director.  I have no idea whether that report is true, but here is what I do know:

(1)  In May, 2006, Barack Obama voted against confirming Gen. Hayden as CIA Director. Obama was one of only 15 Senators to oppose Hayden.  In his speech on the Senate floor explaining his vote, Obama emphasized Hayden's role as Bush's NSA Director in implementing and overseeing Bush's illegal warrantless surveillance programs -- programs Obama has repeatedly decried as an assault on the rule of law.

In fact, Obama, while acknowledging in his speech that Hayden was "qualified," described Hayden -- accurately -- "as the architect and chief defender of a program of wiretapping and collection of phone records outside of FISA oversight."  Obama said his vote against Hayden's confirmation was necessary "to send a signal to this Administration that even in these circumstances President Bush is not above the law" and "in the hope that [Hayden] will be more humble before the great weight of responsibility that he has, not only to protect our lives, but to protect our democracy."

If, less than 3 years later, Obama chooses as his CIA Director the very same Michael Hayden -- who, during his confirmation hearing, justified Bush's illegal NSA spying and said how proud he was to help implement it [to say nothing of his (at best) equivocations on torture] -- then it should be quite . . . let us, for the moment, say "interesting" . . . to watch him and his most loyal supporters explain and justify that.

(2) Until five weeks ago, I literally never heard anyone claim -- in either party -- that it was irrelevant who the President appointed to his Cabinet and other high-level positions.  I never heard anyone depict people like the Defense Secretary and CIA Director as nothing more than impotent little functionaries -- the equivalent of entry-level clerical workers -- who exert no power and do nothing other than obediently carry out the President's orders.

In fact, I seem to recall pretty vividly all sorts of confirmation fights led by Democrats over the last eight years (John Aschroft, John Bolton, Alberto Gonzales, Michael Hayden, Steven Bradbury) -- to say nothing of the efforts to force the resignation or dismissal of people such as Donald Rumsfeld, Paul Wolfowitz and Gonzales -- that were based on exactly the opposite premise:  namely, that it does matter who is empowered to lead these agencies and departments, and specifically, that their ideology not only matters, but can, by itself, warrant rejection.  Nobody ever claimed that Ashcroft, Bolton or Hayden were "unqualified."  It was their beliefs and ideology that rendered them unfit for those positions, argued Democrats.

When and why did everyone suddenly decide to change their minds about this and start repeating the mantra of some Obama supporters that high-level appointments are irrelevant because only the President counts?   For the people who now make this claim to justify Obama's appointments, were any of them objecting during any of the above-listed confirmation fights that those fights were wasteful and unjustified because presidential appointments are irrelevant?

Other than Brennan (and Hayden, if that happens), I haven't felt very strongly about any of Obama's appointments, mostly because they're roughly what I expected.   And it is true that a President's actions matter more than his appointments (which isn't saying that the latter is irrelevant).  But I nonetheless find it striking how quickly people are willing to spout a position that they never previously believed and even is at radical odds with what they've said and done in the past -- Cabinet appointments are irrelevant! -- simply because the new position justifies what someone they like is doing.

(3)  Numerous others have already said most of what needs to be said about the repellent decree issued by Obama deputy campaign manager Steve Hildebrand that "this is not a time for the left wing of our Party to draw conclusions about the Cabinet and White House appointments that President-Elect Obama is making."  Apparently, we all have to wait just a little bit -- just until they "get our economy moving, bring our troops home safely, fix health care, end climate change and restore our place in the world" -- before we can opine on our President's actions and decisions (Bill Kristol issued a similar judgment in 2007 about war opponents who refused to wait and see whether the Surge would work:  it's "so irresponsible that they can’t be quiet for six or nine months").

But what I want to focus on is this justifying claim Hildebrand offers as to why liberal concerns about Obama's appointments are misplaced:

Some believe the appointments generally aren't progressive enough. . . . The problems I mentioned above and the many I didn't, suggest that our president surround himself with the most qualified people to address these challenges.

Since when did "qualifications" become the all-powerful trump card when it comes to political leaders -- even more than one's political beliefs, principles and ideology?  As I wrote before, it's a complete myth, a manipulative trick, to claim that "competence" and "ideology" have nothing to do with one another.

If "qualifications" were all that mattered, Barack Obama wouldn't be President.  People voted for him despite his lack of qualifications, not because of his abundance of them.  Does anyone dispute that Donald Rumsfeld, and Dick Cheney, and David Addington, and John Ashcroft and Hank Paulson were supremely "qualified" in every sense that this term is normally meant?  What made them atrocious wasn't their lack of qualifications but their ideology and belief system, and what made Obama attactive to many people wasn't that he was "most qualified" but was his ideology and belief system.

This idea that "qualifications and pragmatism matter, not ideology" is a meaningless buzzphrase.  It's pure nonsense designed to neuter any criticism of Obama's appointments.  If someone wants to say -- as Atrios did today --  that they're willing to tolerate the exclusion of liberals from Obama's cabinet and even demonization campaigns against the Left if that's the vehicle and strategy for enacting a progressive agenda, that at least is a rational assessment (though I think there's serious costs to encouraging not only Republicans and the media, but also Democrats, to all join together to agree that the one unspeakable bogeyman is the Left).

But this broader point that pragmatism and "competence" are being valued above ideology is incoherent and manipulative.  When it comes to political power, this claim is devoid of meaning.  Ideology, by definition, always matters when it comes to what political leaders do.  And yet -- just like the brand new claim that high-level appointments don't matter -- many, many people have been easily persuaded to recite this "competence-over-ideology" mantra over and over.

UPDATE:  The top diary currently on Daily Kos dismisses criticisms of Obama's appointments by explaining that Obama is going to be just like Don Corelone in The Godfather -- he's going to issue orders and everyone around him will simply comply (h/t Scientician).  While lots of whiny liberals are running around stupidly mouthing off with their opinions about Obama's appointments, the diarist excitedly explains:  "Don Obama is sitting calmly at the top working quietly to put his plan into place."

UPDATE II:  Digby speculates about the interplay between the withdrawn Brennan nomination and this new Hayden rumor, and also documents -- significantly -- that Hayden has emphatically maintained in the past that the CIA must not be bound to the interrogation techniques in the Army Field Manual and that it cannot effectively do its job if it is.  That would be a very odd posture for a CIA Director in an administration headed by a President who repeatedly vowed to impose the Army Field Manual on the CIA as the most effective way to end the torture regime.

UPDATE III:  Spencer Ackerman thinks "there’s no chance that Obama would actually pick Hayden" and that the report is being floated by Hayden allies inside the CIA.  I, too, would be surprised (mildly, not overwhelmingly) if Obama asked Hayden to remain even temporarily, but as the Brennan incident demonstrated, there is real value in expressing objections to highly objectionable appointments before they are announced.  Reports of prospective nominees are leaked precisely to see if there is formidable and intense opposition.  While it's important not to assume every one of these rumors is true (which is why I noted in the first paragraph that this one may very well not be), this is the time to express and build opposition to potential appointees, not after the nominee is announced.

It's worth noting that disagreements and objections directed at political leaders aren't a bad thing.  An astounding 79% of the public approves of Obama in the transition.  Having "the Left" exert pressure to ensure attention is paid to its political values isn't going to cause a collapse of the Republic or even the Obama presidency.  To the contrary, as The Atlantic's Marc Ambinder observes, the Left's objections have actually been quite muted, but provide an important benefit:  "to prevent Obama from ruling as a royalist, a little cross-pressure is probably a good thing."

Even in this New Era of Trans-Partisan Harmony, there's nothing wrong with citizens objecting to what political leaders do and trying to pressure them to move in directions that they perceive are better.  That's actually called "democracy."  As upsetting as that disharmony apparently is to some, it's actually far preferable than the alternative, where everyone lines up behind a leader and agrees to remain respectfully silent and trusting in his superior judgment.  Between excessive citizen activism and excessive trust or passivity, the former is far preferable to the latter.