The hunting of the president resumes

The right is trying to link Obama to Blagojevich and corruption -- and the mainstream media is playing along. The Clinton rules are back. 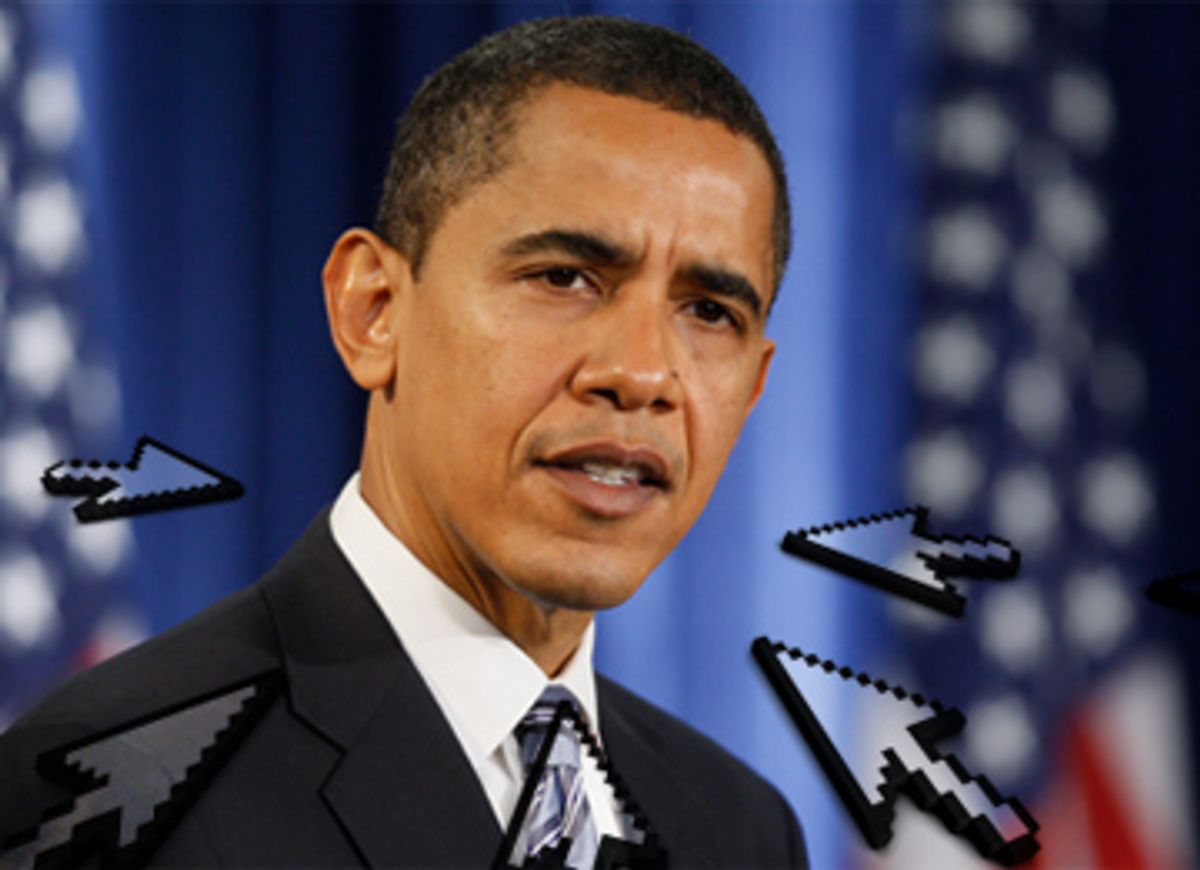 Questions are raised. Connections are drawn. Conspiracies are theorized. Guilt is imputed, implied, asserted and very widely associated. And more of the same feckless fingerpointing is exactly what Barack Obama should expect from the Republicans, the right-wing propaganda machine and their enablers in the mainstream media -- even after Illinois Gov. Rod Blagojevich has met whatever fate he deserves.

From the kooky obsession with his place of birth on WorldNetDaily to insinuations about his Chicago pedigree by the Associated Press, all of the attacks launched lately on Barack Obama give off the same familiar smell. Even a quick sniff is enough to bring back memories from a decade ago, when no perfidious accusation against Bill or Hillary Clinton was too crazy to deserve attention.

The madness that was eventually classified under the quasi-clinical rubric of "Whitewater" began, in no small degree, with the dubious idea that Arkansas, the Clintons' home state, was a peculiarly corrupt place -- and that any politician from Arkansas by definition was suspect (but only if he or she happened to be a Democrat).

Many of the familiar figures and institutions that should be permanently discredited by their roles in the Clinton drama have emerged again to smear Obama. Newsmax, the big right-wing Web site founded by Richard Mellon Scaife, sugar daddy of the Arkansas Project, dispatches daily news alerts with blaring headlines: "Obama Birth Certificate Battle Not Over" and "Obama, Blagojevich Tied to Same 'Godfather.'" Rush Limbaugh, who has never stopped hinting that the Clintons murdered Vince Foster, no matter how many investigations concluded that Foster's death was a tragic suicide, now wonders how Obama could be unaware of "all this stuff swirling around him."

Such are the "questions" darkening the great forensic brains of the right. "Did Barack Obama's transition team know this was going on? Heck, did Barack Obama himself know this was going on?" demands radio talker Neal Boortz. And asking a question is tantamount to winning a conviction, or at least an indictment, according to the perverse norms of discourse established during the last Democratic administration -- or what my friend and coauthor Gene Lyons calls "the Clinton rules."

Everyone playing by those rules, including the mainstream journalists who echo the mindless "questions," understands that mere facts need not get in the way of a juicy scandal. Everyone playing by the Clinton rules also knows that it is virtually impossible to prove a negative -- to prove, for example, that Obama didn't know how Blagojevich was abusing the Senate appointment. (Which is why civilized judicial systems presume innocence and require proof of guilt beyond a reasonable doubt, of course.)

Moreover, everyone knows how easily the equations of guilt by association can be constructed: Obama and Blagojevich are both Chicago Democrats and they know lots of other Chicago Democrats, some of whom gave money to both of them; therefore, both are products of a corrupt political machine. Suddenly, it is time to measure the tall, skinny guy for an orange jumpsuit.

But Obama has long been among the luckiest of politicians -- and the circumstances of the Blagojevich case come as close to instant exoneration for him as any political scandal possibly could. Not only does the indicted governor complain on tape that Obama won't give him anything in exchange for the Senate appointment, but he curses out the president-elect for that annoying probity in obscene terms.

Or as the federal indictment quotes from the months of wiretaps on the Illinois governor: "Rod Blagojevich said that the consultants are telling him that he has to 'suck it up' for two years and do nothing and give this 'motherfucker' [Obama] his senator. Fuck him. For nothing? Fuck him."

If Blagojevich's own pungent words don't answer the supposed questions about Obama, then perhaps the explicit exoneration offered by U.S. Attorney Patrick Fitzgerald, who ran this investigation, should suffice. The quoted portions of the Blagojevich wiretaps represent a very small percentage of the conversations taped and monitored by the FBI. Knowing Fitzgerald, it is safe to assume that his agents heard nothing that implicated Obama or members of his transition staff in the Blagojevich scheme.

While that should be obvious, don't expect the excited Republicans to calm down anytime soon. Having nothing to sustain them for the moment except a whiff of Democratic scandal, they can hardly help themselves. They will persist in their partisan efforts to undermine the new president.

As for the rest of us, including mainstream reporters, perhaps we should be mindful of the vast amounts of money, time, and journalistic, prosecutorial, congressional and presidential effort that were squandered on the mythical crimes of the Clinton era. Can America still afford that kind of stupidity?