Congress handed Wall Street a huge wad of cash to jump-start the economy. It didn't work -- so where did all that money go? 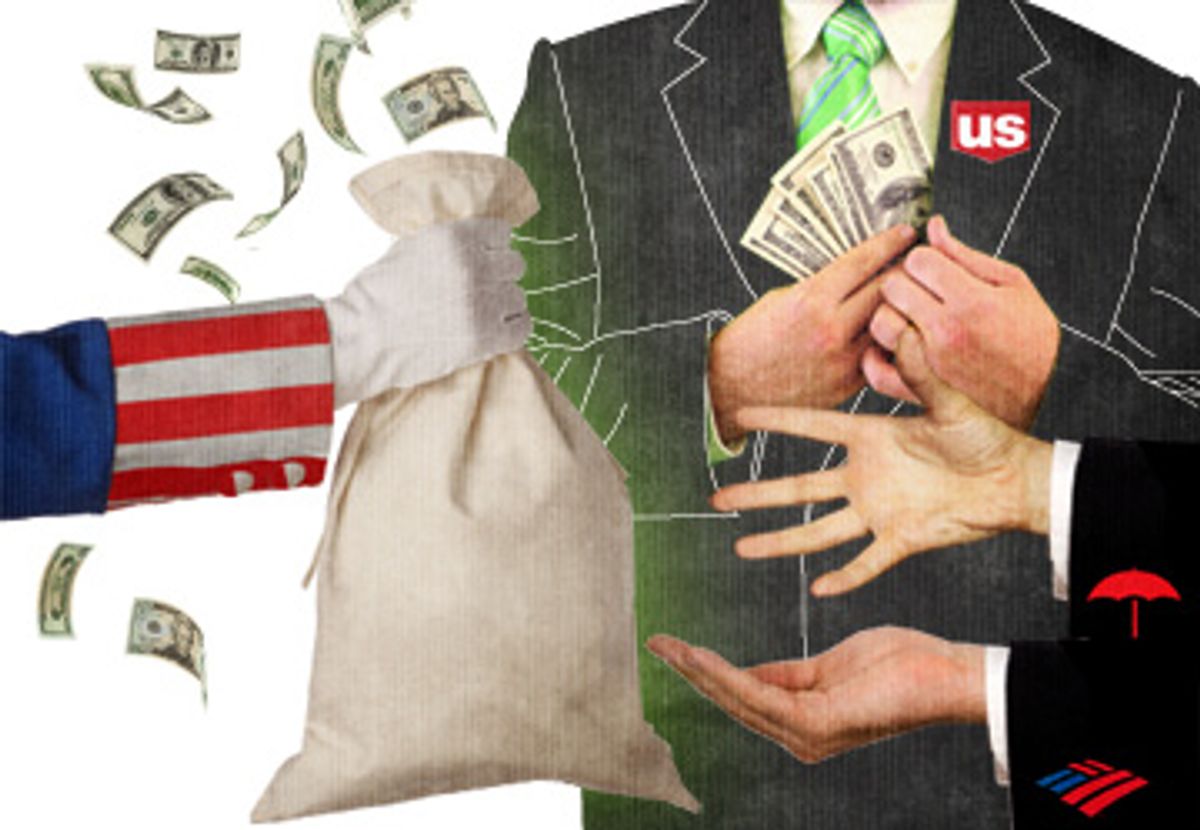 Giving $700 billion to a bunch of Wall Street bankers was never overwhelmingly popular. Back in October, the weekend after Congress passed what was supposed to be an emergency plan to save the economy, only 40 percent of voters said they liked the idea. But the stock market was tanking, and banks looked pretty woozy and, the theory went, the bailout would help stabilize things.

Oh, for those flush days of October. This won't be news to anyone with a 401K or without a winning lottery ticket, but even though Treasury Secretary Hank Paulson has burned through almost all of the first $350 billion Congress authorized, it didn't quite turn things around. The infusion of money may have kept credit from tightening up further, but it certainly didn't jump-start the economy -- banks didn't resume lending to businesses and consumers. Stock prices never really recovered from their early autumn plunges, and more than half a million jobs vanished just last month. With the benefit of hindsight, lawmakers now express regret about the way the bailout was handled -- with few provisions for oversight of the banks or the Bush administration -- and the public hates it more than ever. The feeling that money and political capital were squandered even helped endanger the far cheaper and more popular bailout of the auto industry. So what went wrong -- and where did all that money go?

A lot of it is, apparently, just sitting in the bank. A Government Accounting Office audit released earlier this month showed the Treasury Department doling out buckets of cash: $15 billion for Bank of America, $45 billion for Citigroup, $3.5 billion to Capital One, nearly $6.6 billion to U.S. Bancorp. The feds were essentially taking out the trash -- buying shares in various banks that had gotten themselves into trouble by issuing crappy mortgages using complicated formulas, assuming the cost of many of the mortgage-backed securities that were weighing down the balance sheets of every financial institution in the country. The feds were pumping money into these banks so they would feel free to make more loans -- better, simpler, sounder loans. The epidemic of exploding mortgages and failing institutions would ease. But the banks did not start making new loans. They seemed to sit on their federal windfalls. And the Bush administration kept handing out more.

By the time Treasury had gotten around to giving $1.4 billion to Zions Bancorporation in Salt Lake City (which was originally founded by Brigham Young), before finding even a few hundred million bucks for actual homeowners struggling to make their mortgage payments, it was pretty clear that things weren't working out exactly the way everyone in charge said they would. And as of a couple of weeks ago, Treasury had spent all but $15 billion of the first installment of the bailout money, and the administration may soon ask permission to tap into the second chunk, which they were supposed to leave for Barack Obama's administration to disburse.

"It's amazing how quickly you can get through $350 billion," said Steve Ellis, vice president of Taxpayers for Common Sense, a budget watchdog group based in Washington. The problem with the way the money flowed out, from Ellis' perspective, is that there's no way to say what it's done to stabilize the economy. "There is a black box where that checkbook is, and we can't see into it," Ellis said. "Once the money leaves Treasury's hands, we have very little knowledge as to what the heck we're getting for the billions of dollars."

Now, even the people who designed the bailout say they're not happy about it. In the rush to action they didn't place enough controls on how the administration doled out the money, or what the institutions did with it once they got it. They also acquiesced to a one-sentence change requested by the Bush team that effectively protected the massive pay of Wall Street execs. "I don't think there's any way, under these circumstances, the administration would be able to get the resources," Sen. Chris Dodd, D-Conn., who chairs the Senate Banking Committee, told reporters Friday. House Speaker Nancy Pelosi was reduced to scolding Bush and Paulson after the fact for their failure to use the money to help homeowners. "It was very clearly spelled out in the initial legislation that funds would be used for mortgage foreclosure forbearance," she said Monday. "It wasn't until ... we intensified the provisions that related to keeping people in their homes that this legislation even passed the House of Representatives. But it's been totally ignored by the administration. Absolutely nothing has been done to respect that part of the legislation, which is the only part of the legislation that had support in the Congress and enabled it to pass and become law."

But the banks are used to getting their way, and there probably wasn't much reason to think they wouldn't this time around, too. The financial sector has always been a generous donor to political campaigns, and it gives heavily to both Republicans and Democrats. By the 2008 election, with Democrats firmly ensconced in control of Congress (and heading for control of the White House), commercial banks had split their $34 million in campaign contributions almost evenly to both political parties. Investment firms, many of which are converting themselves into commercial banks to grab some Treasury funds, gave far more -- $141 million this year -- and have been spreading the wealth around to anyone with power in Washington for years.

Chances are they'll keep getting their way, too, even after Obama takes power. His pick for Treasury secretary, Tim Geithner, was one of the prime architects of the government bailouts of Bear Stearns and, later, AIG, and may have been one of the main reasons why Lehman Brothers didn't get the help they did.  One reason Wall Street reacted so positively to Geithner's nomination was because it had already been dealing with him for months on exactly the same stuff he'll be in charge of in office. (He seems to like doing it, too. "We live for this," he told a college friend in the midst of the financial collapse. "We live for these kinds of crises.")

Besides, no matter how much Pelosi, Dodd and others grumble about what the Bush administration has done with the cash they controlled, they're probably going to have to give them more. Once the Senate refused to loan money to Detroit (led by an anti-union, pro-foreign automaker clutch of Southern conservatives), the administration said it would step in if necessary. That would just about use up the $15 billion left in the Treasury's hands. And with the economy on life support, what are the odds no other big company needs (or wants) some federal cash before Jan. 20? It may be late December. But on Wall Street, at least, Santa Claus has nothing on good old Uncle Sam.