Another brutal year for liberty

The good news is that it's clear what the Obama administration must do to end the decade-long war on the Constitution. 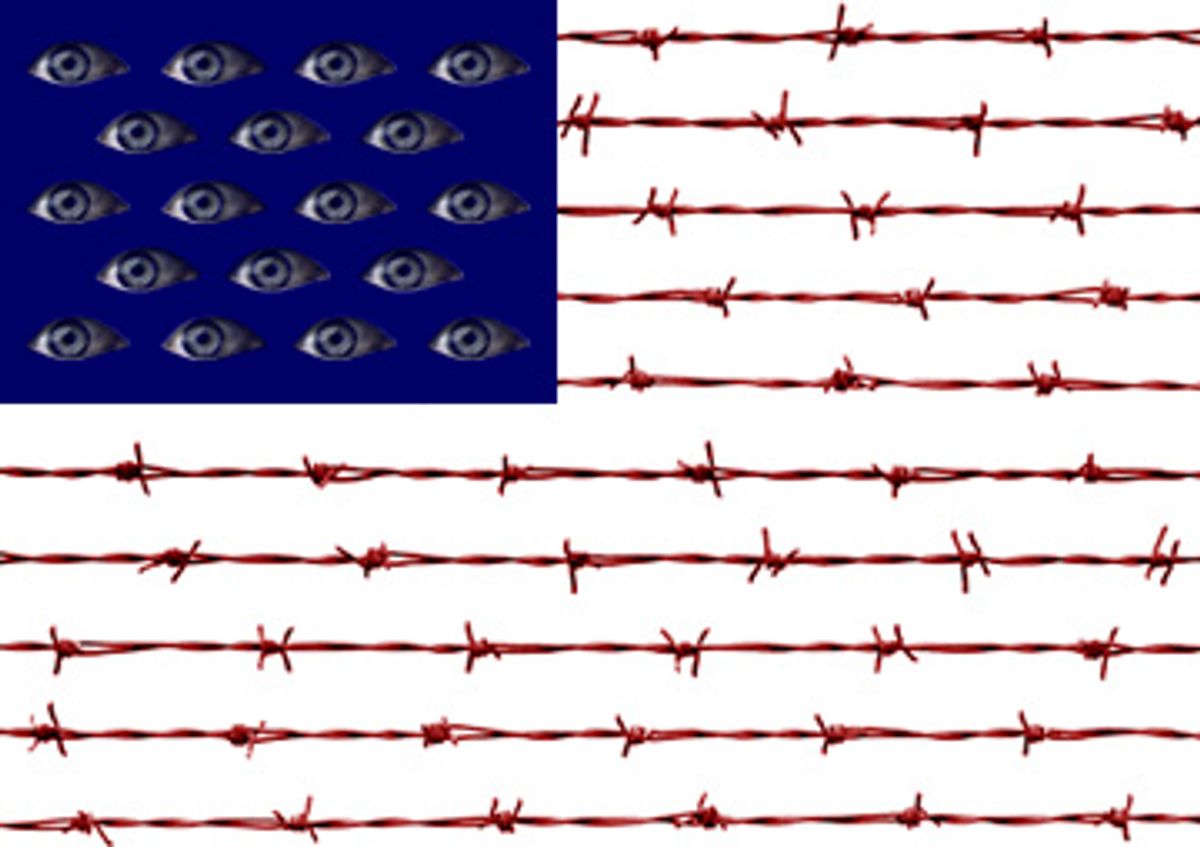 Befitting an administration that has spent eight years obliterating America's core political values, its final year in power -- 2008 -- was yet another grim one for civil liberties and constitutional protections. Unlike the early years of the administration, when liberty-abridging policies were conceived of in secret and unilaterally implemented by the executive branch, many of the erosions of 2008 were the dirty work of the U.S. Congress, fueled by the passive fear or active complicity of the Democratic Party that controlled it. The one silver lining is that the last 12 months have been brightly clarifying: It is clearer than ever what the Obama administration can and must do in order to arrest and reverse the decade-long war on the Constitution waged by our own government.

The most intensely fought civil liberties battle of 2008 -- the one waged over FISA and telecom immunity -- ended the way most similar battles of the last eight years have: with total defeat for civil libertarians. Even before Democrats were handed control of Congress at the beginning of 2007, the Bush administration had been demanding legislation to legalize its illegal warrantless NSA eavesdropping program and to retroactively immunize the telecom industry for its participation in those programs. Yet even with Bill Frist and Denny Hastert in control of the Congress, the administration couldn't get its way.

Not even the most cynical political observer would have believed that it was the ascension of Harry Reid and Nancy Pelosi that would be the necessary catalyst for satisfying Bush's most audacious demands, concerning his most brazenly illegal actions. If anything, hopes were high that Democratic control of Congress would entail a legislative halt to warrantless eavesdropping or, at the very least, some meaningful investigation and disclosure -- what we once charmingly called "oversight" -- regarding what Bush's domestic spying had really entailed. After all, the NSA program was the purified embodiment of the most radical attributes of a radical regime -- pure lawlessness, absolute secrecy, a Stasi-like fixation on domestic surveillance. It was widely assumed, even among embittered cynics, that the new Democratic leadership in Congress would not use their newfound control to protect and endorse these abuses.

Yet in July 2008, there stood Pelosi and Reid, leading their caucuses as they stamped their imprimatur of approval on Bush's spying programs. The so-called FISA Amendments Act of 2008 passed with virtually unanimous GOP and substantial Democratic support, including the entire top level of the House Democratic leadership. It legalized vast new categories of warrantless eavesdropping and endowed telecoms with full immunity for prior surveillance lawbreaking. Most important, it ensured a permanent and harmless end to what appeared to be the devastating scandal that exploded in 2005 when the New York Times revealed to the country that the Bush administration was spying on Americans illegally, without warrants of any kind.

With passage of the Act, Democrats delivered to the Bush administration everything it wanted -- and more. GOP Sen. Kit Bond actually taunted the Democrats in the Times for giving away the store: "I think the White House got a better deal than they even had hoped to get." Making matters much worse, by delivering this massive gift to the White House, the House undid one of its very few good deeds since taking over in 2006: its galvanizing February 2008 refusal to succumb to Bush's rank fear-mongering by allowing "The Protect America Act" to expire instead of following the Senate's lead in making it permanent.

Adding the final insult to this constitutional injury, Barack Obama infamously violated his emphatic pledge, made during the Democratic primary, to filibuster any bill containing telecom immunity. With the Democratic nomination fully secured, Obama blithely tossed that commitment aside, instead joining his party's leadership in voting for cloture on the bill -- the opposite of a filibuster -- and then in favor of the bill itself. The photographs of the celebratory, bipartisan signing ceremony that followed at the White House -- where an understandably jubilant George Bush and Dick Cheney were joined by a grinning Jay Rockefeller, Jane Harman and Steny Hoyer -- was the vivid, wretched symbol of what, in 2008, became the fully bipartisan assault on America's basic constitutional guarantees and form of government.

The FISA fight was the destructive template that drove virtually every other civil liberties battle of the last year. Time and again, Democrats failed to deliver on a single promise. They failed to overcome a GOP filibuster in the Senate to restore habeas corpus, which had been partially abolished in 2006 as a result of the Military Commissions Act that passed with substantial Democratic support and wholesale Democratic passivity. Notably, while Senate Democrats, when in the minority, never even considered a filibuster to block the Military Commissions Act, it was simply assumed that the GOP, when it was in the minority, would filibuster in order to prevent passage of the Habeas Restoration Act. And filibuster they did.

A similar scenario played out with the attempt in February to redress America's torture crisis by enacting an amendment to the Defense Authorization Act compelling all government agencies, including the CIA, to comply with the Army Field Manual when interrogating detainees. The most immediate effect of such a law would have been to impose an absolute ban on the use of waterboarding, along with any other coercive tactics -- torture techniques -- which the Manual does not explicitly authorize.

Knowing that the president would veto the bill, the GOP allowed a floor vote on the Army Field Manual amendment. Signaling what would be his year-long, soul-selling captivity to the far right of his party, John McCain -- despite years of parading around as a righteous opponent of torture -- voted against the torture ban. The bill passed both houses largely along party lines, President Bush vetoed it as promised, and the House then failed to override the veto. The path taken was slightly different, but the outcome was the same: total failure in reining in Bush's abuses. Indeed, by the end of 2008, civil libertarians could point to many defeats suffered in the Democratic-controlled Congress, but not a single victory.

The fate of civil liberties in the judiciary was much more mixed, punctuated with several significant victories. Undoubtedly the most important win was the Supreme Court's June decision in the Boumediene case, which struck down as unconstitutional one of the worst constitutional assaults of the Bush era: Section 7 of the Military Commissions Act, which had purported to abolish habeas corpus for Guantánamo detainees and prohibited them from challenging their detention in a federal court.

The Court ruled, by a precarious 5-4 margin, that Guantánamo detainees could not constitutionally be denied the right to have their detentions reviewed by an American federal court. That seminal ruling paid quick dividends for some of the detainees. Last month, a Bush 43 federal judge -- the same jurist who had originally upheld the Act's abolition of habeas review for Guantánamo detainees and was ultimately reversed by the Boumediene court -- conducted a habeas hearing for six Algerian-Bosnian detainees imprisoned without charges at Guantánamo for the last six years.

The judge concluded that the Bush administration had no credible evidence to justify the detention of five out of the six detainees and thus ordered them released immediately. Four of the five are now back in Bosnia, while the fifth awaits release. Without the Boumediene ruling, the truly heinous provisions of the Military Commissions Act would still be operative and would continue to empower the government to hold those detainees -- along with dozens if not hundreds of others -- indefinitely and without charges. Boumediene is one of the few civil liberties bright spots of this decade.

The Bush administration, also earlier this year, suffered another judicial defeat at the hands of a very conservative, Bush 43-appointed federal judge, when that judge emphatically rejected the administration's claim that Bush aides Harriet Miers (former White House counsel) and Josh Bolten (former White House chief of staff) are entitled to absolute immunity from Congressional subpoenas. That dispute, which arose from the House Judiciary Committee's efforts to investigate the notorious firing of nine U.S. attorneys, dispensed with one of the administration's most radical tools -- a claim of absolute, unconstitutional executive privilege -- for shielding itself from accountability.

One of the most potentially damaging judicial developments of the year was a horrendous ruling issued in July by the conservative Fourth Circuit Court of Appeals in the case of Ali Saleh Kahlah al-Marri. The al-Marri court actually upheld the president's claimed authority to detain legal residents and even U.S. citizens in a military prison as "enemy combatants," rather than charge them in a civilian court with a crime. But the damage done by that ruling was mitigated substantially when the U.S. Supreme Court announced just two weeks ago that it has agreed to review the al-Marri ruling, and civil libertarians are cautiously optimistic that the Court will likely reverse it.

For the last seven years, Democrats have repeatedly cited GOP political dominance to excuse their wholesale failures to limit, let alone reverse, the devastating war waged by the Bush administration on America's core liberties and form of government. With a new Democratic president and large majorities in both Congressional houses, those excuses will no longer be so expedient. As dark and depressing as these last seven years have been for civil libertarians, culminating in an almost entirely grim 2008, there is no question that the Obama administration and the Democrats generally now possess the power to reverse these abuses and restore our national political values. But as the events of the last 12 months conclusively demonstrate, there are substantial questions as to whether they have the will to do so.