Extreme emotional and cultural identification with one side leads people to believe that X is good when done by them and evil when done to them.

Former McCain-Palin campaign spokesman and current Weekly Standard editor Michael Goldfarb notes that Israel, a couple of days ago, dropped a 2,000-pound bomb on a Gazan home which killed a top Hamas leader . . . in addition to 18 others, including his four wives and nine of his children.  About the killing of those innocent civilians, Goldfarb writes (h/t John Cole via email):

The fight against Islamic radicals always seems to come around to whether or not they can, in fact, be deterred, because it's not clear that they are rational, at least not like us. But to wipe out a man's entire family, it's hard to imagine that doesn't give his colleagues at least a moment's pause. Perhaps it will make the leadership of Hamas rethink the wisdom of sparking an open confrontation with Israel under the current conditions.

That, of course, is just a slightly less profane version of Marty Peretz's chest-beating proclamation that the great value of the attack on Gaza is to teach those Arabs a lesson:  "do not fuck with the Jews."

There are few concepts more elastic and subject to exploitation than "Terrorism," the all-purpose justifying and fear-mongering term.  But if it means anything, it means exactly the mindset which Goldfarb is expressing:  slaughtering innocent civilians in order to "send a message," to "deter" political actors by making them fear that continuing on the same course will result in the deaths of civilians and -- best of all, from the Terrorist's perspective -- even their own children and other family members. 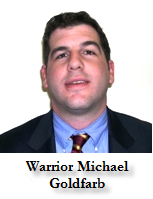 To the Terrorist, by definition, that innocent civilians and even children are killed isn't a regrettable cost of taking military action.  It's not a cost at all.  It's a benefit.   It has strategic value.  Goldfarb explicitly says this:  "to wipe out a man's entire family, it's hard to imagine that doesn't give his colleagues at least a moment's pause."

One should be clear that this sociopathic indifference to (or even celebration over) the deaths of Palestinian civilians isn't representative of all supporters of the Israeli attack on Gaza.  It's unfair to use the Goldfarb/Peretz pathology to impugn all supporters of the Israeli attack.  It's certainly possible to support the Israeli offensive despite the deaths of these civilians, to truly lament the suffering of innocent Palestinians but still find the war, on balance, to be justifiable.

Those who favor the attack on Gaza due to that calculus are certainly misguided about the likely outcome.  And many war supporters who fall into this more benign category are guilty of insufficiently weighing the deaths of Palestinian innocents and, relatedly, of such overwhelming emotional and cultural attachment to Israel and Israelis that they long ago ceased viewing this conflict with any remnant of objectivity.

I can't express how many emails I've received in the last week from people identifying themselves as "liberals" (and, overwhelmingly, American Jews); telling me that they agree with my views in almost all areas other than Israel; and then self-righteously insisting that I imagine what it's like to live in Southern Israel with incoming rocket fire from Hamas, as though that will change my views on the Israel/Gaza war.  Obviously, it's not difficult to imagine the understandable rage that Israelis feel when learning of another attack on Israeli civilians, in exactly the way that American rage over the 9/11 attacks was understandable.  But just as that American anger didn't justify anything and everything that followed, the fact that there are indefensible attacks on Israeli civilians doesn't render the (far more lethal) attacks on Gaza either wise or just -- as numerous Jewish residents of Sderot themselves are courageously arguing in opposing the Israeli attack.

More to the point:  for those who insist that others put themselves in the position of a resident of Sderot -- as though that will, by itself, prove the justifiability of the Israeli attack -- the idea literally never occurs to them that they ought to imagine what it's like to live under foreign occupation for 4 decades (and, despite the 2005 "withdrawal from Gaza," Israel continues to occupy and expand its settlements on Palestinian land and to control and severely restrict many key aspects of Gazan life).  No thought is given to what it is like, what emotions it generates, what horrible acts start to appear justifiable, when you have a hostile foreign army control your borders and airspace and internal affairs for 40 years, one which builds walls around you, imposes the most intensely humiliating conditions on your daily life, blockades your land so that you're barred from exiting and prevented from accessing basic nutrition and medical needs for your children to the point where a substantial portion of the underage population suffers from stunted growth.

So extreme is their emotional identification with one side (Israel) that it literally never occurs to them to give any thought to any of that, to imagine what it's like to live in those circumstances.  Nor does this thought occur to them:

I was trained from an early age to view this group as my group, to identify with them emotionally, culturally, religiously.  Maybe that -- and not an objective assessment of these events -- is why I continuously side with that group and see everything from its perspective and justify whatever it does, why I find the Dick Cheney/Weekly Standard/neoconservative worldview repellent in every situation except when it comes to Israel, when I suddenly find it wise and vigorously embrace it.

Those who defend American actions in every case, or who find justification in attacks on Israeli civilians, or who find simplistic moral clarity in a whole range of other complex and protracted disputes where all sides share infinite blame, are often guilty of the same refusal/inability to at least try to minimize this sort of ingrained tribalistic blindness.

Still, there is a substantial difference between, on the one hand, basically well-intentioned people who are guilty of excessive emotional and cultural identification with one side of the dispute and, on the other, those who adopt the Goldfarb/Peretz psychopathic derangement of belittling rage over widespread civilian deaths as mere "whining" or even something to view as a strategic asset.  The latter group is a subset of war supporters and evinces every defining attribute of the Terrorist.

Those who giddily support not just civilian deaths in Gaza but every actual and proposed attack on Arab/Muslim countries -- from the war in Iraq to the Israeli invasion of Lebanon to the proposed attacks on Iran and Syria and even continued escalation in Afghanistan -- are able to do so because they don't really see the Muslims they want to kill as being fully human.  For obvious reasons, one typically finds this full-scale version of sociopathic indifference -- this perception of brutal war as a blood-pumping and exciting instrument for feeling vicarious sensations of power and strength from a safe distance -- in the society's weakest, most frightened, and most insecure individuals.

Here's right-wing blogger (and law professor) Glenn Reynolds revealing that wretched mindset for all to see:

“Cycles of violence” continue until one side wins decisively.  Personally, I’d rather that were the Israelis, since they’re civilized people and not barbarians.

Or, as Goldfarb put it:  "it's not clear that they are rational, at least not like us."

If you see Palestinians as something less than civilized human beings:  as "barbarians" -- just as if you see Americans as infidels warring with God or Jews as sub-human rats -- then it naturally follows that civilian deaths are irrelevant, perhaps even something to cheer.  For people who think that way, arguments about "proportionality" won't even begin to resonate -- such concepts can't even be understood -- because the core premise, that excessive civilian deaths are horrible and should be avoided at all costs, isn't accepted.  Why should a superior, civilized, peaceful society allow the welfare of violent, hateful barbarians to interfere with its objectives?  How can the deaths or suffering of thousands of barbarians ever be weighed against the death of even a single civilized person?

So many of these conflicts -- one might say almost all of them -- end up shaped by the same virtually universal deficiency:  excessive tribalistic identification (i.e.:  the group with which I was trained to identify is right and good and just and my group's enemy is bad and wrong and violent), which causes people to view the world only from the perspective of their side, to believe that X is good when they do it and evil when it's done to them.  X can be torture, or the killing of civilians in order to "send a message" (i.e., Terrorism), or invading and occupying other people's land, or using massive lethal force against defenseless populations, or seeing one's own side as composed of real humans and the other side as sub-human, evil barbarians.  As George Orwell wrote in Notes on Nationalism -- with perfect prescience to today's endless conflicts (h/t Hume's Ghost):

All nationalists have the power of not seeing resemblances between similar sets of facts. A British Tory will defend self-determination in Europe and oppose it in India with no feeling of inconsistency. Actions are held to be good or bad, not on their own merits, but according to who does them, and there is almost no kind of outrage — torture, the use of hostages, forced labour, mass deportations, imprisonment without trial, forgery, assassination, the bombing of civilians — which does not change its moral colour when it is committed by ‘our’ side ... The nationalist not only does not disapprove of atrocities committed by his own side, but he has a remarkable capacity for not even hearing about them

For those who evaluate moral questions from that blindingly self-regarding perspective, anything and everything becomes easily justifiable.

UPDATE:  The Israeli Supreme Court several days ago ordered the Government to allow reporters into Gaza, yet Israel continues to block all journalists from entering.  The reason, as casual_observer notes in comments, is clear:

The reason Israel has done this must be that they will do whatever they must--including ignoring their own high court--to limit evidence that Gazans are indeed human beings and that they are suffering the horrors that occur when war is unleashed on densely-packed urban civilians.

Israel knows full well that reporting from Gaza turns Gazans from vague abstractions to suffering human beings. And they will not allow that reality to be communicated to the world.

Especially in the American media, there is a constant focus on the effects on civilians from the rocket attacks on Southern Israelis -- as well there should be, since that is an important part of the debate.  But everyone should also be permitted to view the devastating effects on actual human beings from these Israeli bombing and artillery raids in Gaza.  This truly horrific video -- purportedly of a recent Israeli bombing of a civilian Gazan market -- has been widely cited.  I can't and don't vouch for its authenticity (UPDATE:  there's good reason to believe it's not from an Israeli attack), but it's certainly reflective of the carnage in Gaza.  It's much easier to undervalue the suffering imposed on The Other when you don't have to see it.