To Hillary, with love 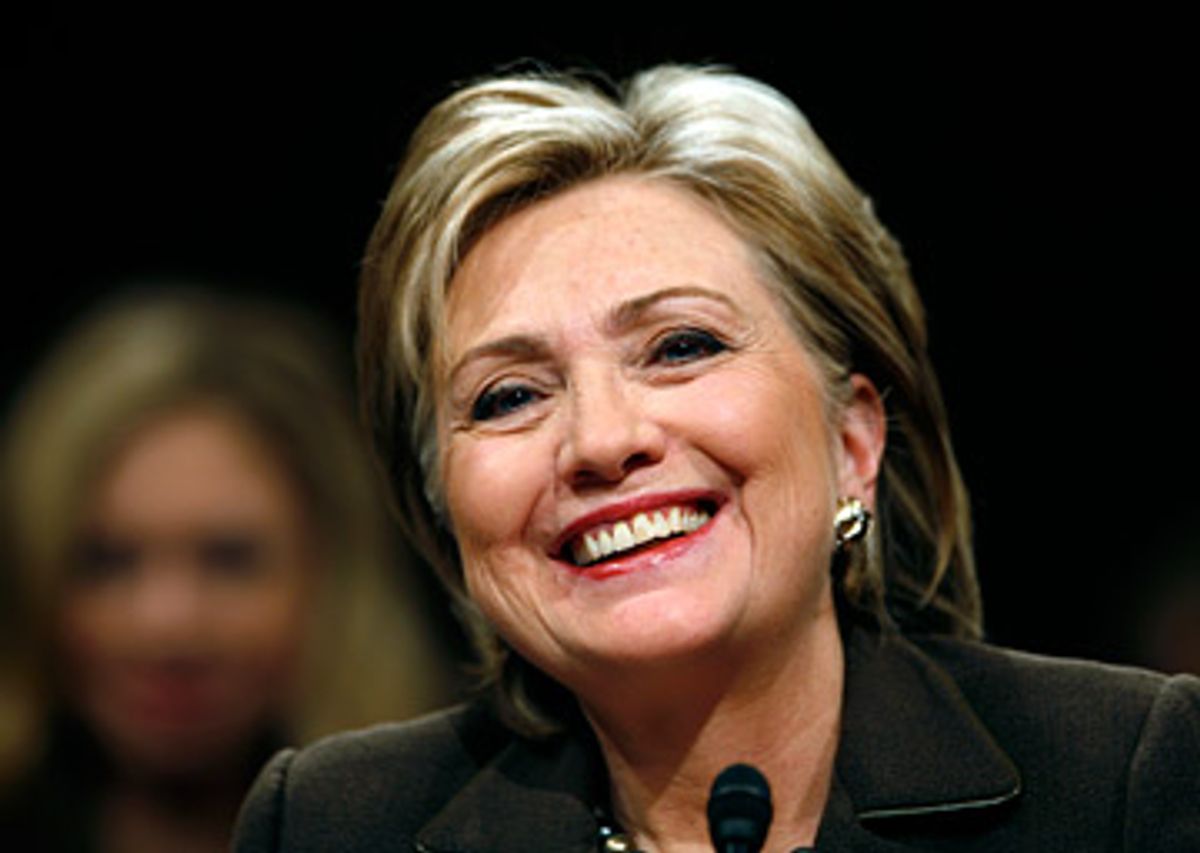 To listen to John Kerry, the gathering in the Hart Senate Office Building Tuesday wasn't so much a confirmation hearing as it was a meeting of the runners-up club. "This is an historic moment for this committee," Kerry said, opening what would become nearly five hours of kid-glove treatment of Hillary Clinton, Barack Obama's pick to be secretary of state. "For the first time in American history, one of our members will be sworn in as president and another one as vice president. Before any of the newer members of our committee get too excited about future prospects, let Dick Lugar, Chris Dodd, and myself -- and perhaps even Hillary will join in this -- in saying, trust us, it ain't automatic."

Not long after that, Kerry was at it again. "Mr. President," Clinton began to address him, as she answered a question. "I'll take that," Kerry answered. "Mr. President-elect ... Mr. Chairman -- it was a Freudian slip," she corrected herself. "We're both subject to those, I want you to know," Kerry said. "Yes, indeed, indeed, on this subject, especially," Clinton agreed, laughing.

Other than when Kerry raised the subject, though, the hearing was mostly free of any awkwardness over who did or didn't want to be president -- or even over people who have already been president, like Clinton's husband (who, no doubt wisely, didn't show up to provide the mandatory photo-op of the dutiful spouse sitting behind the nominee, leaving Chelsea Clinton to handle the job of supportive family member all by herself). Sure, a few Republicans pressed Clinton over the rules for disclosure and vetting of donations to Bill Clinton's foundation, but they did it pretty meekly; Kerry all but ended any would-be drama over the fate of her nomination when he announced that the committee would vote Thursday, which didn't exactly indicate an ongoing behind-the-scenes battle. And Clinton herself, despite some speculation beforehand that her past differences with her new boss would come up, had no trouble speaking for Obama, making clear who would be making the foreign-policy decisions in the administration. (She referred to "President-elect Obama" or "the president-elect" 18 times during her opening statement alone.)

"Foreign policy must be based on a marriage of principles and pragmatism, not rigid ideology, on facts and evidence, not emotion or prejudice," Clinton said. "We must use what has been called smart power, the full range of tools at our disposal -- diplomatic, economic, military, political, legal, and cultural -- picking the right tool or combination of tools for each situation. With smart power, diplomacy will be the vanguard of our foreign policy." That last line drew applause from some spectators, after years of an administration that has often given the impression it considers the Army's 10th Mountain Division to be the vanguard of U.S. foreign policy. Even a delegation of protesters from Code Pink, the peace group that has frequently interrupted hearings to shout at architects of George W. Bush's foreign policy, stayed timid through most of the hearing, standing up to ask Clinton to support a cease-fire in Gaza only after Kerry had gaveled the hearing closed for a lunch break. (They walked out singing some sort of hymn to the people of Gaza, complete with elaborate lilting harmonies.)

On that issue, which seems to divide the Democratic congressional delegation from much of the party's progressive base, Clinton -- and, by extension, Obama -- seem to be firmly on Israel's side. Clinton said the Obama administration would be "deeply sympathetic" to Israel's "desire to defend itself under the current conditions, and to be free of shelling by Hamas rockets." She did say the Gaza war had racked up "tragic humanitarian costs" and caused suffering among Israelis and Palestinians alike. But that sentiment may not indicate much of a break with current U.S. policy, which is overwhelmingly supportive of Israel. (Obama hasn't said much about the war himself, apparently preferring to let it remain Bush's problem as long as possible, but made repeated comments during the campaign supportive of Israel's right to defend itself against Hamas rockets.)

On other issues, the preview Clinton offered of the next few years of foreign policy did sound different from the last few. Obama would, Clinton said, end the war in Iraq and devote more resources to Afghanistan as soon as possible. The U.S. will work with allies to design "global solutions" to deal with "global threats," and try to extend nuclear non-proliferation and reduction treaties. From China to Russia to Iran to Syria, the U.S. will try to engage with countries the Bush administration has sometimes been quick to shun. Latin America and Africa didn't get too much attention in Clinton's statement, but she did promise more engagement there, too.

Listening to the hearing as it wore on, though, you could be forgiven for thinking the most important person in the room wasn't Clinton, sitting at the witness table, but instead one of the folks on the other side of the dais. (Which, as far as they were concerned, was probably the case.) Most members of the Senate Foreign Relations Committee spent their ten minutes of questions on their own particular pet issues. So California Democrat Barbara Boxer asked Clinton what the new administration would do to prevent sex trafficking and violence against women around the world, showing graphic posters of victims of horrific crimes to make her point. New Jersey Democrat Bob Menendez, a Cuban-American, asked about the upcoming Summit of the Americas. And Alaska Republican Lisa Murkowski asked Clinton about "the role we can play as an Arctic nation" (you know, from which you can see Russia). Things went so far in the hobbyhorse direction that Kerry felt compelled to remind the press and anyone else watching that the committee had already submitted -- and Clinton had already answered -- more than 100 questions in writing, on a wide range of subjects.

The closest anyone got to aggressive questioning came on the subject of Bill Clinton's charitable supporters. Indiana Republican Dick Lugar, the top GOP member of the committee, asked Clinton to consider changing the agreement worked out with Obama's transition team before her appointment was announced, which governs the rules for disclosing contributions to Clinton's foundation. Since its list of benefactors who have given at least $1 million includes the kingdom of Saudi Arabia, the state of Kuwait, the state of Qatar and the sultanate of Oman, there's reasonable cause for asking questions about conflicts of interest when Hillary Clinton starts talking Middle East policy with those donors. The complete list of donors, made public last month, runs 2,922 pages. Slate's Christopher Hitchens, never a Clinton fan, has launched a crusade against her nomination because of the foundation. But Clinton never faced much more heat than a plea from Louisiana Republican David Vitter for "more clarification" of the disclosure rules, which she basically shrugged off. (Florida Democrat Bill Nelson even took time out from his questioning to say he thought Bill Clinton's foundation had done "such good things all over the world.")

Of course, there was a time, not that long ago, when the thought of Hillary Clinton appearing before a Congressional committee would have immediately conjured up visions of subpoenas and court fights and endless political battles over what topics would be off-limits. What a difference eight years in the Senate makes; lawmakers never show more deference to a nominee than they do to a nominee who still, technically, serves with them. (Her narrow loss in the primary campaign and, finally, the fact that she was Obama's pick didn't appear to hurt, either.) If only the rest of the world would prove to be as easily dazzled as her soon-to-be-former colleagues, Clinton's job changing global perceptions of the U.S. on Obama's behalf would be a slam-dunk.