Can't we all just get along?

As Biden and Clinton say goodbye, the Senate's Democratic majority girds for ... collegiality. 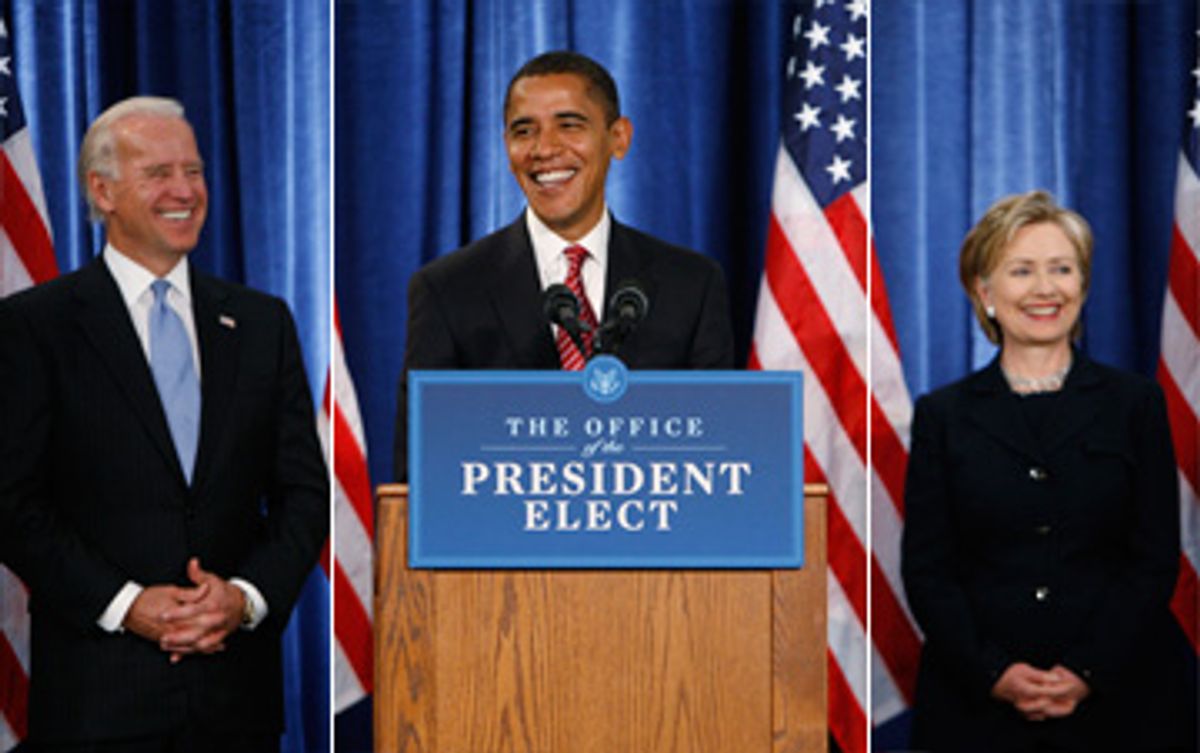 Joe Biden and Hillary Clinton said goodbye to the Senate Thursday, in the only ways either of them knew how. For Biden, that meant a rambling, sentimental farewell speech that included impressions of long-dead Senate legends, a hefty dose of soft-focus history and enough of his patented rhetorical tics that anyone listening could tell he wasn't using a prepared text. And for Clinton, right afterward, that meant a careful, on-message, bulleted list of her accomplishments all around New York state, ticking off the exact number of state fairs (eight), parades (45) and counties (62) she'd visited along the way.

Both of them, for anyone who hasn't been paying attention to the news, may be a little busier come Tuesday. Biden becomes Barack Obama's vice president, of course, and Clinton -- whose nomination as secretary of state was approved by a Senate committee just before she spoke -- should move to her new digs in Foggy Bottom soon afterward. Biden will be replaced in the Senate by a longtime advisor, Ted Kaufman; Clinton's successor is still being determined, in what is rapidly becoming a far more entertaining comedy/drama than anything Hollywood (or the local industry, Broadway) has churned out lately. Another Obama Cabinet pick, Colorado's Ken Salazar, will leave the Senate soon, as well, to become interior secretary.

But that doesn't mean the Obama administration will be finished worrying about the Senate any time soon. The chamber, with its largest Democratic majority in years -- only one shy of a filibuster-proof 60 votes, assuming Minnesota's Al Franken is eventually sworn in -- could make or break huge parts of the new president's agenda, depending on how well Majority Leader Harry Reid holds his caucus together and how uncooperative Republicans decide to be. (It should be easier to jam legislation through the House, where Democrats hold an even larger edge, thanks to the different rules in each chamber and the more liberal inclinations of many House Democrats.) "The Senate, as an institution, always causes angst," Robert Borosage, co-director of the Campaign for America's Future, a progressive think tank in Washington, said with a sigh.

That's in part because of the rules, which allow a determined minority to slow legislation to a crawl with only 40 votes. But it's also in part due to the clubby atmosphere its members love so much -- which Biden spent much of his speech praising. "Every good thing I have seen happen here, every bold step taken in the 36-plus years I have been here, came not from the application of pressure by interest groups, but through the maturation of personal relationships," he said. "Pressure groups can be and are strong and important advocates. But they're not often vehicles for compromise. A personal relationship is what allows you to go after someone hammer and tong on one issue and still find common ground on the next. It is the grease that lubricates this incredible system we have."

Biden clearly loves -- and always will love -- the Senate, which he joined in 1973, when he was just barely the 30 years old the Constitution requires to serve there. He told stories of meeting the "old bulls" who used to run the place, imitating Mississippi Democrat John Stennis, once a staunch segregationist who softened his stance later in life, and whose office Biden inherited when Stennis retired. And he waxed on about the friendships he made with people -- like Stennis, or Jesse Helms, or Strom Thurmond -- whom he had very little in common with politically. "Our ability to work together with people with whom we have real and deep and abiding disagreements, especially in these consequential times, I believe is going to determine whether or not we succeed in restoring America," he said. "I think it is literally that fundamentally basic."

Clinton was a little less effusive about the joys of working with Republicans, but she, too, reflected on moments of unity over her eight years in the Senate. She looked back at the aftermath of the 9/11 attacks, and the anthrax attacks not long after. "I see what we did together ... and remember with such incredible gratitude how we all came together," she said. "We should not only come together with that level of connection and commitment in time of disaster. This is an opportunity for us to pull together with the new administration to make a real difference, a lasting difference for our nation."

That conciliatory impulse, though, is part of what often drives progressives crazy about the Democratic-run Senate. The drive to compromise -- and the frequent refusal to play hardball politics -- that the institution inspires in its members sometimes means frustration for anyone who wants Congress to push harder for liberal priorities. Before Biden and Clinton spoke, Reid and his GOP counterpart, Mitch McConnell, spent Thursday morning pledging to play nicely this year; next week, the Senate will debate a measure to end wage discrimination against women, and both sides say they'll work together. (That doesn't have to mean Republican victories -- Thursday afternoon, the Senate agreed to release the $350 billion in emergency financial funds that Obama had requested, despite overwhelming objections from the GOP.)

Reid, in particular, comes in for criticism from the Netroots these days, for being unwilling -- or, some liberal bloggers increasingly believe -- unable to shove Republicans around to get things done. Democratic aides and Republican aides alike on Capitol Hill have been joking that Reid was outmaneuvered by Rod Blagojevich, resulting in -- by midday Thursday -- the official arrival in Washington of Sen. Roland Burris, D-Ill. "If Republicans were truly smart, they'd give Reid an electoral pass," Markos Moulitsas wrote on Daily Kos last week. "He's the best thing Republicans have going for them in the entire Congress."

Other progressives are a little less harsh. "The leadership of both parties has been slow to adjust to the new realities -- the new realities of the economy, the new realities of the new administration and the new realities of a (large) Democratic majority," said Borosage, who thinks the new Congress may actually surprise liberals by being more aggressive in nudging Obama to the left than it has been so far. Look at the Senate Judiciary Committee, Borosage said, where Vermont Democrat Patrick Leahy, the chairman, pushed Obama's attorney general-designate, Eric Holder, on Thursday to condemn waterboarding as torture and to rule out preemptive declarations of immunity for officials who ordered it.

And senior Democratic aides say Reid's nice talk with McConnell doesn't mean he'll be a pushover. "It's not just Reid," one aide pointed out. "President-elect Obama wants to govern in a way where we're not just getting 60 votes -- he wants 60, 70, 80 votes on bills. He wants to actually build a broad consensus on this country." If Republicans are willing to work with Democrats without blocking Obama's agenda, that's great. If not, the new Harry Reid won't necessarily hold back. "Might there be issues where Republicans are being so intransigent that we're going to have to do what we have to do just to pass the Senate? Yes," the aide said.

Between now and February, Democrats should have plenty of opportunities to back up that tough talk. The pay equity bill and one on children's healthcare will be debated in the next couple of weeks, but after that, Congress will move into the heart of Obama's economic stimulus plan, which Obama aides say must pass as soon as possible. That's already caused some problems -- just with Democrats. Forcing Republicans to go along with it could be a tough job. But somebody -- despite the chummy atmosphere that Biden and Clinton saluted Thursday -- might have to do it.