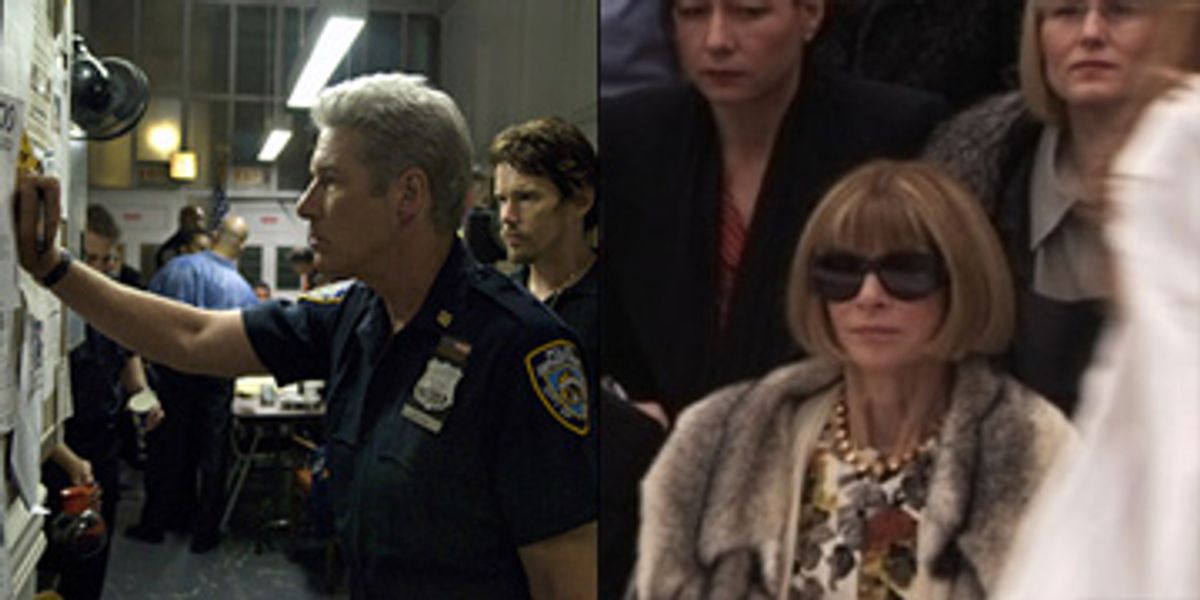 PARK CITY, Utah -- None of the usual musing and pondering from me this time; it's time for some discipline around here. As I write this, it's midnight on the Saturday of a crazy-busy Sundance weekend. Partygoers are just getting cranked up, but I've been going since early morning and before I crash out I've got to file this piece and watch a little of a Slamdance entry called "I Sell the Dead." I don't know, it just seemed like a great thing to watch when I'm all alone in a second-rate condo on an isolated mountain road in the dead of winter.

So with the proviso that all these things deserve more attention than they're getting, I've got one news update and several movie premieres of greater or lesser merit to discuss. First off, some readers have raised the question of whether I or Salon or anybody with something approaching a conscience should be gracing the Beehive State with our presence this year after the Mormon church's much-publicized support for California's Prop. 8. Rather than just brushing away the question in high-handed fashion (well, OK, I did that too), I dropped by the GLAAD-hosted Queer Lounge on Main Street on Saturday -- always one of Park City's best vibes -- to swill a pomegranate soda and talk to folks there about it.

I'm paraphrasing here, but basically GLAAD decided to come back to Park City this year because Sundance and Slamdance have been historically friendly places for lesbian/gay films and filmmakers, and because the gay community in Utah asked them to. If that sounds like a joke it totally isn't; Salt Lake City (which is just half an hour away and hosts many Sundance screenings and events) has a booming gay and lesbian scene, and Park City is after all an international resort destination. It's true that the rest of the state is predominantly Mormon and conservative, but boycotting Sundance would disproportionately hurt the most progressive Utah communities.

Now to this weekend's extremely tasty batch of new films, in descending order of perceived newsworthiness:

"Spread" This guilty pleasure premiered to a packed house on Saturday night and was pretty much a smash. "Spread" is the first American-made movie for fast-rising Scottish director David Mackenzie ("Asylum" and "Mister Foe") and it stars Ashton Kutcher as a Hollywood gigolo who makes a living by latching on, literally and figuratively, to older women. I'm not even going to try to make some joke connecting that to Kutcher's real love life because A) I bet somebody's already come up with a killer line about that, and B) Kutcher's love life actually bears no relationship to this film.

Kutcher turns out to have terrific acting chops well beyond the doofus self-mockery of his TV-host and pitchman personas. His character, Rikki, is an all-American pretty boy grown worldly-wise before his years, who narrates part of the movie after the fashion of William Holden in "Sunset Boulevard." Although that's a definite influence it's not a spoiler (i.e., Rikki isn't dead). An impressive inverted triangle of gym-toned muscle but not exactly the brightest bulb in the palm tree, Rikki at first seems to have all the morals and all the insight of a great white shark. He spots a single, long-legged, pushing-40 professional woman in a nightclub (it's Anne Heche). Confirming that she's got a house in the Hollywood hills and a Mercedes SUV, he moves in for the kill.

As calculated as Rikki's entire approach is -- he has rules for first-night sex (not too good), for how to wake up the first morning (don't) and for a self-scored points system that gradually ensnares the victim (cooking her dinner is good, but cooking her a bad dinner is better) -- a few micrograms of his soul are still swimming around in there. Otherwise there wouldn't be a story to tell. Mackenzie delivers that story as a blend of sex comedy, dark satire, and morality tale that recalls various aspects of "Shampoo" and "Less Than Zero" and "The Graduate," but has a couple of nifty surprises and a poisonous sting in its tail that's all its own. Heche is tremendous in a difficult role, but Margarita Levieva is too much of a cipher as the eventual Perfect Girl who captures Rikki's heart and turns his thoughts away from courtesanship.

There'll be more to say about this movie, qua movie, in due course. For now, even in a down market it'll be a hot acquisition target. As I left the screening I watched some guy make a beeline across the parking lot, talking fast into his phone in his lower-middle-class English accent about how "Mick" had to drop whatever he was doing on Sunday morning  and come see this " really fucking good movie." I have no idea what Mick he was talking to or about, but hop to it, mate. Time's a-wasting.

"Brooklyn's Finest" A dark, deterministic cop opera that verges on self-caricature at times, this is also a mightily impressive visual spectacle that re-establishes director Antoine Fuqua's claim to be the hip-hop generation's heir to Martin Scorsese. Focusing on a trio of troubled New York cops, each devoured by the job in different ways, whose paths eventually intersect by accident, "Brooklyn's Finest" is a brooding, violent, slow-digesting tragedy of considerable power, if not quite the crackerjack narrative intensity of Fuqua's 2001 "Training Day."

For my money, Richard Gere gives one of his best performances in years as an embittered, depressed beat cop in his last week before retirement, fighting a losing battle against his own disgust and apathy. Ethan Hawke, although surrendering to a hackneyed "yo, Vinny" Italian-American accent, provides a complicated portrayal of a family man and star narcotics officer who uses his position to steal drug money and mete out vigilante justice. Don Cheadle, excellent as always, plays a star detective who's gone way too deep undercover inside a drug gang in Brooklyn's most dangerous projects.

Fuqua's dandy supporting cast includes Wesley Snipes, also doing his best work in years as a charismatic drug lord with an amazing wardrobe, and Ellen Barkin, who gets just two scenes as a queen-bitch FBI agent and eats them whole. But if Fuqua is unusually skilled at unleashing actors, he has more trouble managing scripts, and I think this one (by Michael C. Martin and Brad Caleb Kane) gets away from him, becoming a construction just as mechanical as "Crash," if far more fatalistic. A simple edit would fix one of the biggest problems, but more on that later. Worth seeing flaws and all, and you should get your chance pretty soon. (UPDATE: Since I first posted this, "Brooklyn's Finest" has been acquired by Senator Entertainment, a new company backed by German money and headed by former THINKFilm president Mark Urman.)

"The September Issue" Delicious would be the best word for reality-TV pioneer R.J. Cutler's documentary look inside the production of the fashion world's annual bible, the September issue of Vogue. Editor Anna Wintour, the legendary fashion sphinx burlesqued in "The Devil Wears Prada," granted Cutler and his crew amazing access throughout what's nearly a nine-month process. We travel to haute-couture shows and photo shoots, private breakfasts with major advertisers, and even into Wintour's office for her tense aesthetic and financial standoffs with Grace Coddington, the onetime swinging-London model who is now Vogue's creative director.

I'm sure this movie will appeal most strongly to fashion buffs (and Vogue's September issue usually sells about 13 million copies) but I found it completely addictive and haven't even glanced at a fashion mag in years. Whether or not you think what they do is meaningful, Cutler captures the intense passion Wintour and Coddington bring to their work. While some people in the magazine's orbit come off like total poltroons (photographer Marco Testoni) or comic figures ("editor at large" André Leon Talley), the central duo don't. Wintour is obviously an extremely intelligent and focused person, as well as exceptionally difficult to work for, but by the end of the film she's also become identifiably human. At one point she looks at a photo and murmurs affectlessly, "That's very pretty," and you want to gasp. What an amazing compliment!

"Thriller in Manila" This riveting documentary from Britain's Channel 4 is bound for HBO broadcast, and no boxing fan, sports fan or 1970s culture buff should miss it. In retelling the story of the legendary Muhammad Ali-Joe Frazier fight of 1975 from Frazier's point of view, director John Dower manages an almost Hegelian inversion of both sports history and African-American history, making me feel that almost everything I thought I knew about the so-called Thrilla in Manila (an event I can remember) was wrong.

An authentic representative of working-class black America who had grown up in dire rural poverty, Frazier was demonized by Ali as an ignorant, ugly Uncle Tom (and yes, Ali used all those words). Meanwhile the light-skinned, handsome Ali, who had been a relaively privileged star athlete since childhood, became an embodiment of black nationalism and self-empowerment. Of course that doesn't tell you the whole story: Ali was indeed a Black Muslim, while Frazier's boxing career was bankrolled by a group of white Philadelphia businessmen. Such was the bitter racial crucible in which the three history-making Ali-Frazier fights played out.

Dower gradually builds up to the fateful encounter in the Philippines, a fight of amazing brutality that left both men bloodied and battered. Although Ali won the fight he took an atrocious beating, one that Frazier (still harboring a substantial grudge) contributed to Ali's later neurological disease. Frazier, who lost the fight, remains reasonably lucid and mobile in his mid-60s. On the other hand, Ali is a multimillionaire, and his onetime nemesis lives in a one-bedroom apartment behind his boxing gym, underneath a Philadelphia railroad trestle.

Beyond The Multiplex Documentaries Fashion Movies The September Issue