Don't you want me, baby?

After Obama, it was back to the '80s at Sundance, from the hideous Bret Easton Ellis nightmare "The Informers" to Greg Mottola's delightful rom-com "Adventureland." 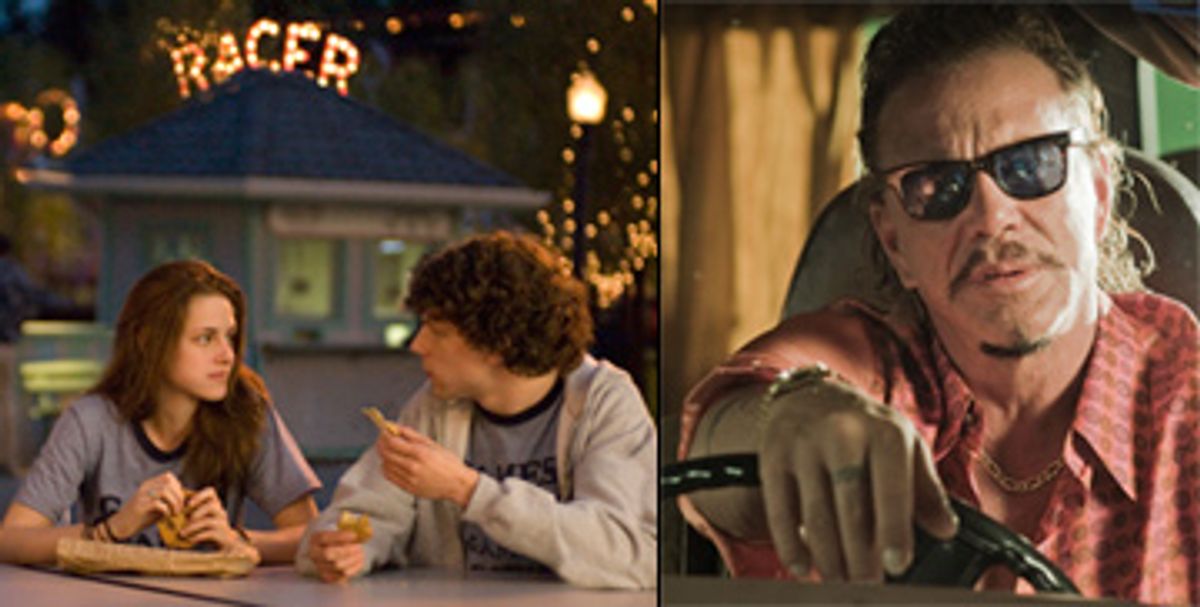 PARK CITY, Utah -- Work pretty much stopped at Sundance on Tuesday morning. Screenings were almost empty and 10 a.m. interview sessions were scrubbed. It was a glorious sunny day in the Wasatch Range, virtually T-shirt weather, and puffy-eyed Hollywood executives stood shoulder to shoulder with high-school girls and Argentinian tourists to watch our new president speak on the Jumbotron above Park City's historic Main Street. It was a reminder that most of us presumably got interested in movies in the first place for reasons that had nothing to do with financing or distribution deals or technique, but because they taught us things about the human race and the world we live in.

Then I put my Ray-Bans back on, went back inside, did a bunch of blow and had meaningless sex with a wide range of beautiful but despicable people. Or that's what it felt like anyway. I rushed straight from watching the inauguration to a screening of "The Informers," an architecturally impressive but thoroughly loathsome exercise in prepackaged 1980s nihilism, loosely adapted from Bret Easton Ellis' short-story collection of the same name. Some movies, as the saying goes, leave you feeling like you need to take a shower. This movie made me feel like I had just taken one. In prison. On my way to get the bad news at the STD clinic and attend my first 12-step meeting.

Every festival needs a designated disaster, a much-anticipated flick that fails on many levels at once, and "The Informers," which presents early AIDS-era Los Angeles as a featureless landscape of narcissism and debauchery, fills the bill for Sundance 2009. Even the things in "The Informers" that are in some sense well done, like the tormented, off-center supporting roles played by Kim Basinger (a pill-popping Hollywood wife) and Chris Isaak (an alcoholic Hollywood dad), are in the service of such profound emptiness that they too become horrible.

Ellis' stories were published in 1994 but set a decade earlier, so by the time we get to Gregor Jordan's film (co-written by Ellis and Nicholas Jarecki) we're looking at the '80s from two removes, as if preserved in amber as a museum of soulless depravity. For those of you too young to have adult memories of the decade in question, a few points: 1) People sometimes had ordinary, reasonably polite conversations, even in the '80s. Not absolutely all the talking was affectless mumbling, angry recriminations, drug deals or TV news about Ronald Reagan. 2) Sure, we did a lot of drugs and yes, the crime rate was higher. But a surprising number of people had to do stuff like work jobs, buy food at the grocery store and take care of their kids, however indifferently. 3) While evading the question of whether I ever had group sex in that decade, I will speak for other '80s survivors in testifying that it didn't happen every single day.

In his better prose, Ellis is able to enliven his vision of soulless yuppie America with a vein of dark allegorical humor and a surreal or grotesque joie de vivre. The stories of "The Informers," in fact, feature a vampire and/or cannibal subplot that's been ditched from the movie, leaving us with a murky and pretentious morass of pseudo-realistic, self-loathing characters who can only be distinguished from each other by their Billy Idol haircuts, or fake boobs, or lack thereof.

I could tell you that the characters range from Billy Bob Thornton as a studio big shot and Mel Raido as a fucked-up English rock star (conspicuously similar to Bryan Ferry) to the late Brad Renfro as a gawky aspiring-actor doorman and Mickey Rourke as the scary criminal uncle who screws up his life. Winona Ryder plays a neurotic TV newscaster (and Thornton's mistress) in an unfortunate role that looks as if most of it wound up on the cutting-room floor, and that raises all the wrong questions about Ryder's career. Jon Foster, Amber Heard and Austin Nichols play a beautiful threesome who are about to learn firsthand about that mysterious virus in the news, and Lou Taylor Pucci is their disgusted younger friend who's meant to seem morally redeemable or at least less corrupt.

But what's really amazing about "The Informers" is that this impressive ensemble is used to create a film of such bleakness and uniformity. It's a testament to the power of Jordan's direction, in perverse and ass-backward fashion, that none of those actors can rise above the brown, flat surface of this movie's moral and aesthetic swamp.

In contrast, the other major '80s film of this festival, Greg Mottola's amusement-park romantic comedy "Adventureland," is a total delight, with a winsome and terrifically textured cast who seem both like young-adult archetypes and recognizable human beings.

"Adventureland" will be released in theaters soon (by Miramax), so it isn't the moment for a full-length review. Let's just say that "Superbad" director Mottola captures the atmosphere of mid-'80s post-teenage boredom with wonderful charm and specificity. James (Jesse Eisenberg of "The Squid and the Whale") is still a virgin, but he's a bit more than your standard horny teen. In fact he's a Renaissance studies graduate planning to move to New York for grad school, until his parents' finances collapse and he's forced to stay at home in Pittsburgh. As he puts it, "Unless someone wants help restoring a fresco, I'm fucked."

So it is that James winds up at Adventureland, a mildly seedy theme park presided over by mustachioed Bobby (Bill Hader) and his dimwit wife, Paulette (Kirsten Wiig). James' co-workers include the pipe-smoking, Gogol-reading Joel (Martin Starr); local music legend Connell (Ryan Reynolds), a slightly older guy who allegedly once jammed with Lou Reed; the self-appointed hottest girl at the park, known only as Lisa P (Margarita Levieva); and of course the tomboyish, sharp-tongued Em (Kirsten Stewart), who makes James believe it might not be such a deadly summer after all.

Of course "Adventureland" will have to appeal to a broader audience than people who actually worked at dead-end service-sector jobs in the mid-'80s. It's much more intelligent, and vastly less insulting, than your average horny-kid comedy, and I think it will do just fine. But let's say this: If you were in fact there in that era, at Adventureland or someplace like it, then Mottola absolutely nails it. The hair, the clothes, the rides in old beaters fueled by bong hits and Replacements songs. The atmosphere of total ennui that in fact fostered the outburst of DIY creativity. The Foreigner cover bands and endless-loop radio play of "Borderline" and "Rock Me Amadeus." Part of me wanted to get off Mottola's time machine and work at the game arcade with James and Joel and Em for a few weeks. And then I thought about what that would actually be like, and I realized that visiting for 90 minutes is a whole lot better.