In his first day at his new job, Barack Obama puts his stamp on the presidency. 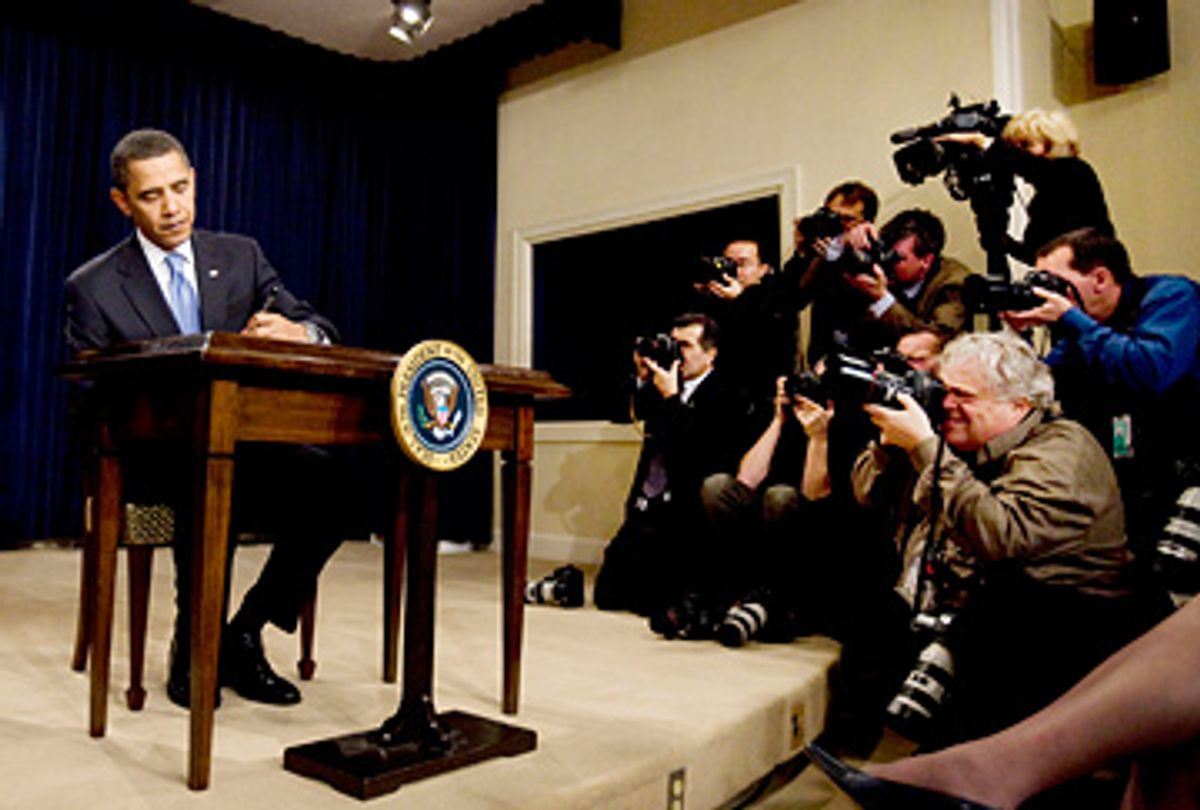 At least until the economy gets even worse, not many bosses could greet new employees on their first day with news of an immediate pay freeze and expect it to go over well. But apparently that's one of the perks of being president.

On a busy first full day at work, President Barack Obama issued a handful of official memos, executive orders and directives to the government making it quite clear that the Bush era is over and that he doesn't plan to waste much time starting his own. The memo for the salary freeze (which will apply to about 100 White House aides making more than $100,000 a year) said that in "a period of severe economic stress," the move is "a signal of our shared commitment to restoring the country's economic vitality." "Families are tightening their belts, and so should Washington," Obama said at a ceremony where he signed the orders and greeted the staff. (He thanked them for their "willingness to agree to it," though it seems unlikely that a staff meeting was held beforehand where they voted to go along with the deal.)

More meaningfully to everyone except those on the White House payroll, Obama also moved to open access to government records. The Bush administration found new ways to limit the public's ability to see what the government was up to almost every day; it was as if the administration was competing with itself for the most imaginative excuse to refuse to release information. (For instance, the Securities and Exchange Commission recently tried to charge $70 an hour to process Freedom of Information Act requests.) Obama instructed the government, instead, to err on the side of openness. "For a long time now, there's been too much secrecy in this city," he said. "The old rules said that if there was a defensible argument for not disclosing something to the American people, then it should not be disclosed. That era is now over." The attorney general and the White House counsel will have to review presidential declarations that material is off-limits to FOIA requests in the future. A working group will also convene, within 120 days, to come up with ways to make government even more transparent.

Even if the only thing Obama does is return government openness to where it was before George W. Bush (and Dick Cheney) got their hands on things, watchdogs say that's pretty good. "That is one of the things that is very attractive about secrecy — it gives you a lot of control," said Sean Moulton, director of federal information policy for OMB Watch, an open-government advocacy group in Washington. Even during the transition, he said, Obama's team "seemed to loosen up the reins a little bit and allow other people to get involved," by allowing comments on the Change.gov Web site and posting video clips of transition meetings. The video clips — which were edited and selected by Obama aides — may have been more about smart P.R. than about open government, but the impulse seems to be one that would have been utterly foreign just two days ago in the West Wing. Another Obama executive order barred White House staffers from lobbying their former colleagues and banned them from accepting gifts from lobbyists while they serve (though Republican National Committee aides pointed out that two people Obama has picked as deputy secretaries, William Lynn at the Pentagon and William Corr at Health and Human Services, worked as lobbyists until very recently).

Not everything was as smooth as the White House tried to make it seem. The press office appeared to be up and running, but one aide told Salon that some staff still lacked computers, phones, e-mail or Internet access, except via private addresses (reached by BlackBerry) that they had set up on Monday, just in case. Managing communications without having any way to communicate would be change we can believe in, but it would also be magic; presumably, that was just a first-day hitch. The promises of transparency were undercut, just a little, by the fact that the orders Obama had signed weren't posted on the White House Web site by the close of business Wednesday. In fact, the text of Tuesday's inaugural address didn't show up until sometime after lunch Wednesday.

But before the new president was even out of the morning's national prayer breakfast — the final inauguration-related event the capital will see until 2013 — the administration had moved to shut down trials of the detainees at Guantánamo Bay. After that, he called four Mideast leaders — Hosni Mubarak, Ehud Olmert, Mahmoud Abbas and King Abdullah of Jordan — to talk about the Israeli-Palestinian peace process. Later in the day, he got his secretary of state confirmed by the Senate — someone by the name of Hillary Clinton, whom you may have heard something about. Then he met with military commanders later in the day, when he was expected to order up plans for an orderly withdrawal from Iraq. All in all, not bad for a first day. Just imagine what the Obama administration can do when it gets the computers working.