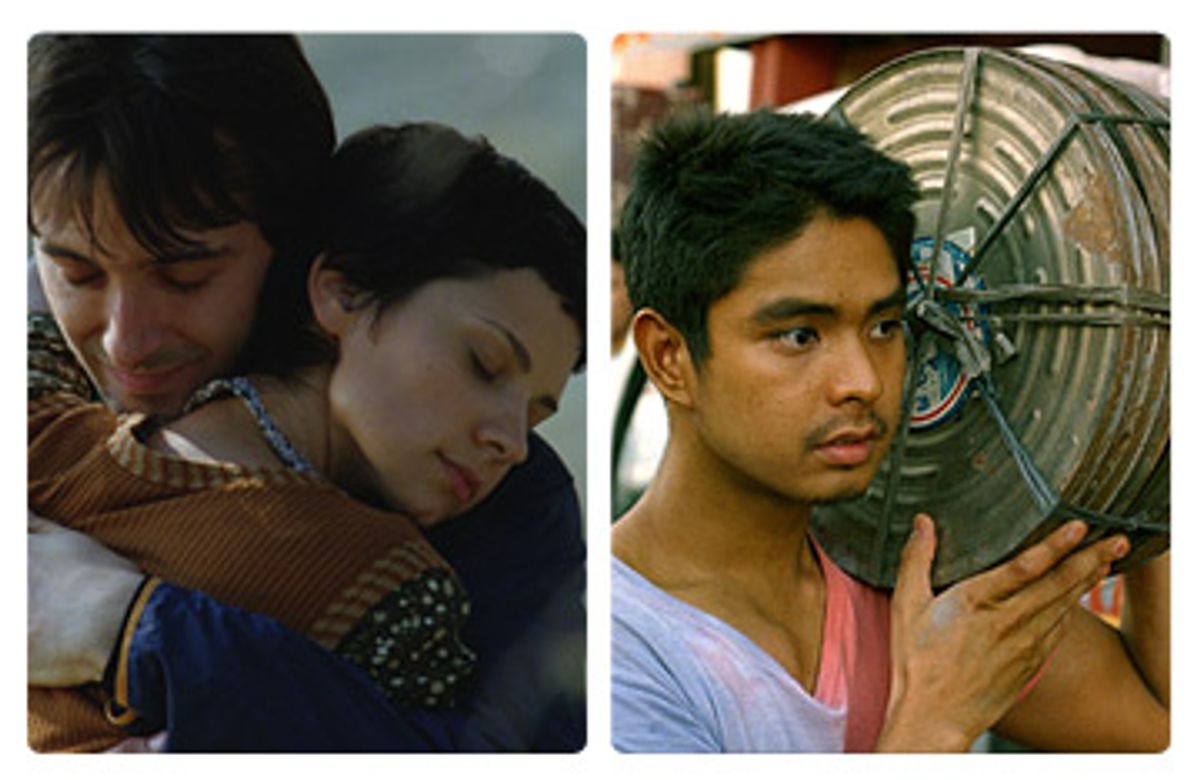 Images from "Shadows," left, and "Serbis."

This weekend we're launching a bite-size new feature here at Beyond the Multiplex world HQ, designed for maximum usefulness. See, there's a quandary here. As I keep opining in this space, with the wonder of someone rediscovering the wheel, theatrical release of smaller films isn't dead. If anything, the last year or so has seen a thriving, if tiny and viciously Darwinian, economy on the lowest fringes of the movie economy. But nobody has the time, or the undamaged attention span, to read full-length reviews of every small-release film. So every other Saturday I'll be here with a quick-hit roundup of the most interesting new movies or reissues trickling out in limited release.

It goes without saying that there's almost no audience for this kind of movie -- I could compare Mendoza to Fassbinder or to Taiwanese master Tsai Ming-liang, and I can feel the eyeballs drifting away as I write that -- but I don't want to leave you with the impression that "Serbis" is some kind of ultra-challenging, in-your-face filthfest. It has wonderful star performances from Filipina screen legend Gina Pareño and Jacklyn Jose as the matriarch and her adult daughter, respectively, who keep the Family theater (yes, I know, ha ha) afloat amid bigamy suits, teen pregnancies, men's-room flooding and general decrepitude.

Sure, the Family is sleazy. It's about the sleaziest place in the world, screening hetero porn but catering to a diverse population of rent boys, shemales, possibly biological-female hookers and their clientele. ("Serbis," or "service," is what you can receive from these various entrepreneurs.) But Mendoza and screenwriters Armando Lao and Boots Agbayani Pastor view the theater's denizens, whatever they have chosen or been forced to do in life, with tremendous compassion. The scene where the family's beloved 6-year-old rides his trike down the corridor through an assemblage of hookers, johns and assorted lowlifes has the breadth of vision of great lyric poetry. Something close to a gutter masterpiece. (Now playing at the Angelika Film Center in New York and the Laemmle Sunset 5 in Los Angeles. Opens Feb. 20 in San Francisco and Feb. 27 in Portland, Ore., with other cities to follow.)

"Shadows" A hallucinatory blend of Hollywood thriller, ghost story and Eastern European magic realism, "Shadows" announces the comeback of Milcho Manchevski, a filmmaker from the former Yugoslav republic of Macedonia who garnered international attention with his memorable 1994 debut, a Balkan-war drama called "Before the Rain." (It's now available on DVD from the Criterion Collection.) Since then Manchevski's been kicking around the globe, directing an "Arrested Development" video, an episode of "The Wire" and one peculiar and original feature ("Dust" in 2001) that almost nobody saw.

"Shadows" follows a handsome young doctor named Lazar (Borce Nacev) in the Macedonian capital of Skopje as his life comes unstuck a year after a near-fatal car accident. (Yeah, his name is a big-ass clue.) Lazar is haunted by wolves, muttering old crones and a series of hot bimbos in tight skirts, but most of all by a pixieish seductress (Vesna Stanojevska) who has her own reasons for prying Lazar away from his vacuous wife. If you're paying attention you'll grasp pretty early on that Lazar's fearsome mom (Sabina Ajrula-Tozija), an important scientist and government bigwig, has a lot to do with what's going on. "Shadows" is unabashedly trashy at times, but it has prodigious heart, and Manchevski captures the strangeness of contemporary Eastern Europe, where a sanitized, ultramodern surface can't quite conceal the ancient, muttering currents running beneath. (Now playing at Cinema Village in New York, with other cities to follow.)

"The Panic in Needle Park" A starmaking performance by Al Pacino as a junkie lowlife, a screenplay by Joan Didion and husband John Gregory Dunne, and director Jerry Schatzberg's grimy, sweaty portrait of downscale Manhattan, circa 1971. Why the hell isn't "The Panic in Needle Park" seen as a period classic, the way "Taxi Driver" is? OK, Schatzberg didn't go on to have Martin Scorsese's career (although "Scarecrow" and "The Seduction of Joe Tynan" are pretty good movies) but nobody else did either. This is genre-defining American dirtbag cinema, and you shouldn't miss it.

Pacino has deadly charisma -- pretty much literally -- as Bobby, a sweet-tempered but utterly immoral hoodlum, and he's well matched with relative unknown Kitty Winn, who gives a performance of tremendous vulnerability and depth as his semi-innocent girlfriend from Indiana. With its up-close-and-personal images of addicts shooting up, "Panic" cemented 1970s public opinion of junkies, and also the impression that New York was an ungovernable, crime-ridden and garbage-strewn cesspool. Schatzberg shot in real Manhattan locations, and amazing as this may seem to current Gothamites or recent tourists, "Needle Park" was the area around Broadway and 72nd Street, which was perceived as divey and dangerous in that pre-pre-Giuliani era. (Now playing at Film Forum in New York. Other cities and DVD release will follow.)

"Blessed Is the Match: The Life and Death of Hannah Senesh" This is a pretty conventional History Channel-type documentary assemblage of witnesses, experts and file footage -- but what a story they tell! A Zionist poet who was born in Hungary and had emigrated to Palestine as a teenager, just before the Holocaust, Hannah Senesh, or Szenes, was among a small group of Jewish commandos who parachuted into Nazi-occupied Eastern Europe in 1944 in an effort to save Jews and spark anti-German uprisings. As director Roberta Grossman is aware, not every possible viewer will sympathize with the film's glowing portrait of the Zionist-Israeli project, but the immense courage and almost spiritual nobility displayed by this young woman, an unworldly 23-year-old at the time of her suicide mission, are breathtaking. Understandably, Senesh is now viewed as an Israeli national hero, and Grossman's film -- which was short-listed but not nominated for the documentary Oscar -- aims to spread her fame to other nations. It worked for me. (Now playing at the Sunshine Cinema in New York. Opens Feb. 6 in Los Angeles, March 20 in Washington and March 27 in Boston. Check Web site for other screenings; DVD release will follow.)