The party of prima donnas

Obama is trying to build a country that works together like a great football team. The Republicans want to take their ball and go home. 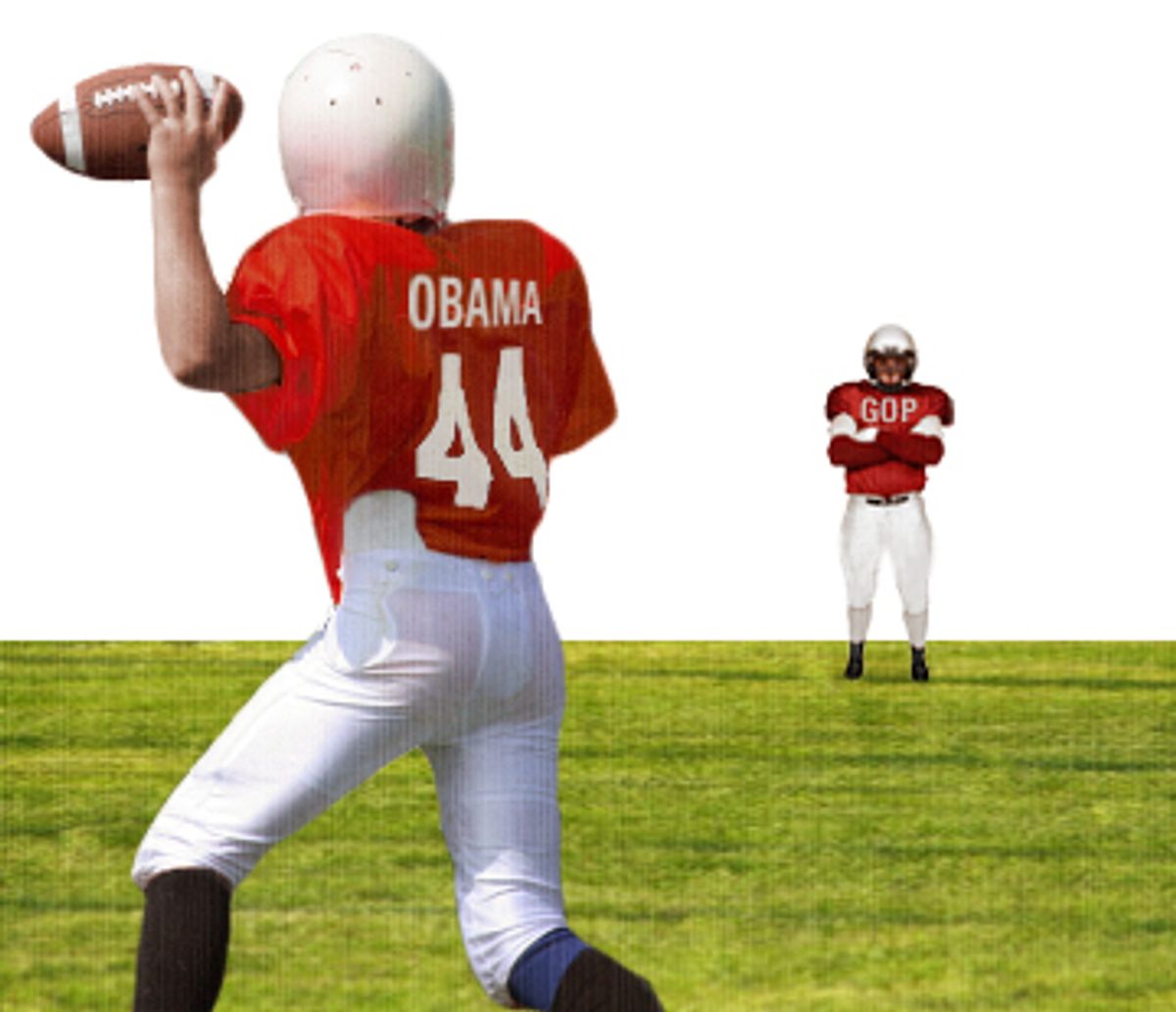 Sunday's Super Bowl between the Arizona Cardinals and the Pittsburgh Steelers, watched by 100 million Amerians, was one of the best ever played. The taut, suspenseful game was not decided until the final 35 seconds, when Pittsburgh's Santonio Holmes made a catch for the ages in the end zone to give his team a thrilling comeback victory.

To watch that winning play, and the two had-to-score Arizona drives before it, was to see teamwork in magnificent action: Eleven athletes working together like parts of an intricate clock, each player's success dependent on his teammates', all joined together by a bond forged in the brutal two-a-day workouts in the dog days of August and over the course of the long, grinding season, all aiming at the same goal.

All non-individual sports require teamwork. But football presents that selfless ethos in its most dramatic form. It is a symphony of controlled chaos in which every player must play his part perfectly. The ferocious explosion at the line of scrimmage as the huge linemen collide, the peripheral blur of angular motion as the receivers race downfield and the cornerbacks lock onto them, and at the center of the storm the quarterback, scanning the field, needing his big guys up front to keep those inhumanly fast and strong defensive linemen off him for just half a second more, until his receiver comes free, and he hurls a tight spiral 100 feet downfield into a target the size of an LP and the receiver leaps, makes everything else in the world stop, sees the rotation of the football in slow motion, catches it and holds on as a safety whose body is made out of ironwood and has no conscience smashes into him like a baseball bat.

After he made the catch, Holmes hugged the ball with both arms, first on his knees, then lying flat on his back, almost in disbelief. And as he embraced quarterback Ben Roethlisberger, the two men beaming at each other like little boys who had just started an eternal summer vacation, it wasn't just those two players who owned the moment. Everyone wearing a Pittsburgh uniform owned a piece of it, and they will own it forever. Because they're teammates.

One of the reasons that we are drawn to sports is because they let us experience this feeling. The emotion we feel celebrating a team victory, or watching teammates celebrate, or, for that matter, watching a losing coach pay tribute to his players, as Arizona's Ken Whisenhunt movingly did, is powerful confirmation of just how deeply seated a human instinct this is. Teamwork is literally inscribed in our genes. We are social animals. If cut off from other humans, we become warped and stunted. And part of our long evolution as human beings is the movement toward expanding the circle of those who count as part of our team, from our family to our tribe to our nation to all of our fellow humans.

Sports offers a miniaturized, idealized vision of teamwork. In the real world, of course -- and even in the world of sports -- things are not as simple. Co-workers stab each other in the back. Family members detest each other. Teammates don't get along. Blue staters are suspicious of red staters. Republicans and Democrats don't see eye to eye. We are social animals, but we are also profoundly individualistic, and the two impulses are often at war with each other. But the human instinct to cooperate, to work together, is real and powerful, and it is an ideal we all embrace. Without it, there would be no civilization.

Which brings us to our current moment. We are in a dreadful economic crisis, the worst in the lifetime of anyone who is under 70 years old. Forget the abstract statistic that millions of people are out of work and try to grasp this staggering reality: Twenty thousand jobs a day are being lost. Millions of people have lost their homes and their life savings. Countless millions have no health insurance. Businesses are failing at a staggering rate. Desperate states are shutting down services.

This is not a drill. These are real things that are happening to real people, people we all know. Everyone, whether they're poor, working-class or middle-class, has either suffered themselves from the economic collapse or knows someone who has.

President Obama has responded to this emergency with a stimulus package that attempts to achieve two goals -- one immediate and temporary, and one long-term and structural. The package is intended to spur immediate growth in the economy by infusing cash into the system's frozen gears. But it is also intended to begin the far more profound process of transforming America. His plan provides big federal money to repair America's schools and roads, lower healthcare costs, and make our energy policy sustainable. By giving Washington a much larger role in addressing our problems, Obama is implicitly making the point that government is not the enemy of individual freedom, but rather the embodiment of our shared interests -- that it is not "it" but "us." He is trying to turn America from a nation of isolated individualists into one that works together like a team.

Obama's stimulus plan is no call for socialism. It is a far from radical hodgepodge, and there is much to criticize about it, whether you are a liberal or a conservative. No one expects every congressional Republican to sign off on it, or any of them to agree with all of it. But in this moment of crisis, it is reasonable to expect the opposition party to seriously engage with it, be willing to compromise, and where they disagree, come up with a coherent alternative plan. It is reasonable to expect them to work in good faith with the administration to help heal their badly wounded nation. It is reasonable to expect them to recognize that we are all in this mess together, and we must all work together to get out of it.

But instead, Republicans have taken their ball and gone home. Not a single House Republican voted for the stimulus package. Nor did they come up with an alternative plan. Their only prescription is more of the same poisonous medicine they have prescribed for decades: tax cuts for the rich, tax cuts for the rich and more tax cuts for the rich. In response to Obama's call for teamwork, the GOP threw an infantile temper tantrum and walked off the field.

The GOP's shamelessness, hypocrisy and civic irresponsibility is staggering. It would be one thing if they had never had a chance to implement their ideas. But the country has tried it their way, and it didn't work. For decades, Republicans have pursued their philosophy of tax cuts, complete deregulation and blind faith in the wisdom of the market -- and the results are to be seen all around us. Nor can they even claim consistency. During the Bush years, Republicans had no problem in voting for his huge government spending programs and swallowing the record deficits he ran up. But now that a Democratic president is proposing deficit spending, they have suddenly become doctrinaire anti-Keynesians.

In a healthy body politic, a national disaster inspires unity. When 9/11 happened, all of America pulled together -- until George W. Bush's rash policies ripped the country apart. The only silver lining of a crisis is that it calls up a sense of fellowship, of national neighborliness -- of teamwork. We may be in a dreadful spot, but at least we're all in it together.

Just as the Buddha only began his quest for enlightenment when he saw a sick man, an old man and a dead man, so often it is only suffering or danger that awakens our sense of fellowship with others. Perhaps it is just an atavistic instinct to survive, but when you're hurt, you become more compassionate. All too often, prosperity and contentment anesthetize and atomize us. There is a reason why Jesus said, "It is easier for a camel to go through the eye of a needle than for a rich man to enter the kingdom of heaven."

Facing a crisis far graver than this one, one of our greatest leaders called upon Americans to put aside selfishness and embrace a larger, more generous civic vision. In his first inaugural address, delivered in 1933 in the depths of the Great Depression, Franklin Delano Roosevelt said, "The measure of the restoration lies in the extent to which we apply social values more noble than mere monetary profit ... These dark days will be worth all they cost us if they teach us that our true destiny is not to be ministered unto but to minister to ourselves and to our fellow-men."

And FDR called not just for new values, but for national sacrifice -- for national teamwork. "If I read the temper of our people correctly, we now realize, as we have never realized before, our interdependence on each other," he went on. "That we cannot merely take, but we must give as well, that if we are to go forward we must move as a trained and loyal army willing to sacrifice for the good of a common discipline. Because without such discipline, no progress is made, no leadership becomes effective."

The late Hall of Fame football coach Vince Lombardi couldn't have put it better himself.

Americans responded to FDR's appeal, and the economy responded to his New Deal. America pulled itself out of the Depression. And the great safety net of Social Security, one of our nation's greatest achievements, was created.

In similar fashion, Obama is calling for an end to the institutionalized selfishness that reached its destructive height in the miserable presidency we have just witnessed. He is calling on us all to realize that not only is it morally right to care about our neighbors, it's the best way to win. Just as a good football coach knows that his top priority is to get his team to play as one, rehabilitating the concept of "us" is at the heart of everything Obama is trying to achieve.

But today's Republicans cannot understand the concept of "us." Like their mean-spirited idol Rush Limbaugh, they would rather stand aside and watch America go down than abandon their rigid ideology. Convinced that all restrictions on "freedom" are dictatorial and pave the way to the "nanny state," a bureaucratic Big Nurse in Washington determined to kill Americans' independent spirit, they have become incapable of grasping that national unity can mean anything other than supporting the military and saluting the flag. For them, fellow feeling is to be manifested in charity only. Social justice is for bleeding hearts. Teamwork is communism.

Their position is painfully familiar. But at a time when Americans' deepest instincts call out for cooperation, the Republicans have shown their true colors. They're not flinty individualists, they're prima donnas and head cases.

It may be beginning to dawn on most Americans that not just government, but teamwork itself, is an alien concept for the pinched, extreme ideologues who have taken over the Republican Party. That they hate the idea of government because it requires sacrifice and discipline, because it is about something larger than oneself, because it impinges on their infantile dream of total self-indulgence.

More tax cuts! You disrespected me! Government is evil! I'm holding out for more money! Democrats are bribing poor people to vote for them! Just throw me the damn ball!

It's the fourth quarter and time is running out. And while the country rallies behind its quarterback, the GOP has become a party of Terrell Owenses, sulking, malingering and screaming at the coach. They're a clubhouse cancer, and it's long past time to cut them from the team.