In the final article in Salon\'s series, we ask what President Obama will do about the rise of suicide and murder among U.S. soldiers returning from combat. 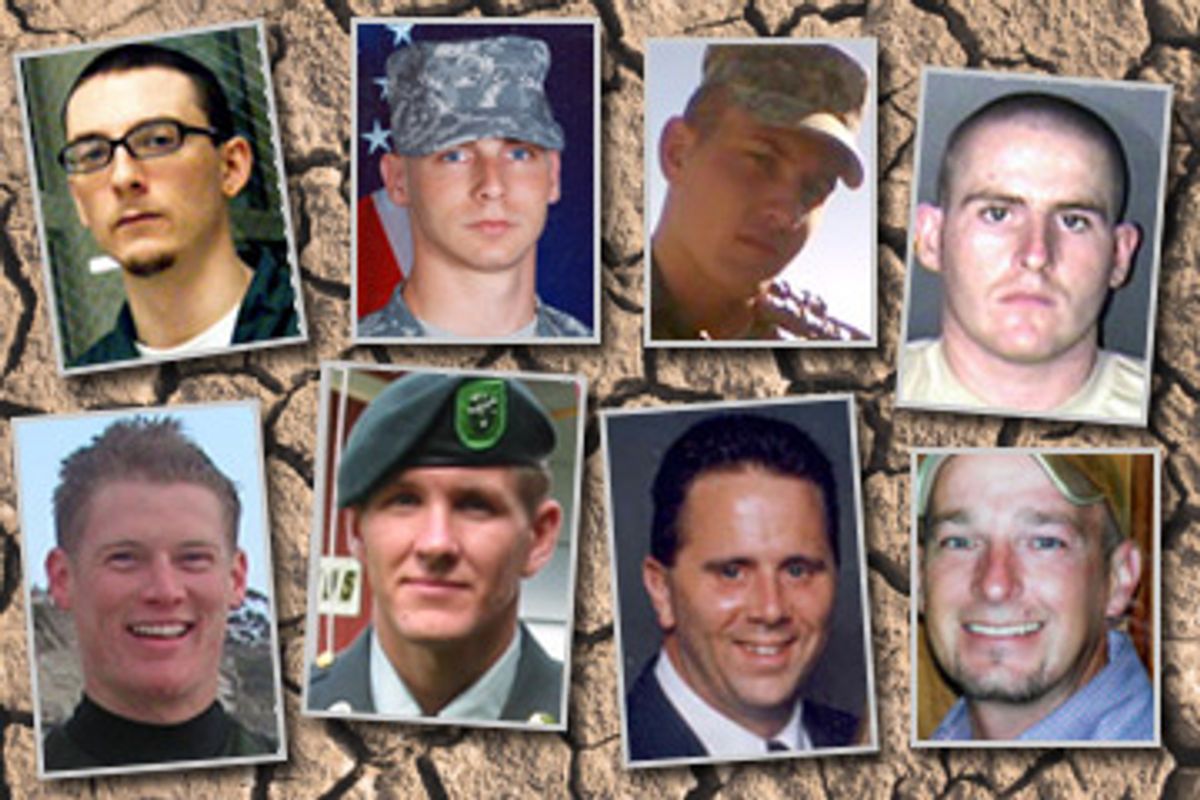 Two days after the election, the investigative arm of Congress, the Government Accountability Office, released a list of the 13 issues requiring "urgent attention and continuing oversight" from the new administration and Congress. Listen to any politician. Surf the Web. Open a newspaper. You can probably draw up a list yourself pretty quickly, given the recession, two wars and killer peanut butter.

After scanning the headlines, you probably would not jot down the first agenda item on the GAO list of issues "needing the attention of President-elect Obama and the 111th Congress." The first issue on their list: "Caring for Service Members."

Four years ago, Salon exposed inadequate mental healthcare at Walter Reed Army Medical Center, unraveling the first threads in what eventually became part of a national scandal. Today, the grind of multiple deployments in Iraq and Afghanistan translates into scores of damaged soldiers coming home. The trend far outstrips the raft of good-sounding military programs -- seemingly invisible at some Army posts -- the Pentagon set up to help these desperate troops. Forget about moldy barracks or mouse droppings in the hallways. People are dying unnecessarily.

Over the past week, Salon has published a dozen stories and sidebars about the healthcare problems at just one Army post among the many Army installations worldwide, Fort Carson, Colo. Salon dug up 25 cases of suicide, prescription drug overdoses or murder involving Fort Carson-based soldiers since 2004. In-depth study of 10 of those cases exposed a string of preventable deaths. In most cases, deaths seemed avoidable if the Army better identified and then appropriately treated soldiers' combat stress or brain injuries from explosions. In others, the Army, under pressure to deploy more troops in Iraq, brought into the ranks mentally damaged soldiers and then sent them to war. After combat had exacerbated their preexisting problems, the Army set them loose on the streets with deadly consequences.

Untreated, combat stress can cause bad behavior -- insubordination, substance abuse, violent outbursts. The Army was quick to crack down on soldiers for misbehavior but showed little interest in figuring out the underlying cause. Our reporting suggests that saying there is a "stigma" in the Army associated with seeking mental healthcare is an understatement. Harassment or punishment of those soldiers who show signs of mental strain or "weakness" seems like a more accurate description. One mock official Army document at Fort Carson asked soldiers seeking mental health help to pick one of the following explanations for their "Hurt Feelings": "I am a pussy," "I am a queer," "I want my mommy." In that environment, some troops opted to self-medicate with alcohol or drugs, making their problems worse.

We chose, whenever possible, to have our stories focus on the lives of individual soldiers, to illustrate the real-world, flesh-and-blood impact of inadequate care. Some examples: After the Army failed to diagnose or treat his post-traumatic stress disorder for two years after his return from Iraq, Pvt. Adam Lieberman swallowed an overdose of prescription drugs last October. He lived to tell about it -- though his mother had to clean up the suicide note he'd painted across his barracks wall so the Army wouldn't charge him with defacing public property. Pfc. Ryan Alderman suffered symptoms nearly identical to Lieberman's, but floundered in a similar predicament at Fort Carson for a year. He was found dead in the barracks of an overdose around the same time Lieberman made his suicide attempt. The Army allowed Staff Sgt. Chad Barrett to go back to Iraq on Christmas day in 2007, despite his PTSD and a previous suicide attempt. Barrett killed himself by downing some of his eight prescription drugs five weeks after arriving in Iraq.

Blond California surfer John Needham seemed mentally fit when he went to Iraq in late 2006. A year later he held a gun to his head as his PTSD took over. (A buddy grabbed the gun. The bullet hit a wall.) He and his family fought the Army for healthcare through the summer of 2008, when the Army broke its own rules and put him out without required benefits. A few weeks after his discharge, he allegedly beat to death his girlfriend, 19-year-old aspiring model Jacqwelyn Villagomez. The Army brought into the ranks two mentally damaged soldiers, Kenneth Eastridge and Robert Marko. Though the Army knew of their problems, both went to Iraq anyway, further damaging their minds or fulfilling their violent delusions. Eastridge was later an accessory to murder. Marko faces murder charges.

Since the Army surgeon general runs medical care at all Army posts, it is likely that the care at Fort Carson is representative of the care experienced by Army personnel everywhere. So are the problems. Nearly 300,000, or 20 percent, of military service members who returned from Iraq or Afghanistan report symptoms of PTSD, major depression or possible traumatic brain injury, according to a RAND Corp. study last year.

Throughout all of our reporting, we are unaware of any instance of the Army holding anyone accountable in any way -- from a soldier's first sergeant up to the Army surgeon general -- for any of the missteps documented in our articles.

Former Health and Human Services Secretary Donna Shalala served on a presidential commission, along with former Republican Sen. Bob Dole of Kansas, to formulate solutions to the problems made famous at Walter Reed. Their July 2007 report heavily emphasized better diagnosis and treatment of invisible wounds like PTSD and brain injuries.

Dole and Shalala can correctly identify the problems, but a commission can't make the Army do much. "If one person is dying from something that is preventable, then we haven't gotten it right," Shalala told Salon in a telephone interview.

When asked what she would tell President Obama if given the chance, she responded, "I'd tell him to get ready. We've got a nightmarish situation."

"The problem with the pullout [of troops from Iraq] is not what it will do to Iraq, but what it will do to the United States of America if we are not ready with teams to absorb not simply these young men and women into our society and into our economy, but absorb them into our healthcare system with appropriate and sensitive treatment," she said. "One of the things we had better think about is if we are going to bring a bunch of troops back pretty quickly, we had better be ready for it." She also heavily emphasized preventing troubled soldiers from going to war in the first place.

The Army suffers no shortage of initiatives that, at least on paper, have improved care for soldiers suffering combat stress. "We've really tried to enhance our access to care," Col. Elspeth Ritchie, the Army's lead psychiatrist, said in a telephone interview.

The Pentagon set up a 24-7 hot line for struggling soldiers to arrange counseling and established a new program, called RESPECT-Mil, to better incorporate mental health treatment into primary care. Since the spring of 2007, Ritchie says, the Army has hired 250 new mental health providers through civilian contracts and more than 40 marriage and family therapists. Another new policy, started in the spring of 2008, means mental health counseling is no longer supposed to muss up a soldier's security clearance. Two memos from the Army surgeon general in 2007 and 2008 also aim to encourage more accurate post-traumatic stress disorder diagnoses.

Certainly the programs saved somebody. We've met soldiers who called that 24-hour hotline and received vital help. Army officials, however, struggle to explain the obvious gap between the well-meaning new programs and the pattern of soldiers at Fort Carson battling for medical treatment and suffering something akin to harassment from some superiors for seeking help in the first place.

Army officials complained they can't discuss individual cases without running afoul of privacy rules. In our search for answers, we were often left with platitudes. "We continue to reach out, to search for methods, practices and procedures to help our soldiers," the commander of the Army hospital at Fort Carson, Col. Kelly Wolgast, said in an interview at her office. "Clearly we are not there yet with making it perfect because we've had some losses and we've had some soldiers who have done some behaviors that are not accepted in our society."

Top Army officials are in lockstep in saying that they are largely vexed about why things keep getting worse. Late last month the Army unveiled the most frightening Army suicide statistics in three decades. The Army says 128 soldiers committed suicide in 2008 with another 15 still under investigation. "Why do the numbers keep going up?" Army Secretary Pete Geren asked at a Jan. 29 Pentagon press conference. "We can't tell you." The Army said a new $50 million study might crack the mystery.

Ritchie, the top Army psychiatrist, suggested factors other than undiagnosed, untreated combat stress lurked behind the new numbers, though her statistics could arguably show exactly the opposite -- undiagnosed soldiers wreaking havoc. "When you look at the 2008 cases, only about 9 percent have a diagnosis of PTSD," she said. "About 70 percent of our completed suicides, there are failed relationships, either intimate relationships or with family."

Ritchie has worked in the top echelons of Army medicine for years. When asked if she has ever had the opportunity to query enlisted soldiers, personally, in an off-the-record environment by strolling the barracks or hanging out in a hospital smoking area, she said no. "I don't, per se, do that in an informal way," she admitted. "But the Army has a number of mechanisms to gather information from all levels, through anonymous surveys, through focus groups."

Inside the Pentagon, at least, the rising trend of apparently preventable suicides, murders and other avoidable deaths remains a complicated mystery. Soldiers and their families, meanwhile, are attending too many funerals.