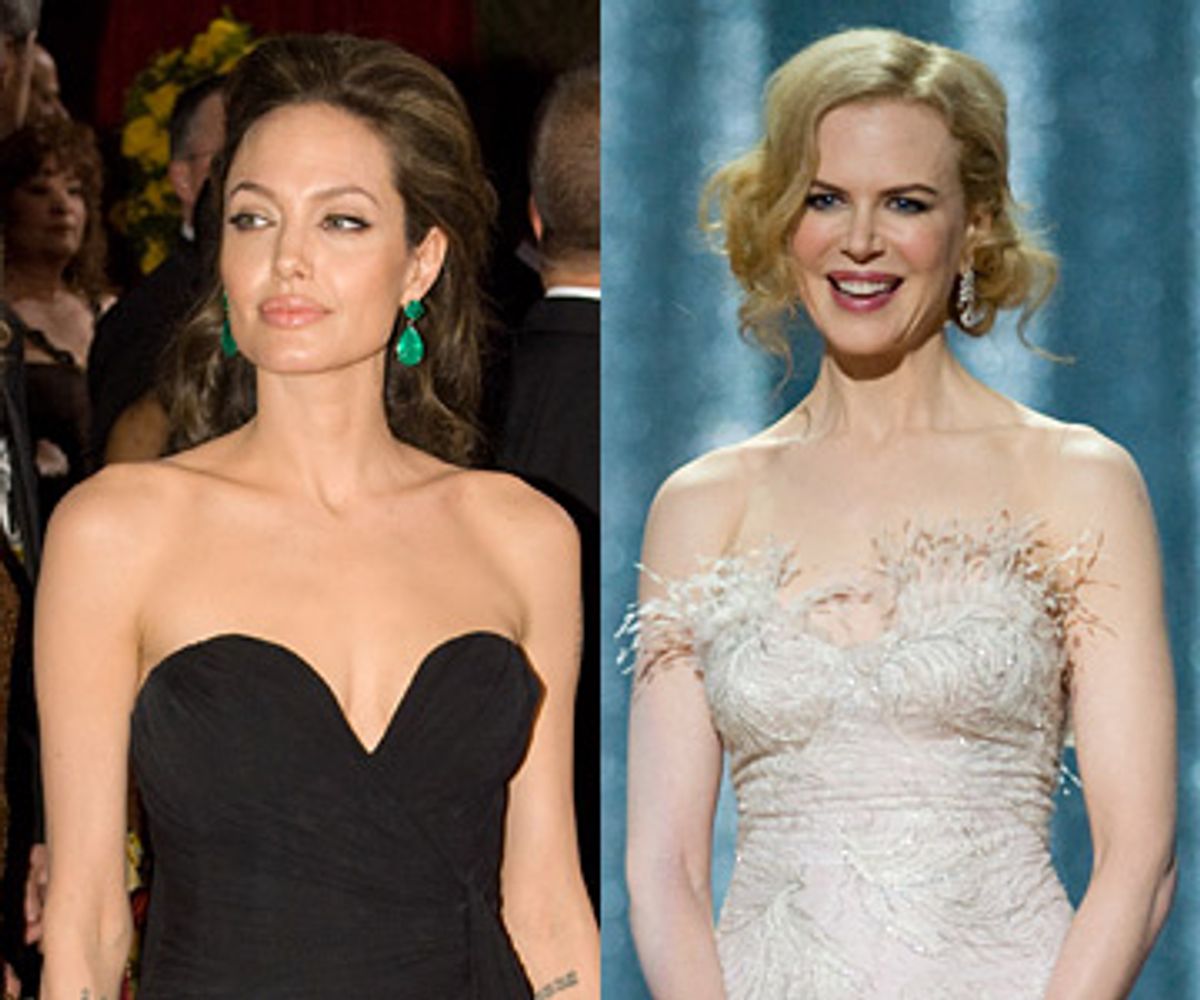 Last night's Academy Award telecast reminded me a little of that old brain-teaser: Whatever you do, don't think about an elephant! Mind you, I found the attempt to reglamorize the Oscars by juicing up the broadcast with star power and reminding us of the awards' semi-glorious history reasonably successful. As a song-and-dance man, Hugh Jackman is completely charming, and by the end of the night even the fact that he can't deliver a joke to save his life had become more endearing than baffling. The rotating roster of TV comedians needling the crowd had become a tired, diseased shtick, and it was past time to retire it.

Anybody with even the slightest affection for film history had to be blown away by the lineup of five previous winners in every acting category, hauled out to anoint a new champion. For my money, Shirley MacLaine -- who seems to have embraced her life role as batty old lady with gusto, and suddenly bears a startling resemblance to Pauline Kael -- talking so earnestly and directly to a weeping Anne Hathaway, just as if a significant percentage of the globe's population were not listening in, was the performance of the evening.

And then there was the mee-rowr moment of the evening, when Nicole Kidman delivered her decidedly frosty so-called tribute to Angelina Jolie. I mean, I know Kidman is never going to win a World's Warmest Person award (except on the Ice Planet of K'Znorg), and I know that Jolie has displaced her in terms of Overall Hollywood Va-Va-Voom. But seriously, did she have to close her speech this way? "In 'Changeling,' your search for justice and for the truth, led with heartbreaking anguish and steadfast determination, reminded us all of the enduring powers of a mother's love. As one who would not let her son be forgotten, Angelina Jolie, you were unforgettable. Bitch."

I kid. But it's because I care. Seriously, the meant-to-be-good moments worked pretty well, like Bobby De Niro's moment of homo-friendly joshin' with Sean Penn, and the beyond-awkward-into-bizarre moments were fascinating. As in, Ben Kingsley talking to Mickey Rourke, two guys who pretty much epitomize the outermost extremes of British and American acting styles. Not only have I never seen their names in the same sentence before, but it never occurred to me that Sir Ben and Mickey existed at the same point on the space-time continuum. Did they go out and do shots off the curvature of Marisa Tomei's spine after the show? Maybe they talked about doing a sequel to "The Wrestler," in which Kingsley plays a Lebanese-American accountant from Altoona, Pa., who becomes an al-Qaida "heel" in the squared circle, under the tutelage of semi-retired Randy the Ram. (As you can tell, boys, I'm available for the screenplay.)

Totally enjoyable. And lest I forget, my Berkeley High School classmate, special-effects maven Craig Barron (one-time entertainment editor of our school paper, when I could track him down), was up there on the podium with a statuette, in the group of guys who won the visual-effects award for "The Curious Case of Benjamin Button." Way to keep it real for the Jacket, Craig. I'll take credit for your entire career, based on that time we cut class to go see "Alien" the day it opened.

But then there was the elephant. You see, all that star power was meant to distract us from an increasingly troublesome fact: The Oscars are greatly diminished, and Hollywood is feelin' kinda itchy in its own skin. This isn't quite a news flash, I know, but the Academy Awards don't reflect the taste of the mass public and also don't reflect some highbrow (or middle-highbrow) critical consensus. Oscar has always symbolized the film industry's self-congratulation, and as such stood for the tastes and opinions of a highly insulated group of people who live and work in the western half of Los Angeles County. At one time those people's opinions seemed to matter a lot more than they do now.

There are a lot of boring reasons for that which I won't rehearse -- the changing nature of entertainment and the fluidity of information in the electronic age, blah blah -- but one thing that's become clear is that the film industry feels no confidence about the cultural significance of its own products. Hollywood's self-appointed division of self-importance, the Academy of Motion Picture Arts and Sciences, passed up the chance to honor one of the most ambitious and successful films the American movie factories have ever made in order to hand out hardware to a mid-budget, semi-independent production made in India without movie stars.

I'm talking about "The Dark Knight" and "Slumdog Millionaire," but I'm not trying to argue the subjective and nearly meaningless question of whether one is better than the other. Look, if it were up to me, we'd be handing out hardware to "A Christmas Tale" and "The Flight of the Red Balloon." I'm pretty well outraged that "Waltz With Bashir" was nominated in only one category and director Ari Folman is heading back to Israel today with bupkis. (In fairness, I haven't seen "Departures," the Japanese film that copped the foreign-language prize.) So I hope the film industry is appropriately grateful that my taste is not decisive.

In fact, despite the vastly different economies of scale in "Slumdog" and "Dark Knight," I see them as fundamentally similar: Both are bravura technical exercises, but severely limited in terms of characterization and storytelling. I didn't especially like "Dark Knight," but there's no disputing its mighty heft and enormity of effort, nor the tremendous enthusiasm and vast global payday it engendered. After the fact, with Oscar season about to recede into our forgettery, I find the fact that it wasn't nominated in any major category even more astonishing.

Time was, a movie that combined that degree of artistic ambition and popular success, from "Lawrence of Arabia" to "Titanic" to the "Lord of the Rings" trilogy, would have been a shoo-in for a best-picture nomination. But in recent years the Academy's own membership -- an electorate of fewer than 6,000 people, all of whom have or have had careers in the American film industry -- have begun to view commercially successful films with suspicion, or perhaps with guilt. It's as if the latter half of the Bush administration provoked a collective crisis of conscience among the overpaid liberal-arts set: Do we really want to export this crap to all corners of the globe? And why didn't I accept that grad-school slot at Georgetown, like my dad wanted, instead of taking a job reading scripts (and spritzing seltzer) for Al Ruddy?

Oscar's angst and confusion produced a much more enjoyable telecast this year, and God knows we all needed that. But it also raises certain questions that do not point toward edifying answers. Are they going to stick with this five-previous-winners model for a while? So next year we get, say, Charlize Theron and Kathy Bates and Jane Fonda and Cher up there alongside Kate Winslet? Or, I don't know, Timothy Hutton and Joe Pesci and Jim Broadbent and George Clooney along with a Heath Ledger hologram? That could get very, very weird in a short number of years. Like two.

Then there's the question of just how long Oscar's current mode of anguished middle-ground compromise will be culturally viable. Can you continue to build an evening of candyfloss entertainment and Hugh Jackman goodfooting, year after year, out of the spectacle of the mainstream film industry writhing in Hamlet-like uncertainty on the spit of its own despair?

Last year, still running on the gasoline vapors of a boom economy, Oscar settled on a couple of archetypal Indiewood films, "No Country for Old Men" and "There Will Be Blood," as the objects of its affection. Both were serious, showy and entertaining in varying degrees; they came with Hollywood heavy hitters attached and they attracted at least a modest audience. Furthermore, the mainstream industry hadn't produced anything remotely competitive, as those of us who write about this stuff year after year duly noted. It was hard to say whether the Oscars were ignoring big-money Hollywood or the other way around.

This year, it's all become clearer. ABC and the Academy leadership may have labored mightily to produce a telecast pleasing to a wide viewership, but the Academy membership evidently wishes to purge itself of grosser impulses and downsize into a leaner, cleaner and purer institution, something like Benedict XVI's Catholic Church.

If you take the long view, maybe this change is normal and cyclical and in no way new. This tension between arty and commercial cinema, and this tendency to revert away from either extreme toward a mean of mediocrity, has been present in the Academy all along. In 1931, the fourth year Oscars were handed out, best picture went to the western "Cimarron," while neither "City Lights" nor "Frankenstein" was nominated. Consider this list of non-nominated pictures from 1955 and 1956 alone: "The Night of the Hunter," "Rebel Without a Cause," "The Searchers," "The Seven Samurai," "Bus Stop," "Oklahoma!," "The Man Who Knew Too Much," "Written on the Wind." (Winners: "Marty" in '55, "Around the World in 80 Days" in '56.) One could go on; look up 1973 if this sort of thing engages you.

Fairly or not, "The Dark Knight" now belongs on that list, while "Slumdog Millionaire," a nifty little film without much steak beneath its sizzle, is now inscribed on the tablet of what-the-hell-were-they-thinking Oscar champions, alongside "The Life of Emile Zola" and "The Greatest Show on Earth." And "Dances With Wolves" and "Shakespeare in Love" and "Crash" -- and most likely whatever wins a year from now. Still, I can't wait for the tender, tearful exchange between Judi Dench and Miley Cyrus.