Obama to GOP governors: May I have this dance?

The White House throws a dinner for governors -- even the Republicans who still say they don't want Obama's stimulus money. 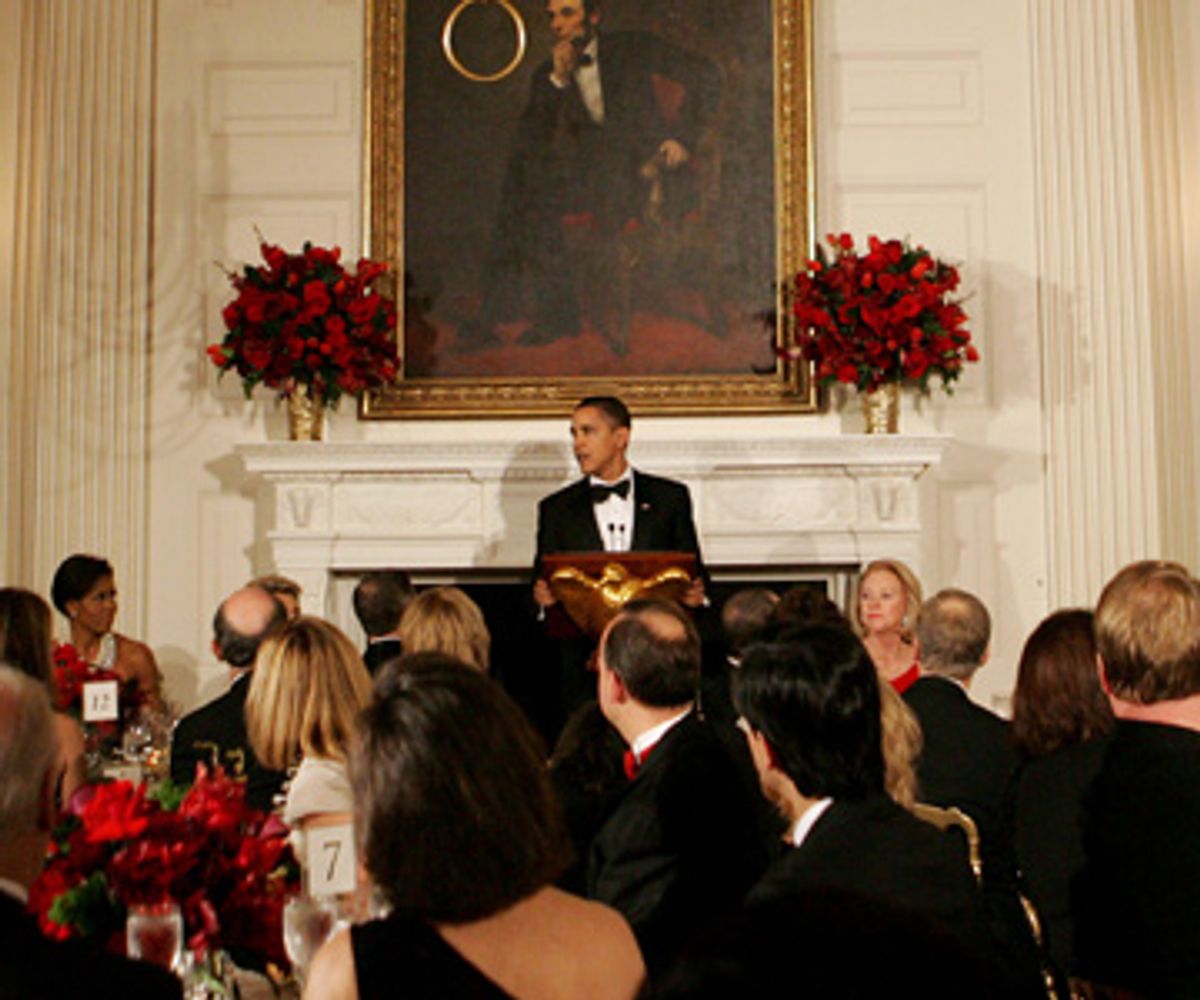 The secret to lasting political harmony and goodwill has apparently been sitting, unnoticed, in dusty vinyl collections, oldies radio playlists and wedding band repertoires for decades. To get even the fiercest of partisan enemies to drop the hard feelings, it seems, all you really need is "Boogie Wonderland."

Or at least that was the impression given by the first formal dinner of the barely month-old Obama administration Sunday night. As Earth, Wind & Fire rocked the White House, President Obama feted the nation's governors -- even the small bunch of Republican holdouts who stirred up trouble last week by claiming, loudly and probably entirely falsely, that they don't want the billions of dollars in federal aid the administration's stimulus bill will direct to their states. Some of Obama's most bitter elected opponents came to his turf, on his terms, and he had the mike, not them. But like any gracious host, the president went out of his way to make them feel comfortable, no matter what they may say about his economic policies. He served up more of the unrequited bipartisanship that won him all of three Republican votes for the stimulus bill in Congress.

"There are going to be some differences, both within your state and in the country, in terms of how we address these [economic] problems," Obama said in brief remarks in the elaborately decorated State Dining Room, before he toasted the governors, in town for the annual meeting of the National Governors Association. "Here's my assurance. I know that each and every one of you are making the decisions you make, and taking the positions that you take, based on what is best for your state. And not every state's the same, and each of you have to take into account the particular characteristics and demographics and culture and perspectives of your states and your parties. But I want you to know that regardless of our occasional difference, and in this very difficult time, my hope is that we can all work together."

The sentiment was classic Obama -- seeking consensus, in this case seeking consensus over Wagyu beef, Nantucket scallops and three different wines. But some of the GOP governors, particularly a trio from the Deep South, didn't appear to share it entirely, no matter what kind of food and drink Obama plied them with. "We do not, in our state, pay unemployment compensation to people who are not willing and able to work full time," said Gov. Haley Barbour of Mississippi, the only one of the GOP holdouts who was willing to talk to reporters at the White House Sunday night. (Louisiana's Bobby Jindal and South Carolina's Mark Sanford, both outspoken grumblers about the stimulus money, didn't even break stride as they walked into the building.) "This bill would require us to change that, which would result in a large tax increase when the federal money runs out, and that's why we're not going to take it." (Some Republicans claim the federal stimulus money will force them to spend more on state benefit programs like unemployment insurance, even after the stimulus cash runs out.) It may be small consolation to unemployed Mississippians that Barbour said the rest of the money was OK by him.

Admittedly, the spectacle of Obama calling out Barbour, Jindal, Sanford and Idaho's Butch Otter to their faces, in person, during a social event, would have been a scene worthy of the other big black-tie function Sunday night. (Another Republican who's trying to appear resistant to the stimulus plan's charms, Alaska's Sarah Palin, didn't make the trip to the lower 48 for the governors' meeting; she stayed home to work on the state budget and do some political damage control. But the GOP pushback against the stimulus plan is transparently political, for the most part -- some of the governors who protested the loudest against being "forced" to take the federal cash have already folded, meekly, and even if the others hold fast, their state's legislatures can request the money anyway. Meanwhile, Republican governors who do not hail from reliably red states sought to create a little distance between themselves and the refuseniks. California's Arnold Schwarzenegger was openly mocking. "Gov. Sanford says that he does not want to take the money," Schwarzenegger said Sunday on ABC's "This Week." "I want to say to him, 'I'll take it.'" Charlie Crist, who publicly sided with Obama during the stimulus debate instead of with House and Senate Republicans, picked up that line as he arrived at the White House: "I think as my friend Gov. Schwarzenegger said, if there are others that don't want it, we'd be happy to take it to rebuild Florida, in my case."

The Obama administration, though, has evidently decided the best way to deal with the dissenters is to ignore them, in hopes they'll go away. Even Gov. Ed Rendell, a Pennsylvania Democrat who's an attack dog when he needs to be, seemed to have gotten the memo. "They're not not taking overall money, they're just not taking this one segment," Rendell told Salon when asked about the GOP grumbling on his way into Sunday's dinner. "It's very important to get that right."

Obama will host the governors again Monday for a more traditional business meeting. Sunday night, it was clear the White House had decided it wanted guests to dance, not debate. By the time the governors and their spouses (or, as in the case of Minnesota's Tim Pawlenty, their daughters) arrived in the East Room from dinner to listen to the music, administration officials and friends had taken up the six tables in the room; there was nowhere for the gubernatorial types to go except straight to the dance floor. Even there, though, the administration went the conciliatory route. Before Earth, Wind & Fire took the stage, a Marine Corps combo played a little Cajun music, a little ragtime jazz, and Lee Greenwood's "God Bless the U.S.A.," a song that Republicans can't seem to resist blasting over the sound system every time they gather. There, in front of the stage, Obama mingled with governors, Republicans and Democrats alike. And as he posed for pictures with his guests, he stopped every few seconds to sing along.