The state of Obama is strong

In a well-received speech to Congress, the president says the stimulus is working and better days are ahead. 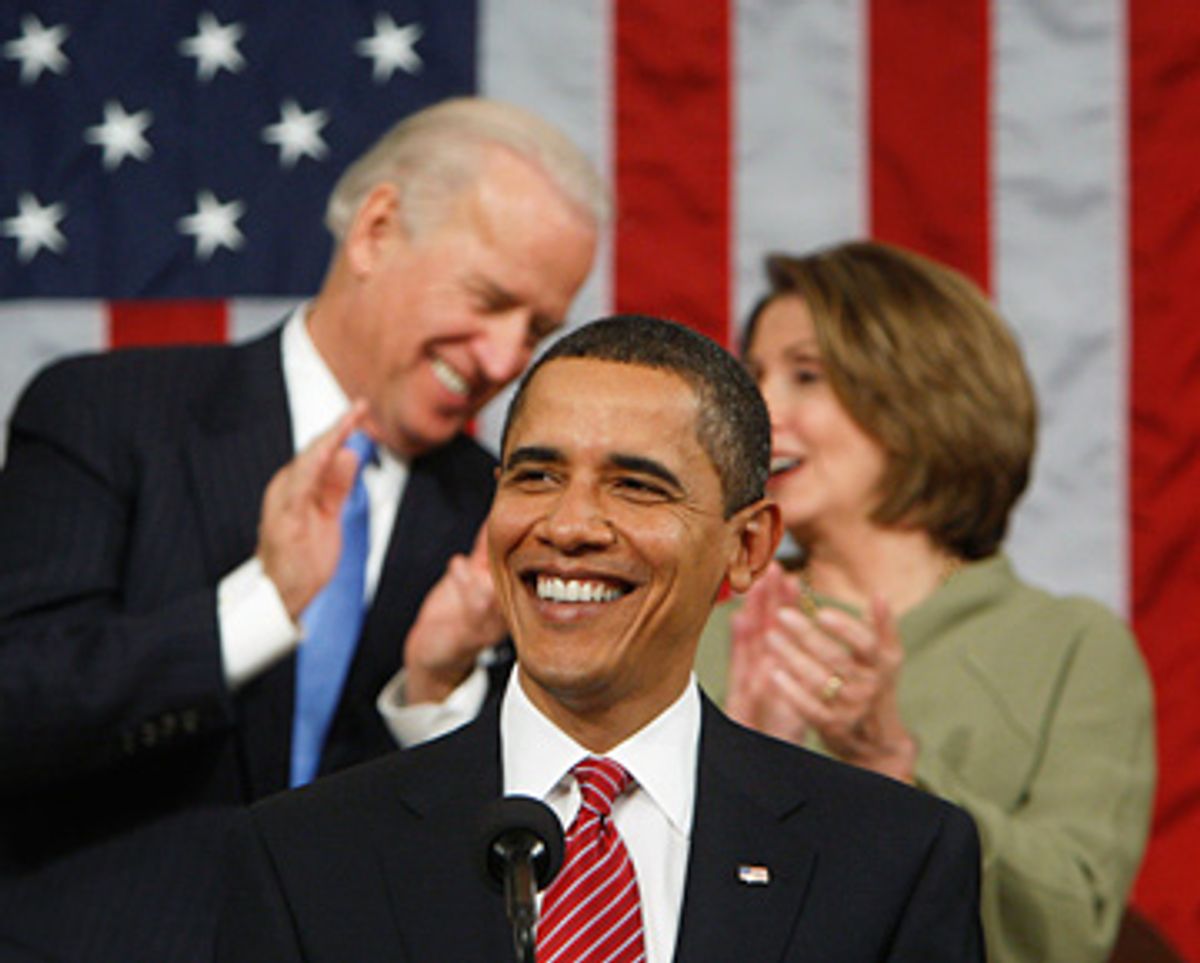 Technically, the speech President Obama gave Tuesday night wasn't a State of the Union address, even if the networks and cable channels treated it that way. He's been in office barely a month; by convention, presidents get a full year in power before they have to make the ritual declaration that the state of our union is strong.

And that may be why Obama felt free to dispense with that sort of boilerplate, and instead, direct America's attention to the ways the state of our union is, in fact, fairly precarious these days -- before pivoting to a call to band together, take collective responsibility for various messes in domestic and foreign policy alike, and work hard to make things better than they were before.

"What is required now is for this country to pull together, confront boldly the challenges we face, and take responsibility for our future once more," Obama said. "[A] day of reckoning has arrived, and the time to take charge of our future is here. Now is the time to act boldly and wisely -- to not only revive this economy, but to build a new foundation for lasting prosperity."

Instead of a State of the Union-esque laundry list of micro-policies, the speech looked back over the long Obama administration -- you know, all 36 days of it. The stimulus is already keeping cops on the beat in Minneapolis. The housing plan is already lowering interest rates and may have already saved you $2,000 this year. Your paychecks will be bigger on April 1 (if you still have a job by then, he didn't add). The White House must trust polls showing voters have high hopes for the stimulus plan to work; Obama doubled down on the already heavy political investment he's put in to back the far heavier financial investment the Treasury has laid down. A sly smile crept onto Obama's face as he described how the $787 billion stimulus "provides a tax cut -- that's right, a tax cut -- for 95 percent of working families."

There were some promises, though Obama kept them vague, perhaps because he knows the federal budget his administration will release on Thursday doesn't leave a whole lot of room to deliver on much besides immediate problems. The president wants a cap-and-trade policy for carbon emissions, and a big increase in alternative energy sources. He wants healthcare fixed, as soon as possible, though he didn't specify how. He wants all American students to commit to not only graduating high school, but to stick with it for at least one year of higher education -- whether it's a four-year college, a two-year community college, vocational training or an apprenticeship.

Some big topics didn't come up -- like immigration reform, which suddenly seems less pressing now that the recession has weakened the pull of U.S. jobs for foreigners. Or the upcoming fight in Congress about labor unions' drive to organize workers by collecting signatures rather than holding elections, which is likely to be as bitter as any of the battles over the stimulus were. And real-time fact-checkers found Obama fudged some of his stats and references; for instance, he implied the U.S. invented the auto, when, in fact, Germany did.

On foreign policy, Obama promised to work with, not against, the rest of the world in pursuit of common goals. He said the budget this week would increase the number of soldiers and Marines, a nod to his plans to send thousands more into harm's way in Afghanistan; he said nothing about when he would deliver on his campaign pledge to end the war in Iraq. But he did revisit another campaign theme. "Living our values doesn't make us weaker, it makes us safer and it makes us stronger," Obama said. "And that is why I can stand here tonight and say without exception or equivocation that the United States of America does not torture."

There were some hidden digs at Republicans, even as Obama tried to carry on the bipartisan image he's been cultivating since his election. "For too long, we have not always met these responsibilities -- as a government or as a people," Obama said. "I say this not to lay blame or to look backwards, but because it is only by understanding how we arrived at this moment that we'll be able to lift ourselves out of this predicament." That may be, but it was hard to listen to the indictment of the past few years that followed without thinking of George W. Bush. Obama pointedly noted that his administration inherited a massive federal deficit, a line Democrats seemed to love as much as Republicans seemed to hate it. And a section toward the end, about Ty'Sheoma Bethea -- a high school student from Dillon, S.C., who wrote to Washington pleading for more money for her crumbling school, and who sat with Michelle Obama in the first lady's box for the speech -- may have been meant as a tender moment. But it also seemed to be a not-too-subtle poke at South Carolina's Republican Gov. Mark Sanford, who's been telling anyone who will listen to him that he doesn't really want Obama's stimulus money.

His delivery, as usual, was masterly. The president seemed to recognize that the frequent applause -- the official White House transcript counted 71 interruptions -- wasn't drowning him out on the TV feed, only in the House chamber. So he kept speaking over the ovations, which added energy to the address without slowing it down; where Bill Clinton used to bask in applause, Obama used it to power himself along. The Republicans in the chamber sat on their hands as Obama ran through the highlights of the stimulus plan, but by the time he finished, he was winning bipartisan ovations for things like ending wasteful spending by CEOs (an easy target) and the G.I. Bill -- a less predictable applause line, given the GOP's intransigence lately on the question of whether the federal government can do any good.

For the Republicans in the room, the speech couldn't have been particularly pleasant. Polls out Tuesday morning showed Obama is still enormously popular a month into his term, more so than any president at this point in office since Ronald Reagan. And while the GOP has been congratulating itself for how well they can say no to whatever Democrats try to do, that strategy doesn't seem to be doing much for the party. Polling shows Republicans have mostly succeeded in shoving themselves further out on a limb; people think Obama has tried to work with the GOP, but that Republicans haven't reciprocated, and most see the GOP's stubbornness as motivated by politics.

And by the time Louisiana Gov. Bobby Jindal -- young, popular, Indian-American and, in GOP fantasies, the perfect answer to Obama in 2012 -- took to the airwaves a few minutes after Obama finished, he must have wished he was on Bourbon Street trying to catch a few Mardi Gras beads instead. Jindal delivered his rebuttal speech so quickly he seemed to be trying to get out the door to catch a ride from Baton Rouge to New Orleans before Lent began. Chirpily titled "Americans Can Do Anything," it sounded like a missive from the Land of Private Enterprise, where President Amity Shlaes welcomes you by closing down the government as soon as you arrive. In Jindal's telling, Louisiana recovered from Hurricane Katrina thanks to volunteers and local businesses, not hundreds of billions of dollars in federal aid. "The strength of America is not found in our government," Jindal said, trying to blunt the power of Obama's recitation of all that government was attempting to do to turn the country around. "[Republicans] believe the way to strengthen our country is to restrain spending in Washington, and empower individuals and small businesses to grow our economy and create jobs."

It was a speech that only Kathryn Jean Lopez could truly love. The hour-long address that Jindal was answering was far more effective, and not just because Obama read his lines better than Jindal did, or because the well of the House of Representatives makes for a better backdrop than the lobby of the Louisiana governor's mansion. The country is just now waking up, woozy, after eight years of rolling back the government's safety nets, regulatory frameworks and just about everything else that doesn't involve foreign invasions. Hardly anyone wants to hear a call for more of the same; the network instapolls after the speech showed voters responded well to Obama's version of change. And, of course, they responded even better in November.