From Cornel West in the back seat to Slavoj Zizek at the dump, "Examined Life" offers quick, witty, out-of-context doses of today's leading philosophers. 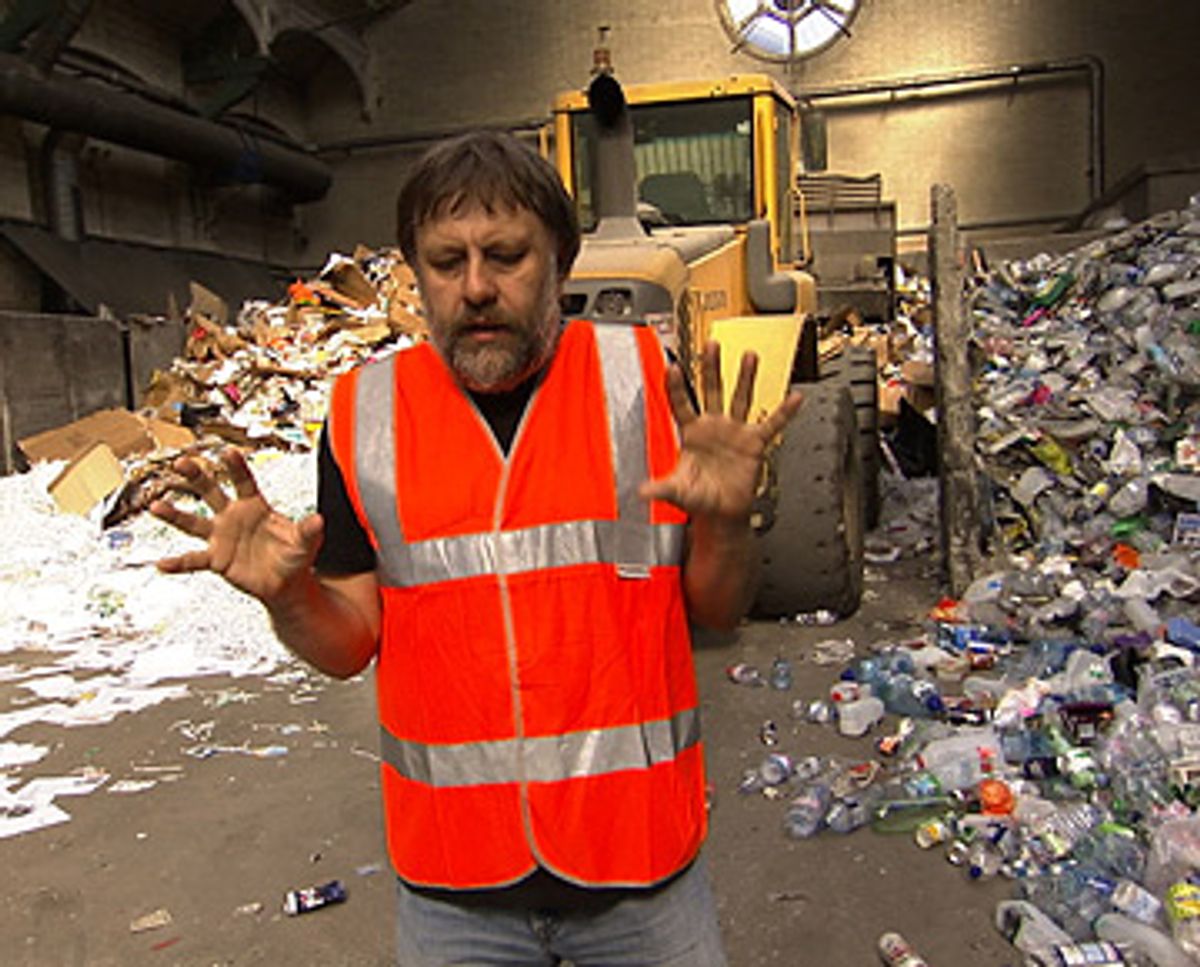 Astra Taylor knows she's a little over her head in the whimsical, earnest series of conversations with philosophers that makes up her film "Examined Life." But the young filmmaker uses that fact to disarm us, putting herself clumsily into the frame during a stroll in New York's Washington Square Park with inscrutable post-Heideggerian feminist philosopher Avital Ronell, who declares that she would like to interview Taylor, rather than the other way around.

As the scene continues, Taylor apologizes for the shallowness of trying to present an introduction to several important contemporary philosophers in an 85-minute feature film. Rather preeningly, Ronell quips that it's fine that the other philosophers in the film are restricted to 10 minutes each, but she should not be subjected to such an indignity, and then launches into an extended monologue about the healthy uses of anxiety and meaningless in the postmodern world. It's good to feel bad, more or less. OK, she doesn't actually say "postmodern," but she might as well. Meanwhile, Taylor's camera wanders around the park, capturing the book-readers and iPod-listeners and park-bench smoochers and frolicking dogs in the middle distance while Ronell keeps talking. One of these people has just been made to look like an ass, and it isn't Taylor.

I'm not suggesting that Taylor set out to sandbag or ironize her subjects in "Examined Life." In fact, I'm quite sure she didn't. But as with Taylor's previous film, "Zizek!" (whose subject, the Slovenian madman Slavoj Zizek, appears here at a London garbage dump, claiming that mankind isn't alienated enough from the natural world), the movie has a philosophical element of its own that is not free of guile. By conducting her conversations in public spaces, and removing her interlocutors from desks and offices and book-lined studies and other appurtenances of intellectual authority, Taylor introduces a degree of playfulness and unpredictability that becomes the movie's M.O. Trying to rehabilitate the concept of revolution while rowing in the Central Park lake, post-Marxist philosopher Michael Hardt literally runs aground on a half-submerged boulder. I'm far more sympathetic to Hardt's intellectual project than I should admit, but, really, what can you say?

Cornel West, perhaps America's only celebrity philosopher, serves as a sort of muse or chorus to the film. He's the only one whose interview is chopped into fragments, and he does all his talking from the back seat of a car as it creeps or roars through Manhattan traffic. It's a great setting for West's hyperbolic, high-velocity rant, in which he defends philosophy as first of all a self-interrogation, an attempt to negotiate with death, desire and dogmatism. It's a brilliant performance, larded with a spectacular level of name-dropping -- from Plato to Vico to Goethe to Melville to Beethoven to Chekhov to Charlie Parker -- and best appreciated, I suspect, for its style rather than its substance.

"Examined Life" has a certain flavor of intellectual game show or high-concept magazine article about it, and I say that with affection. (Taylor has also worked as a journalist, including at least two articles for Salon.) Drag these people out into the real world, urge them to riff rapidly about the issues nearest and dearest to them and, at least by implication or context, make them compete with each other. In fact, there is known bad blood between two of Taylor's subjects, queer-theory pioneer Judith Butler and University of Chicago political philosopher Martha Nussbaum, although that's not mentioned.

You could view this format as manifestly unfair to those philosophers who are unfamiliar or uncomfortable with becoming pop-culture performers as West has done, or you could decide that that's part of the job description for a public intellectual these days, and they'd better sharpen up. Be that as it may, Nussbaum is an eminent thinker on the page, but comes off as pretty dull while walking along the shoreline of Lake Michigan, opining on the limits of the 18th-century social contract. Anglo-Ghanaian philosopher Kwame Anthony Appiah wanders through a Canadian airport, uttering bland generalities about globalization and the value of cosmopolitan tolerance and generally making you glad you don't have to sit next to him for an entire flight. I'm sure Michael Hardt regrets that rowboat ride, although he did get to see a whole bunch of Central Park's basking turtles (the descendants of abandoned pets).

On the other side of the coin, I've always found Judith Butler's books and articles almost unreadable, but Butler is charming, prickly and graceful while strolling the streets of San Francisco's Mission District alongside painter and disability-rights activist Sunaura Taylor (the filmmaker's sister), discussing what it means for a person in a wheelchair to "take a walk." Coming between the overly obtuse Ronell and the overly obvious Appiah, ethicist and animal-rights advocate Peter Singer functions as a highly effective blunt instrument, walking down Fifth Avenue and calmly informing the camera that we have an unmet responsibility to starving children and tormented animals that is being undercut by selfish consumerism.

When Taylor returns to West in the back seat of that car for the film's ending -- yes, philosophers have a responsibility to combat nihilism and point the way toward a meaningful life, he says -- we eventually notice that she herself is driving the car, which could be low-budget practicality and could be some kind of philosophical witticism. After delivering his final bons mots, West gets out of the car at Union Square to head for the subway, and about three seconds later is accosted by a young and attractive blond woman who wants to say hello. Like pimpin', philosophizin' ain't easy.

"Examined Life" is now playing at the IFC Center in New York. It opens March 6 in New Orleans and San Francisco, April 3 in Boston, April 10 in Portland, Ore., April 17 in Denver, April 23 in Ithaca, N.Y., April 24 in Seattle and Coral Gables, Fla., May 1 in Los Angeles and Santa Fe, N.M., and May 15 in Santa Cruz, Calif., with more cities to be announced.