Why is John McCain being such a jerk?

The post-election lovefest is over. The defeated senator has even learned Twitter to attack Obama. But don't call him jealous. 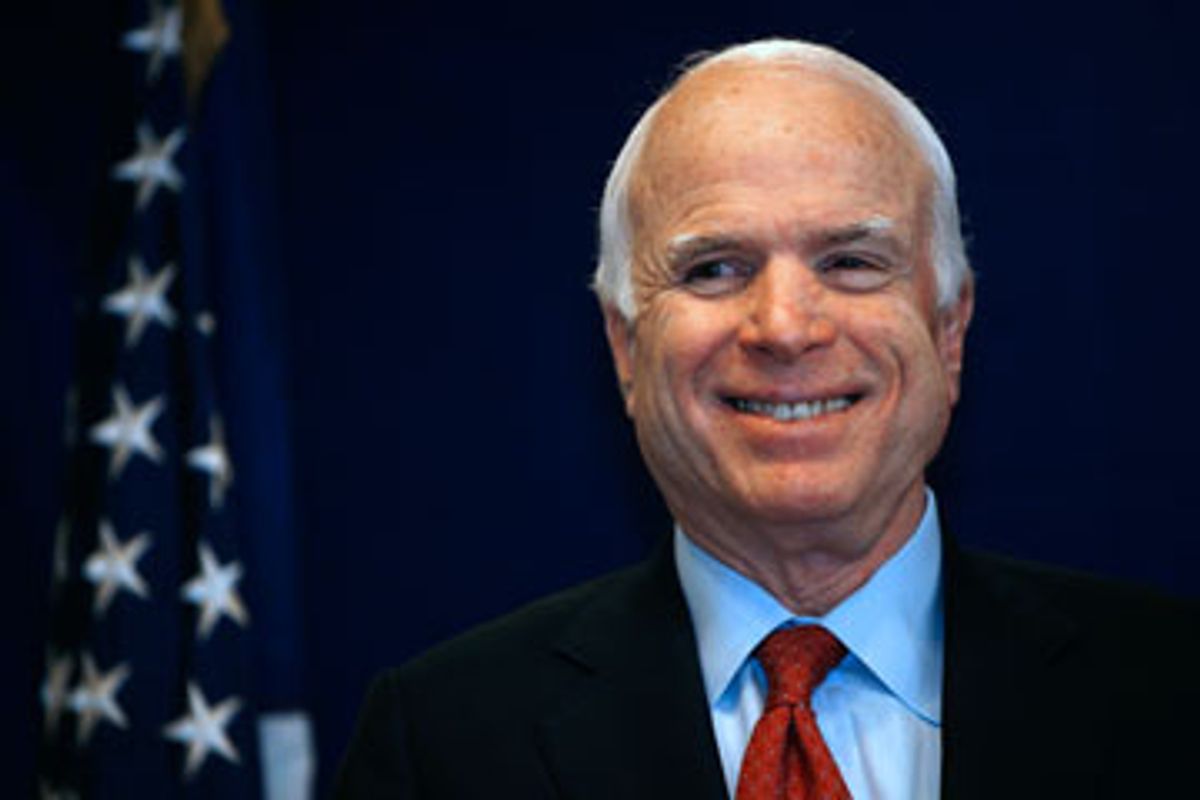 A couple of weeks after Barack Obama beat John McCain in the election last year, the former rivals got together in Chicago for a friendly chat. The meeting went so well, despite the months of political combat, that they issued a joint statement afterward, promising to work hand-in-hand to reform government. The night before Obama took office this year, he threw a dinner in McCain's honor. Both men said they hoped they could put the bruising campaign behind them.

Which is why the way McCain is spending his time less than two months later is a little strange: Lately, he seems to be going out of his way to remind the country of how much he and Obama disagree. Two weeks ago, at a White House fiscal responsibility forum, he called out the president  on the cost of his helicopter (a helicopter ordered during the previous administration). Last week, McCain spent hours on the Senate floor helping to lead GOP opposition to a bill to give the District of Columbia a vote in the House, a measure Obama supported as president and is expected to sign if it makes it through Congress. And this week, he's gone after Obama explicitly -- and repeatedly -- over about $7 billion worth of earmarks in a massive "omnibus" spending bill that costs more than $400 billion and wraps up three-quarters of the federal government's discretionary spending for the current fiscal year in one big package. "Americans all over this country hope for change," McCain said in a Monday afternoon tirade in the Senate. "They hope the corruption, earmarking and pork-barrel practices will stop. What are we giving them? We are giving them a slap in the face, that is what we are giving them ... So much for the promise of change." McCain got so worked up about the spending bill, in fact, that he learned how to use Twitter last week, taking over from the aides who used to post for him, and began publishing snarky 140-character wisecracks about individual projects. He has complained about money for "Mormon cricket control" in Utah, the teaching of "art energy," and a telescope in Hawaii. ("Nothing says new jobs for average Americans like investing in astronomy.")

Unlike during the campaign, Obama and his aides haven't taken any of the bait; the White House has studiously avoided engaging in a debate with McCain, even while Obama aides push back against more general complaints about the spending bill. Which makes the spectacle of a scowling McCain railing about the way the administration is handling the spending bill even stranger. "The president's budget person says, 'We want to move on,'" McCain said Monday. "That is insulting to the American people." The diatribes are getting McCain plenty of exposure on cable news, but they're also starting to make observers wonder if the man who rolled his eyes at "that one" during the presidential debates is having trouble moving on from last November's defeat.

McCain, at least, says that's not what's going on. At a Capitol Hill press conference Wednesday morning to introduce legislation to give the White House a line-item veto, McCain made a special point of bashing the Obama administration's handling of the omnibus bill again. But then he sounded shocked when Salon asked him whether there was any trouble in his relationship with the president. "I'm the -- as I said, the loyal opposition," McCain said. "Both words [are] operative. I want to work with the president where we can, and I have on several issues."

That's certainly true; McCain went straight from the press conference to the White House, where he was the only Republican to join Obama at an event where the president called for the Pentagon to stop wasting money on bloated private contracts. A few days before, McCain gave his support to Obama's plan to withdraw troops from Iraq, though he had hammered Obama during the campaign for proposing that very idea. Even the helicopter complaint at the White House came in the context of procurement reform, which Obama's advisors had already reached out to McCain on, knowing they could find common ground there.

"None of this means anything in terms of where McCain's going -- he's getting mad at the White House, he's not getting mad at the White House, or he's bitter from the election or he's not bitter from the election," one McCain advisor told Salon. "It means just what it always means from McCain -- what you see is what you get." McCain has no problem grumbling about Obama on one issue, then driving up Pennsylvania Avenue to work with him on another -- even if the rest of the political world is likely to ask what he's up to. (That unpredictability, mixed with rage, is precisely what drives Senate Republicans crazy about McCain at times.) McCain's allies say he also popped off at George W. Bush on spending, as well, but considering that Bush, like Obama, also beat McCain in a presidential campaign, that may not be much of a defense. It's hard to imagine he doesn't realize calling out Obama will make news, or that people will wonder if the fact that Obama remains far more popular than he is might be what really bothers him.

But even if McCain is just swinging away at runaway federal spending -- a foe of his long before he ever heard the name "Barack Obama" -- he may not be doing himself many favors in the process. For one thing, much of the money McCain has attacked in the spending bill would fund scientific research. The names of the individual projects may be easily lampooned, but as Bobby Jindal discovered last week, just because something sounds silly doesn't mean it's smart to bash it. For another, Republicans -- who, unlike Obama, actually still have the power to put earmarks into legislation -- are certainly taking their share of pork in the spending bill. McCain acknowledged that, but still bashed the White House for not taking a harder line on spending.

At a deeper level, though, in light of the massive problems the government is trying to deal with, it's hard for anyone except McCain to get that worked up over the earmark battle. He and Obama covered all this ground during the campaign last year; during the presidential debates, voters could be forgiven for thinking McCain's entire economic plan boiled down to eliminating earmarks. Voters evidently weren't sufficiently moved by McCain's anti-earmark outrage to put him in office. "There's a reason he's not president -- this stuff is just tiresome, and it's not what people care about these days," said a Democratic operative who worked on the campaign last fall. Could you argue that, as McCain says, there's something ridiculous about spending $380,000 on a "recreation and fairground area" in Kotzebue, Alaska? Sure -- though McCain might know someone in Alaska who would disagree. But after eight years of the policies McCain mostly promised to continue if he won the election, eliminating the millions -- or even billions -- of dollars that get sprinkled around on lawmakers' pet projects isn't going to fix much.