It's an absurd argument, but that's where populist rage on the right is heading. 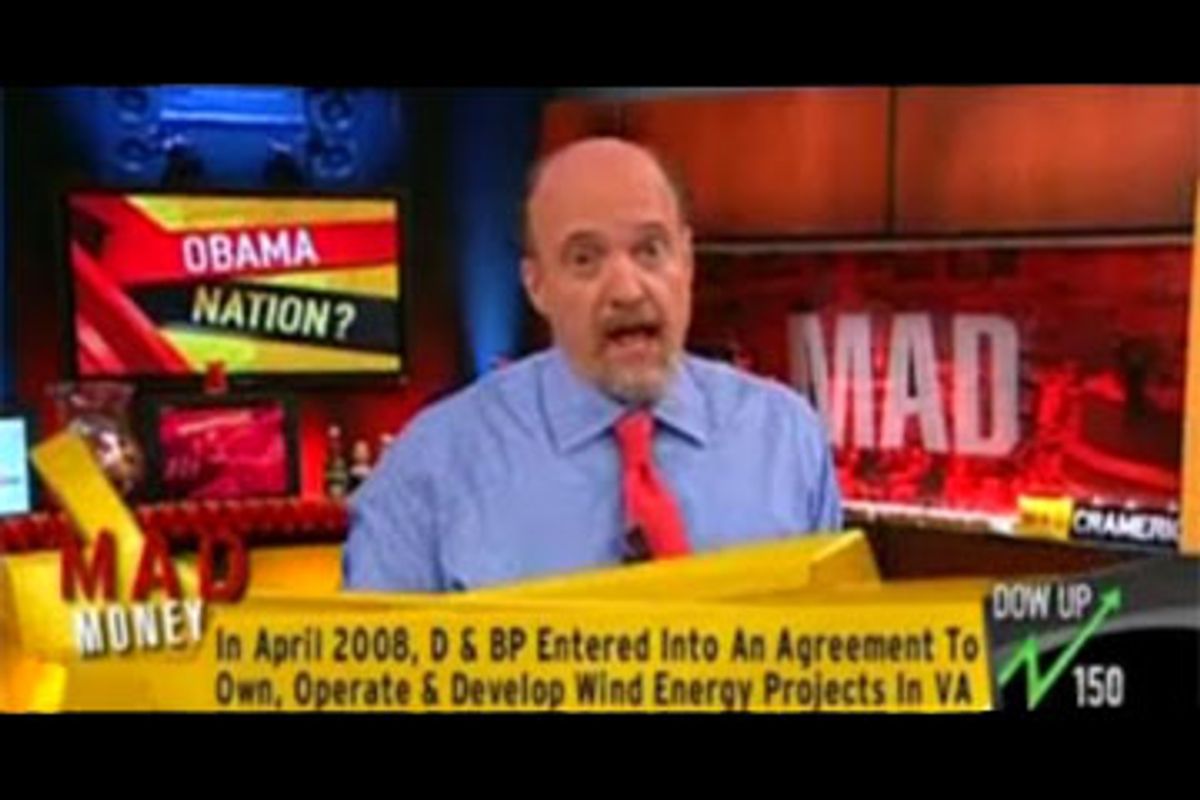 Is Obama responsible for the meltdown of the Dow? The consistently wrongheaded Wall Street Journal's editorial page says so, as does Republican Fox News, CNN's reliably demagogic Lou Dobbs, and now CNBC (where, full disclosure, I frequently appear as a token liberal). CNBC's Jim Cramer, who bloviates nightly about stock picks, says Obama is pushing a "radical agenda" that's destroying investors' wealth. My friend Larry Kudlow, who rants nightly about nearly everything, says Obama is destroying capitalism. CNBC reporter Rick Santelli's ballistic nonsense about Obama's mortgage plan made him a pop-populist icon for a week or so.

The argument that Obama is somehow responsible for the collapse of Wall Street is absurd. First, every major policy that led to this collapse occurred under George W.'s watch (or, more accurately, his failure to watch). The housing and financial bubbles were created under Bush and exploded under Bush. The stock market began to collapse under Bush.

Second, it's inevitable that stocks, led by the bloated financial sector, would lose their remaining hot air as the new administration begins "stress-testing" the big banks, many of which are technically insolvent. After all, their share prices were built on a tissue of lies and dreams. Other sectors whose values were similarly distorted and distended by years of financial deception and regulatory disregard, such as housing and insurance, will also have to return to the real world before they can recover. Which could mean more stock losses.

Finally, none of the financial wizards who are now charging Obama with leading America into the abyss have offered an alternative plan for getting us out of the mess that, not incidentally, many of these same wizards happily led us into. For years, the Wall Street Journal editorial page and the financial gurus of cable news cheered as Wall Street leveraged its way into oblivion.

This bizarre charge wouldn't be worth mentioning were it not a market test for a more intense attack from Wall Street and Republican media outlets next year as the nation moves into the gravitational range of the 2010 midterm elections. Republicans have made no secret of their wish to blame Obama for the bad economy, and to stir up as much populist rage against his so-called socialist tendencies as politically possible. History shows how effective demagogic ravings can be when a public is stressed economically. Make no mistake: Angry right-wing populism lurks just below the surface of the terrible American economy, ready to be launched not only at Obama but also at liberals, intellectuals, gays, blacks, Jews, the mainstream media, coastal elites, crypto socialists, and any other potential target of paranoid opportunity.

To complicate matters for Republicans, however, grass-roots populist rage is also building against Wall Street itself, and with some justification. Top Wall Streeters who raked in tens of millions of dollars a year for more than a decade have now effectively eviscerated the pension fund savings of millions of middle-class American workers and destroyed millions of Main Street jobs. The public is understandably appalled that its tax dollars are being used to pay and prop up the very people and institutions responsible for this debacle. And there seems to be no end in sight: Citigroup and the insurance mammoth AIG, in particular, have become giant ongoing sump-pumps for tens of billions of public dollars. Yet no one seems to know exactly where these dollars are going, or why.

Worse: When it turns out that people like Lloyd Blankfein, the CEO of Goldman Sachs, who took home $68 million in 1997, was the only Wall Streeter in a meeting last September at the New York Federal Reserve to discuss the initial AIG bailout with Tim Geithner, then New York Fed chair, among others, at the very time Goldman was AIG's largest trading partner, a distinct scent of self-dealing begins to emanate. When it turns out that Citigroup got a bailout deal last October far more generous than that given to any other distressed bank, when a top Citi executive was advising the Treasury and Fed, the scent increases. Goldman's past CEO was treasury secretary at that time, by the way, and another former Goldman CEO was a top Citi official and also a former treasury secretary. I am not suggesting anything so crude as corruption. But could it be, given these tangled webs, that -- innocently, unintentionally, perhaps even subconsciously -- the entire bailout effort was premised on saving these companies rather than protecting the public? Or that the distinction between the two was lost, and still is?

The Wall Street and Republican media attack machine doesn't know exactly what to make of this. The Wall Street Journal's editorial page, along with CNBC, alternates between attacking Obama for bailing out Wall Street and excusing Wall Street's excesses. But then again, Obama doesn't seem to know exactly what to make of it either. He seems to vacillate as well -- one moment scorning Wall Street, the next moment justifying further bailouts. I do hope he takes a firmer hand, drawing a clearer distinction and making a clearer connection between clearing up these financial balance sheets and helping average people. Otherwise, the next populist uprising will be born in this moneyed quagmire. It is here -- within the muck that was created by AIG, Citigroup, Fannie and Freddie, other giant financial institutions, now in combination with the U.S. Treasury and Fed -- that the public is most confused, bears its most serious scars, and is potentially most burdened in future years, by decisions still made in secret.