The President records a video message that is a marked departure, both in tone and content, from the last 30 years. 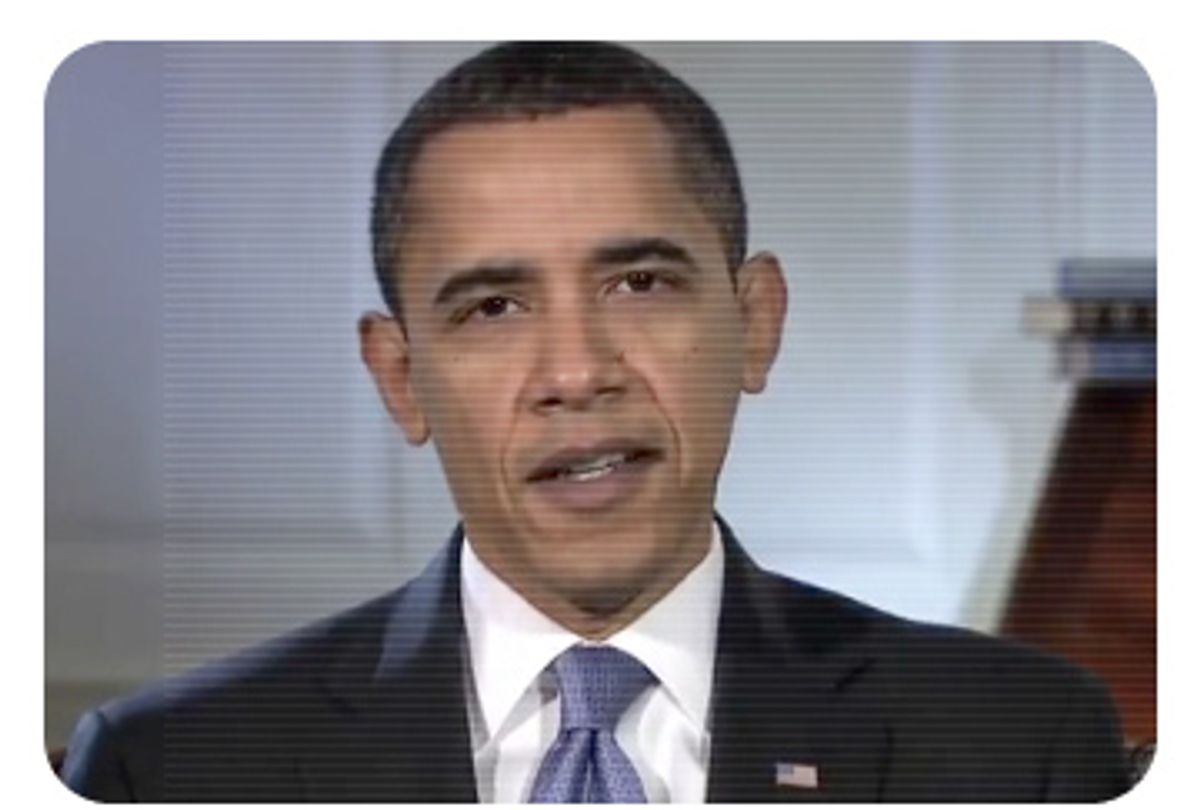 There will be no shortage of people attacking this as a Chamberlain-like capitulation to the Evil Persian Hitlers, and there will be an equally vocal group mocking it as an empty gesture from America's bloodthirsty and war-craving emperor.  It's true that, ultimately, this will only be meaningful if followed up by action, but this video -- sent by Obama to Iran, and to Iranians, for Nowruz, a major national holiday, and released this morning -- is, after 30 years of nothing but threats and hateful rhetoric exchanged between the two countries, a palpably different message not only in tone but also in content.

It explicitly repudiates threats and is also deeply respectful not only of the people of Iran but also of its government.  After observing that "for nearly three decades, the relations between our nations have been strained," Obama repeatedly emphasizes "a promise of a new day"; never once mentions Iran's nuclear program; and vows:  "my administration is now committed to diplomacy that addresses the full range of issues before us, and pursuing constructive ties between the U.S., Iran and the international community. . . . This process will not be advanced by threats.  We seek instead engagement that is honest and grounded in mutual respect."

It's easy to dismiss and mock if that's what one really wants to do.  And the caveats and causes for skepticism are obvious (it's just a video; there was nothing done about the war in Gaza; he just signed this last week, etc. etc.).  But it's inconceivable that anything like this video would have been possible at any point during the last eight years or even the couple of decades prior to that.  The protests that the video will inevitably provoke by itself demonstrates that it is a political risk.  Genuine expressions of respect, symbolic though they might be, can transform relations between previously hostile people and countries.  Politically-motivated demonization (of the U.S. by Iranian hard-liners and of Iran by American and Israeli hard-liners) becomes more difficult when this is the tone that prevails and this is the face that is shown.  And rapprochement, if it's to happen, can only begin with steps like this.

It may be that the Obama administration wants a diplomatic solution with Iran out of necessity and it may be that this is just a fig leaf designed to placate various factions.  Only time -- and subsequent actions -- will tell.  But whatever else is true, it is a weak, decaying and insecure nation that beats its chest and relies on ugly threats to establish its "toughness" and "credibility" with the world, while the mark of a strong and confident nation is the willingness to take a first step like this one towards its adversaries:

UPDATE:  As Laura Rozen reports, at least some long-time critics of U.S. hostility towards Iran perceive Obama's message as quite significant:

"This is huge," said Trita Parsi, president of the National Iranian American Council, a group that supports U.S. engagement with Tehran. "First of all, he is addressing the people and the government, which has not been done before. At one point he talks about the Islamic Republic. He's signaling he’s not looking for regime change; he’s recognizing Iran’s system. . . .

Parsi also found remarkable Obama's comments that he recognized Iran has a "rightful role among nations." . . . "He is making it clear is that where he wants to end up through diplomacy which he supports is a constructive, positive relationship with Iran, to put aside our enmity. That is huge."

The BBC describes it as "an unprecedented direct video message to the Iranian people," though I think the more notable part is how it refers to and addresses Iranian government leaders.

On a related note, The Washington Post today -- in an article headlined: "Israeli Coalition Appears Fated to Clash With U.S." -- predicts increasing tension between the U.S. and Israeli Governments over a variety of issues, particularly West Bank settlements and the peace process, in light of the new right-wing coalition emerging in Israel.  A couple of weeks ago, I noted some subtle, promising shifts in U.S. tone and even actions towards Israel.  Again, how genuine it all is remains to be seen, but subtle and preliminary steps like these are prerequisites to more positive developments in our Middle East policy.

UPDATE II:  Congratulations to Robert Spencer of "Jihad Watch" for being first out of the cliché gate:

Obama's message to Iran, delivered on the occasion of Persian New Year, looks like more appeasement. His fellow appeasers (Solana) are enthusiastic about it, and the objects of the appeasement (the mullahs) are reacting with a predictable uptick of aggression and bellicosity. . . . Appeasement breeds aggressiveness.

Who will be the first to scream about 1938, Czechoslovakia and Obama's umbrella?  There are so many options, but only the foolish among us would bet against the award going to someone from Commentary, The Weekly Standard, or one of the AEI "scholars," though Marty Peretz is always a nice dark horse in these Nazi-platitude contests.

UPDATE III:  That didn't take long.  We now have a winner in the 1938/Czechoslovakia contest, and it's a good one (it's "Pajamas Media," so it barely counts, but the winning Nazi-invoker is also with the Foundation for the Defense of Democracies and the Hudson Institute, so, using a permissive standard, this should probably be deemed eligible).