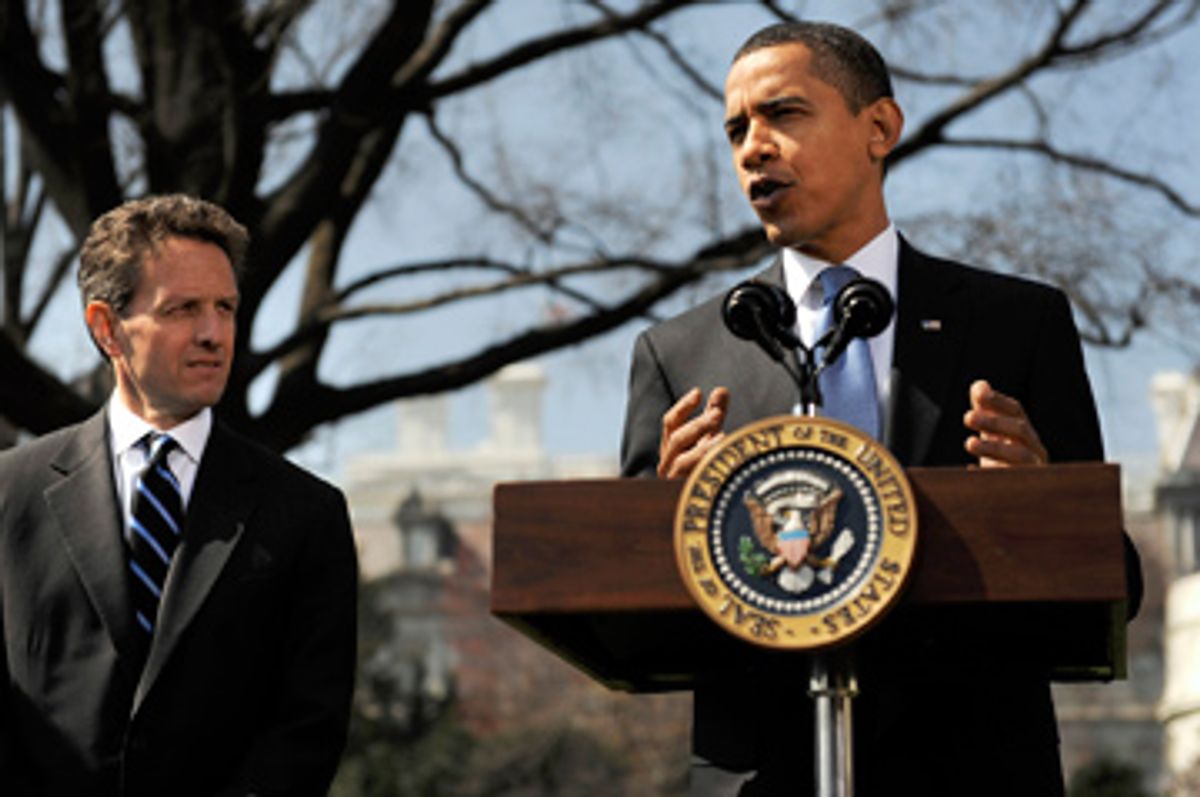 AIG is rapidly becoming a nightmarish metaphor for the Obama administration's problems administering the bailout of Wall Street. One central problem is the lack of transparency. According to some news reports, Treasury Secretary Tim Geithner knew weeks ago that AIG was planning to issue the bonuses to executives in its notorious credit default swap unit, and felt it was contractually bound to do so. But even if Geithner discovered all this just last week, he faces an awkward question about why he didn't know sooner. These bonuses in fact were only the latest in a series, and were not even distributed until last Friday. But it was not until Saturday, after the story leaked to the press, that Geithner went public to express his "outrage" about them.

Meanwhile, the Treasury has been readying yet another big multibillion-dollar payout to AIG on top of the $170 billion already provided the company, because AIG has been hemorrhaging red ink. The company's balance sheets have been deteriorating far more quickly than the Treasury had anticipated. But there's been no clear exit strategy for stopping the flow of taxpayer money.

What’s particularly embarrassing for the current administration is that it had promised to undertake the Wall Street bailout far more transparently and effectively than the way the Bush administration went about it. The Obama administration had assured the public that, among other things, taxpayer money would no longer be used to backstop Wall Street bonuses. (It’s worth noting, in this regard, that the related plan put forward by the Obama Treasury to limit executive pay in Wall Street firms that received bailouts turned out to be riddled with holes.)

We've also learned that much of the $170 billion has been used by AIG to pay off AIG's putative obligations to other Wall Street banks such as Goldman Sachs. Goldman has maintained that it got no bailout money from the Treasury. But in fact it received some $13 billion through AIG. More troubling is that the original plan to bail out AIG was concocted at a meeting held last fall, run by then Treasury Secretary Hank Paulson who, before becoming treasury secretary, had been CEO of Goldman Sachs. Also attending the meeting was Lloyd Blankenfein, the current CEO of Goldman Sachs. Also at the meeting: Tim Geithner, then head of the New York Fed.

None of this would be nearly as awful if the Wall Street bailout were working. But here we are six months after it began and it’s still the case that almost no loans are being made to Main Street. This week the Fed is launching its own program to get loans to consumers financed by private investors, in effect bypassing the big Wall Street banks.

The Wall Street bailout is starting to look like the most expensive tax-supported fiasco in history. The problem for the Obama administration is that this bailout is near the very center of the president’s economic recovery program. It's not possible for the economy to bounce back until credit markets are working again. Yet even though the bailout so far is a bust, Geithner still hasn't decided -- or told the public -- how he's going to use the remaining $300 billion of bailout money differently.

The president cannot afford to lose the public’s confidence that his administration is a careful steward of the public’s money. The public was willing to go along with a large stimulus package. But it won’t go along with a second stimulus, and certainly not another TARP. And until the public feels confident that its money isn’t being thrown down a rat hole, it may balk at other ambitious undertakings such as healthcare or education or the environment.