As he prepares to return to Iraq, the MTV reality show star discusses how it feels to be redeployed -- and to learn about it on camera. 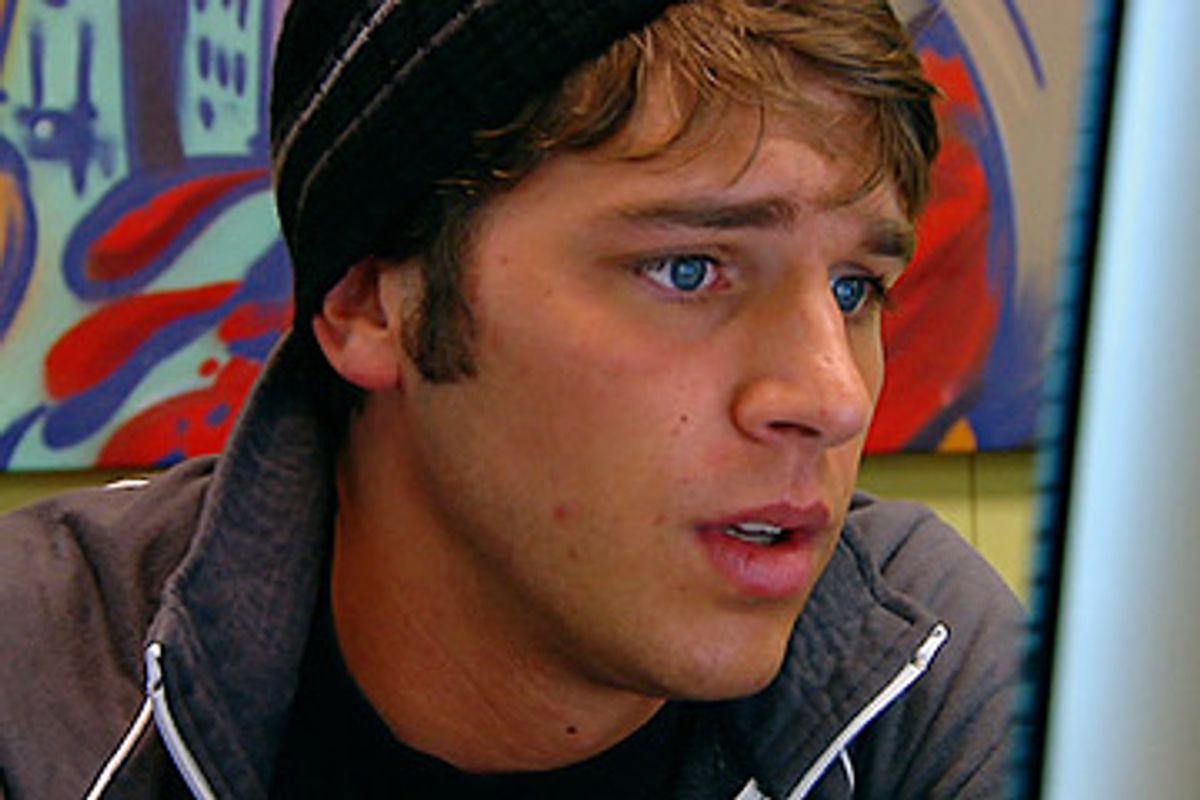 It's hard to take reality TV seriously, especially the granddaddy of them all, MTV's "The Real World," which pulls together an attractive crew of 20-somethings cast to clash in pretty predictable ways. But the show's 21st season, "The Real World: Brooklyn" (which has its finale Wednesday night), surprised us. Set in a tricked-out loft overlooking a glistening Red Hook waterfront, it wasn't the expected cast members -- newly transgendered Katelynn, kooky Mormon Chet, sexual-abuse survivor Sarah -- who drew our attention. It was Ryan Conklin, the charmingly hammy 23-year-old Iraq war veteran. Conklin seemed to fill the role of the sheltered, small-town guy who would bristle at his roommates's differences and show flashes of intolerance, before ultimately learning to be a better person. It's a tried-and-true reality show narrative. But while Conklin did provide a few early awkward moments (befuddled by Katelynn, who had not yet explained her gender status, he referred to her once as "it") he proved the warmest presence on the show: a good guy eager to absorb all New York has to offer, entertain his roommates with spoofy songs on his guitar, and go to school to study film. Until, that is, he got a fateful call.

Late in the series (when it was shot in mid-November), we see Conklin talking on the phone with his brother, who grimly informs him that "you got the packet in the mail that you've been dreading."  His brother tells him that he's been called back to Iraq through the Individual Ready Reserve (IRR), a program that allows the Army to recall soldiers who have completed their tours of duty. Conklin goes through a rapid succession of denial -- "Don't mess with me," he says, convincing himself his brother is lying to him -- and frustration, before crumpling into tears to a roommate. "I don't want to put my parents through that again," he says, his voice fading to a whisper. It's a soul-crushing scene, far more real than we're prepared to expect from television.

Conklin enlisted in the Army at age 17 after the events of Sept. 11, 2001. Although he tries at first to keep quiet about his service ("I wanted them to get to know me for me," he says), the MTV series skillfully reveals him as a young man dedicated to his country.  He's also opposed to the war, and the series films him becoming involved with the activist group Iraq Veterans Against the War.  Not long after we see Conklin celebrating the election of Barack Obama, who he -- and so many others -- hopes might be able to bring the war to a quick end,  he learns he's been called back into service.

Conklin, who reported for duty in late February, now expects to spend the next year as part of an infantry division. Salon reached him Tuesday by phone, where he spoke about the reaction to the show he's received from fellow soldiers -- and the Army -- and his own morale as he prepares to redeploy. (You can listen to the interview here.)

Do your fellow infantrymen recognize you? Do they have a reaction to the show?

Some do, and some don't have a clue and that's totally cool. Kind of back when I first started in the "Real World" house I didn't want to tell anybody that I was in the Army because I wanted them to get to know me for me. It's kind of the opposite here. I don't tell anyone I was on a TV show because I want them to get to know me for me as a soldier. And the ones that do recognize me, which is weird because I have a haircut and I'm in a uniform like them ... they don't really give me any crap. There's questions, obviously; the common question is, "What was it like living with a tranny," stuff like that. Or [having] the cameras always around. I know that I'd be inquisitive myself if someone from "The Real World" was in my platoon. So it's funny, it's cool. It's all right.

On the show you were frank in your opposition to the war, especially the "backdoor draft" [referring to the military's stop-loss program]. Did you get any push-back from the Army in regards to that?

No, I'm pretty frank with things; the Army never stepped in to say don't say this or don't say that. I wouldn't care if they did anyways, because I really don't care if my mouth gets me in trouble or anything. If it needs to be said I'll say it. But no, I haven't really run into any censorship, if you will, from them.

Last week, there was an announcement from Defense Secretary Robert Gates that they are phasing out stop-loss, with Gates blaming it for "breaking faith" with the troops -- and that it will be phased out by 50 percent next year. Did you hear that?

That's good. "Breaking faith" with the Army, that's funny, that this many years with the stop-loss policy they start getting rid of that. It only took them several years and the high suicide rates to catch on to that, but that's one good step that they're doing. I was stop-lossed last time I was deployed, and held past my time.

You talked on the show about being interested in film. Were there any opportunities that arose after being on the show that are now on hold?

A lot of opportunities did come up. I've met a lot of people and there are a lot of avenues that I want to approach and get into. I'm going to continue talking to people. Obviously there's work with the IAVA and veterans organizations that I want to get into. Film, I plan on going back into, majoring in it. That's my passion and I can see myself doing that as long as I'm alive, I guess. Music obviously is always still there; that's more of a hobby than a passion. I don't feel like I'm missing out on anything right now. It's giving me time to think about things, organize things, and tackle them when I get home.

What did you learn from the "Real World" that you actually can bring to the real world?

To be more open-minded. I guess coming in from a small town and only having the Army experience behind me, which was like living in a fraternity house ... I learned to be more open-minded with  different things. Whether I accepted them or not, at least I was open enough to experience them. Things with everybody in the house that I got involved with. Art with Sarah, music or interviews with Chet or hearing about the life choices of being a transsexual with Katelynn or the homosexual community with J.D. I never wanted to say no to anything, because it's a once in a lifetime opportunity ... I wanted to take advantage of everything. That's one good thing to have in life is to be open to anything and everything. That's what makes life cool.

Is there anything you learned from being in the military that  helped you when you were in the house?

Did you disagree with the way anything was portrayed on the show?

The scene where I lash out at J.D. ... yeah it went down, yeah I  yelled at him for that situation. They didn't really show me laughing my ass off after that with Chet. We made a whole joke about it, and they didn't really show us joking before or after, they just showed me yelling. And then they used a clip of J.D. saying, "I think he has [post-traumatic stress disorder]" and Scott saying maybe he heard bombs in Iraq. And as the viewer, the way they see it is Ryan has a severe case of PTSD and he screams a lot. That was one thing about the show that got me when I watched the  episode --  people are going to think I'm crazy. And that's not it at all, that situation didn't really happen like that whatsoever. At the end of the day it's a TV show, so everything is edited in a certain way. That's really the only bumpy spot I saw on the show.

What was it like to watch the episode where you learn you're  going back to Iraq?

It was kind of like I was watching someone else. I was kind of in a fog when I got that call. I wanted my brother to be joking so bad.  Watching the episode, I'm like, damn, I don't even remember half of  this conversation, I don't remember cracking my knuckles, it felt like watching somebody else.

Do you know where you're going and for how long?

It's going to be Iraq. I think we should be somewhere in southeast Baghdad, from the rumor wheel that's going around right now. We should be leaving April 15 or 16 out of Fort Bragg, N.C. I think it's going to be a year deployment or 10 months. I'm not sure. For being called up in the IRR they can hold us no longer than 400 days according to the orders.  I wouldn't be surprised if the Army wizard waved a magic wand and kept us in, but it should be no more than March 15, 2010, and then my eight-year contract ends -- June 2010 and I can never be called back. So somewhere around there I'll be pretty happy.

And will you stay in touch with your roommates when you're over there?

Best I can. Family first, roommates and friends second. Some of my roommates I'm really close with. I'm always talking with Baya, Chet  and Scott. So those guys are my family anyway, so I'll keep in touch.

Will you do video from Iraq?

Yeah, I'm trying to set up a Web site now that follows my trip , a place where I can post stuff.

As you do these media interviews, has anyone in the Army told you to be careful what you talk about?

No. I've gotten a call from the higher-ups who are kind of in control of media outlets in the Army. They ask how my morale is. I guess that's what's important to them.

How is your morale?

Oh, it's OK, I've seen better days. But everything happens for a reason.