Indie roundup: Movies not to miss

The demigods of Canadian metal face twilight in "Anvil!"; a hoax memoir, not quite deconstructed; and a graceful fable from Iran. 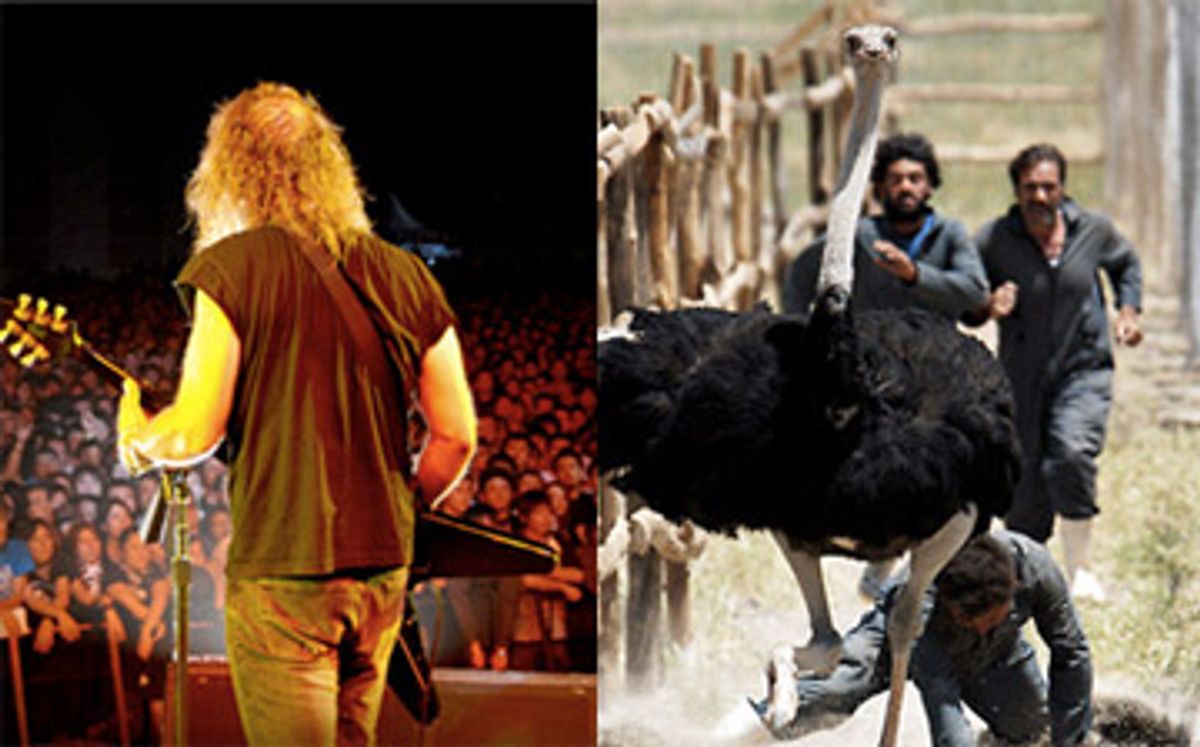 Scenes from "Anvil!" (left) and "The Song of Sparrows"

A few gems, plucked from the onrushing stream of small-scale spring releases. First is a tremendously funny documentary you won't believe is true. Then an outrageous documentary, most of which isn't true. And then a lovely fable from an Iranian master director, true in that, you know, art way. Let's get to it.

Anvil! The Story of Anvil From the too-good-to-be-true desk comes this loving and hilarious portrait of Spinal Tap-esque Canadian metal band Anvil, who were briefly a hard-rock sensation in the early '80s (mainly for the song "Metal on Metal") and have been struggling along in total obscurity ever since. Singer-guitarist Steve "Lips" Kudlow drives a catering truck, while drummer Robb Reiner, his bandmate of 35-plus years, paints Hopper-esque landscapes (including one memorable still life of a toilet bowl) and lives off his wife.

During the course of longtime fan Sacha Gervasi's documentary, the Anvil guys celebrate Kudlow's 50th birthday at a suburban Toronto club, go through a tearful breakup and reunion in an English recording studio, and embark on a disastrous European tour plagued by missed trains and empty clubs that culminates with a "Monsters of Rock" festival in Romania that draws 127 customers. Google away; it's all true, right down to the legendary English producer run to seed (that would be Chris Tsangarides, one-time dial-twister for Black Sabbath and Judas Priest), the incompetent female manager married to a band member, the half-baked life nostrums delivered by aging metalheads and the naive belief that someone is still interested in a mediocre but very loud band that's been left far behind by musical and cultural history.

Kudlow is precisely the kind of character documentarians love. He's a hairy, plug-ugly, likable loudmouth, full of contradictions and not terribly bright, but prodigiously dedicated and able to weather a Job-like torrent of bad fortune. As he observes while driving his truck around Scarborough, Ontario, the fate of Anvil can't become any worse than it is already, so he might as well keep on plugging. Whether you want to view it as a life lesson or not (and whether or not you can stand to listen to this much warmed-over '80s metal), this indomitable will yields improbable results: a new album with Tsangarides, 20-odd years after the last one, and an auditorium of screaming teens in Japan, a nation that seems ever-eager to embrace the cultural castoffs of others. Thanks to the film, Anvil played the Glastonbury festival in England last year, and recently appeared live on VH1.

Gervasi is an accomplished Hollywood scriptwriter (with a feature-directing debut on the way), and he structures the film with such careful attention to audience-pleasing tragicomic rhythms that I kept becoming suspicious, all over again, that "Anvil!" was fiction. It isn't, but it supplies all the rocked-out comedy and "Rocky"-like redemption you could want in a story about a couple of Jewish kids from suburban Toronto who've been playing rock music together since age 14. As Slash of Guns 'n Roses says in one of the interpolated celebrity interviews, how many bands stay together for 30 years? You've got the Stones, the Who, U2 -- and Anvil. Such faith should be rewarded. (Now playing in Toronto. Opens April 10 in New York and Los Angeles; April 17 in Boston, Montreal and Seattle; April 24 in Chicago, Detroit, Philadelphia, St. Louis, San Francisco and Portland, Ore.; May 1 in San Diego, Vancouver and Winnipeg; May 8 in Minneapolis; and May 22 in Atlanta, Baltimore, Nashville and Washington, with more cities to follow.)

"Forbidden Lie$" Speaking of truth and untruth, I couldn't pull myself away from Australian director Anna Broinowski's poorly titled but fascinating quasi-documentary about Norma Khouri, the woman who wrote a widely celebrated and then just as widely discredited 2003 memoir recounting the "honor killing" of her best friend in Jordan. Honor killings of women or girls who "discredit" their families -- by losing their virginity, or simply kissing a boy in public -- do occur in some Islamic countries, and are a particular focus of controversy and activism in Jordan. But Khouri's explosive account of a girl stabbed in the stomach by her own father, who then waited until she was dead before calling authorities (and then received a three-month prison sentence), horrified the post-9/11 West and put her on talk shows all over the English-speaking world.

Now, a few people did notice that Khouri spoke awfully good English for someone who had purportedly had a cloistered girlhood in an Arabic-speaking country -- and distinctively Midwestern American English at that. And then there were the pesky Jordanians, leading feminists like journalist Rana Husseini among them, who protested that virtually nothing in Khouri's account checked out, and that it was rife with ludicrous factual errors. (On the first page of her book, Khouri describes in lyrical prose how the Jordan River no longer has enough water to flow through the center of Amman. As any Jordanian would know, since the 1968 war with Israel the river has formed Jordan's western border, and is nowhere near Amman.) But many people in the West assumed that Arab critics had no standing on this issue.

When a pair of Australian journalists began to uncover the truth about Khouri in 2004 -- first establishing that she had left Jordan at age 3 and been raised in Chicago, then that she was married with two children (she had implied she was unmarried and a virgin) and finally that she had fled the United States for Australia under suspicion of having robbed and defrauded a senile neighbor -- you might think that the story would be over. There was a brief wave of scandal stories, embarrassed publishers all over pulled her book from sale and she dropped out of sight. But for reasons of her own (and after seeing the film you may have some guesses) Khouri cooperates almost fully with Broinowski, leading the director on an elaborate chase across three continents for exculpatory evidence that Khouri claims will prove she was telling the truth, or some version of the truth, the whole time.

So we get multiple appearances by Khouri's suave but sinister Greek-American husband (separated from her under murky circumstances), multiple visits to public-records offices in Amman in an effort to find a dead woman that might fit Khouri's story, and a great deal of tearful pseudo-confession from Khouri herself, an alluring, maddening and perpetually aggrieved attention-whore who seems to have little sense of the distinction between fact and fantasy. Her bedrock position may be that whatever lies she told, she told them to focus the public's attention on honor killings in Arab countries. Even as Broinowski exposes Khouri's shameful and pathological abuse of such genuine tragedies, the filmmaker may be giving her subject exactly what she wants. (Now playing at Cinema Village in New York. Opens April 10 in Los Angeles, with more cities to follow.)

"The Song of Sparrows" With its ostriches, its old-fashioned but essentially lovable male protagonist, its symbolic-spiritual locations and its neorealist aesthetic, this latest film from Iranian director Majid Majidi has the same combination of quiet contemplation, whimsy and tragedy that made his "Children of Heaven" an international smash a decade ago. Given today's weakened art-cinema marketplace (and the weakened international image of Majidi's country), it's unlikely "Song of Sparrows" will have similar success, but it's a leisurely and lovely picture, well worth seeing.

In a performance that won the best-actor award at Berlin, Majidi regular Reza Najie plays Karim, a grizzled ostrich handler in late middle age who is fired from his ranch for losing one of his enormous charges. The escaped bird, lost in the high-desert hills outside Tehran, haunts the borders of the movie from then on. Desperate for money to replace his deaf daughter's broken hearing aid, Karim takes on odd jobs, works as a motorcycle-cab driver, and deals in used objects obtained both ethically and otherwise. Karim moves slowly toward a moral, spiritual and physical crisis, apparently mirrored in his young son's belief that he can become a millionaire by raising fish in an abandoned water cistern.

Majidi is one of the finest picture-makers in the elegant Iranian tradition; in his search for nonverbal epiphanies he neither hurries nor wastes a moment, and his characters and story have a clarity and simplicity that never feels cloying. As a fable about a decent man and a loving family facing the challenges of a fallen world, "The Song of Sparrows" is highly enjoyable. Personally, I prefer Majidi when he challenges himself with riskier material, as in the quasi-metaphysical adultery drama "The Willow Tree," which eschewed sentimental portrayals of working-class life for a more complex portrait of Iran's conflicted middle class. But that was the least successful of Majidi's films, in terms of worldwide film-festival love, and this decidedly won't be. (Now playing at the Lincoln Plaza in New York. Opens April 10 in Los Angeles, April 24 in Denver, May 15 in Philadelphia, May 22 in San Diego, May 29 in Boston and Minneapolis, June 12 in San Francisco and June 19 in Washington, with more cities to follow.)