The triumph of Susan Boyle

Why are we so obsessed with an ordinary, middle-aged, unemployed, unmarried "Britain's Got Talent" contestant? 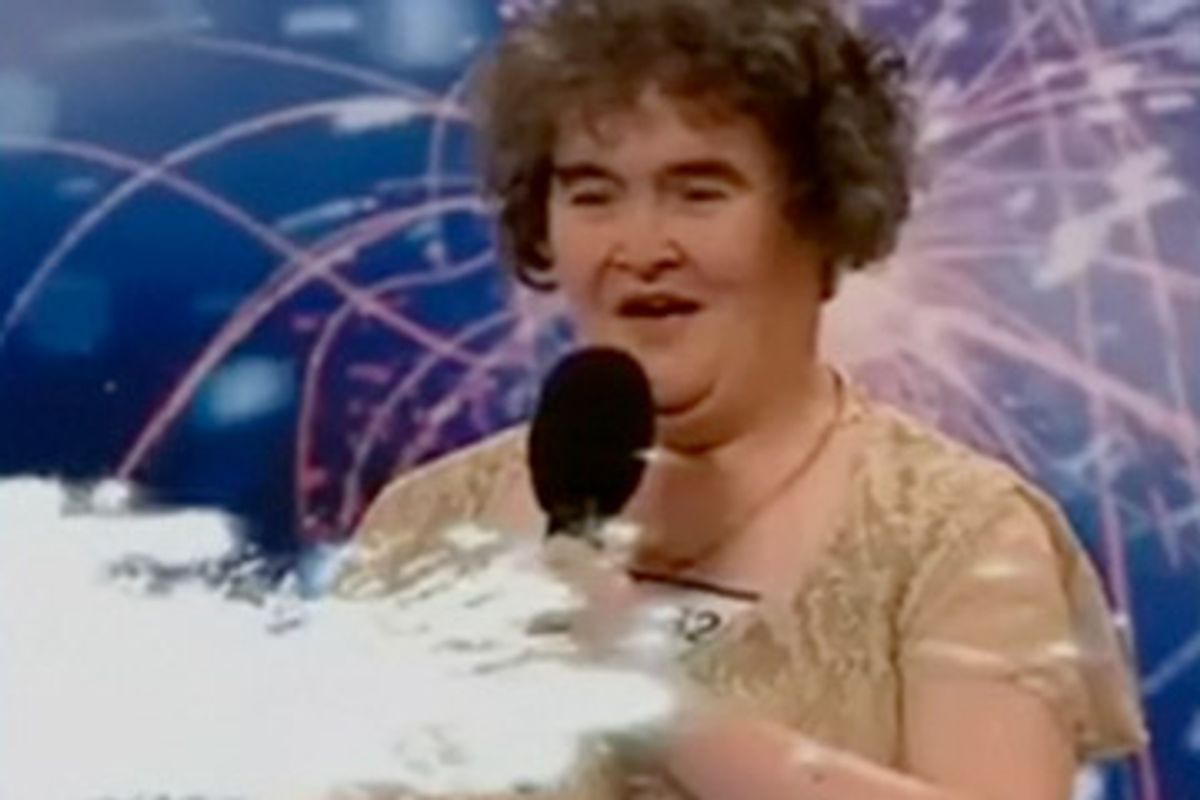 Yes, I'm obsessed with Susan Boyle , too. I've watched the video of her performance (posted in Broadsheet on Monday) at least a dozen times, and I've yet to get through it without welling up.

On Saturday morning, Susan Boyle was an ordinary, middle-aged, unemployed, unmarried, small-town Scotswoman. On Saturday night, in the space of a little over seven minutes, she appeared on the UK television program "Britain's Got Talent," singing her rendition of a song from "Les Miserables."

When Boyle declared in her pre-performance interview that she intended to "make that audience rock," she could not have anticipated how shatteringly she would do just that.

Sunday, the clip was already going viral. By Wednesday she was near the top of both Google and Twitter trends, number one on Digg and Reddit. As of today she has a Wikipedia entry and a variety of fan sites. She has over 57,000 fans on Facebook (of which I am one) and people are clamoring for an album.

The ubiquitous YouTube clip isn't a new phenomenon. One moment a person is playing with a light saber or flubbing a beauty pageant question and the next thing you know, it's been forwarded around the world millions of times over. But there's something particularly compelling about Boyle's performance, something that resonates on a far deeper level than a singing banana ever could.

Part of it, no doubt, is the great reversal of expectation. In the same week that "The Cougar" ignobly made her reality TV debut, Boyle reminds us that not all fortysomething women are sleek, Botoxed beauties. She has wiry, graying hair, bushy eyebrows and a few extra pounds. She is, in short, a human being, first presented to us unaffectedly munching a sandwich. And the audacity of someone like her, someone who is not 25 or beautiful, someone who has never had a professional musical career, who admits to never having even been kissed getting out there and belting one out intrigues us.

It's a convention of the medium, and in particular the mainstream talent show realm, that a woman like Susan Boyle would only be trotted out for us to make sport of. Our deeply engrained law of probability is that one person's lifelong aspiration is another's opportunity for snark, a chance to feel good about ourselves at the expense of someone else's delusion. Watching the judges and the audience roll their eyes as this clearly nervous looking woman says she'd like to have a career like Elaine Paige's, we can't help but await a little William Hung-style horribleness.

So when instead Boyle brings it, with an impassioned, majestic version of "I Dreamed a Dream," a song of regret and loss and missed opportunities, our shock at her triumph is downright wrenching.

What a weight off our shoulders it is to not mock her. What a pleasure it is to see someone do well. How happy we feel, to feel happy for someone else, as the audience leaps to its feet and the judges unanimously praise her. She stands before us all, vulnerable and strong, joyful and clearly moved, and then we stand with her.

Boyle's success doesn't change the world. Television competition remains as contrived a beast as you're likely to find. The duckling-into-swan motif will be familiar to anyone who witnessed the similar metamorphosis of the equally ordinary looking, vocally gifted Paul Potts on "Britain's Got Talent" two years ago, or any makeover show you can name. When Boyle first bursts into song and jaws promptly drop in unison, the show's hosts note with satisfaction, "You didn't expect that, did ya?" They obviously did. Simon Cowell's blissed-out expression during her performance may be the result of the cash register ca-ching ca-chings no doubt ringing in his head. And, because we are a short-attention span universe, the "I'm so sick of Susan Boyle" comments are already racking up.

But the power of that clip cannot be denied. As we watch, we start out in the audience, our cynicism at full attention. Quite frankly, given the glut of appallingly untalented performers blithely flooding the Net, we can be forgiven for the default assumption that everything is terrible.

Yet when Boyle sings, our identification transfers instantly to her. She's us. A regular, imperfect, unairbrushed person, an intimate friend of rejection and loneliness and mockery and disappointment. A person who, in spite of everything, clings resolutely to the conviction that there is something inside her that's very special. A person who says "I Dreamed a Dream" but knows that dreams are very much an enduring, present-tense affair. And who longs with every ounce of that dreaming specialness to be, even for just one moment, heard.