From Washington to San Francisco, tax day "tea parties" bring the right-wing fringe out into the unflattering light of day. 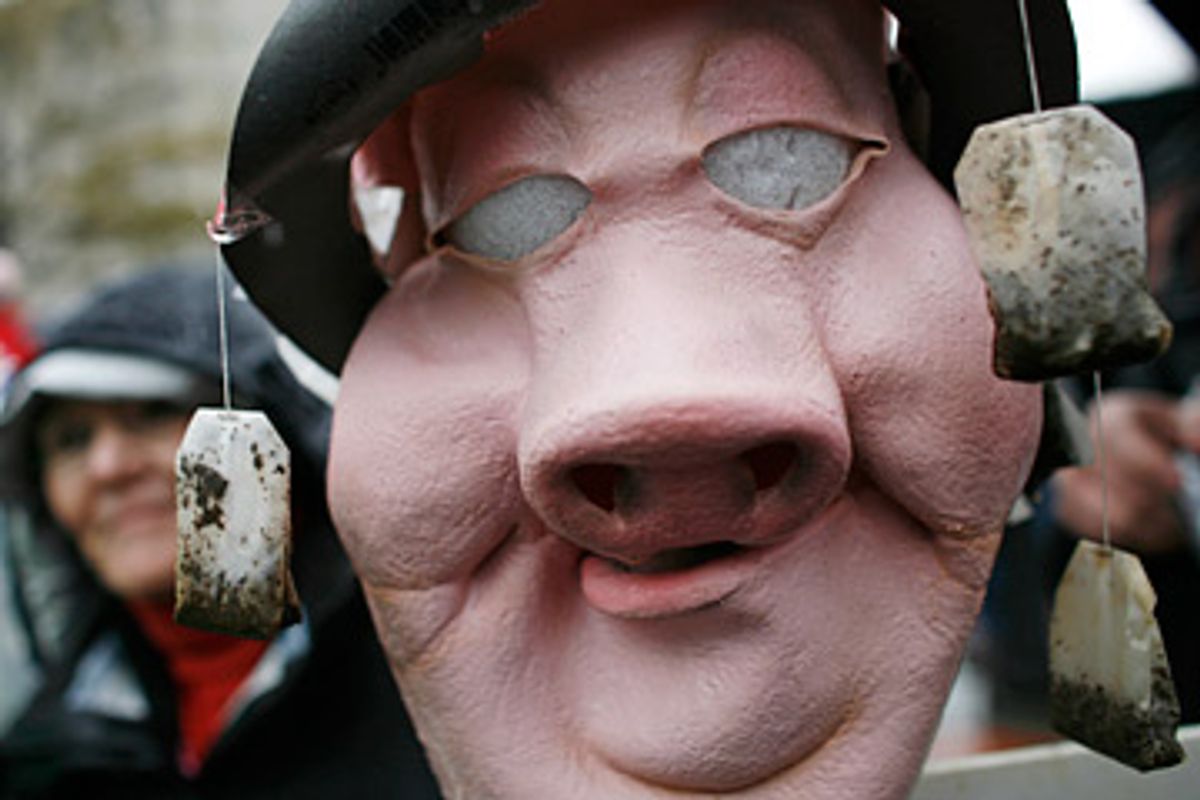 The gathering in Lafayette Square, in honor both of tax day and of a generalized fury at Barack Obama, his budget, the Federal Reserve and whatever else ails the conservative movement, was going just fine, despite the rain. But there's an old saying in protest organizing: It's all fun and games until someone tea-bags the White House.

And so it went Wednesday for the most geographically prominent tea party protest of the hundreds held around the nation. At around 2:30 p.m., a little before the rally was supposed to break up, someone threw a box of tea bags over the fence around the executive mansion, and the Secret Service moved in like, well, like they were cornering a bunch of liberal protesters gathered outside of George W. Bush's White House.

Before you could say, "Who is John Galt?" the party was over. It turns out the Secret Service's devotion to keeping people from throwing things at the president is fairly bipartisan. Unlike the tea parties. Organizers said the day drew people out to more than 700 sites nationwide. Fox News was practically a co-sponsor; the network broadcast live from San Antonio, with Glenn Beck; Sacramento, with Neil Cavuto; and Atlanta, with Sean Hannity. There was no official count of total national attendance, but estimates ranged from 4,000 in Lansing, Mich., to a few hundred in Boston, home of the Revolutionary War-era tea party that inspired the general motif. (The right-wing Web site Pajamas Media put the national figure at 184,064, as of 8:17 p.m. Eastern.) But whatever the size of the crowds, from Washington to San Francisco the rallies were pretty much a right-wing thing. They drew a mixture of the conservative base, Ron Paul zealots, libertarians and assorted others who are dead certain that Obama's administration is taking the country into socialism -- or worse.

To find extreme sentiments in Lafayette Park, it wasn't necessary to look for the people with the most eccentric tea-bag-themed costumes. You could just pick a protester at random. "I think Obama's plan is to create a catastrophic failure in our economic system, because then people will get desperate, and then you have the ability for a totalitarian government to move in," said J'Neane Theus, 54, who retired from the Navy and now manages investments. She drove about an hour from Clarksville, Md., battling Washington's horrific rush hour traffic to be an official marshal of the tea party (she had a white hat with "marshal" hand-scrawled in red ink to prove it). Her son, a 19-year-old Marine named Galen, stood next to her in a red, white and blue tie-dyed shirt, holding a sign accusing Barney Frank and other Democrats of treason. "I think that sounds very wacko; Americans don't want to believe that. But we've seen this movie before," the elder Theus said. I asked her where. "How about, well, fascist Italy, under Mussolini -- and look at what happened to him, I would remind Obama of that," she said. "Hitler. Stalin. Socialism has been proven not to work."

Another seemingly sedate protester, Brian Smith, a marketer from Greenville, S.C., who was in Washington on business and came by the rally, wandered equally off message. "I love my country and I don't like what's going on," Smith said. "Government -- to be honest with you, and this will probably be misquoted, but on 9/11, I think they hit the wrong building. They should have gone into the Capitol building, hit out, knocked out both sides of the aisle, we'd start from scratch, we'd be better off today." I pointed out that "they" did try to hit the Capitol. "Yeah, I know, they missed," he said. "The wrong sequence. If someone had to go, it should have been the Capitol building. On that day I felt differently, but today that's the way I feel."

As hard as Fox News, some big-name conservatives and even the Republican Party tried to make the tea parties out to be a mass movement of mainstream Americans, who -- not even three months into the Obama administration -- had already had enough, the group outside the White House seemed to be coming from the same fringey place. There were somewhere between 500 and 2,000 people in the square throughout the day, which was an impressive turnout considering the weather, but not anywhere near the outpouring of public support that organizers had been promising (or maybe threatening). But almost every sign bore witness that the protester who carried it was well to the right of your average swing voter. "Ameristan -- of the gov'nt, by the gov'nt, for the gov'nt, Barack Hussein Obama," read one placard. "Restore the Republic," pleaded another. "They're nothing but Marxist, socialist Communists in there," shouted a man wearing dark sunglasses, in spite of the rain, as he gestured at the White House. Someone standing alone on the grass, about 30 yards from the stage, had a sign calling Obama "Soetero" -- the name of his Indonesian stepfather -- and telling the president he'd have to get through the guy with the sign if he wanted to destroy the country. But the guy with the sign seemed too busy shouting into his cellphone to stop anyone, much less a president whom nearly two-thirds of the country think is doing a good job.

Though some big corporate lobbyists jumped onto the tea-party movement, the setup in Lafayette Square did, at least, seem to be truly grass roots. The "stage" was a few planks covered by a sad, drooping blue tarp; the mike wasn't loud enough for anyone standing more than about 10 feet away to hear the speakers. With a steady downpour turning the grass underfoot into a thick mud, audio problems and an ecstatic crowd lapping it all up anyway, the whole thing felt like Woodstock for Ayn Rand disciples. (There was even a telltale scent hanging in the air, though at the tea party, it was cigar smoke.) A separate protest was supposed to be held around the corner, featuring establishment conservative types like Alan Keyes, Laura Ingraham and Grover Norquist, but the Secret Service pulled the permit at the last moment, leaving the big names to share the stage with the faithful.

"While he's trying to deal with the very difficult issues of the day, like where the dog will sleep, I hope that President Obama peeks behind, pushes the curtain open at the White House and looks out, because America refuses to be silent into submission," Ingraham said. The speakers hit the standard conservative grievance politics messages: The media is unfair, the poor don't pay taxes, the liberals have taken over U.S. higher education, etc. "At Wellesley College, Hillary's school, you can take a class called 'feminist economics,'" said Patrick Coyle, the vice president of the Young America's Foundation, which aims to take back college for the conservative movement. "God knows what that's all about." The crowed cheered loudly when Ingraham said they were all "right-wing extremists," referring to a Homeland Security report warning of danger from disgruntled conservatives.

But the people at the party had a more diffuse set of issues. Holding an American flag with a plastic rattlesnake wrapped around the pole, a "don't tread on me" flag that also featured a rattlesnake and a box labeled "tea," Ed Walsh, an electrician from Fairfax Station, Va., said he was most worried about the Federal Reserve. "This government is screwing us over royally," Walsh told me. "The interest that we're paying on the debt that we're generating today -- it's going to a private bank, the Federal Reserve. The Federal Reserve is not federal, it's no more federal than Federal Express." That's a vastly oversimplified, mostly inaccurate view of the Fed, which is the central bank for the U.S., but it also has very little to do with the stated purpose for the rally.

The irony of the day, of course, was that most people aren't anywhere near as outraged about their April 15 tax bill as the tea partiers. A Gallup poll released earlier in the week showed 48 percent of respondents think they pay about the right amount in income taxes. Obama aides, who mostly ignored the tea party scene until the tea bags thrown at the White House put the building into lockdown, decided to mark the day by reminding voters that most people have gotten a tax cut because of the economic stimulus bill that passed earlier this year.

"For too long, we've seen taxes used as a wedge to scare people into supporting policies that actually increased the burden on working people instead of helping them live their dreams," Obama said, as the protest raged on outside. "That has to change, and that's the work that we've begun." The president's own 1040 showed he paid $855,323 in federal income tax last year on income of $2,656,902 (mostly from book sales). If the tea business was really the start of a grass-roots tax revolt movement, maybe Obama should have gone out and joined the party.