Are you ready to feel nostalgic about the most notorious ex-heavyweight champ and convicted rapist of the '90s? Hollywood maverick James Toback sure hopes so. 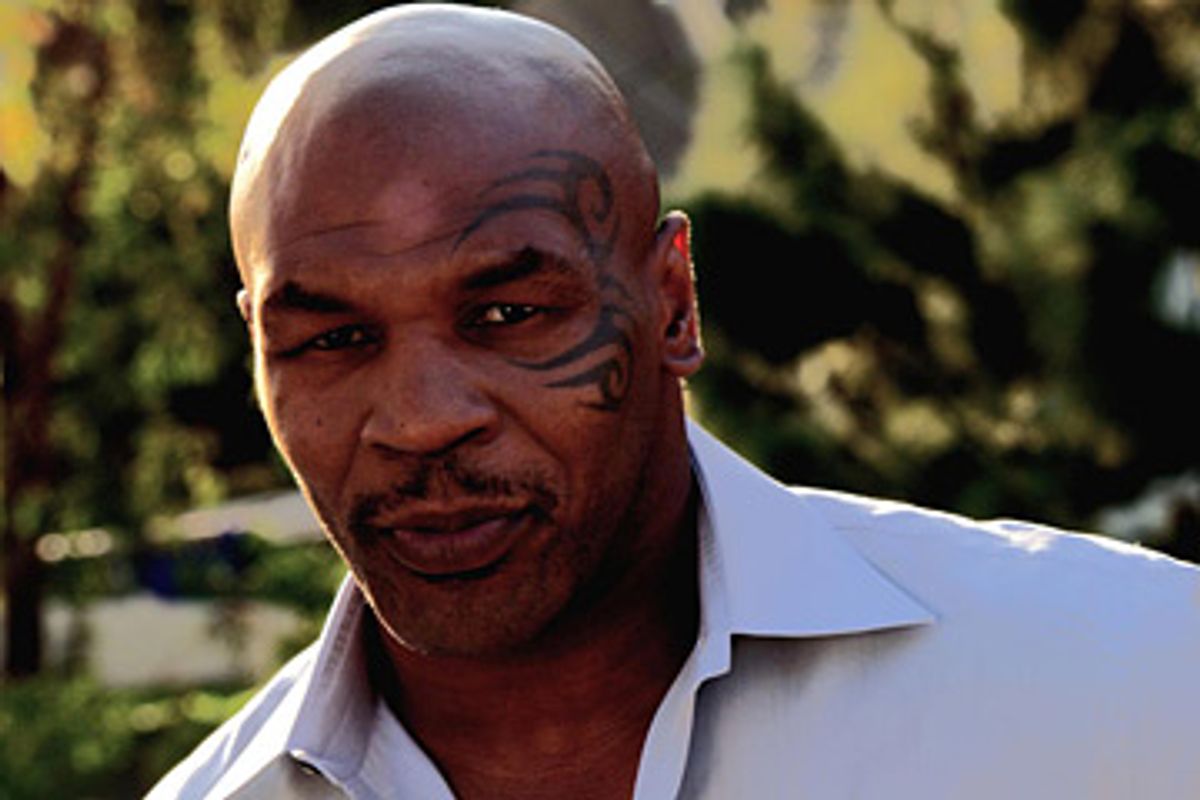 You see this kind of stuff a lot at film festivals; the subject or star or director of a film comes out onstage after the screening and gets a standing ovation, based more than anything else on the strange connection between what we just saw on the screen and what we are accustomed to calling real life. So the scene in the Théâtre Debussy at Cannes last spring was not inherently surprising. A middle-aged man in a nice suit, on the verge of tears, telling us: "This is way above my level. I'm a little intimidated. I've never experienced anything like this in my entire life. Thank you all so much for coming."

OK, but this guy was not some minimalist director from a former Soviet republic, or the subject of a wrenching documentary about an impoverished East African village. The speaker was former heavyweight champion and convicted rapist Mike Tyson, who got something close to a hero's welcome at Cannes for the premiere of "Tyson," the documentary about his life made by American movie maverick James Toback. After percolating slowly through the film-festival economy since its Cannes premiere -- it was also at Sundance in January -- this strange and almost minimalist film finally gets its theatrical release this week.

On one level the lovefest between Tyson and the audience at Cannes seemed bizarre. This is a guy, as Toback's film makes clear, who built his athletic career out of galvanizing powerful reactions from opposing boxers and the public. He's no stranger to public adulation, or for that matter public hatred. But when I talked about it later with other people who had seen the film, it dawned on us that Tyson has never before faced a crowd that was cheering for him as a person, rather than because they wanted to see him pound some poor sucker's internal organs into pulp.

Now, you may well be wondering whether Mike Tyson should be greeted as a hero, whether in Cannes or in Cleveland, and exactly how Toback's film approaches this issue. Well, there's no question that Toback -- himself a controversial figure, if not quite on the same scale -- is trying to imbue this widely demonized man with a certain pathos. Tyson has survived huge success and a dramatic fall, has inflicted enormous suffering on others and on himself. Formerly a boxer of terrifying ferocity and an inordinately wealthy man, he is now neither of those things, without quite being an ordinary middle-aged retired athlete either.

On one level, "Tyson" offers a fairly standard quickie biopic, beginning with young Mike Tyson's childhood in the crime-ridden Brownsville neighborhood of Brooklyn, N.Y. , where, believe it or not, he learned to fight because he was getting beaten up every day. His rise as a boxer, under the tutelage of veteran trainer Cus D'Amato (who became his de facto father), was meteoric; he won his first 19 bouts by knockout and became the undefeated and undisputed heavyweight champion in 1987, at age 21. Many boxing observers thought Tyson's reign might last a decade or longer and redeem the sport from its chaos and disrepute.

Of course, exactly the opposite happened. It seems clear from Tyson's own account in Toback's film that the death of D'Amato, his surrogate father, was the beginning of his downward spiral. Be that as it may, he was knocked out by underdog Buster Douglas in 1990, spent 1992 to 1995 in prison for the hotel-room rape of beauty queen Desiree Washington, and lost whatever was left of his athletic reputation by biting part of Evander Holyfield's ear off during their notorious second fight in 1997. He fought on, with less and less success, until finally quitting in 2005, virtually broke after earning and losing an estimated $300 million.

In remarks to the press at Cannes, Toback said that he wanted to capture Tyson as a "complicated and in many ways noble human being." One can dispute those adjectives. But "Tyson" does succeed in humanizing a deeply troubled individual who has been depicted as an almost animalistic stereotype of African-American manhood. The Mike Tyson we see in these interviews is a tortured and vulnerable person who discusses his failings frankly and has clearly struggled to make sense of himself and the world, reading both Mao Zedong and the Holy Quran while in prison. (It's an idiosyncratic combination, you've got to give the guy that.)

Still, Tyson has little insight into his repeated problems with women, and continues to insist, all these years later, that he was completely innocent of any wrongdoing in the Desiree Washington case. Given Toback's reported history of difficulty with women (on a much lower level), it's tempting to say he's seized on Mike Tyson as a fellow aging warrior, or über-macho mirror image. Once a rising Hollywood upstart for such films as "Fingers" in 1978 and "The Pick-up Artist" in 1987, Toback now finds himself on the fringes of the business, going from festival to festival with a half-appealing, half-pathetic documentary about a washed-up boxer nobody likes. It might actually work; if there's a moment for Tyson nostalgia, this is it. If not, hey, they'll always have Cannes.

"Tyson" is now playing in New York and Los Angeles, with wider national release to follow.