The immediate challenge in the banking crisis is to sort out public from private responsibilities and to create clearer lines of accountability. 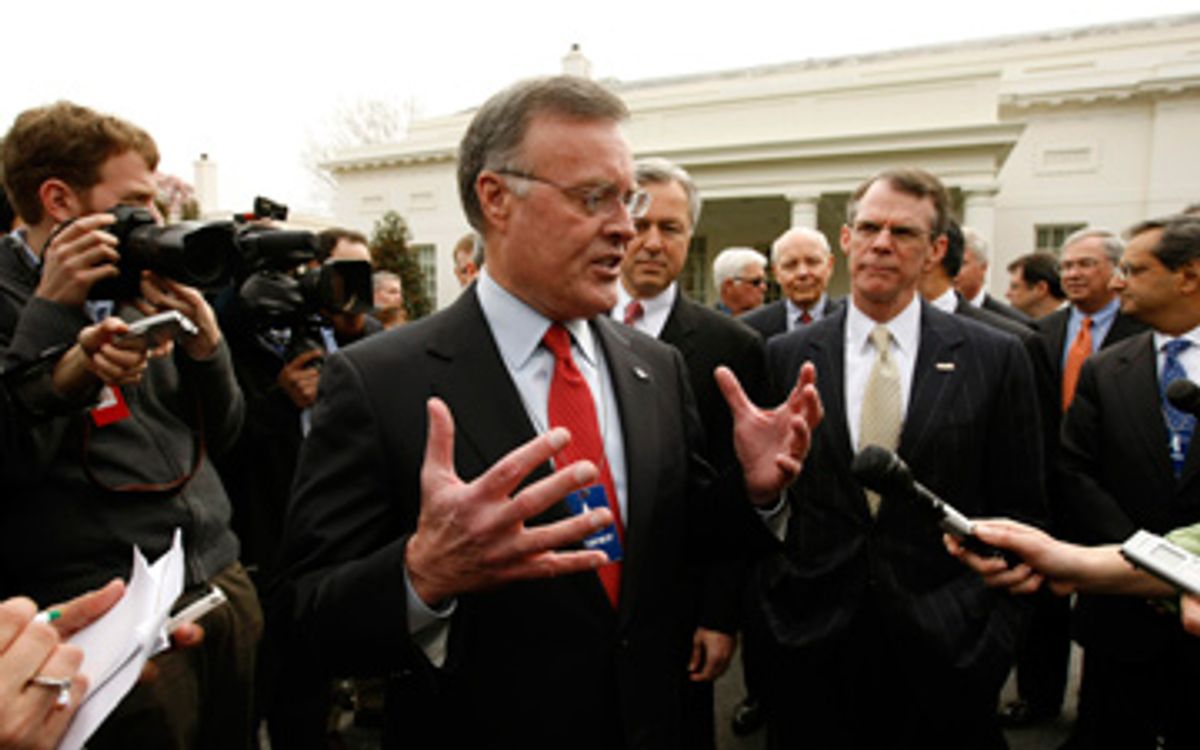 I don't know whether Bank of America shareholders will oust Ken Lewis from his chairmanship this week. I don't know if Treasury Secretary Timothy Geithner will eventually do it, either. What really worries me is I don't know who would actually be responsible for doing the deed, or by what criteria.

When it comes to keeping top corporate executives in line we usually entrust the job to shareholders -- or, as a practical matter, boards of directors that are supposed to represent shareholders' interests. When it comes to keeping top public servants in line we generally trust voters -- or, as a practical matter, the elected officials who represent them. But when, as now, the public has committed large amounts of its money to particular companies in the private sector, we're in a quandary.

The $45 billion we've sent to the Bank of America should give the public some say over whether Mr. Lewis remains in his job because he is now accountable to us as well as to his shareholders. But to which group should he be more accountable?

And: Is Mr. Lewis's main job still to make money for his shareholders, or does he now have a higher public responsibility to lend more money to Main Street? Was that public responsibility also paramount last fall when Federal Reserve Chief Ben Bernanke and Treasury Secretary Hank Paulson told Mr. Lewis to proceed with the Merrill-Lynch merger -- and when, according to Mr. Lewis's sworn testimony, he believed they didn't want him to disclose Merrill-Lynch's financial losses to B of A shareholders or anyone else?

It's not even clear who represents us as members of the public. Next month, AIG holds its annual shareholders meeting. Are you attending?

Maybe you should. The $170 billion we've committed to AIG so far amounts to nearly 80 percent of its shares. Some private shareholders are pushing for a vote to oust an AIG board member and to further restrict executive pay. But these dissident shareholders represent only a slice of the 20 percent of AIG's private owners.

AIG has three public trustees, each of whom is being paid $100,000 a year. Should they vote with the dissidents? There's no way to know, because the public trustees have no charter or mission statement to guide them, and they don't seem to report to anyone, either.

The question of public representation keeps growing. Now that our loans to Citigroup have been turned into common stock, you and I and other members of the public are poised to become Citigroup's biggest shareholder, holding about 36 percent of its voting shares. But who represents us, and how should they vote?

The Obama administration apparently wants to do more of these debt-for-equity swaps. They're a means to get more capital to the banks without returning to Congress to ask for more money -- which Congress would be very reluctant to provide. But the swaps also expose the public to more risk. At least loans have to be repaid.

Share prices, as we've seen, sometimes go down. Yet without a means for representing the public's interest in the governance system of these banks, we can only rely on the Treasury secretary to keep a watchful eye over the ongoing decisions of every bank. That's unrealistic.

Even if our public interests were being represented, it's not clear exactly what they are beyond getting repaid or possibly making a bit of a profit. Presumably taxpayer dollars are being committed because of some larger public purpose. Yet companies are designed to make profits, not to fulfill public responsibilities.

Suppose the government, representing the public, instructs the Wall Street banks it now controls to lend more money to Main Street. But top bank executives believe they can better raise share prices by using the money for new investments, bigger dividends, or to lure and retain "talent." The executives have a duty to do what the government tells them to do, but they have an even larger fiduciary responsibility to their shareholders to raise share prices.

Suppose the government instructs AIG to clean up its balance sheet, but AIG's executives think they can make more money by inventing new off-balance-sheet derivatives. The executives' primary job is to make money for their shareholders. The fact that the public now owns 80 percent of AIG doesn't change that.

Suppose we tell General Motors Corporation -- about to become partly ours -- to shift its fleet to more fuel-efficient cars. Yet its executives know that as long as gas prices are low, Americans remain infatuated with highly profitable SUVs and pickup trucks. GM executives would have a perfect right, if not a duty, to disregard what we as citizens tell them to do in favor of what shareholders want them to do.

Democratic capitalism entails two systems by which people with significant power are held accountable. One is capitalism, by which companies and their executives are accountable to the market. The other is democracy, by which public agencies and their leaders are accountable to voters. Americans may disagree about how much we want of one or the other, but most people understand we need both systems of accountability. When we confuse the two, we run into the danger that people with great power may escape accountability altogether.

That's the problem right now. Bank of America's Ken Lewis is fully accountable to no one. AIG's public trustees have no charter or public mission to guide them. GM is trying to satisfy the Treasury and its shareholders simultaneously, and is doing neither very well. Even as the public takes larger ownership stakes in big Wall Street banks, the public has no systematic means of expressing its growing interest, whatever it is.

Perhaps government had no business meddling in the private sector to begin with. AIG, the big banks and the auto companies should have been forced to work out their problems with their creditors, or else be put into temporary receivership until their profitable units or nonperforming loans could be sold off. Perhaps any company that's judged too big to fail is too big, period. Antitrust laws should have been used to break these giants up before they got so big.

These arguments may be relevant to the recent past and possibly to the future, but they're beside the point right now. The immediate challenge is to sort out public from private responsibilities and to create clearer lines of accountability.

At the least, when government takes an ownership stake in a company, the public should be represented on that companies' board of directors in direct proportion to the size of its stake. Those public directors should be appointed by the president. In exercising their oversight function, they should seek guidance from the president and his top economic officials. And their votes on critical issues before the board -- such as whether to fire Ken Lewis -- should be made public.