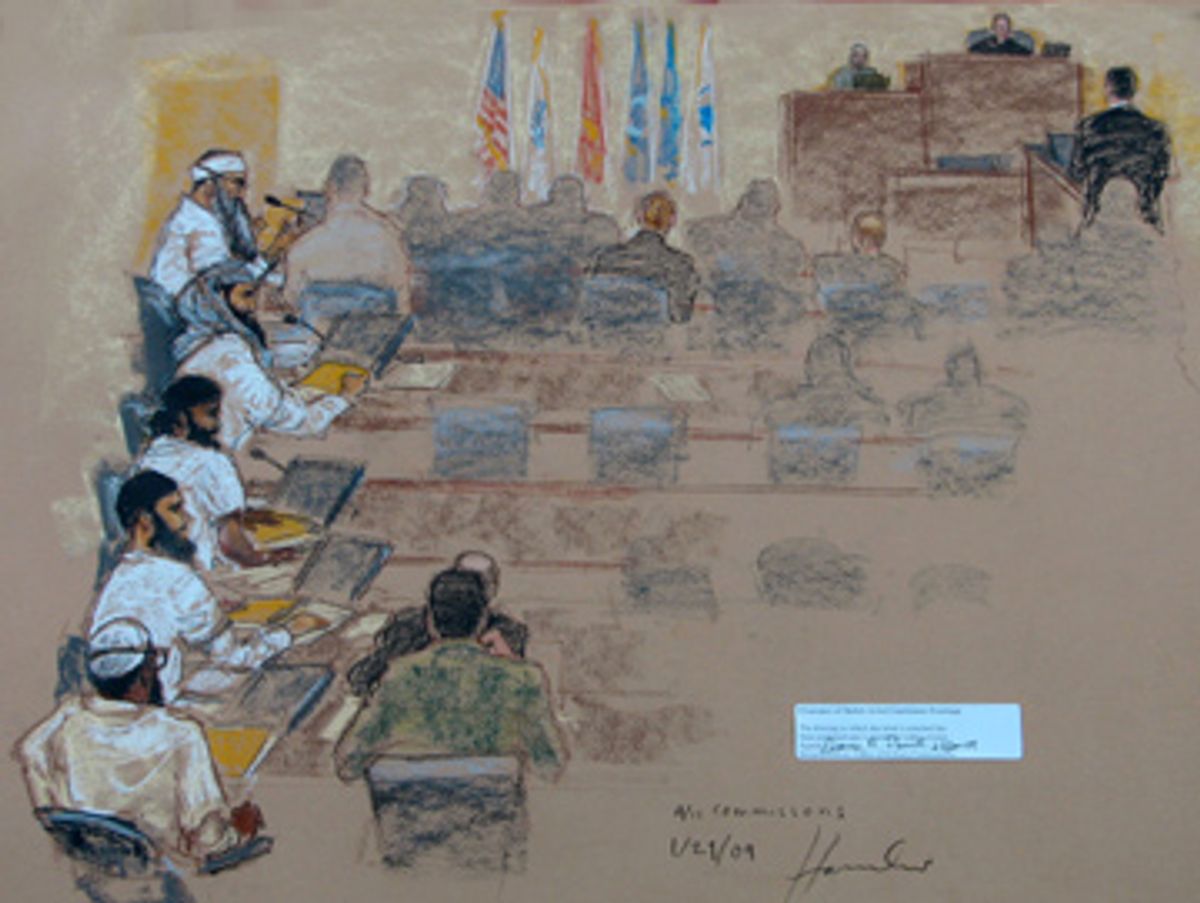 I watched the inauguration of President Obama from Guantánamo. Military and civilian defense lawyers had been in pretrial hearings in the 9/11 death penalty cases only the day before, and were scheduled to return to a military commissions court the day after the inauguration. But late that evening came word that the new president had ordered a halt to the military commissions while his administration determined whether the cases should be prosecuted in federal civilian courts. Since their adoption by the Bush administration, military commissions had been understood around the world as a sham -- a false front designed to look like a criminal justice system but rigged to guarantee convictions and death sentences. Now, there was hope that the national shame of torture, illegal detention, and secrecy was about to end. Guantánamo would close; the rule of law would be restored. It would not be easy, but there were many inside and outside government ready to help.

There were also quite a few, apparently, left to defend the Star Chamber proceedings that were halted that day. On May 2, 2009, the New York Times reported that the Obama Justice Department may attempt to retrofit the military commission to try some of the Guantánamo detainees. This story comes only 20 days before the expiration of the 120-day period the president gave his Justice Department to determine how the detainees should be tried. "'The more they look at it," said one official, "the more commissions don’t look as bad as they did on Jan. 20." Particularly disturbing: The most appealing aspect of the military commissions is reported to be the degree to which they create "shortcuts" that make it easier to obtain convictions than it would be in real courts. Such shortcuts include permitting the use of confessions that were extracted by brutalizing the detainees, and allowing prosecutors to rely on hearsay statements from unnamed sources whom the defendant will have no chance to cross-examine.

In short, any purportedly retooled military commissions will be the same discredited proceedings that I observed before President Obama issued his promising orders to halt the injustice. What I saw was a shameful travesty of a court, a made-up court, a court that compared unfavorably with the backwoods justice in Deep South capital cases I’ve been in for 20 years now. I didn’t see anything that was capable of restoring America.

The inherent shortcomings of the military commissions are not justified, as some disingenuously assert, by the need to protect sensitive intelligence sources, such as operatives or friendlies who cannot be cross-examined because their identities must remain protected. Existing federal laws provide all the protection that lawful intelligence-gathering requires. The federal trials of the Blind Sheikh, the 1993 World Trade Center bombing, the 1998 East African Embassy bombings and the capital trial of Zacharias Moussaoui demonstrate that. Indeed, two former prosecutors studied every single terrorism-related trial ever conducted in the U.S. and concluded that the federal courts are eminently capable of handling these cases.

As part of their function in greasing the skids toward easier convictions, however, the military commissions were set up to achieve two other objectives that were prized by Bush administration operatives: 1) use the evidence obtained by torture, and 2) protect the identity of the torturers. That's why the observers from international and national human rights organizations called them the Torture Tribunals. And that’s why the military commissions, no matter how meretriciously enhanced, can never serve as an acceptable alternative to a true court of law. The defendants seated in its courtrooms have been passed on a shadowy conveyor belt that runs from the interrogation chambers of Guantánamo back through the CIA’s black sites and dark prisons. The gears and levers of the commissions are worked by the same hands that authorized interrogators to strike detainees, slam their heads against walls, administer the waterboard, and meticulously record elevated blood pressures and heart rates. Fair-minded Americans and the international community will reject the credibility of judgments rendered by commissions that are staffed by Department of Defense judges and CIA working as court attachés.

These proceedings, in principle and in practice, are completely inconsistent with the fundamental principles of American justice and with U.S. treaty obligations. They are subject to political influence, and rely on confessions or witness statements extracted by torture and on secret evidence that a defendant cannot see or rebut. To date, the experience litigating the 9/11 cases in the commissions have demonstrated them to be unsalvageable. And these are capital cases -- supposedly deserving of the highest standard of judicial care. Yet the distinguishing hallmark of the commissions' approach has been the appalling refusal to afford the accused the essential tools recognized by both the United States Supreme Court and the American Bar Association as necessary to the preparation of a capital cases defense. Some examples:

Still, even if the Obama administration tweaked the system to make the defense look more like one that is afforded in a real court, the commissions remain, by definition, the creature of the military, susceptible to influence by an institutional legacy and objectives that may be at odds with a fair trial. Gen. Thomas Hartmann, the supposedly neutral legal advisor to the Convening Authority, famously remarked that in the military commissions there must be no acquittals. He dismissed a chief prosecutor whose sin was that he felt that the proceedings should be fundamentally fair. Three military commission prosecutions eventually had to be recommenced after Hartmann was found to have illegally pressured the prosecutors. Eventually, six line prosecutors resigned, five explicitly citing violations of their professional ethics if they continued to serve as prosecutors in the military commissions. Thus far, more prosecutors resigned than ever examined a witness in the bogus commission courts.

The chaotic and discredited functioning of the military commissions is not surprising -- and was even predictable. Which may be one reason then-Sen. Barack Obama voted against the Military Commissions Act (MCA), and presidential candidate Obama vowed to reject the MCA if elected. It is not easy to invent a criminal justice system -- the one that operates in federal courts across the land is the product of more than 200 years of refinement by all three branches of our American government. Thousands of Supreme Court opinions have polished many of the rough edges off the process. It is not perfect, and probably never will be -- but it is the envy of much of the world.

The military commissions system is 5 years old. The law itself is fraught with internal inconsistencies, besides being blatantly weighted in favor of the prosecution. It has been the subject of three Supreme Court opinions, all of them reversals. This is an inauspicious track record for any would-be "fixers," attempting to substitute the military commissions for the rule of law. Despite the string of judicial defeats, the MCA still contains a number of provisions that have never been tested. The upshot of this uncertainty is that there will be no confidence in the decisions of a commission court until a lengthy appeal process is complete. Even then, the perceived legitimacy of rulings that excuse the deficiencies in a disparate judicial system and affirm convictions -- and possibly sentences of death -- will be compromised by lingering questions whether such decisions are the product of justice or expediency.

The president should not attempt to "fix" the unfixable military commissions. This president was elected in part because he promised to close Guantánamo and end the commissions, to restore the rule of law. Americans everywhere were weary of the sickening news of torture, rendition and the debasement of the American military and intelligence communities in the name of fighting terror. The cheer that went up at the CIA when Obama visited had nothing to do with the decision not to prosecute some of the mid-level intelligence ops who tortured. It had everything to do with honorable men and women who want to serve the country they love in the intelligence field, who had been robbed of their idealism and want it restored.

During the election Sen. John McCain repudiated mistreatment of alleged terrorists, no matter what they had done, saying: "It’s not about them. It’s about us."

We all want America restored. Ending the military commissions, the Torture Tribunals, is a necessary step in that process.

Denny LeBoeuf is the director of the ACLU’s John Adams Project, providing civilian attorneys and resource assistance in the Guantánamo capital prosecutions.