Abridgments of press freedom by Iran receive endless attention from the American press while far more severe abridgments by the U.S. are ignored. 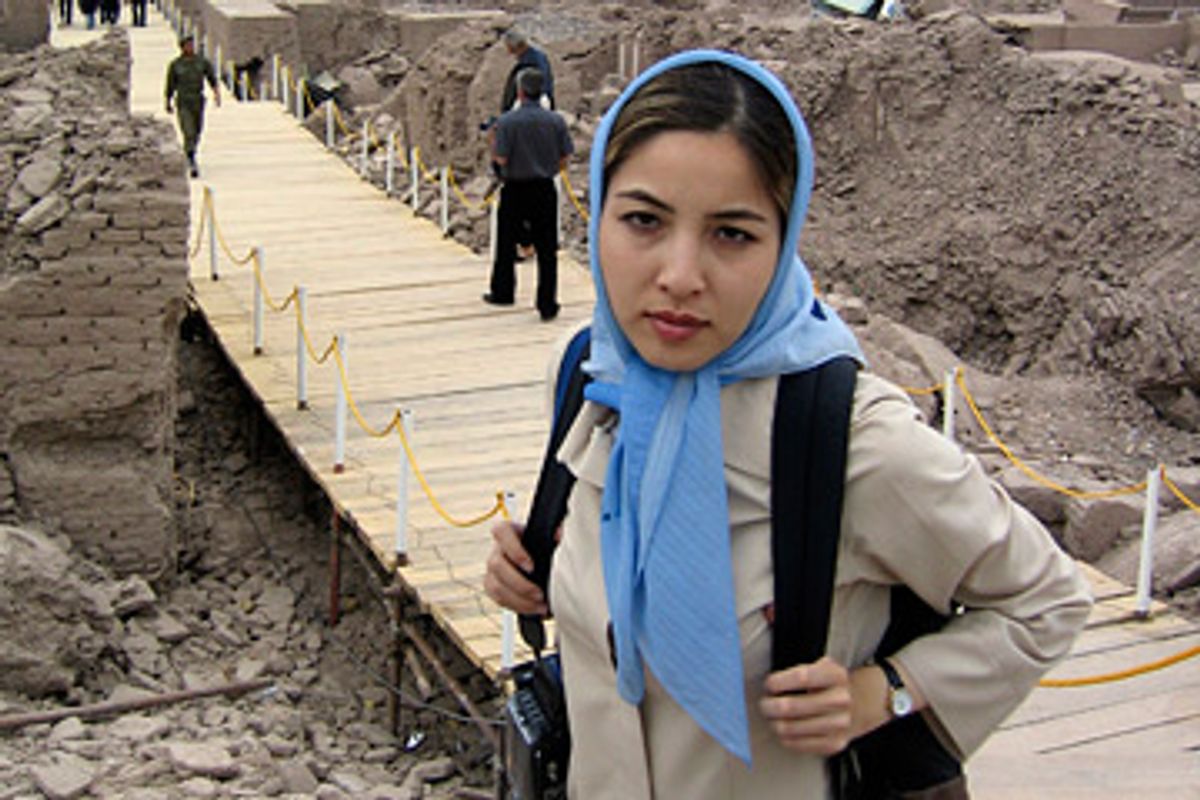 An Iranian appeals court this morning announced that it was reducing the sentence and ordering the immediate release of Iranian-American journalist Roxana Saberi, who was convicted by an Iranian court last month of spying for the U.S. and sentenced to eight years in prison.  Saberi's imprisonment in January became a cause célèbre among American journalists, who -- along with the U.S. Government -- rallied to demand her release.  Within minutes of the announcement, several of them -- including ABC News' Jake Tapper, Time's Karen Tumulty, The Atlantic's Marc Ambinder -- posted celebratory notices of Saberi's release.

Saberi's release is good news, as her conviction occurred as part of extremely dubious charges and unreliable judicial procedures in Iran.  And, as Ambinder suggested, her release most likely is a positive by-product of the commendable (though far from perfect) change in tone towards Iran specifically and the Muslim world generally from the Obama administration.  But imprisoning journalists -- without charges or trials of any kind -- was and continues to be a staple of America's "war on terror," and that has provoked virtually no objections from America's journalists who, notably, instead seized on Saberi's plight in Iran to demonstrate their claimed commitment to defending persecuted journalists.

Beginning in 2001, the U.S. held Al Jazeera cameraman Sami al-Haj for six years in Guantanamo with no trial of any kind, and spent most of that time interrogating him not about Terrorism, but about Al Jazeera.  For virtually the entire time, the due-process-less, six-year-long imprisonment of this journalist by the U.S. produced almost no coverage -- let alone any outcry -- from America's establishment media, other than some columns by Nicholas Kristof (though, for years, al-Haj's imprisonment was a major media story in the Muslim world).  As Kristof noted when al-Haj was finally released in 2007:  "there was never any real evidence that Sami was anything but a journalist"; "the interrogators quickly gave up on asking him substantive questions" and "instead, they asked him to spy on Al-Jazeera if he was released;" and "American officials, by imprisoning an Al-Jazeera journalist without charges or meaningful evidence, have done far more to damage American interests in the Muslim world than anything Sami could ever have done."

In Iraq, we imprisoned Associated Press photographer Bilal Hussein -- part of AP's Pulitzer Prize-winning war coverage -- for almost two years with no charges of any kind, after Hussein's photographs from the Anbar province directly contradicted Bush administration claims about the state of affairs there.  And that behavior was far from aberrational for the U.S., as the Committee to Protect Journalists -- which led the effort to free Saberi -- documented:

Hussein’s detention is not an isolated incident. Over the last three years, dozens of journalists—mostly Iraqis—have been detained by U.S. troops, according to CPJ research. While most have been released after short periods, in at least eight cases documented by CPJ Iraqi journalists have been held by U.S. forces for weeks or months without charge or conviction. In one highly publicized case, Abdul Ameer Younis Hussein, a freelance cameraman working for CBS, was detained after being wounded by U.S. military fire as he filmed clashes in Mosul in northern Iraq on April 5, 2005. U.S. military officials claimed footage in his camera led them to suspect Hussein had prior knowledge of attacks on coalition forces. In April 2006, a year after his arrest, Hussein was freed after an Iraqi criminal court, citing a lack of evidence, acquitted him of collaborating with insurgents.

Right now -- as the American press corps celebrates itself for demanding Saberi's release in Iran -- the U.S. continues to imprison Ibrahim Jassam, a freelance photographer for Reuters, even though an Iraqi court last December -- more than five months ago -- found that there was no evidence to justify his detention and ordered him released.  The U.S. -- over the objections of the CPJ, Reporters Without Borders and Reuters -- refused to recognize the validity of that Iraqi court order and announced it would continue to keep him imprisoned.

One finds only a tiny fraction of news coverage in the U.S. regarding the treatment of al-Haj, Hussein, Jassam and these other imprisoned journalists as has been devoted to Saberi.  It ought to be exactly the reverse:  the American media should be far more interested in, and opposed to, infringements of press freedoms by the U.S. Government than by governments of other countries.  Yet the former merits hardly a peep, while the latter provokes all sorts of smug and self-righteous protests from American journalists who suddenly discover their brave commitment to press freedoms when all that requires is pointing to a demonized, hated foreign government and complaining.

Many people scoff at the notion that the American media propagandizes the American citizenry, but here one sees the vivid essence of that process.   Our establishment media loves to point to and loudly condemn the behavior of other governments as proof of how tyrannical and evil they are -- look at those Iranian mullah-fanatics imprisoning journalists/look at those primitive, corrupt, lawless Iraqis and their "culture of impunity"/look at the UAE and their tolerance of torture -- while completely ignoring, when they aren't justifying, identical behavior by our own government.

In Iran, at least Saberi received the pretense of an actual trial and appeal (one that resulted in her rather rapid release, a mere three weeks after she was convicted), as compared to the journalists put in cages for years by the U.S. Government with no charges of any kind, or as compared to the individuals whom we continue to abduct, transport to Bagram, and insist on the right to imprison indefinitely with no charges of any kind.  Who was treated better and more consistently with ostensible Western precepts of justice and press freedoms:  Roxana Saberi or Sami al-Haj?  Saberi or Bilal Hussein?  Saberi or Ibrahim Jassam?  Saberi or the Bagram detainees shipped to Afghanistan and held in a dank prison, away from the sight of the entire world, without even a pretense of judicial review, a power the Obama administration continues to insist it possesses?

Pointing to other governments and highlighting their oppressive behavior can be cathartic, fun and gratifying in a self-justifying sort of way.  Ask Fred Hiatt; it's virtually all he ever does.  But the first duty of the American media -- like the first duty of American citizens -- is to oppose oppressive behavior by our own government.  That's not as fun or as easy, but it is far more important.  Moreover, obsessively complaining about the rights-abridging behavior of other countries while ignoring the same behavior from our own government is worse than a mere failure of duty.  It is propagandistic and deceitful, as it paints a misleading picture that it is other governments -- but not our own -- which engage in such conduct.

UPDATE:  A Nexis search for "Roxana Saberi" reveals 2,201 mentions in press reports, virtually all of them in the last two months regarding her arrest by Iran.  By stark contrast, a search for "Ibrahim Jassam" -- the Iraqi journalist still held without charges by the U.S. even in the face of an Iraqi court finding that there's no evidence of his guilt -- produces a grand total of 71 mentions.  A search of "Sami al-Haj" for the first five years of his detention in Guantanamo (2001-2006) reveals a grand total of 101 mentions.  For the entire period of his lawless detention, Bilal Hussein's name was mentioned 556 times.  See those Nexis searches here.

One of the rare mentions of Jassam was an Associated Press International report that ran in the February 11, 2009, issue of The New Zealand Herald.  It reported:

A media watchdog group [the Committee to Protect Journalists] said it has urged President Barack Obama to end the US military's practice of detaining journalists without charges and asked for a full investigation into killings of journalists by US military forces. . . .

Officials with the New York-based group took the United States to task, saying the detention of journalists without trial by US authorities in such countries as Iraq has reduced America's standing in the world and emboldened other countries to do the same. . . .

[Wall St. Journal editor Paul Steiger] noted in [the letter to Obama] that 14 journalists have been held without due process for long periods in Iraq, Afghanistan and at the Guantanamo Bay Naval Base.

Sixteen journalists have been killed by US fire in Iraq, he said.

"We don't believe that these are deliberate attacks, but they have not been adequately investigated," Simon said.

Journalists detained by US forces in Iraq include Associated Press photographer Bilal Hussein, who was held without charges for two years before being released in April 2008.

A freelance photographer working for Reuters, Ibrahim Jassam, is the only journalist who remains jailed. He was detained by US forces in Baghdad on Sept. 2, Steiger said in his letter to Obama dated Jan. 12. 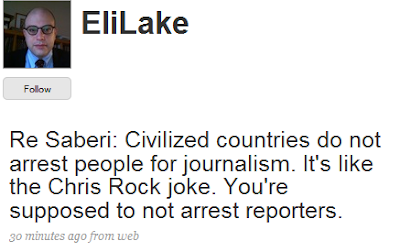 It simply would not be possible for his brain to process the fact that what he's describing as the hallmark of an uncivilized country is that which the U.S. does repeatedly and in far more oppressive ways than what Iran did in the Saberi case. In that regard, he is a typical American journalist.

Identically, a commentator on Twitter asked TNR's Lake how he reconciled his condemnation of Iran -- "civilized countries do not arrest people for journalism" -- with the examples I've highlighted here, and this was Lake's response:

Given that they were never given any trials, how could Lake possibly know that the multiple reporters we imprisoned (and, in Jassam's case, continue to imprison) were "using their press cards as cover for terror"?  He, of course, has no idea.  Indeed, in Jassam's case, an Iraqi court ruled there was no evidence to justify his detention; in Hussein's case, the first (and only) court to review his imprisonment ordered him released; and, as Kristof said about al-Haj:  "there was never any real evidence that Sami was anything but a journalist."  All Lake knows about them is that they're Muslim and that the U.S. Government claimed (with no evidence and no charges) that they were involved in "terror," and that's good enough for him to cheer on their indefinite imprisonment without charges.  Amazingly, this is the person purporting to lecture Iran today about what "civilized countries" do and don't do when it comes to imprisoning journalists.

Lake goes on to suggest that even if the journalists we imprisoned weren't guilty, it's still different when we do it, because we're the U.S. and they're Iran.  And there is a perfect distillation of moral relativism:  the rightness of an act is determined not by the act itself, but by who is doing it ("when I do X, it's good; when you do it, it's evil").  It also perfectly illustrates what is, as I noted on Friday, "the single most predominant fact shaping our political and media discourse: everything is different, and better, when we do it."  Why do they hate us?  For our freedoms.