A representative of a leading Democratic group falsely claims that "nobody is interested" in torture.

Last Friday, CNN hosted a panel debate on torture and investigations with two conservatives and two liberals (Daily Kos' David Waldman and Center for American Progress' Erica Williams).  Waldman did a genuinely masterful job of arguing the case against torture and for investigations -- you can watch the five-minute segment here -- but, bizarrely, the representative for CAP joined in with the two conservatives against Waldman to insist that there be no investigations.  This is what she said:

I wonder how Williams reconciles her claims about what "the American people" are and are not interested in with this: 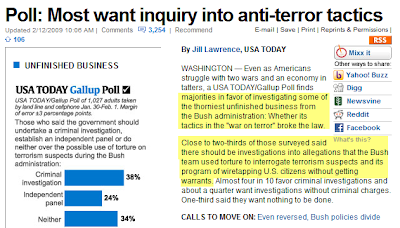 That poll was from February, and while some subsequent polls have produced different results, all polls -- even the most recent ones with the most anti-investigation findings -- find that, at minimum, roughly 40% of Americans believe there must be some form of investigations in Bush crimes.  That's a lot of people to be dismissing away as "nobody."  And Democrats in particular -- the group ostensibly represented by CAP and which chose Barack Obama as their nominee -- overwhelmingly favor either criminal prosecutions or investigations.  Williams' claim that "nobody is concerned anymore with what the Bush administration was doing and did" is patently false and, more to the point, is a fringe position among Democrats and progressives.  Is that really the position CAP wants to be articulating on CNN?

What makes her claims even more strange is that it contradicts what CAP itself seems to be doing.  Here is an article that the main website for American Progress, the entity Williams represents, is currently promoting: 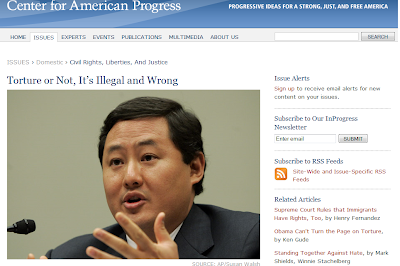 That's an odd article to be running given that, according to Williams, it's a topic about which "nobody is concerned."  And CAP's blog, ThinkProgress, has some of the best and most comprehensive coverage around of the debates over torture and investigations.

This happens all the time in our political debates.  Rather than argue the substance of the issue, there is this virtually compulsive need to assert -- with no evidence -- that "the American people" believes a certain way and that anyone who believes otherwise is fringe and isolated.  There's just no denying the fact that, as evidence of the depth of our national crimes continues to emerge, there is increased attention across the political spectrum being paid to these issues.  In today's New York Times alone, Frank Rich lays out the case for why investigations are critically necessary, and Maureen Dowd -- in an uncharacteristically cogent and substantive column -- ends with this:

I used to agree with President Obama, that it was better to keep moving and focus on our myriad problems than wallow in the darkness of the past. But now I want a full accounting. I want to know every awful act committed in the name of self-defense and patriotism. Even if it only makes one ambitious congresswoman pay more attention in some future briefing about some future secret technique that is “uniquely” designed to protect us, it will be worth it.

If CAP wants to have its representatives arguing against torture investigations, that's its prerogative, but it really shouldn't be making claims about what the "American people" and especially Democrats believe when those claims are so clearly false.

UPDATE:  It's amazing how desperate some Beltway Democrats -- and the Democratic Party establishment -- are to lead the way now in insisting that there be no investigations of any kind into the chronic crimes of the Bush administration.  Watch DNC Chairman Tim Kaine squirm endlessly on Meet the Press this morning as he advocates a position that, at least according to polls, only a small portion of Democrats share:  let's just forget about all that lawbreaking and torture stuff; who cares if our highest government officials committed serious crimes?  Is that the official position of the DNC?  Although it's obviously because he perceive it as a cynical tool to attack Nancy Pelosi, the RNC's Michael Steele seems far more interested in disclosure and investigations than Kaine does:

As usual, what must never be mentioned are the torture victims themselves, including the 100 or so that were actually killed while in U.S. custody. It can't be overstated how self-centered, petty and amoral it is for the Tim Kaines and Erica Williamses of the world to insist that their little partisan desires justify telling the victims of our torture regime that it's time for them to pipe down and accept that there will be no accountability for what happened to them because we have Important Things to do and can't and don't want to be bothered by "looking back."  What kind of a country commits brutal crimes and then insists that they can't be burdened with disclosure and accountability because they're too busy or because it's too burdensome?

UPDATE II: CAP's Matt Yglesias disassociates himself from Williams' comments, noting that (1) "it’s not factually accurate to say that the American people don’t want an investigation"; (2) part of CAP's stated goal is "try to shape public opinion," not blindly follow it; (3) "some form of accountability for what happened in the past is important"; and (4) other CAP officials have called for investigations and proceedings against Bush DOJ lawyers [though, to my knowledge, all of them, including Yglesias, oppose (or at least have serious reservations about) prosecutions regardless of whether Bush officials broke the law].

In Dowd's column today, she noted that "very few watchdogs — in the Democratic Party or the press — were pushing back against the Bush horde in 2002 and 2003, when magazines were gushing about W. and Cheney as conquering heroes."  There's no doubt about that (and Dowd notably fails to mention that both she and her newspaper were among the guiltiest media parties in that regard).  But it is that exact same faction -- the Democratic Party establishment in conjunction with the establishment media -- taking the lead once again in shielding and protecting Bush officials who repeatedly broke the law.

UPDATE III:  Kudos to Erica Williams for her acknowledgment of error.  Our political discourse would be vastly improved if more people were willing to offer such straightforward and authentic apologies for their mistakes.  As I've said any times, what determines one's credibility isn't whether they make mistakes, since everyone makes those.  What is credibility-determinative is how one responds to one's errors, and Williams responded about as well as possible.