Terrorists in Prison: is there anything the Right doesn't fear?

As always, the more frightened one is of childish fantasies, the more Serious and Tough one is deemed to be.

The "debate" over all the bad and scary things that will happen if Obama closes Guantanamo and we then incarcerate those detainees in American prisons is so painfully stupid even by the standards of our political discourse that it's hard to put into words, and it also perfectly illustrates the steps that typically lead to America's National Security policies:

(1) Right-wing super-tough-guy warriors project some frightened, adolescent, neurotic fantasy onto the world -- either because they are really petrified by it or because they want others to be ("Putting Muslim Terrorists in our prisons will make us Unsafe! -- Keep them away from me, please!!!");

(2) Rather than scoff at the inane fear-mongering or point out simple facts to reveal its idiocy, Democratic "leaders" such as Harry Reid echo the right-wing fears in order to prove how Serious and Tough they are -- in our political debates, the more frightened one is, the more Serious and Tough one is -- and/or because they are genuinely frightened of being called mean names by Sean Hannity ("Harry Reid isn't as scared of this as I am, which shows that he's weak");

(3) "Journalists" who are capable of nothing other than mindlessly reciting what they hear then write articles depicting the Right's frightened neurosis as a Serious argument, and then overnight, a consensus emerges:  Democrats are in big trouble politically unless they show that they, too, are as deeply frightened as the Right is.

Until recently, I thought the single most embarrassingly stupid event of the last decade's national security debates -- the kind that will make historians look back with slack-jawed amazement -- was the joint dissemination in the run-up to the war by the Bush administration and the American media of playing cards that featured all of the "Most Wanted" Iraqi Villains and their cartoon villain nicknames.  Saddam Hussein was the Ace of Spades; Huda Salih Mahdi Ammash -- Mrs. Anthrax -- was the Five of Hearts; Ali Hassan al-Majid -- Chemical Ali -- was the King of Spades; sadly, Dr. Rihab Rashid Taha -- the dreaded "Dr. Germ" -- didn't make it to the deck, but she certainly had her day in the American media sun (AP:  "Iraq's 'Dr. Germ' Surrenders to Coalition" -- CNN:  "U.S. military holding 'Dr. Germ,' 'Mrs. Anthrax'"). 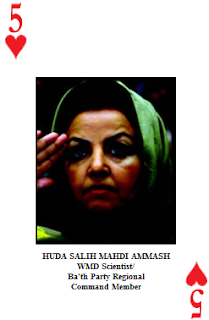 If you weren't on board with all of that -- if you weren't hiding under your bed shaking when these cartoons were shown on the TV -- that meant that you were neither Tough nor Serious.  Just as is true now, the Tough and Serious people were the ones who became frightened by the comic book villians.  All of that led to reports like this from CNN:

U.S. commanders said that they have no intention of resting until the mission is complete and they have the top prize, Saddam -- the ace of spades in the notorious deck of cards.

Saddam's sons Qusay, the ace of clubs, and Uday, the ace of hearts, died in a raid in the northern Iraqi city of Mosul. . . .Key to tracking down Qusay and Uday was the capture of the ace of diamonds, No. 4 on the list, Abid Hamid Mahmud al-Tikriti, . . . Still unclear is the fate of No. 5 -- the king of spades -- Ali Hassan al-Majid, known as "Chemical Ali" . . . . U.S. military officials said they still want to capture or kill those who remain at large and put the entire deck of cards out of business.

And this from CNN:

KELLI ARENA, CNN ANCHOR: Let's go to the Pentagon for details of that capture of another player in the Pentagon's deck of cards. CNN's Patty Davis is on the story -- Patty.

PATTY DAVIS, CNN CORRESPONDENT:  That's right, Kelli. Another big fish now in U.S. custody. The U.S. Central Command says it is retiring the six of clubs from that deck of most wanted Iraqis. Now he is Lieutenant General Husam Muhammad Amin Al-Yasin.

Now, Lieutenant General Amin was the liaison for the U.S. weapons inspectors before the war, a key figure in Saddam Hussein's weapons program.  He held briefings, giving Iraq's point of view about those inspections and could very well have valuable information about, for the U.S. about any Iraqi weapons of mass destruction. Now clearly a very big get for the U.S. On the deck of cards now, 13 of the 55 now in custody.

How can "journalists" who said such things even show their face in public?  If there were transcripts of you saying things like this on national television, wouldn't you want to go immediately leap off the nearest bridge?  Yet not a single American media organization ever questioned why they kept warning Americans about Chemical Ali, Mrs. Anthrax and Dr. Germ once there were no chemical weapons found in the entire nation of Iraq.

Despite all that, we never tire of the specter of the Big, Bad, Villainous, Omnipotent Muslim Terrorist.  They're back, and now they're going to wreak havoc on the Homeland -- devastate our communities -- even as they're imprisoned in super-max prison facilities.  How utterly irrational is that fear?  For one thing, it's empirically disproven.  Anyone with the most minimal amount of rationality would look at the fact that we have already convicted numerous alleged high-level Al Qaeda Terrorists in our civilian court system (something we're now being told can't be done) -- including the cast of villains known as the Blind Shiekh a.k.a. Mastermind of the First World Trade Center Attack, the Shoe Bomber, the Dirty Bomber, the American Taliban, the 20th Hijacker, and many more -- and are imprisoning them right now in American prisons located in various communities.

We've been doing that for two decades.  What are all the bad and scary things that have happened as a result?  The answer is:  "nothing."  Take note, Chris Cillizza and friends:  while it's true that "not a single prisoner has escaped from Gitmo since it was created," it's also true that no Muslim Terrorists have escaped from American prisons and our SuperMax prison "has had no escapes or serious attempts to escape."  Actually, the only person to even make an escape attempt from a SuperMax is Green Arrow, who hasn't succeeded despite the help of Joker and Lex Luthor.

I really want to know:  when our nation's stalwart right-wing warriors (along with Harry "Fighting the Good Fight" Reid) become petrified at the thought of keeping Muslim Terrorists in our prisons, what exactly do they fantasize will happen?  What bad things specifically do they fear are going to occur?  I asked that question last night on Twitter and these were some of the responses I received:

Atrios:  crawl up through our toilets and steal our vital essence

GeorgiePorger:  Abu Ghraib in their backyard?

akaBruno:  They'll join up with T-Bag, Lincoln Burrows and Michael Scofield and break out of Fox River

JonahKeri:   That they'll turn this into a lawless, chaotic state and make people live in a constant state of riled-up fear. Oh wait...

One right-wing warrior-blogger tried to answer the question earnestly by pointing out that in November, 200o, a Muslim Terrorist violently attacked a prison guard.  A report from the Dallas Morning News regarding prisoner-on-guard attacks found that in 2007 alone -- just in Texas -- there were "more than three dozen staff assaults with weapons."  But that's a perfect distillation of the fear-wallowing right-wing mindset:  hey, one time, 9 years ago, a Muslim Terrorist attacked a prison guard, so now we have to keep all Muslim Terrorist-prisoners in cages on a Cuban island with no trial because I'm too scared to keep them in an American prison.

Isn't it rather obvious how degraded a citizenry becomes when there's this constant effort to keep them in a state of intense fear of everything?  Even after eight long years of the Bush era, our leading political figures and media stars -- especially the Toughest and Most Serious ones -- still quiver with paralyzing fear, completely take leave of their senses, the minute someone utters the word "Terrorist" and especially the phrase "Muslim Terrorist."  The last two elections proved that Americans themselves generally are no longer frightened by this tactic, but for our political and media elites, "Terrorist" is still the supremely scary, all-purpose justifying phrase.

Here's a dramatic and deeply serious video that examines the National Security Crisis caused by Muslim Terrorists in American prisons, and illustrates the level of our political debates in Serious Circles over these matters:

UPDATE:  As always, those who most enthusiastically enable and join in with the right-wing fear-mongering campaign are the Serious Democratic Senators (h/t sysprog).

Also as always, the Right is too extreme and absurd to satirize:

Here's one thing that hasn't changed in the Obama era: Republicans are still able to come up with scare tactics that turn Senate Democrats into a terrified and incoherent bunch of mewling babies. . . .

There's no more mewling, craven, subservient entity in the United States than the Senate Democratic caucus.  That's been true for quite some time, and they have exactly the "leaders" they deserve:  Harry Reid, Jay Rockefeller, and so many others like them (even Dianne Feinstein in this case is able to summon the courage to point out how ludicrous this "controversy" is).  Froomkin lays out the details very well.

UPDATE III:  Anyone who claims that we can't transfer Guantanamo detainees to the U.S. because we don't want them to have habeas corpus rights -- as GOP Sen. Saxby Chambliss and Democratic Sen. Ben Nelson both just argued on Hardball -- is either lying or extremely ignorant.   The Supreme Court less than one year ago, in Boumediene v. Bush, already ruled that Guantanamo detainees have the right to habeas corpus review.

Everyone knows this happened.  It was a major controversy in the middle of the presidential campaign.  Numerous Guantanamo detainees have already had habeas hearings in federal court in the wake of Boumediene; many have won and some have returned to their home country.  In a document that was purportedly written by Chambliss himself, this passage appears:

On June 12, 2008, the Supreme Court issued its opinion in Boumediene v. Bush, holding that detainees held at GTMO have the constitutional privilege of habeas corpus and that section 7 of the MCA—which stripped the courts’ jurisdiction to hear habeas claims from detainees—was unconstitutional . . . .

Yet now we have two Senators on television -- including Chambliss -- insisting that we can't transfer Guantanamo detainees to the U.S. because we want to make sure they don't have habeas rights (Chambliss:  "And we need to make sure that they don't have the rights given to those criminals that are on American soil, such as the right of habeas corpus"; Nelson: "even if you didn't run the risk of habeas corpus and some of the other rights that they might be able to assert on American soil, it's inappropriate").

There's just no limit to the stupidity and deceit that spews from their mouths.  And please read Digby's whole post, particularly regarding Chris Matthews' "point" that we should just execute the detainees and the general, tacit assumption that everyone there is a Guilty, Evil Terrorist even though they've not been convicted of anything (her separate post about the politics of this "debate" and what's driving it is also well worth reading).