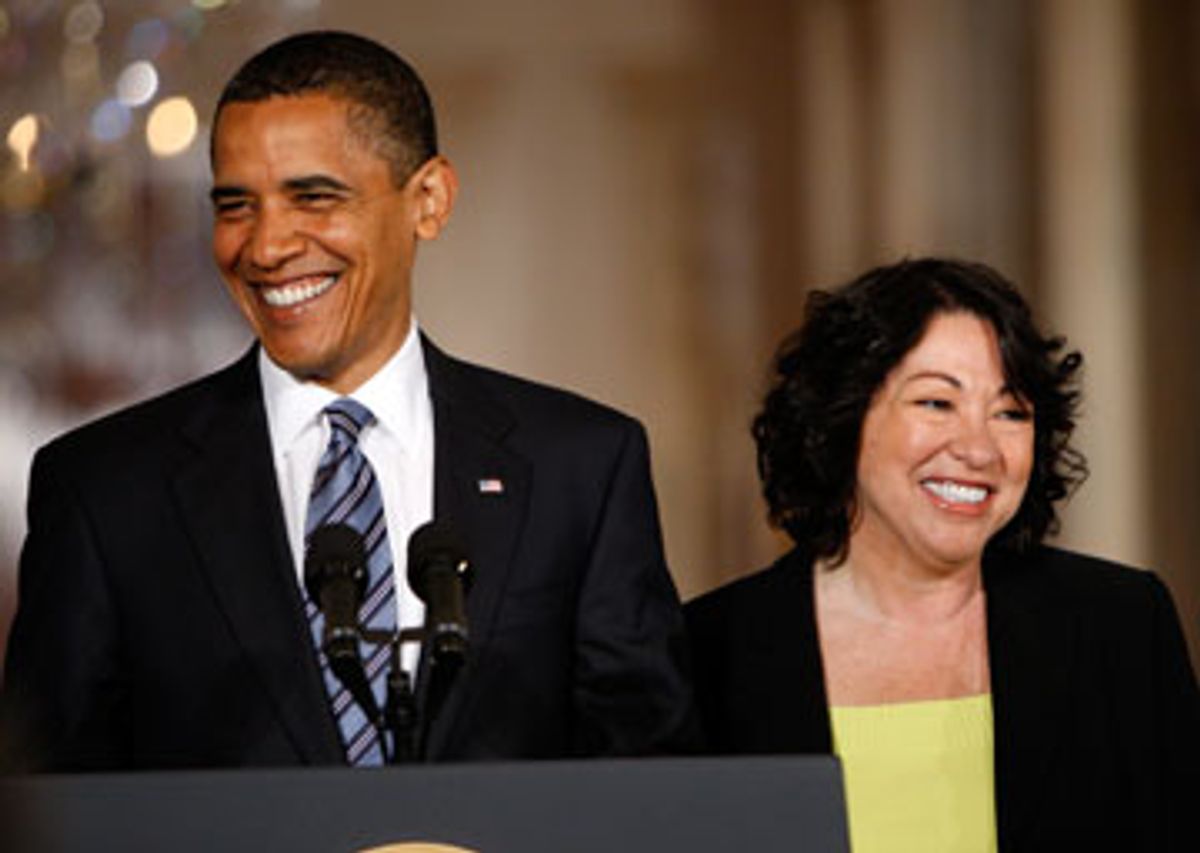 This time, Obama split the difference between a somber Memorial Day commemoration -- in the midst of two wars -- and the generic "summer's here!" hoopla that mostly greets the holiday these days. The president started his day with breakfast with families of troops killed in action, then made a brief statement on North Korea's nuclear test before heading off to Arlington National Cemetery to mark Memorial Day.

"North Korea's nuclear ballistic missile programs pose a great threat to the peace and security of the world, and I strongly condemn their reckless action," Obama said in the Rose Garden. "North Korea's actions endanger the people of northeast Asia, they are a blatant violation of international law, and they contradict North Korea's own prior commitments."

Minutes later, he piled into a motorcade to the cemetery. An Army honor guard in dress uniforms stood at attention as he drove through the grounds to the Tomb of the Unknown Soldier, and cannons boomed salutes. Obama walked silently to the tomb and laid a wreath. On his orders, wreaths were also sent to four other monuments, aides said: a memorial to Confederate Civil War dead, at Arlington, by a longstanding presidential tradition; the mast of the U.S.S. Maine and the Spanish-American War Memorial, both also at Arlington; and, in what the White House said was a first, the African American Civil War Memorial, on Washington's U Street, the historic center of the city's black community.

After the ceremony, Obama went to an amphitheater at the cemetery for a brief service. "We are indebted to all who tend to this sacred place," the president said. "Here lie presidents and privates; Supreme Court justices and slaves; generals familiar to history, and unknown soldiers known only to God." He spoke for about 12 minutes, and asked Americans to stop whatever they were doing at 3 p.m. to honor the holiday.

"I ask all Americans, wherever you are, whoever you're with, whatever you're doing, to pause in national unity at 3:00 this afternoon," Obama said. "I ask you to ring a bell, or offer a prayer, say a silent 'thank you.' And commit to give something back to this nation -- something lasting -- in their memory."

By 3 p.m., though, what Obama was doing was playing golf. Less than an hour after returning from the cemetery, he piled into a smaller motorcade of armored black SUVs and went charging down I-66 through northern Virginia to Fort Belvoir. (Traffic wasn't blocked for the trip, as it is for more formal excursions; a few cars that ignored the wailing sirens in the motorcade were shooed off to the side of the road by an extremely heavily armed Secret Service counter-assault team, their rifles visible through the open rear window of their truck.)

Through a random drawing, Salon had today's shift as in the press pool that follows Obama wherever he goes, so as he golfs, I'm sitting in the base's PX food court, about a five-minute drive away. The Secret Service reported, via earpiece radio, not long ago that the presidential golf game is about half-finished. No word on whether Obama paused at 3 p.m. to mark the holiday, as he requested, but I can report that the NASCAR race showing on the TVs overhead here in the food court did stop briefly then.

Update: A White House aide says Obama did pause his game at 3 p.m. for a moment of silence.

Of course, no matter what you think of the optics of golfing on Memorial Day, nothing Obama did today could beat George W. Bush's strange round of golf on Aug. 4, 2002. Unlike Obama, Bush brought the press pool out on the course with him. A suicide bomber had killed nine people overnight in Israel, and Bush wanted to make a statement about it. "I call upon all nations to do everything they can to stop these terrorist killers," he said. Then he turned away from the cameras and got down to business. "Thank you," Bush said. "Now watch this drive."

You, too, can watch that drive below: