Though there is much to learn about her, Sonia Sotomayor is an excellent pick for Obama. 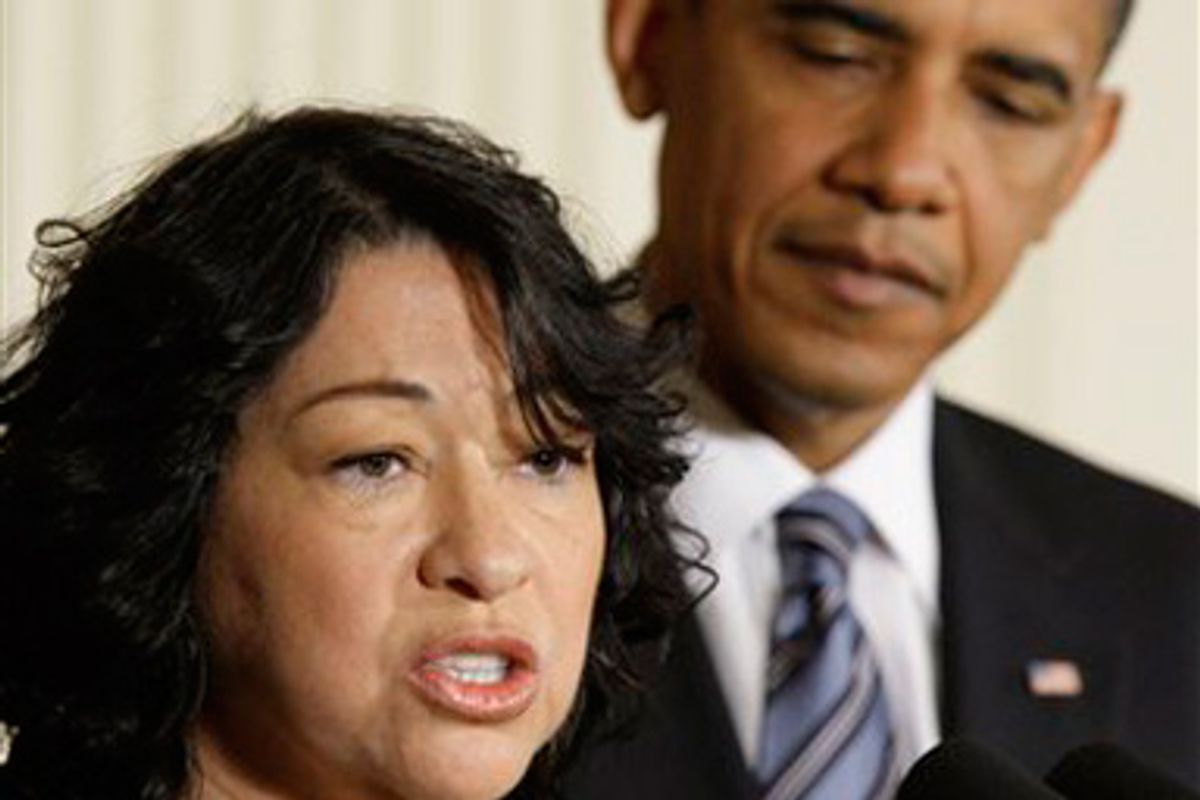 Reports indicate that President Obama has selected Second Circuit Court of Appeals Judge Sonia Sotomayor to replace David Souter on the Supreme Court.  The announcement will be made formally this morning at 10:15 a.m. EST.  This nomination should be judged principally on two grounds:  (1) her judicial opinions (which Scotusblog's Tom Goldstein comprehensively reviews here) and (2) her answers at her confirmation hearing.  But based on everything that is known now, this seems to be a superb pick for Obama.

It is very encouraging that Obama ignored the ugly, vindictive, and anonymous smear campaign led by The New Republic's Jeffrey Rosen and his secret cast of cowardly Eminent Liberal Legal Scholars of the Respectable Intellectual Center.  People like that, engaging in tactics of that sort, have exerted far too much influence on our political culture for far too long, and Obama's selection of one of their most recent targets both reflects and advances the erosion of their odious influence.  And Obama's choice is also a repudiation of the Jeffrey-Rosen/Ben-Wittes/Stuart-Taylor grievance on behalf of white males that, as Dahlia Lithwick put it, "a diverse bench must inevitably be a second-rate bench."

Obama has also ignored the deeply dishonest right-wing attacks on Sotomayor, beginning with the inane objection to her perfectly benign and accurate comments on videotape that appellate judges, as distinct from district court judges, "make policy."   Lawyer Anonymous Liberal thoroughly eviscerated that line of attack as the shallow and deceitful argument it is.  A similar avenue of certain attack -- that Sotomayor said in a 2001 speech that a female Latina judge has experiences that can inform her view of cases -- is equally frivolous.  There are a whole range of discretionary judgments which judges are required to make; does anyone actually doubt that familiarity with a wide range of cultural experiences is an asset?

It's possible to take that view too far to the point where it becomes troubling, and Sotomayor should (and certainly will) be asked about it, but the comments themselves are entirely mainstream and uncontroversial.  As reflected by my own somewhat limited experience with Judge Sotomayor -- in which, in one case, she upheld the dismissal at trial of a race discrimination claim in a case with a highly sympathetic African-American plaintiff (even after a different District Judge denied summary judgment dismissal of that claim) while reinstating the plaintiff's disability discrimination claim -- she's hardly some rabid ideologue who dispenses with legal considerations in favor of social sympathies.  Sotomayor's opinions as compiled by Goldstein, as well as those who know her best, demonstrate the same thing.  One progressive legal group, Constitutional Accountability Center, already issued a statement praising her nomination:

Constitutional Accountability Center (CAC) applauds President Obama’s historic nomination of Sonia Sotomayor to the United States Supreme Court. While CAC’s review of Judge Sotomayor’s record is continuing, we already know that she is a brilliant lawyer who is committed to ruling based on the Constitution and the law, not on her own personal political views. As Judge Sotomayor herself stated in a recent dissenting opinion: “The duty of a judge is to follow the law, not to question its plain terms.”

The next Supreme Court Justice will have a critical voice in important decisions involving the Constitution’s text, history and core principles. She will help decide cases regarding constitutional rights and liberties and constitutional challenges to laws that matter to the lives of everyday Americans -- including cases involving voting rights, pay equity, and health, safety, and the environment. In Judge Sotomayor, we believe President Obama has found a nominee who will help ensure that the Constitution and laws are faithfully applied and remain true to their intended purpose as guardians of our rights, liberties, and equality.

There are many vital issues that Sotomayor should be asked about, obviously including her views on executive power limits, which -- as Charlie Savage noted this weekend -- are largely unknown.  One's view of her selection should be shaped by things that are as yet unknown.  But judging strictly from what is known, Obama deserves substantial credit for this choice.  There were choices available to him that would have been safer among the Respectable Intellectual Center (Diane Wood) and among the Right (Elena Kagan).  At his best, Obama ignores and is even willing to act contrary to the standard establishment Washington voices and mentality that have corrupted our political culture for so long.  His choice of Sotomayor is a prime example of his doing exactly that, and for that reason alone, ought to be commended.

See also:  this post, from earlier today, on the Brookings Institution and the false claims about the presidential oath.

UPDATE: Charles Krauthammer is already snarling on Fox News, warning viewers of the possible danger that -- as he put it -- Sotomayor's "concern for certain ethnicities override justice."  He said that although her confirmation is certain, conservatives should oppose her nomination on principle and highlight that the type of justice Sotomayor allegedly represents -- justice that is unfair to white people in favor of "certain ethnicities" -- is deeply pernicious.  That is such a baseless and ugly attack on her, but almost certainly what will be a focus of the right-wing strategy.

Sotomayor's ascent from Bronx housing project to Princeton and Yale Law School to  Supreme Court nominee -- driven by merit, intellect, talent and diligence -- is nothing short of inspiring.  Ugly, baseless attacks of the kind Krauthammer recommends will resonate with nobody outside of the small rump that is now the Republican Party.

UPDATE II: Here's the primary function of the life of The New Republic.  From Red State today:

Conservatives rejoice. Of all the picks Obama could have picked, he picked the most intellectually shallow.

Even the New Republic has been rather scathing about her.

And from National Review:

If they had even a small amount of intellectual integrity, TNR Editors would be deeply ashamed of the central role they played in enabling this baseless, plainly false attack on Sotomayor as an intellectually deficient mediocrity.  But for The New Republic, there is no greater source of pride than being approvingly cited by the Right with the "Even The New Republic . . . . " head-pat.  That's their role in life, even if accomplished with patently reckless gossip masquerading as "journalism."  That's one aspect of Obama's decision that is so commendable -- discarding the sleazy tactics from our corrupted establishment Beltway sources.

UPDATE III: What is the basis for the seemingly now-widespread assumption that Sotomayor is some sort of left-wing pick?  She was originally appointed to the bench by Bush 41 and her confirmation to the Second Circuit was supported by some of the most right-wing Senators (including Jesse Helms, Rick Santorum, Bill Frist and similar types).  She began her law practice working as a District Attorney, prosecuting criminals.  Anyone who wants to characterize her as "left-wing" -- especially radical left-wing or even to the left of Souter -- should be compelled to point to specific judicial rulings or other evidence for that characterization.  The fact that she's Latina and from the Bronx isn't actually evidence of her ideology or judicial philosophy.

UPDATE IV: Along with several others, I contributed a short piece to the New York Times online discussion today on Obama's selection of Sotomayor.  My contribution can be read here.

UPDATE V: Powerline -- Time's 2004 Blog of the Year -- asks:  is Sotomayor "Che Guevara in robes?"  To raise the comparison, the author of that rancid observation uses the Jeffrey Rosen method of "reporting":  "That's how a friend of mine refers to Sonia Sotomayor," he claims.  Why is the Right so hated?  It's such a huge mystery (h/t Opinionator).

Speaking of TNR:  now that Obama has selected Sotomayor, a much different tone has emerged over there.  They have a post today from Law Professor Erwin Chemerinsky that praises Obama's selection as "brilliant" and adds:  "Everything that is known about her indicates that she will be an easy confirmation and an outstanding justice."  And even Rosen is now backtracking further from his smear piece, lamely objecting today that conservatives who are "citing [his] initial piece on Sotomayor as a basis for opposing her . . . . willfully misread[] both [his] piece and the follow-up response," Rosen now insists he believes that "Judge Sotomayor should be confirmed to the Supreme Court."  John Cole says all that needs to be said about Rosen's sudden turn-around.

Relatedly, Brian Williams, on his blog, has a somewhat cryptic post that cites Rosen's original hit piece on Sotomayor along with my response to Rosen, and implies that he's revealing some new information about that episode based on his "reporting," though it's unclear what exactly is being revealed.  Williams says that Rosen's piece "got the attention of White House staffers" but "now the original piece is under great scrutiny, as is the author's possible motives."  If anyone knows what any of that means, please let me know.  What I think Williams' note does reflect, as I speculated at the time, is that Rosen's gossipy smear attack will likely do far more damage to his own reputation than to Sotomayor's -- and justifiably so.

UPDATE VI: At his Washington Post blog, Greg Sargent documents the misleading claims being made about the "wise Latina woman" passage from Sotomayor's 2001 speech.  The always-insightful Dahlia Lithwick examines the dismal and unpromising arguments raised thus far by the Right in opposing the nomination.  Politico's Michael Calderone further documents just how widespread was the Right's use today of Jeffrey Rosen's article to attack Sotomayor's intellect, and provides some helpful background on the Rosen smear here.