Still more DVDs you should have seen (but didn't) 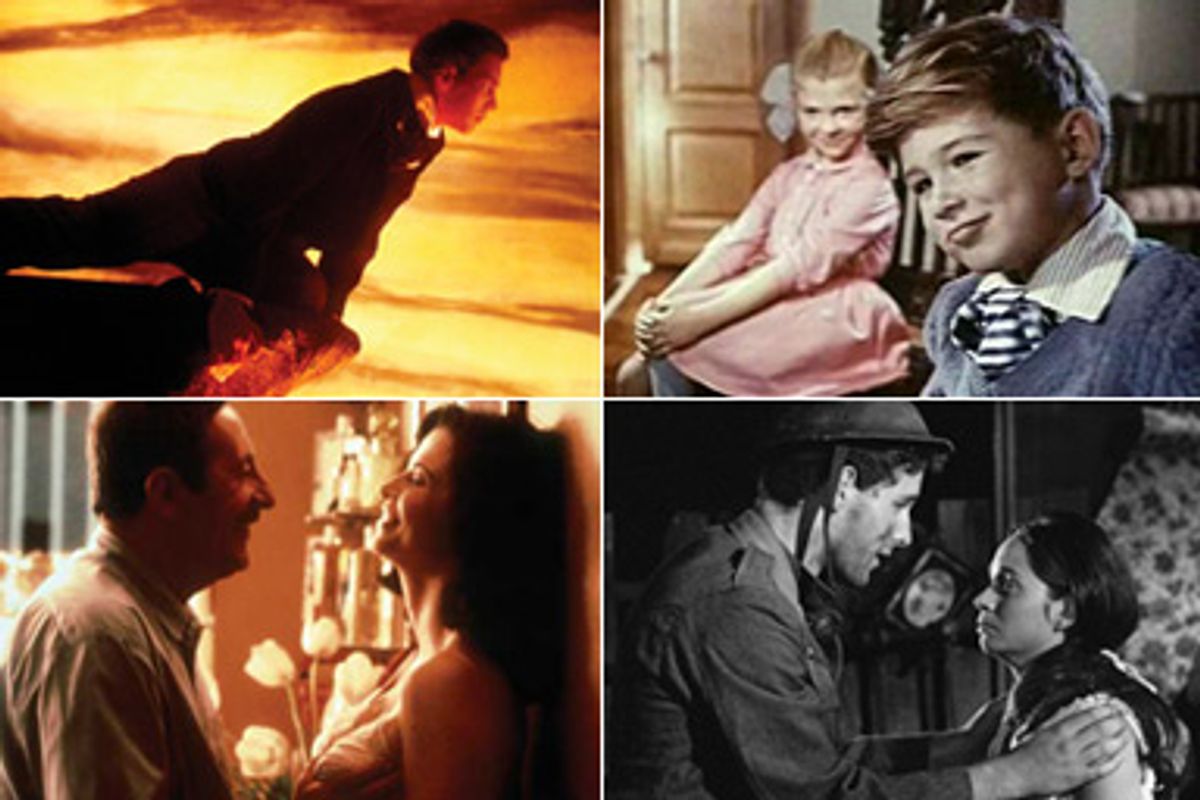 Clockwise from top left: "Careful," "The Steamroller and the Violin," "Johnny Got His Gun," "The Hairdresser's Husband."

For those of you who found last week's offerings too glaringly obvious and mainstream, here is further proof that we live in an age when no director and no film will ever be completely forgotten. OK, one selection this week is an obvious ringer, but I explain my reasoning below. Where can you find the only movie ever directed by the blacklisted writer of "Roman Holiday" and "Spartacus," the almost unknown first film from Russia's greatest director, some French arty softcore never released in the United States, and a double dose of films from a Parisian underground legend so obscure he's barely known in France? Right here, that's where.

All these videos were released within the past few weeks, but more keep pouring in, Godard help me, and I'll try to keep up a little better. As advertised previously, we're ramping up around here for another round of the Awesome Kids' Video Project, our crowd-sourced list of somewhat offbeat, largely non-Disney family summer viewing. I'll issue a formal call for submissions shortly, with a preliminary list to get things rolling. But feel free to show your cards if you got 'em. "Johnny Got His Gun" You couldn't call legendary Hollywood 10 screenwriter Dalton Trumbo's only directing effort, a 1971 adaptation of his 1939 novel about a brutally maimed World War I soldier, subtle or delicate cinema. Made on a meager budget using threadbare sets, "Johnny Got His Gun" is harshly lit, unevenly photographed and excessively talky. But its claustrophobic, artificial, quasi-mystical properties are precisely the source of its power. It resembles a 90-minute episode of "The Twilight Zone," and as that might suggest, it freaked out a generation of Vietnam-era viewers (myself definitely included). With Shout Factory's first-ever DVD release of the film, now you've got your chance.

"Johnny Got His Gun" is anchored by a peculiar, almost feminine performance from Timothy Bottoms as Joe, a quadruple amputee who cannot hear, speak or see but finds some degree of freedom in memories, dreams and encounters with a philosophical but not especially helpful Jesus Christ (Donald Sutherland). As Joe's uncommunicative but tender-hearted father -- seen both in life and as a ghost -- Jason Robards virtually steals the show. As my sister-in-law observed, "Johnny" loses some of its mind-blowing potential if you're not stoned while watching it, but it remains a blunt and devastating critique of militarism and unthinking patriotism, as well as the coda to a unique career in American film. Extras include the doc "Dalton Trumbo: Rebel in Hollywood," commentary tracks from Bottoms and cinematographer Jules Brenner, and the Metallica music video "One" (which incorporates footage from the film). "Careful" (Remastered and Repressed) Possibly the cultiest of Canadian eccentric Guy Maddin's deliberately mannered films -- which is really saying something -- gets a meticulous, gorgeous hi-def remastering from Zeitgeist. Like Maddin's other movies, the 1993 "Careful" is designed to recall an earlier cinematic era, in this case the hand-tinted colors and stilted, theatrical acting of early German talkies. Set in the fictitious Alpine village of Tolzbad, where talking, dancing and virtually any other kind of expressive behavior are forbidden (for fear of avalanches), "Careful" combines the ludicrous melodrama, incestuous lust and not-quite-buried homoeroticism that are Maddin's stock in trade. Tarkovsky Rediscovered: "The Steamroller and the Violin" / "Voyage in Time" First of all, if you're new to the admittedly slow and challenging work of Russian master filmmaker Andrei Tarkovsky, don't start here. (The Criterion Collection offers beautiful DVD editions of Tarkovsky's most famous films, "Solaris" and "Andrei Rublev.") The two films in this newly packaged double-disc set from Facets Video are marginal items from opposite ends of Tarkovsky's career: "The Steamroller and the Violin" was his diploma film, made when he was a 28-year-old student at Moscow's state-run VGIK film school, and "Voyage in Time" is a travel-diary documentary he co-directed with Italian producer Tonino Guerra in 1982.

Still, when you're talking about an undeniable genius who made only seven narrative features (Tarkovsky died of cancer in 1986, at age 54), every bit of new material counts, and these films will prove hypnotic and delightful for devotees. Officially a children's movie, the 43-minute "Steamroller and the Violin" represents an early collaboration between Tarkovsky and co-writer Andrei Konchalovsky (later an important director in his own right). From its first frames it's a gorgeously composed work, and its apparently simple story about the friendship between a bullied violin student and a steamroller driver -- on the surface, a perfect socialist-realist topic -- becomes the occasion for a haunting, sad, almost abstract meditation on streets, buildings and water, on the dreams of adults and of children. It's perfectly lovely! I'm so grateful to have seen this at last. "Voyage in Time" (my Italian is pretty bad, but I don't think that's an accurate translation of "Tempo di viaggio") is quite a different kettle of fish. It was shot during Tarkovsky's early-'80s exile in Italy, after the Soviet authorities had let him leave but kept most of his family behind, and it's hard to watch the movie without reading that knowledge into it. As he and Guerra spar about the script and Italian locations for their forthcoming film -- which would turn out to be the beautiful but not entirely successful "Nostalghia" -- Tarkovsky seems both desperately unhappy and devoted to the self-defeating mission of finding suggestions of Russia amid the landscape and architecture of central and southern Italy. The seemingly careless construction of "Voyage in Time," as we watch Tarkovsky and Guerra search for chimerical tiled floors, or dismiss the Amalfi coast as a tourist cliché, may be illusory; it offers a casual, unguarded portrait of one of the world's greatest filmmakers at work and at rest. "The Hairdresser's Husband" and "The Perfume of Yvonne" I've never known what to make of the near-total American invisibility of Patrice Leconte, a big name in French cinema. He's had a few films distributed in the United States -- "Monsieur Hire" in 1989, "The Widow of Saint-Pierre" in 2000 -- but has never had much of a following among critics or film buffs. Leconte is almost stereotypically French, which may be the problem: His movies are erotic, nostalgic and only mildly acerbic; he likes beautiful women, handsome men and nice clothes; he suggests both François Truffaut and Eric Rohmer without quite being either of them. I decline to think that any of those things are good reasons to ignore him, and present herewith these two underappreciated examples of his work, in bare-bones DVD releases from Severin Films. Philippe Garrel x2: "I Can No Longer Hear the Guitar" and "Emergency Kisses" If we're on the topic of unappreciated Gallic auteurs, however, Paris underground legend Philippe Garrel takes the gâteau. A veteran of the 1968 anti-government street uprisings -- the subject and setting, more or less, of his 2006 masterpiece "Regular Lovers" -- Garrel was also the longtime lover of Velvet Underground singer Nico, who certainly appears to be the subject matter of his 1991 "I Can No Longer Hear the Guitar," included herein. Like most of Garrel's films, "Guitar" slowly builds a trippy, meditative state out of apparently miscellaneous, formless material. If you have the patience for his work, it evokes the peculiar feeling that you've known his characters all your life, gotten high in the same crappy rooms with them, slept with them, had the same endless discussions with them. (And perhaps you have!)

A handsome, self-involved artist named Gérard (Benoît Régent) gradually wriggles free from his destructive relationship with a blond German junkie (Johanna ter Steege, in the Nico role) and suddenly finds himself with a wife (Brigitte Sy) and an infant son, although he's still a liar, a cheat and a failure. In fact, as we learn in the 1989 "Emergency Kisses," Sy was then Garrel's real-life spouse. In this tender meditation on love and inconstancy, Garrel himself plays the philandering artist at the center of the story, with wife, his father Maurice and his son Louis (then 5 years old, and today a major French movie star) rounding out the cast. Garrel is totally unafraid of self-absorption or of telling the same essential story over and over again, and he's not interested in pleasing critics or any version of a wider public in France, let alone anywhere else. He doesn't pay much attention to chronology or internal narrative consistency, and major plot developments go unexplained. I believe he's a masterful filmmaker, with a magical, transparent command of the medium, and so those choices don't bother me. I don't kid myself that large numbers of other viewers will feel the same way. "No Country for Old Men" (3-Disc Collector's Edition & Digital Copy) (also available on Blu-ray) I know, I know: This one doesn't really fit the profile. You've definitely heard about this movie, and odds are damn good you've seen it. My agenda here is twofold. The first is to violate the Prime Directive of film criticism by confessing that I didn't really get the Coen brothers' fatalistic, well-nigh nihilistic neo-western on first viewing. I was distracted by Javier Bardem's silly haircut! It was 8:30 a.m. in Cannes! Those are just excuses. When I got around to watching it again, I didn't see it as a clever imitation of 1970s American cinema but as an outstandingly crafted combination of genre film, moral parable and dark comedy. (Actually, the theatrical and DVD version that now exists is a little shorter and tighter than the film the Coens premiered at Cannes in 2007, which may account for at least a little of the difference.) So if you too were among this multiple Oscar winner's detractors, I suggest a second dip.

The second thing is to commend Miramax for doing these expensive collector's edition sets the way they should be done. Most importantly, the wide-screen, hi-def transfer looks awesome (and I haven't seen the Blu-ray version). There are a bunch of the extras you'd expect, like a behind-the-scenes doc and multiple TV interviews with the Coens, Bardem and Josh Brolin, and some nice surprises, like Brolin's funny on-set home videos. There's stuff you'll never get to, like acres of audio interviews. There's also an easily transferable digital copy of the film included, which you can watch on your PC and/or iPod with either iTunes or Windows Media. That's certainly not a brand-new innovation, and it's easier for a big corporation like Disney to do this stuff than it is for an indie distributor. But that's the kind of added value that can keep the DVD business alive at least a little while longer.