From Kate Gosselin to Elizabeth Edwards to Facebook users, the scorned are flaunting humiliation like never before. 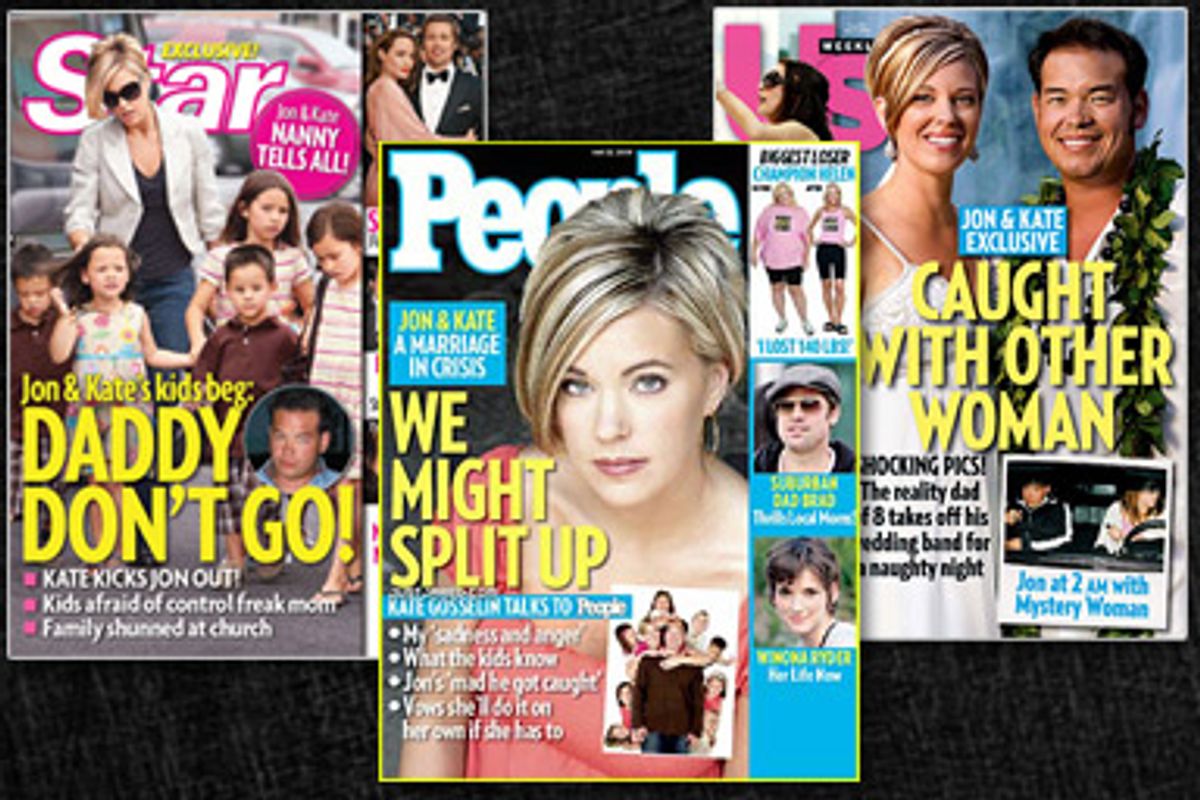 If there remained any doubt as to the magical moneymaking properties of humiliating self-exposure, it evaporated Monday night as almost 10 million viewers tuned in to watch the wheels come off the bus of TV's most lovable octo-family, the Gosselins. The new season of "Jon & Kate Plus 8" attracted twice the viewers of last season's finale, more than any other show on TV on Memorial Day, and it's probably safe to say it wasn't the promise of birthday party fun that drew them. For weeks, star Kate Gosselin had been trolling for sympathy in the pages of People magazine and Us Weekly as soon as it came to light that her husband had not only been unfaithful, but creepily unfaithful. The shame parade paid off, if not in her marriage then in her ancillary career: TLC has booked them for 40 more episodes.

Until recently, standard protocol for handling a humiliating personal betrayal in public was to tough it out. This rule applied mainly to public figures who had no choice but to handle such challenges with all eyes on them, like political wives, who were required to stand by their men in purse-lipped silence, hands folded, eyes cast hellward, or celebrities, who were obliged to pretend to work through their painful feelings in public while carefully drawing the line at revealing anything that might jeopardize future career prospects. In both cases, the same general rule held true: The more painful the humiliation, the greater the need to maintain dignity by refusing to stoop to the humiliator's level.

But those days are over. Thanks to the increasingly public nature of our lives, the ranks of people who might find themselves having to deal with private humiliations in public have now expanded to include basically everybody. And a surprising number of people recently have trumpeted their private grievances against the bastards who done them wrong, using whatever means are readily available to them. Ailing wife of the former presidential candidate Elizabeth Edwards, most prominently, used "Oprah," the "Today" show and "The Daily Show" to get back at the tramp who seduced her husband. In January, Prince Harry's ex-girlfriend broke up with him on Facebook. Tony Blair's sister-in-law Facebook-divorced her husband after a fight. A couple of weeks ago, former New Yorker staffer Dan Baum breached the Kremlinesque secrecy of his erstwhile employer when, in the name of transparency, he tweeted the details of his firing while painting a less-than-flattering portrait. And Veronica Lario, the long-suffering wife of Italian Premier Silvio Berlusconi, let her priapic husband have it (predictably with a lot more panache than Edwards) when she publicly accused him of consorting with an 18-year-old and supporting the political ambitions of models and starlets. "The impudence and shamelessness of power offends the credibility of all (women), damages women in general and especially those who have always struggled to defend their rights," Lario said to the Italian news agency ANSA. Sisterhood is powerful, but revenge is pretty sweet, too.

While it's hard not to side with Lario, whose lashing out, no matter how self-serving, practically constitutes a public service, Baum, Edwards et al. come across as having murky motives. It's not just that they have books to sell. What's interesting (and similar) about these stories is that it's easy to imagine how the behavior started out as fervent revenge fantasies, the kind that have crossed the minds of everyone who has ever been cheated on or fired. As recently as last year, marshaling the power of the Web to get back at one's ex was considered pretty pathological behavior. When the YouTube divorcee Tricia Walsh-Smith went viral after posting a video disclosing the juiciest details of her collapsed marriage to a Broadway mogul, her story launched a thousand expert opinions about the legal ramifications and psychological effects of living our lives in public. Similarly, when the gossip blog Valleywag publicized the relationship between Wikipedia founder Jimmy Wales and former Fox News commentator Rachel Marsden by publishing their IM chats, and Wales responded by announcing on Wikipedia that they weren't together anymore, nobody thought Marsden a hero, or even a person in her right mind, when she retaliated against Wales on eBay and Knol. But that was last year. This year, according to a British poll, nearly half of all people under the age of 21 and 18 percent of 22- to 30-year-olds have publicly dumped someone by announcing it on Facebook, Twitter or something similar in the past 12 months.

"Self-righteousness makes people feel superior," says Pauline Wallin, a psychologist in Camp Hill, Pa., and the author of the book "Taming Your Inner Brat: A Guide to Transforming Self-Defeating Behavior." "People always find a logical reason for what they want to do -- like, that company fired me, the world needs to know what they're really like. We decide emotionally and justify rationally. We decide first, justify later." In other words, there's nothing like getting screwed over to bring out the smugness and moral superiority in everybody. And, these days, who isn't getting screwed over? The fact that we're all just an angry e-mail, late-night status update, drunken text message or hormonal tweet away from more disclosure (self- and otherwise) only adds to the already considerable anxieties of the age. Technology doesn't cause lack of impulse control, it just creates a nice, dark, moist and warm environment in which it can thrive.

It's possible, if improbable, that there could be something healthy in the impulse to take ownership of one's own humiliation and cash it in for attention and money, if not sympathy. Maybe it's a sign of idealism, in an endearing belief in the goodness in people and the brotherhood of man that makes people trot out their lowest moments like circus ponies. Or maybe it's just the result of a long, slow process of indoctrination. As long as there have been formulaic Hollywood movies, there have been scenes in which the bad guy gets his very public comeuppance. At the end of "Dangerous Liaisons," for instance, Glenn Close's character, the evil Marquise de Merteuil, gets booed at the opera after the virtuous young Chevalier Danceny reveals her evil schemes to the world by publishing her letters to Valmont. It seemed like a powerful, satisfying scene to me when I first saw it in college, but it drove my French film professor crazy. "No French person would do that," he said. He didn't mean the shunning. He meant the unified public expression of it. He meant everyone coming together for an unembarrassed, cringingly sincere public display of moral opprobrium. In the movies, casual onlookers can always be called upon to join in a chorus of disapproval against the villain, thereby validating the victim’s victimhood and eradicating all grievances against him in one fell round of applause. In real life, and especially in reality TV, we treat such displays with malicious, rubbernecking glee. The more technology allows us to prop ourselves up by putting everyone else down, the more we'll level our blunderbusses at every passing ant.