Movies not to miss: "Munyurangabo"

An American indie filmmaker's amazing Rwandan odyssey. Plus: Blame Canada! (For the virus eating your brain.) 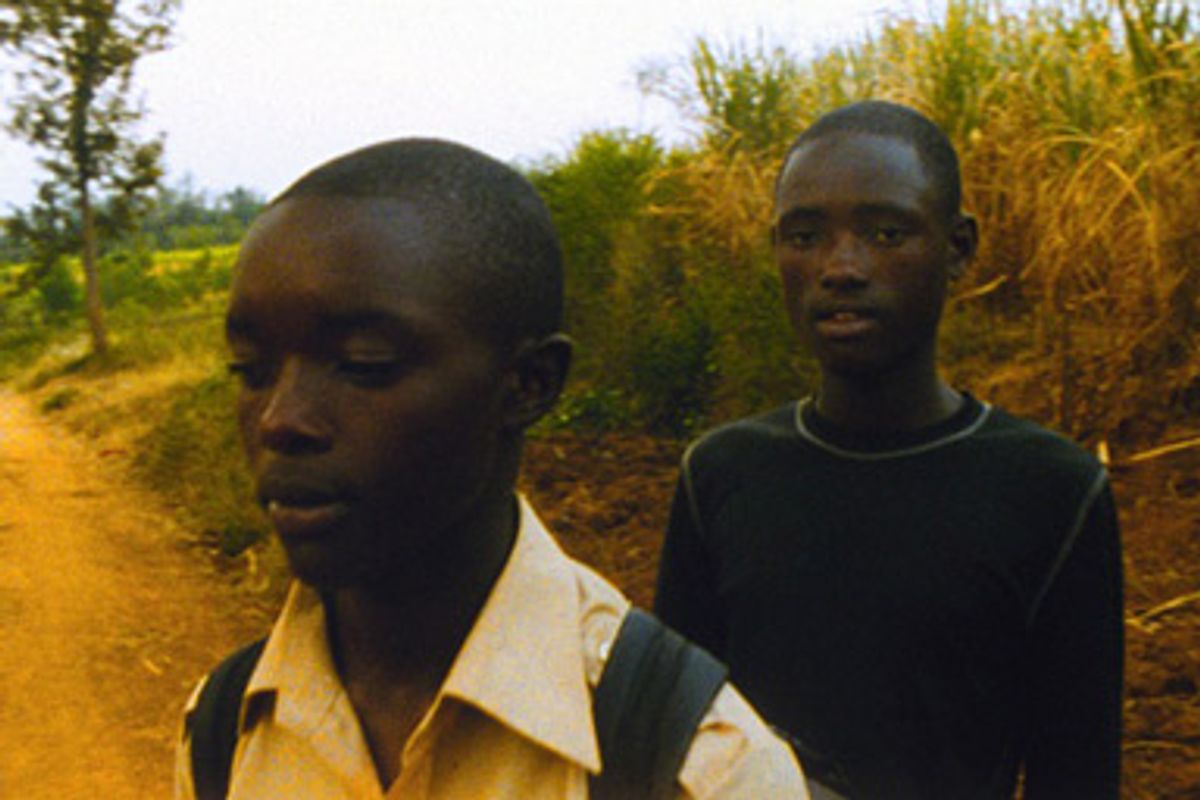 "Munyurangabo" is an independent feature film shot in Rwanda by a young American director, and in a case like that, the story of how the movie got made always threatens to overwhelm the movie itself. So, yeah, it's a hell of a good human-interest story and let's get it out of the way first. Director Lee Isaac Chung (who also shot, edited and co-wrote the film) isn't just a 30-year-old American with no African connections or heritage. Just to ramp up the improbability index a bit more, Chung is also the son of Korean immigrants who was born in Denver and raised on a farm in rural Arkansas, but who found himself, in 2006, making a movie about a troubled Hutu-Tutsi friendship with a class of 15 Rwandan film students, some of them genocide orphans and returned refugees.

That makes "Munyurangabo," at least superficially, seem like an extreme example of the recent, under-the-radar mini-trend you might call indie globalization. Several American filmmakers from middle-class backgrounds have lately chosen to leave their own societies behind in search of inspiration, including Cary Joji Fukunaga (who made the thriller "Sin Nombre" in Mexico), Chris Smith (who made the gentle drama "The Pool" in Goa, India) and Chris Eska (who made "August Evening" among the Spanish-speaking immigrants of south Texas). Such movies are virtually critic-proof, in the sense that it's remarkable they were made at all, the intentions behind them are evidently pure, and it's unlikely they'll make any money.

All of that is true about "Munyurangabo," so my task here is to convince you that this movie is something special even without its peculiar back story, or the fact that it's the first narrative feature ever made in the Kinyarwanda language. Shot in just 11 days, it's an atmospheric, compelling journey into a country still haunted by the unmentionable, that being the near-genocidal 1994 massacre of at least 500,000 Tutsis and others by members of the Hutu majority. At first, best friends Ngabo (Jeff Rutagengwa) and Sangwa (Eric Ndorunkundiye) seem like a happy-go-lucky pair of drifters, heading out from the big city on a road trip after the fashion of young men everywhere. But their unspoken mission involves a stolen machete and a fabricated cover story, and we gradually understand that Ngabo is a Tutsi whose father was killed during the massacre.

Furthermore, Sangwa is a Hutu who hasn't thought long enough or hard enough about bringing his new big-city friend back to his home village, where his taciturn, abusive father (the imposing Jean Marie Vianney Nkurikiyinka) still harbors intense ethnic animosity and his mother struggles to keep the family afloat. Add powerful village beer and dire poverty, and our two friends are impaled on a dilemma that seems torn from Greek myth, or from a Hitchcock film: Will Sangwa's eagerness to please his father outweigh his love for his buddy? What will happen when Ngabo finally finds the man who killed his father?

Directors like Smith and Fukunaga have gone to great trouble to ensure that their movies feel indigenous (admittedly an amorphous and problematic concept), recruiting nonprofessional actors from the local population and working with local technicians and craftspeople. Arguably, Chung goes even further into this paradox: His primary purpose was to enable his Rwandan collaborators to make a Rwandan film, and in some sense the fact that he wound up with a product that has now been to festivals in Cannes, Toronto, New York and elsewhere was an accidental byproduct of that process. Could you construct an argument that he has somehow manipulated or exploited his cast and crew in a careerist quest for fame? In the abstract, maybe you could, but see the movie before you cast aspersions.

If Smith's "The Pool" felt like an attempt to channel the spirit of the great Indian director Satyajit Ray, then "Munyurangabo," a story of family and friendship that is by turns ominous, tender, violent and didactic, clearly suggests the African art-film tradition of Ousmane Sembène, Idrissa Ouedraogo and others. It's raw and rough, but beautifully photographed and classically constructed, with an undercurrent of awful tension and a lyrical sensibility. I see it as a movie that embraces its contradictions and finds a startling wholeness in them. Maybe a Korean-American Arkansas farm boy has no business making a terrific African film, but he went ahead and did it anyway.

"Munyurangabo" is now playing at Anthology Film Archives in New York. Opens June 12 in San Francisco, June 26 in Seattle and July 24 in Chicago, with more cities to follow.

"Pontypool" If you're a devotee of the deranged mind of Canadian indie auteur Bruce McDonald, director of "The Tracey Fragments" and the unbelievably great punk mockumentary "Hard Core Logo," then I can just tell you that he's made a horror movie (kind of) and that "Pontypool" is it. Awesome, right? If you need more explication than that, I'm in trouble. OK -- "Pontypool" is something like a claustrophobic, locked-in-the-barn zombie movie, only almost without zombies. It's mostly set in a church basement, where a washed-up morning-radio shock jock (Stephen McHattie) becomes the world's principal source of information on the mysterious apocalyptic virus that is turning the inhabitants of snowbound Pontypool, Ontario, into ravening cannibals. Except it seems that the virus is spread by words and sounds -- by language, in fact -- so by reporting on the epidemic, the cowboy-hatted drunkard at CLSY may actually be spreading it. "Night of the Living Dead," as rewritten by Laurie Anderson and Jacques Derrida. (Now playing at Cinema Village in New York, with other cities to follow. Also available on-demand from IFC In Theaters on many cable-TV systems.)

"What Goes Up" Kind of a nifty little tragicomic late-'80s period piece in a familiar indie vein, starring British comic Steve Coogan as a slimeball New York reporter who has faked a Pulitzer-nominated story and desperately needs some measure of redemption. He finds it in a New Hampshire small town that just happens to be the home of doomed space-shuttle schoolteacher Christa McAuliffe. Along the way to the Challenger launch, Coogan's character becomes enmeshed in the aftermath of an old friend's suicide, which involves a klatch of stoner misfits and horny nymphets (among them Hilary Duff, Josh Peck and Olivia Thirlby). This might not be distinctive enough to wriggle free of its "Napoleon Sunshine vs. the Juno Wackness" niche, and hence will yet again not be Coogan's breakout vehicle. But director and co-writer Jonathan Glatzer handles his talented cast well, and the movie is dark, droll and sentimental in roughly the correct proportions. Worth a look. (Now playing in New York, Los Angeles, Chicago, Las Vegas and Buffalo, N.Y., with more cities to follow.)