The Pentagon says no sexual abuse, no Abu Ghraib photos among those held back in ACLU suit. 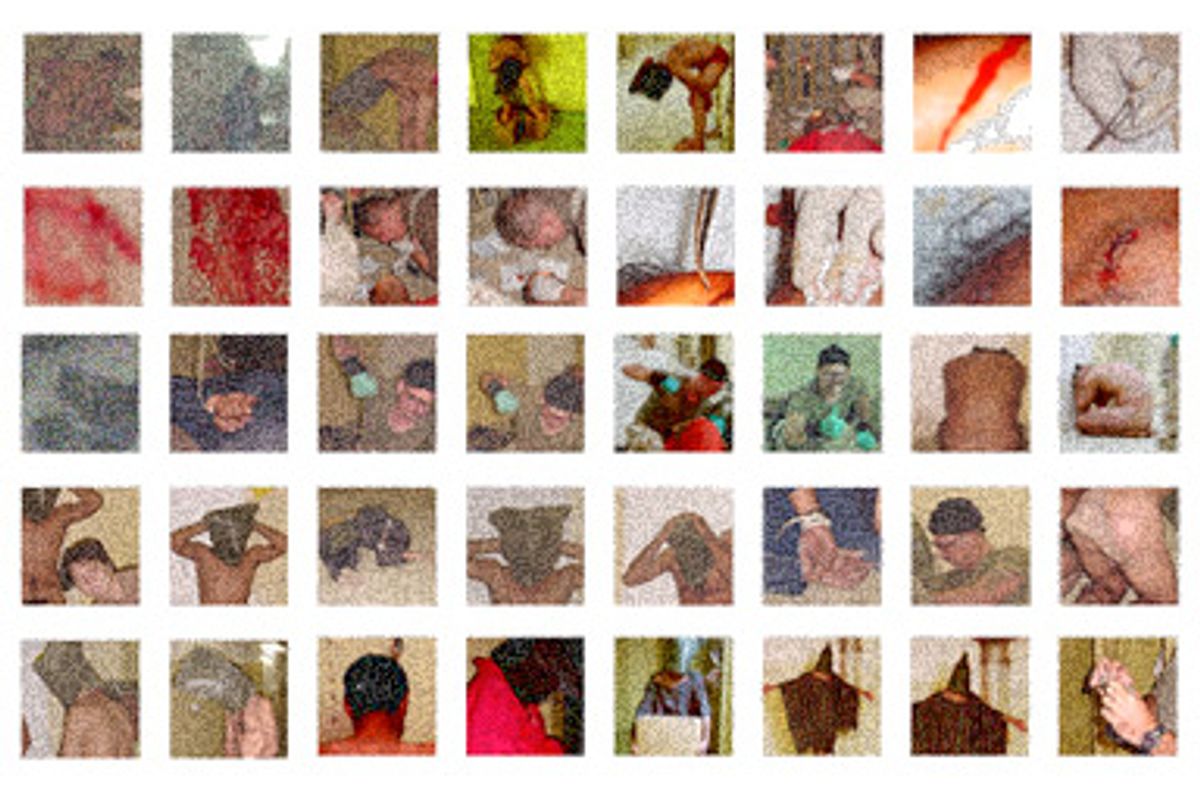 Last Thursday, the Obama administration asked a federal court to block the release of images that depict detainee abuse in Iraq and Afghanistan. The court had sided with the American Civil Liberties Union in its request that the administration release the photos. The administration's move seemed to lend credence to swirling rumors on the Internet that the administration was suppressing a cache of images showing sexual abuse of detainees. The day of the administration's request to the court, Britain's Daily Telegraph published a story claiming that the images included rape and sexual abuse of prisoners at Abu Ghraib prison and elsewhere in Iraq and Afghanistan. On Friday, the Daily Beast reported that many of the photographs were "sexually explicit" and included images of "a uniformed soldier receiving oral sex from a female prisoner, a government contractor engaged in an act of sodomy with a male prisoner" and "penetration involving phosphorous sticks and brooms."

What do these unreleased images actually depict? A Defense Department official who has seen the unreleased images consented to give Salon some details. Salon agreed to keep the identity of the defense official private in exchange for the opportunity to interview a person with firsthand knowledge of the images.

Specifically, the official said there are about 2,000 images related to detainee abuse, none of which are from Abu Ghraib, and the images do not include depictions of sexual abuse. The official said the government does not have secret images of rape buried in its files.

The official told Salon that the Pentagon has compiled around 2,000 images of possible detainee abuse in response to the ACLU's suit. Salon then asked, via e-mail, whether any of the 2,000 images "[show] a possible rape or sexual abuse" of the sort described in the media recently. The Daily Telegraph had reported that there were images of a male soldier forcing oral sex on a female detainee and a male translator anally raping a male detainee. "We don't have anything that would comport to what they are reporting," the official answered. (The official did not address whether any such images had ever existed.) Retired Maj. Gen. Antonio Taguba, whom the Telegraph had quoted as confirming that there were rape images among the unreleased material, told Salon on Friday that the Telegraph's report was inaccurate because he was quoted in a way that suggested he had seen the unreleased material. He has not. (The Daily Beast has since corrected its Friday story to say that none of the 44 photos "subject to the ACLU lawsuit and reviewed by President Obama" are sexually explicit.)

Salon contacted the White House to ask why, if there is no videotape or photos showing sexual abuse, the administration continues to fight the release of further images. An official referred Salon to President Obama's own explanation that the pictures add little to the torture debate. "I want to emphasize that these photos that were requested in this case are not particularly sensational, especially when compared to the painful images that we remember from Abu Ghraib," Obama said on May 13 when he announced that he would reverse course and fight the release of the images.

"This is not a situation in which the Pentagon has concealed or sought to justify inappropriate action," Obama added. "In fact, the most direct consequence of releasing them, I believe, would be to further inflame anti-American opinion and to put our troops in greater danger."

In addition to describing what the images do not show, the official provided some limited information about what they do show. In response to the ACLU suit, the Defense Department culled the 2,000 images from the files of military investigations into cases of alleged detainee abuse. The pictures include shots of possible abuse taken by soldiers that were later obtained by military investigators. According to the official, the investigators themselves created some of the rest of the 2,000 images during their investigations. They took pictures -- like a photo of a bruised and banged-up detainee -- while gathering evidence.

Some of those 2,000 images, including those generated by investigators, come from cases in which the military determined that abuse had not, in fact, occurred. "You could have an image where you could have a bruised detainee, but upon investigation was not found to be abuse," the official explained.

The official added that the Defense Department has already sent the ACLU redacted copies of the investigations behind the 2,000 still-unreleased photos. Those documents describe the alleged abuse behind the photos. "They have the actual investigations, redacted," the official said about the ACLU. "They want the photographs also. It is not like they don't know what was investigated."

"You have to ask what is their purpose for being so adamant about the photos, since we have already provided the information to them -- minus the photographs."

The ACLU's Amrit Singh confirmed that her organization had received written material on military investigations into detainee abuse allegations. Singh said, however, that while sometimes there is a reference to a specific photo inside those investigative documents, the Pentagon did not hand over an itemized list of 2,000 images. She also pointed out that the ACLU could not confirm that they have all the investigations connected to the unreleased photos, since they have not seen the photos.

In fact, said Singh, until she was called by Salon, she did not even know how many photos the military had compiled. She did not know there were 2,000. "We have no way of knowing anything," she said.

On Monday the Supreme Court gave the Obama administration 30 additional days to make its case for why the photos should not be released.