Sure, killing a doctor's wrong -- but don't overreact! 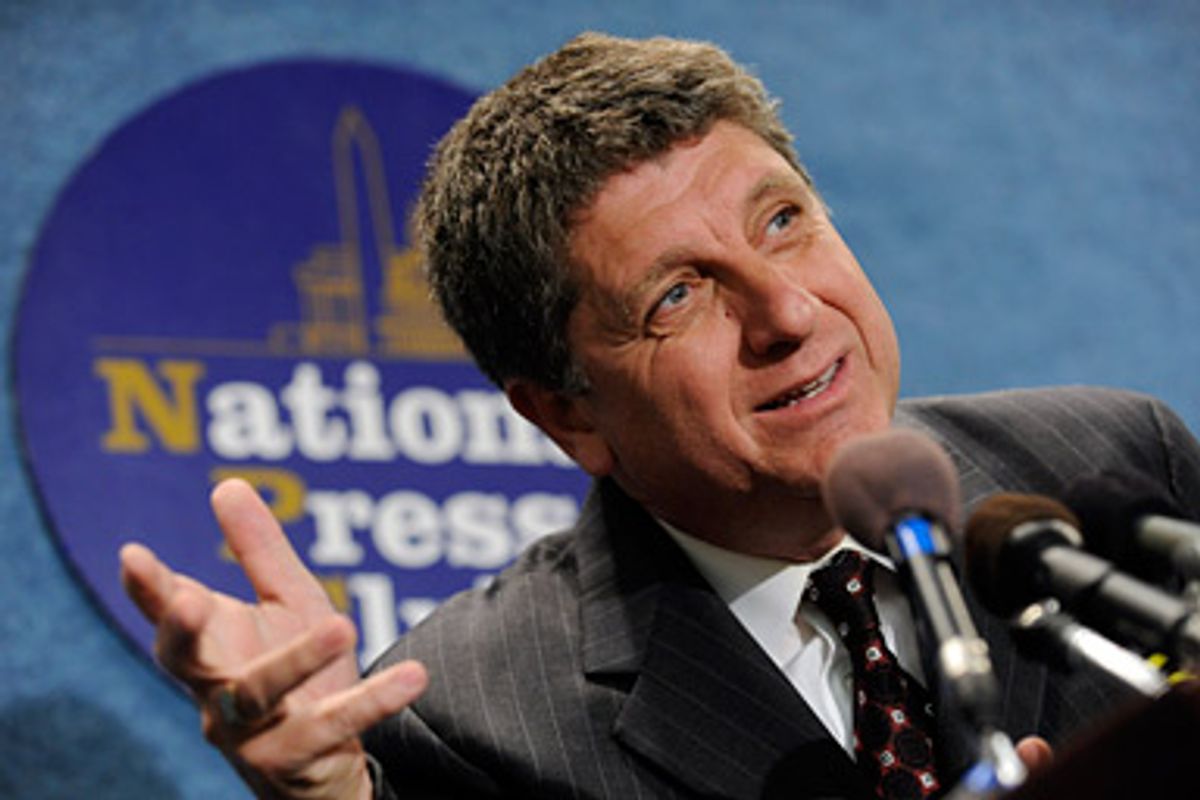 Operation Rescue founder Randall Terry speaks during a news conference at the National Press Club in Washington, Monday, June 1, 2009, on the pro-life movement and the murder of Dr. George Tiller in Wichita, Kansas on Sunday.
--

A day after Dr. George Tiller was murdered in his Kansas church, antiabortion groups had an urgent message for policymakers Monday morning: Sure, killing is wrong, but let's not overreact here.

"We call upon President Obama, Speaker Pelosi, Majority Leader Reid, pro-choice leaders in the House and the Senate not to repeat the mistakes of the Clinton administration in the mid-'90s and use this tragedy for political gain," said the Rev. Patrick J. Mahoney, head of the Christian Defense Coalition. Mahoney called a press conference on the steps of the Supreme Court to condemn Tiller's murder -- and also to hype last month's Gallup poll that found a narrow majority of Americans described themselves as "pro-life" rather than "pro-choice." (Never mind that a clear majority in the same poll also said abortion should be legal at least under certain circumstances.) "We have the loss of a life here. It would be a double tragedy for those who oppose the pro-life movement to take this episode and use it to paint the pro-life movement with a broad brush of extremism and violence."  Mahoney couldn't manage to make Tiller's death sound very tragic, however. He got more worked up talking about President Obama's pro-choice policies. He read aloud a statement by the head of an allied organization, Operation Save America, that began, "Someone chose to end George Tiller's life," before moving on to pro forma condolences.

The administration sent U.S. marshals to protect abortion clinics on Monday, and pro-choice groups and advocates for abortion providers said they expected the Justice Department to bring the full force of the law down on Scott Roeder, the suspect in Tiller's death. But the message from Mahoney, basically, was that no matter how committed Roeder was to the anti-choice cause, there's no reason for the government to do much about it. And that Homeland Security report warning of right-wing terrorism? Still overblown, as far as Mahoney was concerned. He complained that it suggested pro-lifers and "other people of good will" were "somehow connected to terrorism."

Antiabortion activists had reason to be worried Monday. Tiller's murder is unlikely to help them win over more converts to their cause, regardless of the Gallup poll Mahoney was touting. The press conference was in front of the Supreme Court in part because pro-lifers worry that Sonia Sotomayor is some sort of radical pro-choice zealot, but her actual record on the issue is so thin that the White House had to meet with choice groups to reassure them. Still, the slaying probably means Republicans in the Senate have even less incentive to turn her confirmation hearings into a referendum on abortion. Sotomayor will begin a round of meetings with key Senate Judiciary Committee members on Tuesday, and aides say the Senate is on track to get hearings going later this summer.

So there was a hint of desperation to Mahoney's presser, even if the P.R. impulse -- to keep Roeder from becoming every pro-life activists' problem -- was sound. Flanked by hymn-singing protesters from Operation Save America, which says it "employs only biblical principles" in its fight against abortion rights, and another group of silent protesters from Bound4Life with red tape over their mouths (and iPod headphones in their ears), Mahoney and his allies seemed to represent a loopy, eccentric fringe; one man held an enormous shofar, a ceremonial ram's horn used for Jewish High Holy Day services, as the group asked Jesus to help them.

But right-wing reaction to Tiller's murder actually got a lot crazier than that on Monday. "The pro-life movement, and pro-life leaders, are not responsible for George Tiller's death," said Randall Terry, the now-ousted founder of Operation Rescue, which blocks access to abortion clinics around the nation, at his own press conference later in the day. "George Tiller was a mass murderer and horrifically, he reaped what he sowed." The reporters in the room sat in stunned silence for almost 10 seconds, before I asked him if he was blaming Tiller for his own murder.

"The man who shot him was responsible," Terry said. A few minutes later, though, he made it pretty clear what he really thought. "The whole point of this story should be, in part, what did George Tiller do that was so horrifying that it drove this man to that extremity?" If Mahoney's news conference seemed like a desperate attempt to keep blame away from the pro-life movement, Terry's just seemed like a desperate grab for attention. Once he wrapped up, he invited reporters to buy him a beer and some snacks -- "I like Guinness, for those of you who want to have a beer somewhere; I prefer my chicken wings really hot, and a little crispy."

Even by Terry's own standards, which include a career resurrection as the head of the campaign to save Terri Schiavo, and a stint pushing a bloody doll in a baby carriage around the Notre Dame campus, it was a bizarre performance. Earlier in the day, asked about Terry, Rob Schenck, who heads Faith and Action, had tried to distance the antiabortion movement from Terry almost as much as from Roeder. "A lot of pro-life leaders of the past are not carefully and prayerfully thinking through the moral consequences of an act like this," Schenck said about Tiller's murder. Maybe if Terry didn't have his mind on chicken wings, he would have realized blaming the victim represented a problematic strategy for building political support.

Of course, to abortion rights advocates, none of the rhetoric out of the right was surprising. "I don't see [Terry] trying to distance himself" from Tiller's murder, said Vicki Saporta, president and CEO of the National Abortion Federation, the professional association of abortion providers. "I see him trying to rationalize and justify what can't be justified. And the type of rhetoric he espouses and the activities of some of these antiabortion extremist groups are responsible for acts of violence." NAF's statistics (pdf) show actual incidents of violence against abortion clinics and providers declined during the last eight years, but since President Obama's election, threats have increased. "Sometimes when antiabortion extremists feel that they don't have legislative, political, judicial ways to address this issue, they resort to violence," Saporta said. "In a civilized society, we really can't allow antiabortion extremists to use violence to advance their own personal political agendas."

Strangely, though, outside the world of abortion politics -- no matter what side -- most of Washington seemed oblivious to Tiller's murder. The issue didn't come up during White House press secretary Robert Gibbs' daily press briefing, where reporters instead focused on GM's bankruptcy filing and, of course, the pressing question of why Obama flew to New York to see a play on Saturday night. White House aides didn't even distribute talking points about the administration's response to the murder to a group of surrogates and allies who were planning to appear on cable TV during the day; a senior official said no one was being asked about it, so there was no need to prep them for the question. Members of Congress were slowly trickling back into town after their weeklong Memorial Day vacation. A vigil was scheduled outside the White House for 6:30 p.m. –- too early for candlelight to be seen clearly, too late for the evening news. Somehow, it seemed hard to believe that someone could be murdered -- in his church -- for doing his job, a job the White House says it supports his right to do, without the capital taking much note.