Chairwoman Slaughter: FOIA as sacred as Social Security and Medicare

In my interview with her yesterday, Democratic Rep. Louise Slaughter -- the Chairwoman of the powerful House Rules Committee -- explained her vehement opposition to the Graham/Lieberman amendment by making a critical point:   the Freedom of Information Act, which Graham/Lieberman is designed to gut, was one of the most significant pieces of Democratic Party legislation in the last 50 years, and is as central to the Democratic Party's political value system as any other single program.  This is how she put it:

I was startled to see [the amendment] in the bill.  I don't want to suspend FOIA for anything, certainly not for political exepdiency . . . . [FOIA] was a Democrat program under Lyndon Johnson for transparency in government and we should never do anything to interfere with that . . . . For us to go to this extraordinary length to interrupt a court case – and to do something that is offensive to me on the face of it, as well as a number of my colleagues -- doesn’t make any sense. . . .

There is a strong principle involved here in transparency. Why would we buckle under to Lieberman and Graham anyway? I think [changing FOIA to get around court decisions] would be deplorable and be a terrible precedent – and unlike the Democratic Party that I know and love.  FOIA is as sacred as Social Security and Medicare.

For Democrats, "FOIA is as sacred as Social Security and Medicare."  If Democratic members of Congress aren't willing to defend the decades-old transparency law which they long championed -- all because a Democratic President now wants the power to override it and two neoconservative Senators are spewing the rankest fear-mongering in order to compel its abandonment -- then what will they defend?  Wasn't one of the main criticisms of the GOP Congress that they abdicated their duties to impose checks on the GOP President and instead capitulated to all of his demands, all because they were members of the same party?  Why would the Democratic Congress want to replicate that behavior and allow a Democratic President to constrict their own long-standing transparency law?

This, of course, has long been the primary criticism of the Democratic Party establishment:   there are no "core values" that they are willing to defend.  For years under Bush, most Democrats in Congress were petrified about voting against war funding bills -- even when they contained unrelated amendments they found offensive -- because they were so scared that they would be accused of "failing to support the troops."  Yet Joe Lieberman and Lindsey Graham are perfectly willing to threaten to vote against the current war spending bill and hold up the whole Senate -- and the entire GOP House leadership (the same people who long equated opposition to war spending bills with a "failure to support the troops") also said they would vote against it due to their opposition to the IMF funding it contains -- because they're willing to incur those political risks in defense of what is important to them, however warped and hypocritical it might be.

Overriding adverse court decisions with new laws designed to gut long-standing legal frameworks -- all in the name of Terrorism -- was the defining attribute of the Bush era, particularly his second term.  That's exactly what gave us the Military Commissions Act, retroactive immunity, and the Protect America Act.  Indeed, this is a repeat of the FISA debacle:  just as the long-standing FISA framework already vested the government with extremely broad eavesdropping powers and there was no need to override it and block courts from applying it, FOIA already vests the President with extremely broad secrecy powers, especially in the national security area.  There's no reason to override it and block courts from applying it.  If there are good and legitimate reasons to suppress these photos under our normal transparency principles, then the President will win in court.  There's no justification for changing our transparency framework to accommodate the desire to suppress war crimes evidence (of all things), and there's every reason not to do that.

If Congressional Democrats are willing to vest the President with the unilateral, unreviewable power to override FOIA -- which, as Chairwoman Slaughter says, is one of the crown legislative jewels for the Democratic Party, "as sacred as Social Security and Medicare" -- what aren't they willing to do for him?

UPDATE: Here's how Lyndon Johnson ended his 1966 signing statement (.pdf) when signing FOIA into law -- at the height of both the Vietnam War and the Cold War (his signing statement was prepared by his Press Secretary, Bill Moyers): 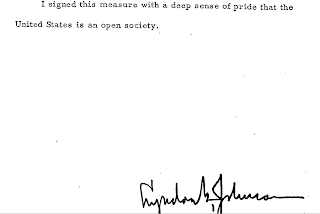 A superb history of how FOIA was enacted was compiled for Nieman Watchdog by Michael Lemov, who called it "one of the most significant laws ever passed by the U.S. Congress" and says that "the Act explicitly incorporates a fundamental principle into American law . . . that the American people have a right to know the facts regarding the activities of their government."

Lemov is the Board President of the John E. Moss Foundation, named after the Democratic Congressman who -- at great cost to his standing in Congress -- was the prime sponsor and crusader for FOIA.  As Lemov details, Moss and his Democratic colleagues had to fight tooth and nail for years against the joint efforts of the executive branch and the Republican Party, which were vehemently opposed to FOIA (the same forces now jointly demanding Graham/Lieberman).  Indeed, they even had to overcome resistance from Johnson himself, who signed FOIA only because he was compelled to do so by Democratic leadership (though, ironically, Moss was able to attract a few GOP votes for FOIA as a result of the efforts of a young GOP Congressman from Illinois named Donald Rumsfeld).

Here is what Moss said on the House floor on June 20, 1966, when Congress finally passed FOIA (click to enlarge)

In his floor speech, Moss emphasized how broad are the secrecy powers FOIA vests in the President in the national security area:

Because FOIA already provides such broad secrecy powers, Moss emphasized that the most crucial aspect of FOIA is judicial review, so that it is courts which determine the legitimacy of secrecy decisions -- exactly that which Graham/Lieberman eliminates for suppression of the torture photos:

Moss also highlighted how fundamental it is to our system of government for citizens to obtain information about government acts that political officials want to keep concealed:

Finally -- and in a sign of how much our political culture has degraded -- Moss noted that the only reason FOIA passed was because the most powerful Democratic members of Congress, such as Chairman Dante Fascell, and virtually all leading American media organizations, worked together to defy the Executive branch and support FOIA.

In the wake of the secrecy abuses exposed by the Watergate scandal, the 1974 Democratic Congress approved expansions of FOIA, and when those were vetoed by President Ford, Congress quickly overrode the veto and enacted the expansions.  That is why Louise Slaughter says that, for the Democratic Party, FOIA is "as sacred as Social Security and Medicare."

This is what the White House, along with Joe Lieberman and Lindsey Graham, are now trying to dismantle for these photos -- based on the flimsiest and most contradictory reasoning and by appealing to the same exploitative fear-mongering tactics that governed the country for the last eight years, and that resulted in the dismantling of so many other long-standing, core principles of our political system.  As was often pointed out during the Bush era, the U.S. was able to Stay Safe while living under these laws for decades, even as it fought various real wars and the Cold War.  Abandoning these long-standing principles in the name of Terrorism -- or, worse, in the name of covering up war crimes -- is as counter-productive as it is dangerous.

UPDATE II: Greg Sargent has confirmed what Lindsey Graham claimed yesterday:  that Hillary Clinton is warning that release of these photos will endanger diplomatic personnel around the world.  For photos that don't depict anything new and are much milder than the Abu Ghraib photos, they sure do pack a big punch.  So far, their release will cause the mass slaughter of American troops, more Terrorist attacks on American cities, and the killing of American diplomatic personnel.  Is there any horror these photos won't spawn?  Meteor showers?  Asteroid attacks?  Incurable viruses?  Deadly hurricanes?

On a different -- and much more encouraging -- note, Jane Hamsher notes that Barney Frank is now demanding hearings on the Graham/Lieberman amendment in order to prevent quick, pressure-driven passage and to enable a sober consideration of the bill.  If there's really this much resolve among House Democratic leaders to block this amendment (and how much there really is remains to be seen), they should be able to substantially delay it, if not derail it altogether.

UPDATE III:  Greg Sargent is reporting that Nancy Pelosi will announce tonight on MSNBC that she formally opposes the Obama-backed Graham/Lieberman amendment.  Greg writes:  "'I don’t think Congress should make an exception to FOIA,' Pelosi will say, her spokesperson, Brendan Daly, confirms to me."  That's what being an independent legislator is all about.  That's now a significant chunk of the House Democratic leadership opposed to Obama on this issue and refusing to be pressured by the rank fear-mongering of Lindsey Graham and Joe Lieberman.  If they hold to their resolve -- and that's a big "if" -- they will deserve substantial credit.  When did Tom DeLay or Denny Hastert ever oppose Dick Cheney and George Bush when it came to national security or defending the prerogatives of Congress against usurpation by the Executive Branch?