The dark side of the moon

Sam Rockwell and Duncan Jones talk about their new space movie and the pleasures of 1970s science fiction films. 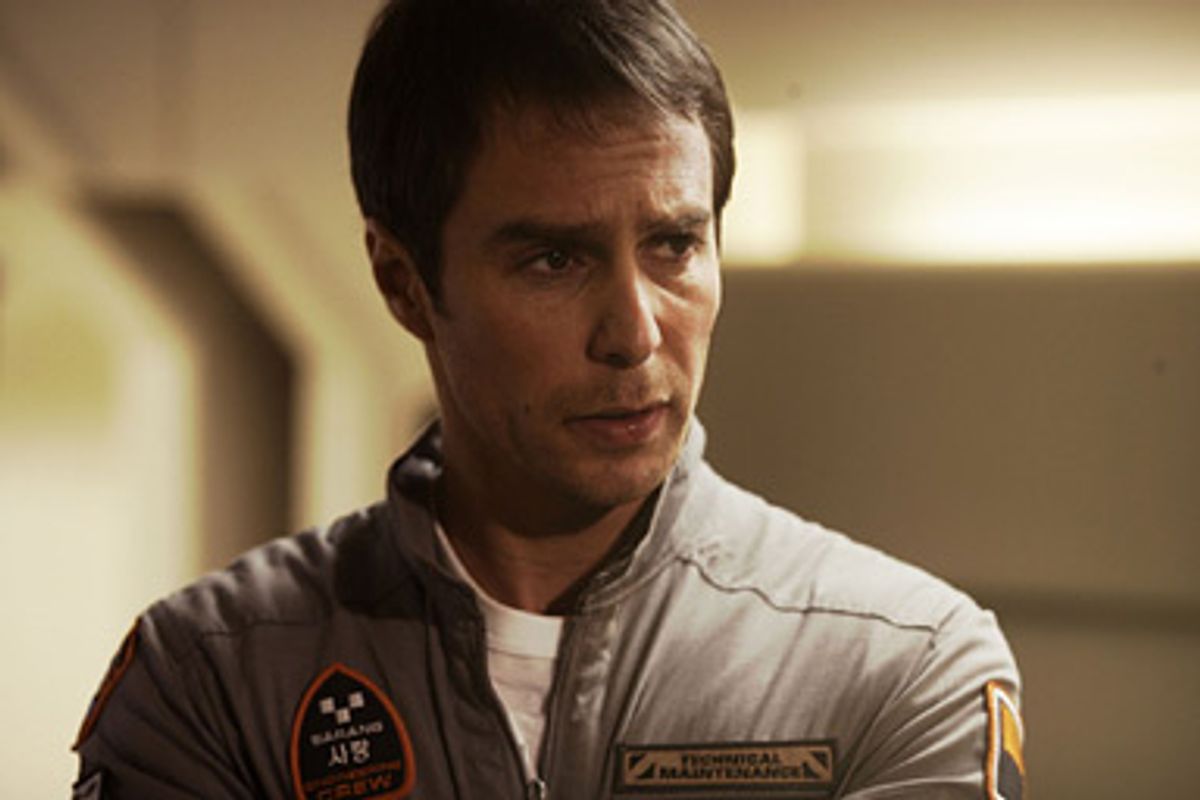 Today’s science fiction usually features big stars, big budgets and big explosions, but a small independent film with only one star has found a place in the summer release schedule. “Moon,” starring Sam Rockwell, is a quiet study in loneliness and isolation, revolving around the idea that an astronaut is just a working man stuck on the moon.

First-time director Duncan Jones (who happens to be the son of "Starman" David Bowie) says he wanted to make a movie like “Alien” or “Silent Running” — films he couldn’t get enough of when he was a kid. His vision for space is not the slick shiny world of the future, but a gritty industrial park. The spaceship is a messy lived-in space; worn out photographs are tacked to the wall, and the bed is unmade. This is where we find Sam Bell (Rockwell), a blue-collar mechanic who runs the space station and mines helium-3. He spends his days driving around the moon in a clunky vehicle gathering canisters of refined He-3 back to launch back to Earth. His only companion is an unsophisticated-looking robot named Gerty (voiced by Kevin Spacey). Despite the obvious HAL comparisons, we learn very early on that Gerty is devoid of human emotion, existing solely to serve Sam.

Sam’s three-year contract is up, and he is getting ready to go back to Earth, where his wife and young daughter live. But instead of going home, he begins to fall apart. When he is rescued by a newer version of himself — a clone — things really get strange. Suddenly there’s Sam 1, Sam 2 (a hotheaded version of Sam 1) and Gerty vying for space on the ship. It’s a good role for Rockwell, who plays off what he calls this “extraordinary circumstance” with humor and humility. He brings a realism to the relationship between the clones as they evolve from barely tolerating each other to forming a tender connection.

Salon talked to Jones and Rockwell in New York about making a science fiction movie that brings back the geeky thrill of seeing outer space for the first time.

Your choice to de-romanticize the astronaut really came across. I responded to this idea that he’s kind of a regular dude, like a car mechanic.

Duncan Jones: That was actually one of [Sam’s] initial ideas ... that we try and do a blue-collar character. I think the main reason for that was that the science fiction films we were both excited about growing up ... “Outland” and “Alien” — they really do have these blue-collar characters.

Sam Rockwell: I think a lot of times in horror movies or science fiction movies, they cast these very attractive people and they’re up in space. And I think movies like "Alien," they have these character actors like Harry Dean Stanton and Yaphet Kotto, and there was a kind of Cassavetes realism to it. The same thing with "John Carpenter’s the Thing” or “Silent Running” or “Outland,” there was this kind of blue-collar element to it, which I think pulls you in immediately to the reality, so when the monster arrives you go with it a little easier.

Talk about the two versions of Sam in the film.

SR: Well they’re really the same person — the only difference is the three years on the moon. The argument that we’re making is that your environment can change you. Three years on the moon by yourself is maybe the equivalent of three years in isolation in prison or a prison camp or something. It’s a little different — you get Ping-Pong and a robot, and you don’t get raped in the shower — but I think he goes a little Robinson Crusoe crazy. And I think he learns about himself up there. So he’s a humbler, sweeter, more sensitive man than his original self because that experience has changed him a little bit.

At first I thought they were going to try to kill each other, but that seemed too easy. They almost become brothers up there.

DJ: Absolutely. "Brothers" is a good way to put it. Even though they are clones, their experience has made them into two very separate characters. I think the genius of what Sam did is that he found what made those two guys different and then found ways to really bring the conflict in between the two of them. And we did it in a way where it wasn’t good guy, bad guy. It was just two guys who had different agendas and were in different stages in their lives. One was still kind of young and aggressive and angry, and the other one had spent a lot of time on his own and had come to understand what his own faults were and had tried to work on them.

DJ: Well, I did that on purpose. The film was written for Sam, but I kept the name Sam because it’s all about cloning and it’s all about the awkwardness of having to deal with yourself. And the most obvious way for me to make Sam go through that was to call the character Sam.

Can you talk about the technical aspects of filming "Moon"?

SR: The set was really amazing. It was kind of like you were on a space station. I mean the whole thing was closed off — the fourth wall was there, it was four walls, so it wasn’t like a set. It was kind of like going on location. We felt like we were in this little space station. It was in Shepperton [Studios] where they shot “Alien” and “Star Wars,” so there was this lineage there.

Duncan, your father is David Bowie, and I did go into this film thinking about “The Man Who Fell to Earth." Your film is quite a different take on space, but ... was there something going on in your house?

DJ: Why we’re all obsessed with not being on Earth? No, I’m a product of my upbringing, so I was surrounded by the things that interested my dad at the time, whether that’s films he was watching or music he was listening to or playing. I can’t avoid the fact that that had an effect on making me the person I am. That idea of experience making you who you are is very much what “Moon” is about. But no, I don’t know if we have a genetic disposition to making us want to talk about space. I think there’s something interesting about science fiction in general — that when you do a human story, and you put it in a science fiction setting, you actually see the person a lot more clearly because the environment is so alien. Anything subtle about the human being really stands out, and the thing that makes them human and the things that are natural about them really stick out in this alien environment, this unusual environment.

Why didn’t you show Earth in the film?

DJ: Initially it was budgetary, because we wanted to maintain all of our shoot within our soundstage, but as the film progressed, I got advice from other people. I have some friends who are writers, and they were saying, wow, you should show the epilogue, show what happens when he gets back. We started playing around with it and writing some scenes and talking about it. And we even shot a little segment, but as soon as we put it in the edit it seemed so wrong, because it immediately broke the intimacy of the film that we made. It really just felt bolted on to the end. It didn’t seem appropriate.

What were the challenges of working with the robot?

SR: Well I didn’t work with Kevin [Spacey], because he signed on after the movie was made. The script supervisor would read Gerty's lines.

That sounds challenging, since Gerty has a specific persona.

SR: I knew what the voice represented. I knew that we talked about the different relationships. The first clone, Sam 1, had been up there with Gerty for three years, so it had become his friend and a mother, and there was so much transference with that robot and the first clone. But the second clone is new to Gerty, and Gerty is new to him, so we talked about making that relationship more like a butler or a servant, so the second clone dismissed him and didn’t treat him as well.

Obviously, this film is sort of a throwback, but do you think it adds to the science fiction genre in any way?

DJ: I think it moves the genre today in a different direction. If it had come out in the late '70s or early '80s, hopefully it would have fit right in there with the films that were coming out. I think TV is almost ahead of film right now as far as science fiction goes. They’re telling much more interesting human stories than films have been up until now. But it does seem that there is a new wave of science fiction on the horizon of slightly smarter, more human-centric science fiction. Hopefully, we’re one of the first of this new wave of films.