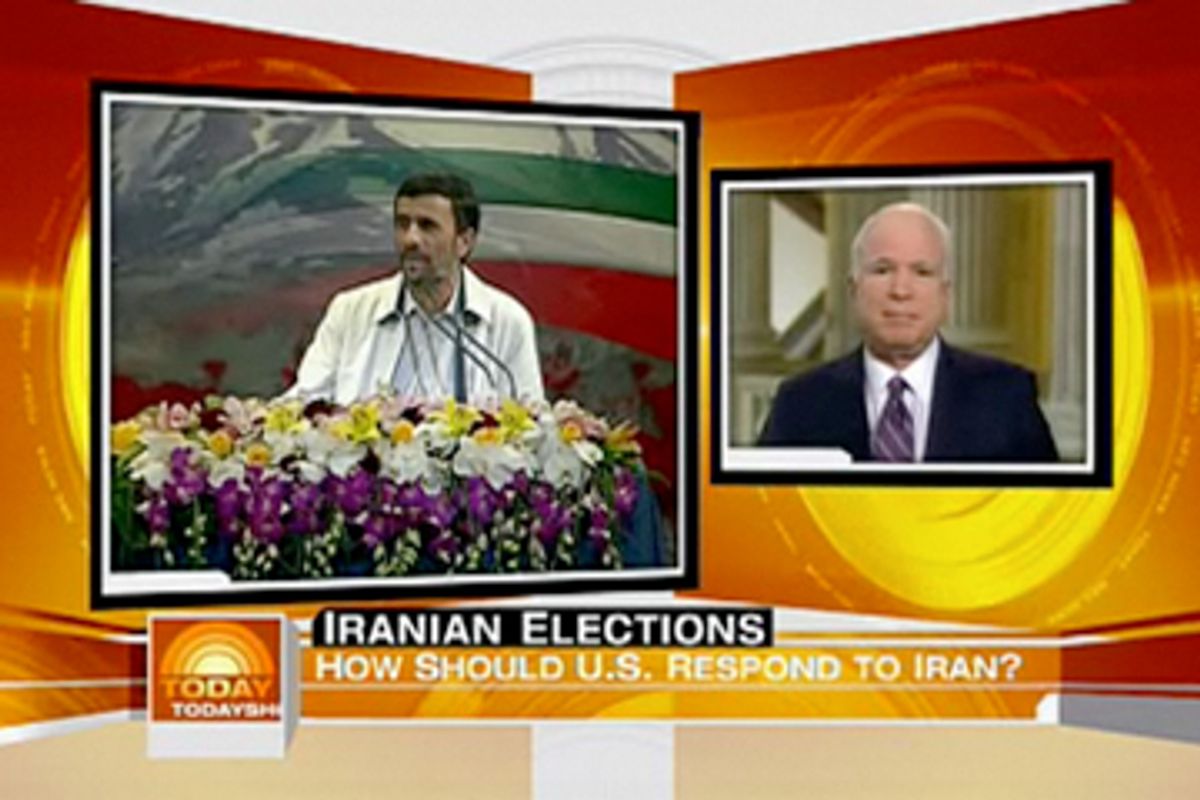 John McCain on the Today Show
--

The nation got a glimpse Tuesday morning of exactly what President John McCain would be up to if last November's election had gone differently.

"We lead," McCain told NBC's David Gregory on the "Today" show when asked about a different vote altogether -- the one in Iran on Friday. "We condemn the sham, corrupt election. We do what we have done throughout the Cold War and afterwards ... We speak out forcefully, and we make sure that the world knows that America leads."

A few days after the Iranian government started brutally repressing protests against the questionable reelection of President Mahmoud Ahmadinejad, the politics of the Middle East have started creeping into politics closer to home. While President Obama and his advisors try to navigate the American response to a situation that's changing faster than anyone can Twitter about it, Republicans have decided the time is right for blunter rhetoric than anything coming out of the White House. And they're not shy about saying so. Conservative Rep. Mike Pence, an Indiana Republican, introduced a House resolution calling the opposition in Iran "dissidents," and taking a firm side against the government. You may not be surprised to learn he quoted Ronald Reagan in remarks about the bill. Not to be outdone, House Republican leader John Boehner told CNN Obama had "a real opportunity ... to really make a strong statement and take a strong stand with regard to what the leadership over there is doing." "The people in Iran believe in democracy," he told Wolf Blitzer. "They believe in the rule of law, and they -- I think they believe that this election's been stolen."

That is what an increasing number of people in Iran believe. But it's not like Obama has been entirely silent. Unlike the European Union, which issued a terse statement Friday that seemed to recognize Ahmedinejad's reelection, the U.S. administration has shown some skepticism. Asked about Iran by reporters both Monday and Tuesday, the president has been trying to balance giving encouragement to opponents of President Ahmadinejad with not appearing to interfere in the internal affairs of the country that still calls the U.S. "the Great Satan."

Which is exactly the problem the White House finds itself in right now. It was only two weeks ago, after all, that Obama became the first U.S. president  to acknowledge that the CIA planned the 1953 coup that overthrew Iran's democratically elected Prime Minister Mohammed Mossadegh. U.S. intelligence agencies don't seem to have much information on the election, and there were no international monitors watching the vote who can substantiate the circumstantial evidence of fraud. Republicans may be agitating for a Reagan-esque, "Mr. Khamenei, tear this wall down" moment, but the actual administration -- and particularly the president, whose words carry more weight than whatever GOP members of Congress say -- isn't interested in letting Ahmadinejad and his allies turn the protests into an American plot.

"I don't think that there should be an American imprimatur on the opposition or on [opposition candidate Mir Hossein Mousavi]," said one Democratic foreign policy aide on Capitol Hill. "For [Obama] to come out in a more definitive way commenting on the election in a sovereign nation would have been inappropriate -- particularly given the history that we have with that country."

Obama did turn up the volume on Iran a tiny notch Tuesday, compared to what he said Monday. "When I see violence directed at peaceful protesters, when I see peaceful dissent being suppressed, wherever that takes place, it is of concern to me and it's of concern to the American people," he said. "That is not how governments should interact with their people." He went on to defend the right of Iran's opposition to protest without government paramilitaries shooting at them. "I stand strongly with the universal principle that people's voices should be heard and not suppressed," the president said. The day before, meanwhile, he had indicated only that the violence "troubled" him.

With reports of violence in Iran getting worse, that type of warning from Obama may, in fact, not be doing much to reassure -- or protect -- the people taking to the streets of Tehran. But the notion that Republicans are suddenly the defenders of progressive Persia is a little hard to swallow. Just two years ago, McCain was joking -- and singing -- about bombing the very cities where the protests are now erupting. The neoconservative foreign policy establishment -- the folks who brought you such successful hits as the war in Iraq -- have been urging aggressive military action against Iran for years.

Even without stronger words from Obama, events in Iran appear to be moving quickly, though it's hard to say from Washington what direction they're headed in. On Tuesday, the government offered, albeit possibly disingenuously, to recount some of the votes. Protests grew in various cities, and officials began barring foreign reporters from covering "unauthorized rallies" -- which is never a sign of a government confident that it has the support of its people. "This needs to be organic, and if the Iranian people desire greater liberties, it needs to flow organically from the Iranian people -- and it does not need to be America-sponsored," the foreign policy aide said. If the GOP really wants to use the situation in Iran to bash the White House, expect them to keep the pressure up for it to become exactly that -- an America-sponsored democracy movement. Just don't expect Obama to listen to them quite yet.