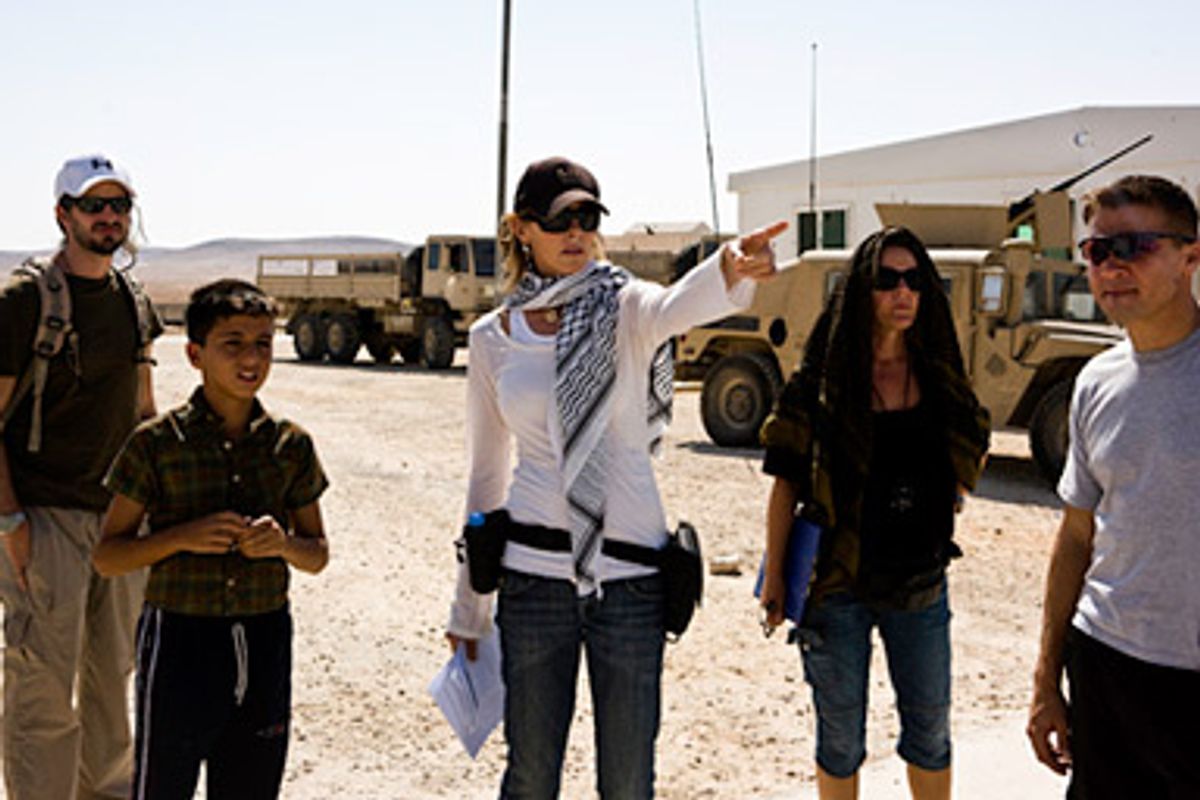 Listen to the interview with Kathryn Bigelow and Mark Boal

If she wanted to play the role, Kathryn Bigelow could easily present herself as Exhibit A of the enduring sexism of Hollywood. Beginning with her vampire cult-fave "Near Dark" in 1987 and then the 1991 surf-heist classic "Point Break," Bigelow has directed some of the most visually inventive and exciting films in recent action-cinema history. (Yes, I am willing and even eager to defend "Strange Days" and "K-19: The Widowmaker." Let's leave that for another time.) She has virtually no interest in the kinds of talky, intimate dramas the world expects female filmmakers to crank out (and her one, only partially successful attempt to move in that direction, "The Weight of Water" in 2000, suggests she shouldn't bother).

Bigelow has paid for her eccentricity. Early in her career, it was often assumed that she only had access to the industry because of her brief marriage to James Cameron, whom she hadn't even met when she made "Near Dark." She's had constant difficulty in raising money and getting projects launched, and has made just seven features across 22 years (along with music videos and episodes of "Wild Palms," "Homicide" and "Karen Sisco"). Throughout it all, she's never sounded bitter or come anywhere close to playing the victim. When I meet Bigelow and writer-producer Mark Boal in New York to talk about "The Hurt Locker," their riveting Baghdad bomb-squad drama (and Bigelow's first film in seven years), she's a friendly and relaxed conversationalist, clearly delighted with the movie's reception so far.

Listening to the interview again, I notice something I didn't notice in person. Bigelow's manner is warm and engaging, but the tall and striking 57-year-old also deflects personal questions, whether about gender, about her childhood, about the source of her obsession with hyper-masculine, danger-junkie situations. She talks easily about the specific situation captured in "The Hurt Locker," but reverts to formal, art-school language when discussing her career more generally.

That's no accident. Bigelow was trained as a painter in San Francisco and New York, and spent her 20s and early 30s on the avant-garde art scene. I think that's crucial to understanding her work. Bigelow approaches film as a kinetic multimedia mindfuck, in which the story advances through action rather than words, and dialogue is a subsidiary element. Critics who complain about the dialogue in Bigelow's films are missing the point of the whole experience; that's like judging Hustler by the quality of the prose, or judging a bottle of tequila by reading the label.

You can read Stephanie Zacharek's review of "The Hurt Locker," which follows 30 harrowing days in the life of a three-man U.S. Army bomb-disposal unit at the 2004 height of the Iraq conflict. Suffice it to say that the drug Bigelow dispenses is a drug I like, and that she's found a terrific collaborator in ace British cinematographer Barry Ackroyd.

Bigelow wanted writer-producer Boal (a former Salon contributor) on hand for our Manhattan interview because it was Boal's reporting, as a bomb-squad embed in Iraq, that got "The Hurt Locker" rolling. She already knew Boal, and admired his reporting. "I thought that would be a pretty extraordinary situation to transform into a film, and one that could produce interesting characters," Bigelow says. "Like most of the general public, I knew very little about a) what was going on over there, and b) that it was a war of bombs. In fact, the technicians of EOD -- Explosive Ordinance Disposal -- are at the heart of the war."

Boal describes his time embedded with the bomb squad as involving "many, many moments of real terror. I get scared easily, but that was really scary." In case you're wondering, Boal says the title refers to military and sports slang meaning a bad and painful place. EOD soldiers use it as a form of poetic understatement: If an improvised explosive device, or IED, goes off while you're trying to disarm it, the "hurt locker" is likely to mean a white box draped in a flag and shipped home with full military honors.

While the film's opposing characters, Staff Sgt. James (Jeremy Renner), the freewheeling cowboy type, and his by-the-book partner Sgt. Sanborn (Anthony Mackie), are composite figures, Boal adds, "I think the film is pretty faithful to the situations that the soldiers in the bomb squad were going through at that time. Obviously the war changes all the time, but in 2004 a three-man Army bomb squad sometimes had to deal with 10 or 12 or 15 IEDs within a 24-hour period. They were constantly busy and constantly in life-or-death situations. We're trying to examine the psychology and mind-set of somebody who has to get up in the morning, have a cup of coffee, go off and face this life-or-death situation, and then do it all over again the next day."

Bigelow and Boal both insist they weren't deterred by the dismal box-office failure of virtually every Iraq-related dramatic film, and it's possible that with American forces preparing to withdraw, audiences may be willing to engage with a film that tries to paint an experiential portrait. "This story is more reportorial than anything else, in terms of the takeaway," Boal says, "and it's been gratifying to see people recognize that. There's always a tendency to take a movie like this and put it in a box, in terms of whatever partisan politics you might come in with. We wanted to stay away from policy and partisanship, and give people the opportunity to see what life is like over there. Arguably that's a political act, depending on what you mean by that word."

Bigelow says she never thought about potential audience apathy. "I was just interested in these characters and the script, bringing it to life and being as authentic and realistic as possible. I wanted to give the audience a you-are-there, boots-on-the-ground look at a day in the life of a bomb technician, which is an inherently dramatic situation. I saw it as an opportunity to humanize these men, and to humanize what it would be like to walk toward something that the rest of the world's population would run away from."

Bigelow shot the film in Amman, Jordan (which has similar terrain and architecture to Baghdad), on a tight schedule, with a relatively low budget and under unforgiving conditions. "The suit that Jeremy Renner's character wears is a real bomb suit," she says with evident delight. "It's not something created by our wardrobe department. It's got built-in steel plates to protect its wearer from explosions, and depending on how much of it we were shooting, it weighs between 80 and 100 pounds. Add to that a helmet, add to that the Middle Eastern summer sun and daytime temperatures that averaged around 115 degrees. My biggest challenge on set was keeping Jeremy --" here she searches for the right words "-- comfortable and hydrated."

"And alive," quips Boal. "We really, really wanted him to finish the movie. That was an important part of it."

When I ask Bigelow what draws her to these high-risk, high-testosterone characters and situations, she answers in general terms. "What attracted me to this film was the individual and the psychology that would be attracted to this profession. Given that you're looking at the protocol of bomb disarmament, it's inherently dramatic. The time spent trying to decide how to disarm a particular IED is extremely tense. In each passing second, anything could happen. These are men who make life-or-death decisions under extreme pressure, pressure that's unimaginable to you and me. I think, or I hope, that imbues each frame with tension."

I press her just a little more -- OK, but are you working out something vicarious in these stories? Were you one of those girls who played with GI Joe? -- and again she backs away from personal terrain. "I tend to choose subjects fairly instinctively," she says, "but on the other hand I do like to examine all the potentialities of the medium. I think that peak experience can give you the opportunity for experiential camerawork, for an experiential cinema. It can allow you to put the audience there, so they feel an immediate and visceral response to whatever's going on on the screen. That does draw me in, that opportunity."

Boal interjects: "In real life, she's very boring. She knits, she makes quilts. She plants daffodils." I do not believe this is true.

Bigelow says her visual-art background was a "great benefit" when she turned to filmmaking in her 30s. "I think it gave me an ability to block and frame and shoot and compose, an understanding of two-dimensional and three-dimensional composition. It gave me an eye. All of that comes naturally to some degree, after having spent so much time in that venue, and I can focus on story and character, which is where my real interest lies."

Bigelow has always been the master of an action film's internal rhythm; she knows when to ratchet up the pace, and when to give the audience at least a minimal break. There aren't a hell of a lot of breaks in "The Hurt Locker." In between the harrowing bomb-disposal and desert-battle sequences -- Ralph Fiennes and Guy Pearce show up briefly, as British soldiers pinned down by sniper fire -- James and Sanborn spend their off-hours boozing heavily and beating the living crap out of each other.

"You know, as reported by Mark, there was no opportunity for refuge in that place and time," Bigelow says. "There was no break, it's 24/7. Even the Green Zone is a potential recipient of mortar rounds. There's no timeout. You do 365 days and then you leave."

We talk some about the similarities between this film and Stanley Kubrick's "Full Metal Jacket," another story of claustrophobic urban warfare. "In that war what they had was Saigon, so there was a rear," Boal says. "Soldiers had times when they were in combat, and times they were out of combat. In Afghanistan and Iraq, for a long time there was no place you could go and say, 'I'm out of the war.' The movie tries to capture that permanent tension and suspense."

That tension and suspense can itself become addictive, and Boal says that while his characters are fictional, the idea that they can become hooked on the high-stakes danger of their situation is not. "It's a pretty interesting group of people. You're talking about guys who not only volunteered for the military, which says something in itself, but who volunteered for this super high-risk job. It's a group of people who like evil situations. That's the path they have chosen. Sometimes they can pay a high price for their attraction to risk. It's not unique to the bomb squad. I imagine if you looked at vice detectives in New York City, or firefighters or race-car drivers or war correspondents, you might find the same thing."

Some critics, I tell Bigelow, have seen James and Sanborn, the dueling pair in "The Hurt Locker," as updated versions of the Keanu Reeves and Patrick Swayze characters in "Point Break." It's my last best effort to extract an aesthetic confession from her. She smiles graciously and throws me a bone. "Unusual and provocative characters in peak experiences allow me to test the elasticity of the medium," she says, "and try to find where the thresholds are, or create new ones. That's approaching it from a more formalistic side. For me, this story is about unpacking the psychology of guys who do this job. That's what drew me in, and that's where this film lives."

"The Hurt Locker" is now playing in New York and Los Angeles, with wider national release to follow.