Could an Iraq war movie actually be good? Kathryn Bigelow's unsettling film is more than explosions and gore 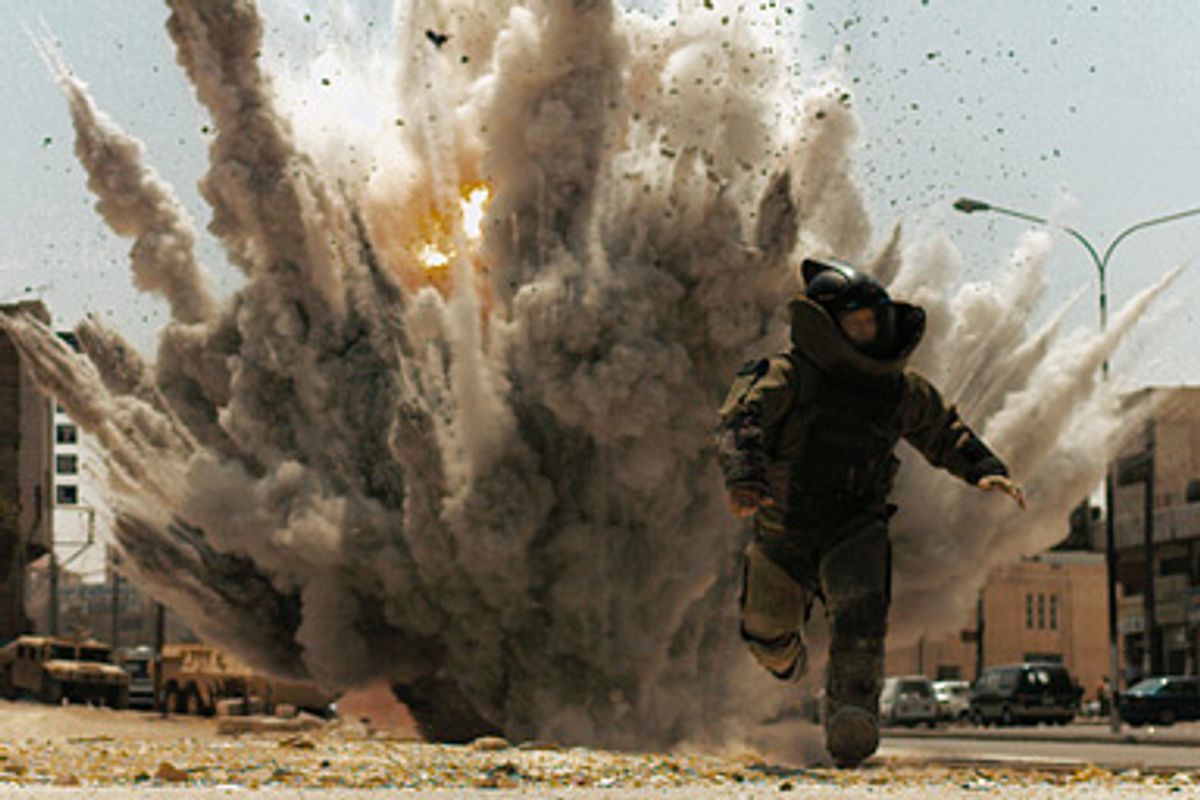 What's most striking about Kathryn Bigelow's "The Hurt Locker" isn't its action sequences -- which are low-key to begin with -- but its tense quietness: This is a war movie that rarely goes "boom," a salient choice considering that its central character is an explosives expert. Then again, perhaps the true subject of Bigelow's movie isn't war but human stress: After a particularly tough day the movie's three central characters, bomb-squad specialists, go back to base and commence drinking and roughhousing and wrestling, seeing who can take the hardest punch. This is how they shake off the day's anxieties, pushing themselves past the point of exhaustion, and consciousness, so they can finally rest. They handle the emotional strain of their work not by breaking down but by getting tougher, a strategy that can only carry them so long. Yet "The Hurt Locker" isn't about reaching the breaking point. It's about the long, slow buildup to that potential breaking point, the reality that when you've experienced war firsthand, one of the things that comes home with you is the possibility of madness. Maybe that's what makes the movie's quietness so unsettling.

"The Hurt Locker," set in 2004 Baghdad, follows three members of the Army's Explosive Ordnance Disposal squad, men specially trained to dismantle IEDs (improvised explosive devices), through the last 38 days of their tour. Staff Sgt. William James (Jeremy Renner) is a newcomer to the team, though he's not new to this line of work. (We later see that he keeps souvenirs of every explosive he's dismantled in a box beneath his bed, each one a little piece of some mechanism, made by the hands of another human being, that could have killed him.) The other two team members, Sgt. J.T. Sanborn (Anthony Mackie) and Spc. Owen Eldridge (Brian Geraghty), still reeling from the loss of their previous team leader (played by Guy Pearce), are having trouble accepting him: They see him as a reckless cowboy, and they're not wrong. As James approaches a particularly tricky device, he tosses aside his giant protective helmet, a bulky thing that bears a resemblance to old-time diver's headgear. His partners, covering him from a distance, watch in disbelief. Sanborn, via radio, asks him what the hell he's doing. He tells them, with James Dean-style insouciance, that if he's going to die, he's at least going to be comfortable.

James' approach generally works. His swagger is his armor, the thing that gets him through the day -- gets him through most days -- without suffering or causing much harm. And getting inside his head and those of his buddies is what Bigelow is after. Bigelow, working from a script by Mark Boal, a journalist who spent time embedded with a bomb unit in Iraq, works just a small corner of the wartime experience instead of attempting the futile task of making grand statements about the whole, and to a point, her approach works well. "The Hurt Locker" stands as a collection of well-executed set pieces, many of them involving James' dismantling of various devices: Even though he's essentially doing the same thing every time (looking for and following the right wire), Bigelow shoots these sequences in a way that differentiates one event from the next. She captures the extremely mundane nature of the team's job, without losing sight of the fact that one sudden, ill-chosen movement could kill them.

The drawback is that even though "The Hurt Locker" is extremely effective in places, it ultimately feels unformed and somewhat unfinished. It's to Bigelow's credit that she doesn't make any final, grand pronouncements, but the picture could use more dramatic shaping, and Bigelow might have allowed just a few cracks in her cool reserve. It's inevitable that "The Hurt Locker" will be compared to Brian De Palma's "Redacted," another picture about soldiers' experience in Iraq, but it doesn't have that movie's raw anguish or sense of outrage. Bigelow and her director of photography, Barry Ackroyd, also make extensive use of hand-held cameras, as almost everyone in the film industry does these days. They seem to have bought into the fallacy that a jiggly frame enhances the immediacy of a scene, but I wonder if a more classical approach wouldn't have worked better: Stillness is far more suspenseful, and more unnerving, than constant jitteriness. Bigelow also lifts a scene, a bit shamelessly, from Paul Mazursky's "Moscow on the Hudson," in which Russian defector Robin Williams finds himself overwhelmed by choice in an American supermarket; she might have found another way to make her point about the glut of creature comforts American life has to offer.

But Bigelow does have a grasp of technique that many younger mainstream filmmakers haven't bothered to learn. Over the years, Bigelow has sometimes been guilty of working too hard to out-macho the guys (particularly with movies like "Blue Steel"), though she's also made a few terrific and distinctive pictures, like the raggedly poetic vampire story "Near Dark." In "The Hurt Locker," she lets the guys do all the swaggering, and the approach works. What's more, in any sequence involving gunfire, she makes sure you always know where one character is in relationship to another. It's crazy that we've reached the point where we praise filmmakers for honoring the basics of good filmmaking, but in an age in which few filmmakers bother to shoot action sequences clearly, Bigelow stands out as an exception.

And in the end, Bigelow's point of view is what's most interesting about "The Hurt Locker." The picture's strength lies in the details she focuses on. Some of them are small ones -- skinny cats trotting purposefully down dusty Baghdad streets, or a herd of goats shambling dangerously near a device that's about to be detonated -- that show the way everyday life goes on even in a war zone. But many of Bigelow's choices go even deeper: James, parched after a long, extremely tense stakeout in the sun -- a group of snipers have had him and his team trapped in a single location for hours -- asks Eldridge to locate some juice, if he can. When James, dazed and stressed out, gets the juice pack in hand, he fumbles to unwrap the little straw -- even as he's risking his life to do men's work, he's suffering the momentary clumsiness of a little kid. And when he finally manages to get the damn thing ready to drink, he hands it, without touching it himself, to Sanborn, who hasn't said a word about being thirsty but who's clearly just as dehydrated as James is. It's a way of getting at the essence of leadership without using anything so mundane as language.

Similarly, "The Hurt Locker" conveys the distrust between Iraqis and Americans with gestures and carefully chosen shots instead of words. (The wary friendship James strikes up with a brash Iraqi kid who peddles DVDs on the street has a particularly piercing coda.) Taxicab drivers, butchers and housewives may innocently try to go about their daily business, but the soldiers can't trust in their innocence. The uneasiness between the invaders and the invaded is an uncomfortable but natural state -- Bigelow and Boal don't try to force any facile political resolutions. Bigelow also coaxes understated performances from her actors: Pearce and Ralph Fiennes both give terrific, compact performances in very small roles. Renner is sometimes a bit too low-key -- he's going for subtlety, and often he's just difficult to read. But he, Mackie and Geraghty succeed in mapping the rocky territory of their relationship: Mackie's Sanborn, with his background in intelligence work, at first tries to put the "cracker" James in his place; the shy, shambling Eldridge, as he's played by Geraghty, is the most openly fearful of the three, though he ultimately copes with his anger in a way that might actually be healthy.

And while we're all supposed to tread carefully around the land mines of gender generalizations, there's no escaping the fact that "The Hurt Locker" is a war movie made by a woman. Even though women fight wars too -- more so today than ever before -- Bigelow happens to be focusing on three men here, and if their sense of honor and duty aren't exclusively male traits, Bigelow accepts that their machismo plays a role in how they go about their job, and in how they survive it. She's sympathetic toward her characters without coddling them or infantilizing them. Bigelow is an outsider looking in and she knows it, but that status also allows her some freedom. The guys in "The Hurt Locker" are human beings first and men second. The point, maybe, is that you don't have to have a dick to understand what they're going through.