The president welcomes 300 prominent gays to the White House. But when will his rhetoric translate into action? 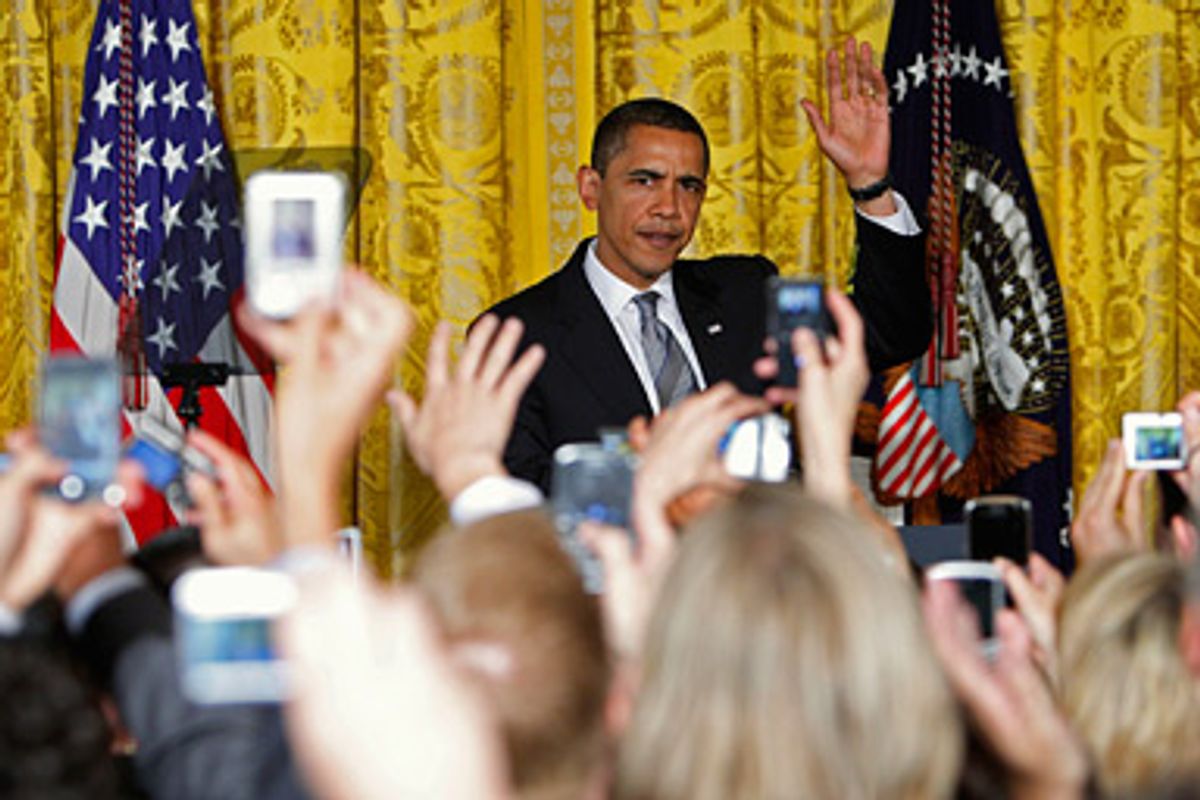 U.S. President Barack Obama waves to the crowd as he arrives to address a reception for the LGBT Pride (Gay and Lesbian Pride) Month in the East Room at the White House in Washington June 29, 2009.
--

The last time the president of the United States marked gay pride month with anything official at the White House, it was June 2006. George W. Bush decided to throw the weight of his office behind a proposal to amend the Constitution to ban gay marriage. After all, the fate of Western civilization hung in the balance. "Our policies should aim to strengthen families, not undermine them," Bush said at the time. "And changing the definition of marriage would undermine the family structure."

On Monday, 40 years and a day after the Stonewall riots began to bring the gay rights movement into the mainstream, Barack Obama took a slightly different tack. The administration brought nearly 300 gay, lesbian, bisexual and transgendered guests -- and, in some cases, their partners or children -- to the East Room for an open bar and some hors d'ouevres. "Welcome to your White House," the president said. "We have made progress and we will make more. And I want you to know that I expect and hope to be judged not by words, not by promises I've made, but by the promises that my administration keeps. We've been in office six months now. I suspect that by the time this administration is over, I think you guys will have pretty good feelings about the Obama administration."

Of course, part of the reason he hosted the event at all is that it was starting to become clear that the gay and lesbian community may not have had such good feelings about the Obama administration so far. After winning broad support from gay voters last year, Obama had promised to push Congress to overturn the so-called Defense of Marriage Act, which makes it possible for states to refuse to recognize gay marriages performed in the increasing number of places that allow them. He'd sworn he would end the Pentagon's "don't ask, don't tell" policy, which has forced more than 13,000 people out of the military since 1993. But he followed up by inviting the Rev. Rick Warren -- a prominent supporter of California's ban on gay marriage -- to speak at his inauguration. And then his Justice Department filed a brief defending the DOMA, using language that some activists read as lumping homosexuality in with incest and child marriage (though that point has also been disputed). By Monday, Obama had some damage to repair.

"I know that many in this room don't believe that progress has come fast enough, and I understand that," he said. "It's not for me to tell you to be patient, any more than it was for others to counsel patience to African-Americans who were petitioning for equal rights a half century ago."

That may have helped buy him some, well, patience. "He acknowledged the sense of frustration and disappointment and disillusionment that many in our community have been expressing -- very justifiably so," said Kate Kendell, executive director of the National Center for Lesbian Rights, who attended the event with her 13-year-old son. By making clear he knew he had disappointed many supporters, Obama won a chance to persuade them that he'd follow through with action. The administration has also been more open to hearing from gay and lesbian activists in recent weeks, Kendell said. "He acknowledged without condescension, without defensiveness, the fact that there was a sense that we had expected and been hoping for more ... I do believe, and feel comforted, that part of his value system includes full equality for LGBT Americans."

Like every event it puts on, the White House carefully managed the stagecraft at the LGBT reception. Invitations went out about a week ago, shortly after aides began to realize the grumbling among gay activists was teetering on the edge of becoming a real political problem -- the reception was the second move to ease concerns, after an order Obama issued two weeks ago to give some domestic-partner benefits to some gay and lesbian employees of some federal agencies. Media access to the event was limited; a small group of reporters and a camera crew were allowed in, but officials directed attendees to leave through the White House's East Wing, which meant there was little danger they would wander past the press workspace attached to the West Wing on the other side of the building. Perhaps as a result, the media's interest was also limited -- cable networks didn't bother carrying Obama's full remarks live.

Still, Obama struck a sympathetic tone, frequently comparing the struggle for gay rights to the 1960s civil rights era. Before the reception, the president met privately with two men who were part of the Stonewall protests, and he mentioned them several times in his remarks. "When these folks protested at Stonewall 40 years ago, no one could have imagined that you -- or, for that matter, I -- would be standing here today," he said. "So we are all witnesses to monumental changes in this country. That should give us hope, but we cannot rest."

Whether that rhetoric translates into any meaningful change soon, of course, remains to be seen. Obama said he'd asked Pentagon officials to begin planning for how to end "don't ask, don't tell," but 77 House members have already asked him to eliminate the policy faster. Likewise, there's been no real movement on overturning DOMA, even though Obama says he wants it repealed.

And while those who were at the reception seemed mollified, other critics were still blasting away. The Servicemen's Legal Defense Network, which represents gay and lesbian troops, held a protest outside the White House over the weekend to urge faster action on "don't ask, don't tell." "We keep hearing that the noble people who are going on Monday are planning to talk about issues and really let the White House know we've got problems," wrote Joe Sudbay on AmericaBlog. "That's BS. Many of them had a chance two weeks ago in the Oval Office to tell the president what they thought, and how many of those groups let him have it?"

Still, the message Obama was trying to convey -- relax, I'm with you -- seemed to sink in. "He's been in office six months, and in six months, not much has happened to help us," said Jerry Hoose, one of the two Stonewall veterans who met Obama privately before the meeting, and a founder of the Gay Liberation Front in New York not long after Stonewall. "But again, six months. I mean, what do you expect? The man is president, not a miracle worker." If nothing has changed a few years from now, keeping gay and lesbian supporters in Obama's corner may indeed take a political miracle. For now, though, the White House is hoping some kind words will do.