Californians are sinking themselves

An inflexible right wing is allowing the Golden State to drown in debt. But it's not alone 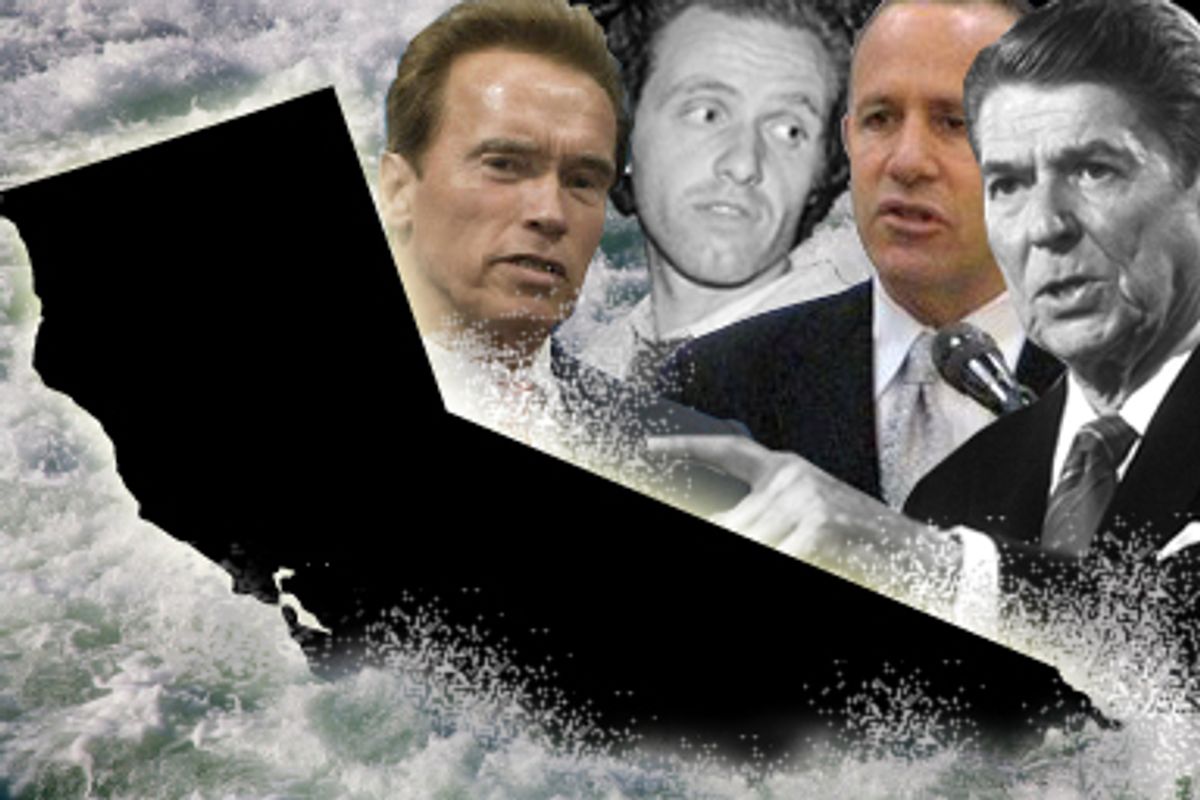 The world's eighth-largest economy has just gone belly-up. When midnight tolled on Tuesday night with legislators and Gov. Arnold Schwarzenegger still deadlocked over how to resolve the state's staggering $24 billion budget shortfall, California became unable to pay its bills. The state will have to begin issuing IOUs to its creditors as early as Thursday. It is the worst budget crisis in the state's modern history.

There is an unreal, almost dreamlike quality about this moment. Dreadful things are about to happen: Hundreds of thousands of children will lose their healthcare. Five thousand state workers will be laid off. Massive cuts will decimate education at every level. Social services will be slashed. Two hundred and twenty-nine parks, out of a total of 280, will be shut down. Even some of the state's landmarks may go on the auction block to raise money.

Yet as their state prepares to go over the cliff, California's citizens seem weirdly oblivious, or resigned, or numb. Like inhabitants of a corrupt third-world country who have utterly lost faith in their government and in politics itself, or ostriches sticking their heads in the sand, Californians are behaving as if the whole thing is out of their control. Or even that it isn't happening at all.

Californians are not directly responsible for the state's budget debacle. They are not the legislators who are so ideologically polarized that on Tuesday they could not even agree on an emergency partial budget fix that would have saved the state $5 billion. But in a larger sense, Californians are indeed responsible for today's crisis. The cumulative weight of their decisions, over decades, and their inability to reach consensus on the fundamental issue of what government should do and who should pay for it, are squarely responsible for the historic mess this unruly nation-state finds itself in today.

It is a truism that California is a national bellwether. From John Muir's founding of the Sierra Club to Prop. 13, the 1978 tax revolt, from Mario Savio to Ronald Reagan, from Hollywood to Silicon Valley, California has time and again proven itself to be a national and global trendsetter. The least American of places, a piratical exception to East Coast gentility on the far end of the continent, it is also the most American of places, with its brilliant, selfish and wanton extremities mirroring the oldest and still-unresolved contradictions of the American spirit. As Kevin Starr, dean of California historians, writes in his superb 2003 book, "California: A History," California has "long since become one of the prisms through which the American people, for better or worse, could glimpse their future." And right now, what they see isn't pretty.

The immediate source of California's financial problems is a lethal combination of ideology and rules. It is deeply politically divided, and its governmental mechanisms are completely broken. Bay Area leftists stare at Orange County conservatives across an unbridgeable abyss; a large and potent group of anti-government libertarians faces off against an equally powerful group of pro-tax, proactive government liberals. If California, like most states, required only a simple majority to pass its budget, the disagreements between these camps could be worked out; after all, the Democrats control the Legislature. But California requires a two-thirds majority, which gives the GOP, now dominated by anti-government, anti-tax ideologues, veto power over the process. The result is deadlock.

Compounding this problem is California's notorious initiative process, which allows voters to bypass the Legislature and place initiatives directly on the ballot simply by gathering enough signatures. The initiative process was originally passed by voters in 1911 to circumvent the power of the oligarchic railroad trusts by restoring direct democracy. And it still offers citizens a chance to take control of important issues. But it has gone out of control, abused by powerful interests who hire people to collect signatures and ram through bills that no ordinary citizen can be expected to comprehend. By sidelining elected officials, it achieves the worst of both worlds: It gives ordinary citizens, who lack requisite expertise, institutional memory and accountability, too much power, and then forces legislators to clean up their mess -- except that because of ideological gridlock and the supermajority requirement, they can't.

A classic example is the 1994 "three strikes" initiative, which mandated harsh prison sentences for repeat offenders. The bill was cathartic for citizens who wanted to get tough on crime, but it had serious budgetary consequences. As a result of the initiative and other tough crime laws, California's prison population has increased 82 percent over the last 20 years. State institutions now house a mind-boggling 170,000 prisoners. Corrections costs California $13 billion a year -- a fivefold increase since 1994, and more than the state spends on higher education. Former Gov. Gray Davis gave the powerful prison guards union a 30 percent pay raise from 2003 to 2008.

But the most momentous initiative was Prop. 13, which slashed property taxes. By voting for Prop. 13, while not demanding a reduction in public services, Californians were in effect saying they wanted to have it all: low taxes and social services, subsidized public education, infrastructure and the other things provided by government.

This was, in effect, a mass outbreak of cognitive dissonance, an up-yours delivered to government with the public's left hand, while its right hand reached out for Sacramento's largesse. Now, 31 years later, the bill has finally come due. There is no free lunch. If you want good roads, parks, decent schools (California's schools, once the best in the nation, are now among the worst) and adequate social services, you have to pay for them.

For some reason, Californians have never come to grips with this fact. Some citizens who voted for Prop. 13 and other anti-tax measures are hard-line right-wingers who are ideologically opposed to government and don't care if state programs die. They are the soul mates of the current Republicans in the Legislature, who see the current crisis as a golden opportunity to get rid of government programs they have opposed for years. But they are the minority. Polls show that most Californians are more centrist. They are not absolutely opposed to taxes or government programs. They want compromises that work. The tragedy of California is that its political system no longer speaks for them. The center has not held. It no longer exists. It is a self-reinforcing problem: The more the public perceives politicians as ineffectual, the more it dismisses politics altogether.

As historian Starr points out in his new book, "Golden Dreams: California in an Age of Abundance, 1950-1963,"

this was not always the case. During what now looks like a Golden Age, moderate Republicans and Democrats worked together to get things done. Republican Govs. Goodwin Knight and Earl Warren and Democratic Gov. Pat Brown were masters of the art of the possible, reaching across the aisle to hammer out effective legislation. Even Reagan was more pragmatic than later GOP myth-makers claim. As governor, Reagan pushed through the largest tax increase in the state's history to pay for government services. It was during these years, Starr points out, that the infrastructure that allowed California to grow was built -- an infrastructure Californians are still living off today.

What happened? Why did the center fail? Why has California, a place famous for giving birth to cutting-edge ideas that changed the world, proved humiliatingly unable to manage its own affairs? Why can't California do politics as well as it does technology, biotech, movies, music and social justice movements?

Beyond the state's dysfunctional system, the short answer is the rise of the hard-right GOP. Pushed far to the right by ideologues like Newt Gingrich, Tom DeLay, Grover Norquist and their ilk, California Republican lawmakers have staked out an absolutist line against taxes that makes governance nearly impossible. Lawmakers who believe and act on Reagan's famous line that "government is not the solution to our problems, government is the problem," are walking oxymorons. Why expect anti-government Republican legislators to resolve a budget crisis when that crisis will result in their goal: the destruction of government? The floundering Governator may not be an extremist, but he remains in thrall to the members of his party who are.

But Californians themselves, of all political stripes -- or, more likely and significantly, none -- also are responsible. The fact remains that self-centered California has yet to come to terms with what it is. This is a state that was built with government programs, financed by massive federal military and aerospace spending and state funding of local projects, and yet still has not decided what it thinks about the New Deal, or government itself. Of course, those opposed to government tend to be on the right. But the fact that many leftists, chasing the chimera of perfection, disdain the world of practical politics is also damaging.

Will California be able to pull itself out of its current hole? Certainly it has done so in the past. Its history is nothing if not a tale of reversals and unexpected triumphs. It will no doubt muddle through. But in the long run, to overcome its structural problems, it must transform some of its most cherished values. Without abandoning its individualism, utopianism and radicalism, it must learn how to use them in the world -- with all the compromises that requires. Like an aging starlet, the Golden State is clinging desperately to its glorious youth. But it is past time for it to grow up.