"Juno" scribe and "Transformers" hottie together at last, in dueling trailers for demon-cheerleader flick 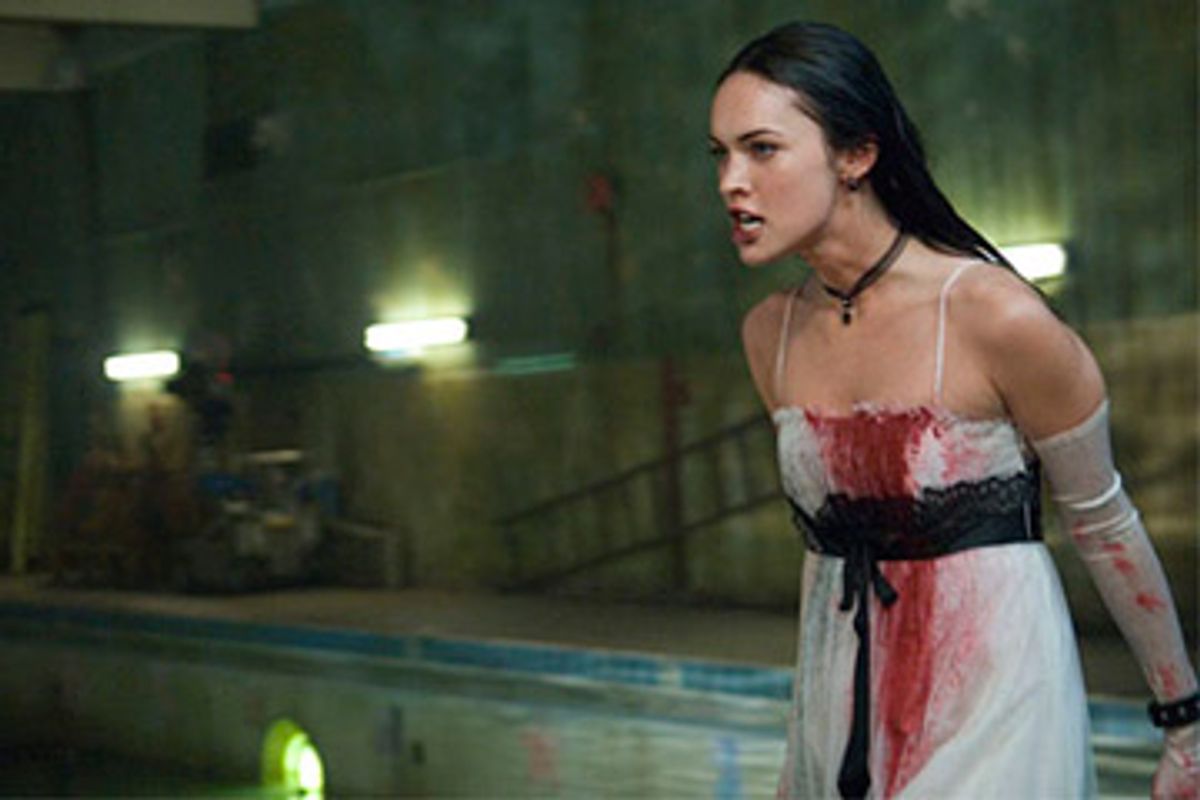 During my largely vain efforts to escape the totalitarian cultural hegemony of That Lady and That Dead Guy -- I haven't yet seen a video of Sarah Palin moonwalking or the "Thriller" video mashed up with her campaign appearances, but that's only because I haven't looked -- I have found the perfect antidote, a long, cool drink of Stygian pop-culture brew that will drive Jacko and Hockey Mom from your consciousness. Admittedly, the name Diablo Cody fills me with a mixture of admiration, exasperation and terror, and the only thing I know about Megan Fox is that she represents the hot apogee of hottie hotness in a movie I will never see. Yet their potent and perverse union in the upcoming teen-horror vehicle "Jennifer's Body" (set for September release) fills me with enormous yearning.

There's been a lot of totally uninformed Internet back-and-forth about whether director Karyn Kusama -- formerly an up-and-coming talent who seemed to flame out after "Æon Flux" in 2005 -- and producer Jason Reitman (who directed "Juno") would somehow render Cody's script cheesy and trashy. I'm sorry, but those are dumb complaints. If anything, Cody could use some cheesy and trashy. And anyway, this is a movie about a demon-inhabited cheerleader who kills boys! It is not Chekhov, and it is not "Let the Right One In," excellent as that was. It is self-evidently a movie that's trying to claim a place in a cheesy, trashy American teen-movie idiom; trying to make it into some kind of brooding and dark auteurist vision would be a dire categorical mistake.

Thanks to Variety super-blogger Anne Thompson, we now know that Fox will be running a "Jennifer's Body" trailer before "Brüno" when the latter film opens wide this weekend, but also that the filmmakers aren't entirely happy with it. There's a different trailer -- a racier, fully NSFW, "red-band" version -- available at Shock Till You Drop, which comes with the following note, signed by "Karyn, Diablo and Jason":

Fox is putting a trailer of "Jennifer's Body" in front of "Brüno" this Friday. Great, right? Only problem is it's not our trailer. It's kind of a straight horror preview and while we're sure it'll appeal to many of you, we wanted to make sure you guys got to see our cut ... Let's call it the "filmmaker's cut." We think it captures the comedy and scares of the horror films we grew up on -- a kind of nostalgia for when horror films were fun. Can't wait to show you the whole film ... In the meantime, here's the red-band trailer we wanted our fans to see.

OK, yes, this has the faint ring of a marketing gambit. It's so hard to tell actual sincerity from the performance of sincerity these days, isn't it? Is there still a difference? I didn't think so. But, anyway, if the movie's going to be anywhere near as deliciously, sleazily awesome as this trailer, I don't care. Being forced into a generic container might be the best thing that could happen to Cody's overly precious writing. As my college poetry teacher used to say, it's always easier to write good sonnets than good free verse -- and this particular sonnet has a naked high-school demon-cheerleader in it. My prescription for JackoPaloPalooza overload: Watch it twice and discuss among yourselves.