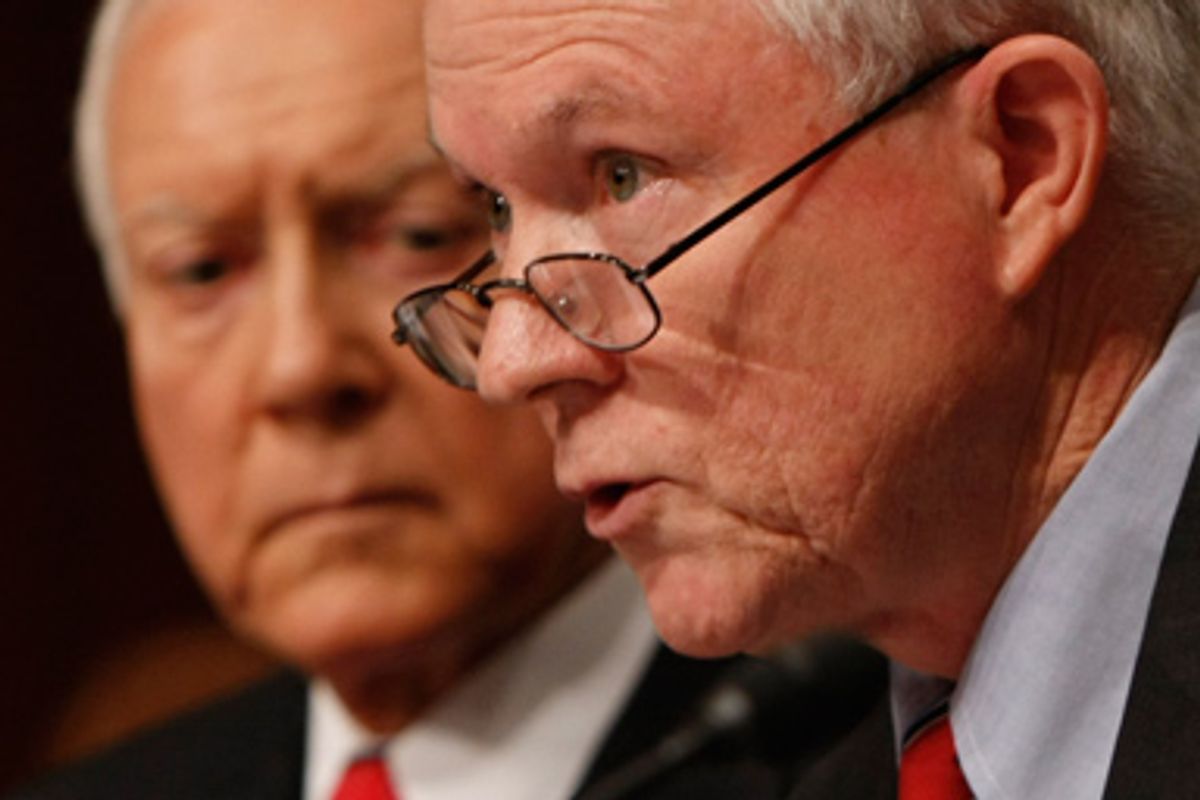 The theory that Sessions and his fellow Republicans appear to be working under when it comes to Sonia Sotomayor, President Obama's pick for the Supreme Court, boils down to this: ignore how she's ruled in the 3,000 or so cases she's heard in her 17 years as a federal judge (except, of course, in the one the white guy lost), and instead, focus on a few lines in a handful of speeches she's given -- and voilà, you, too, can have a peek at Sotomayor's future tenure on the high court. Her actual rulings so far -- very few of which came up at Tuesday's first day of question-and-answer with the Senate Judiciary Committee -- won't help you discern her judicial philosophy. But those speeches will, no matter what she's done as a judge or what she says in her confirmation hearings. Because as Sessions explained, only once she's on the Supreme Court will her true, white-man-hating thoughts finally be unshackled.

"Philosophy can impact your judging," Sessions, an Alabama Republican and his party's leader on the Judiciary Committee, told Sotomayor. "I think it's much more likely to reach full flower if you sit on the Supreme Court ... than it will on a lower court, where you're subject to review by your colleagues in the higher court."

Armed with that prescience, Sessions and his colleagues were free to mostly disregard everything Sotomayor said Tuesday. Which was probably helpful to them, since nearly everything she said directly rebutted the assumptions behind their questions. "I want to state upfront, unequivocally and without doubt, I do not believe that any ethnic, racial or gender group has an advantage in sound judging," Sotomayor said in response to a question from the committee's Democratic chairman, Patrick Leahy of Vermont, who asked her about some of the GOP talking points early on, in order to give her a gentle lead-in to those topics. "I do believe that every person has an equal opportunity to be a good and wise judge regardless of their background or life experiences."

Nevertheless, barely 10 minutes later, Sessions was asking her this: "Do you think there's any circumstance in which a judge should allow their prejudices to impact their decision-making?" Sotomayor -- who didn't get to the point where she was virtually assured a seat on the Supreme Court by being born yesterday -- knew how to answer that one. "Never their prejudices," she told Sessions. But he kept at it. "Aren't you saying there that you expect your background and -- and heritage to influence your decision-making?" he asked. "That's troubling me. That is not impartiality."

The obvious point -- that the background and heritage of old white guys influences their decision-making all the time, too -- would not have been the politically sound one to make. So Sotomayor played it cool. "My record shows that at no point or time have I ever permitted my personal views or sympathies to influence an outcome of a case," she said, and would wind up saying again and again, in more or less the same words, throughout the day. "In every case where I have identified a sympathy, I have articulated it and explained to the litigant why the law requires a different result. I do not permit my sympathies, personal views, or prejudices to influence the outcome of my cases." A few hours later, Sessions flat-out told reporters he didn't care what she'd said. "I don't know -- this is the confirmation process, so we got a statement from a day of the confirmation process that contradicts a decade or more of speeches."

That was more or less how the whole day went; Republicans hurled increasingly pointed questions at Sotomayor, the nominee calmly parried them, and the Republicans mostly ignored her. (Democrats chimed in between the GOP rounds to offer her softballs, though Dianne Feinstein of California and Russ Feingold of Wisconsin both pressed her -- gently -- on issues relating to the Bush administration's claims to unlimited executive power after the 9/11 attacks.) She mocked Sessions' reliance on a brief YouTube clip, but in a peaceful, nonconfrontational tone that seemed to discombobulate the Alabama senator. "Judge," Sessions sputtered, "I would just say, I don't think it's that clear." When Arizona Republican Jon Kyl began his questions by brusquely asking if he could pick up a line of interrogation about gun control, Sotomayor answered him cheerily, "Sure. Good afternoon, by the way." (Yes indeed, that famous Bronx warmth you've heard so much about was on full display.)

By the sixth hour of the hearing, South Carolina Republican Lindsey Graham had dispensed with the formalities altogether. "If I may interject, Judge, [lawyers] find you difficult and challenging more than your colleagues," Graham blurted, without irony. "Do you think you have a temperament problem?" A minute later, he had turned, weirdly, to personal advice: "Maybe these hearings are a time for self-reflection." Graham also cautioned Sotomayor to "appreciate the world we live in," in which she could say something about a "wise Latina" and still expect to win a seat on the Supreme Court -- since white men wouldn't be able to get away with similar remarks. And he led her through a ritualized denunciation of al-Qaida, asking how women would be treated if the jihadists had their way.

What made his performance even stranger, though, was that Graham is likely to vote for Sotomayor's confirmation. "Now, let's talk about you," he told her, just before haranguing her about her temperament. "I like you, by the way, for whatever that matters. Since I may vote for you that ought to matter to you."

But the Senate is, in general, kind of a weird place, and Graham isn't the only reason. For proof, just look at Orrin Hatch, the Utah Republican who engaged in a colloquy with Sotomayor about nunchuks, or Iowa Republican Chuck Grassley's improvised line after an anti-choice protester disrupted the session again: "People always say I have the ability to turn people on." Two days of hearings -- well, one day of Senate bloviation, and one day of hearings -- have only given the impression that the whole thing is pure political theater. Sotomayor spends her time fitting her opinions into narrow brackets that tell the Senate what it wants to hear, and the lawmakers, in turn, spend their time asking questions hashed out by aides in advance that are mostly geared toward scoring points with voters, not with the nominee.

If anything, actually, Sotomayor has shown herself to be even more conciliatory toward the Republicans going after her than is the pragmatic president who nominated her. At one point, nudged by Kyl, Sotomayor distanced herself, quite firmly, from Obama's theory that empathy helps judges make their minds up in the 5 percent of cases where the law doesn't indicate a clear winner. "I wouldn't approach the issue of judging in the way the president does," Sotomayor said. In response to Feingold's questions, she also indicated Obama may be in for a surprise if he thinks a Justice Sotomayor will rule in favor of any of the Bush-inspired legal arguments the administration has been making in terrorism cases. "A judge should never rule from fear," she said. "A judge should rule from law and the Constitution."

For the most part, though, the very nature of a Supreme Court confirmation hearing keeps anything too substantive from being discussed; the nominee always begs out of debating legal points that might come up if she winds up on the court, pleading a possible conflict. If her patient, unruffled testimony Tuesday is any indication, Sotomayor appears to play that game as well as any of her predecessors. Sessions may not be the only one who can see the future -- so far, anyone watching the hearings would feel comfortable predicting that this whole process ends with her on the court.