There is no limit on their willingness to write down what GOP operatives tell them and construct stories around it.

On Monday, I espoused my theory on Twitter about the birth of Politico, which led The Columbia Journalism Review to compare that thesis to the much different Politico-birth mythology created by its Editor-in-Chief, John Harris.  Some mischevous Politico editors seem to have wanted to take my side in that dispute, as they today provide a perfect illustration of what I meant.  Just compare this:

As they gear up for the 2010 midterm elections, Democrats appear secure in their House majority they won with a big gain in 2006 and reinforced with another advance in 2008. . . .

CQ Politics’ election analysts found 100 congressional districts with races where either major party stands a chance of winning the seat. That includes three true tossup seats, many districts that are only slightly competitive and some highly competitive. . . .

The only three contests in which CQ Politics rates an advantage to the challenging party are all for seats now held by the Republicans and targeted by the Democrats:

From the Politico cover story article:

Democrats giddy with possibilities only six months ago now confront a perilous 2010 landscape signaled by troublesome signs of President Barack Obama’s political mortality, the plunging popularity of many governors and rising disquiet among many vulnerable House Democrats.

Bolstered by historical trends that work in the GOP’s favor -- midterm elections are typically hostile to the party in power -- and the prospect of the first election in a decade without former President George W. Bush either on the ballot or in office, Republicans find themselves on the offensive for the first time since 2004.

Who are the sources for Politico's exciting announcement of a GOP resurgence?  A grand total of three:  "GOP pollster Whit Ayres," "GOP pollster John McLaughlin," and "Republican pollster Neil Newhouse," all of whom assure us that the signs point to imminent Republican triumph and Democratic doom.  After 21 straight paragraphs of chest-beating GOP triumphalism, Politico throws two Democratic sources into the last three paragraphs of the article for "balance," along with this hilarious qualifier:  "For Republicans, the news isn’t entirely promising."  What is it that makes things "not entirely promising" for Republicans?  Just little things like this:

There’s been no surge in GOP voter registration and little evidence that the party brand is experiencing a recovery. Last month, a New York Times/CBS poll reported that the GOP’s favorability ratings remained at a record-breaking low -- 28 percent, down from a high of 59 percent in November 1994.

A Wall St. Journal/NBC News poll from just last month also found:  "25 percent hold a favorable view of the Republican Party, which is an all-time low for it in the poll."  By contrast, "45 percent hold a favorable view of the Democratic Party" -- a mere 20 point gap.  That the GOP has been completely destroyed in two consecutive elections, is shattered and discredited by every metric, and continues to register record low favorability ratings doesn't seem to give Politico any pause in declaring it a party on the upswing and Democrats in deep, deep trouble.

As the Republican Party has completely collapsed over the last five years, declaring its resurgence has been a staple of establishment punditry.  Political genius Mark Halperin warned in June, 2006 -- roughly four months before one of the most humiliating electoral defeats in the last century -- "If I were them [Democrats], I'd be scared to death about November's elections."  In October of that year -- less than a month before the election -- Jay Carney and Mike Allen (then of Time, now of Politico), published this GOP success dance, as summarized by Eric Boehlert:

Mike Allen and James Carney wrote a detailed piece about why Republicans were not worried about the upcoming elections. "The G.O.P.'s Secret Weapon," read the bold headline. "You think the Republicans are sure to lose big in November? They aren't. Here's why things don't look so bad to them," read the subhead.

The article went on and on about how an "eerie, Zen-like calm" had fallen over GOP operatives who, despite a mountain of public polling data, did not fear big election losses. In fact, they coolly insisted their own prospects were "getting better by the day" . . . . Time ended on this chipper note: "As long as they [Republicans] end up keeping control of both houses, they still come out the winner on Election Day."

And most ludicrously of all, David Broder excitedly announced in February, 2007:  "President Bush is poised for a political comeback."

There are many motives for publishing "GOP-on-the-rise" stories.  It's virtually certain to generate a Drudge link, Politico's holy grail.  It ensures appearances on GOP-friendly cable news and radio talk shows.  It solidifies relationships with dirt-peddling right-wing operatives who drive mindless scandals and distractions in a Democratic administration.  And it earns a gold star and pat on the head from right-wing polemicists in the never-ending quest of establishment journalists to prove they are not part of The Liberal Media, the goal which Mark Halperin openly embraced on his knees while pleading with Hugh Hewitt, Bill O'Reilly and Sean Hannity to stop thinking that he is One of Them, when he was hawking the book he co-wrote with Politico's Harris.

But as commonly as this GOP-loving storyline is spewed by establishment media figures even when all evidence negates it, Politico stands heads and shoulders below the rest.  It's hardly hyperbole to say that infecting our discourse with this GOP-resurgent claim is one its principal strategies, if not purposes.  Throughout the 2008 presidential campaign, they ran multiple stories "reporting" that Democrats were in serious trouble ("GOP strategists mull McCain 'blowout'") -- particularly due to national security issues, especially Iraq, which would single-handedly win the election for John McCain even as polls reflected record levels of hatred for that war.  And today's GOP-caressing inanity was preceded just days ago by Politico's cover story announcement that "House Speaker Nancy Pelosi is one of the most despised political figures in the country," featuring quotes along those lines from the highly representative Michelle Malkin and Rush Limbaugh.  All of that is consistent with Politico's control by a long-time, hardened GOP operative.

With regard to which party will really do well in the 2010 election, one can debate how much any of that matters (Matt Taibbi today, looking at the health care debacle, summarizes our government and political culture about as succinctly as possible:  "It’s the same with this health care bill. Who among us did not know this would happen? . . . Our government doesn’t exist to protect voters from interests, it exists to protect interests from voters").  It's why I've had a hard time even writing about the health care debate.  It was always inevitable that it would end the way virtually every other political debate does, regardless of which party is "in control":  with the tiny interests that control the government and their media allies prevailing through their stranglehold over the core of both major parties (just ask Dick Durbin).

Still, even amidst the endless sea of sleaze and whoredom, Politico always manages to stand out.  There is no limit on their willingness, their eagerness, to write down what GOP operatives tell them and then construct articles and screaming headlines based on it.  It's what they exist to do.  And one can't really overstate the influence its gossipy, simple-minded headlines have on cable news chatter and the political narrative of the day.  The tiniest amount of shame would preclude a media outlet that has run one disproven "GOP-rising" article after the next from doing it again.  That's exactly why Politico has done it again today and will keep doing it.

UPDATE:  On a mostly unrelated note:  when establishment media outlets publish articles about online journalism and blogs, they've typically been filled with snide demonization and tired, condescending platitudes.  In the past, such screeds have often even been authored by people who have no familiarity with the topic they're describing.

A new and lengthy analysis of online journalism in The New York Review of Books, by Michael Massing, largely breaks that mold.  His piece is mostly respectful, well-informed and even occasionally insightful regarding numerous online media outlets and blogs, including mine.  But after praising new media journalism and favorably contrasting it to establishment journalism, Massing resorts to a series of barely coherent anti-blog clichés in order to undermine his own positive analysis.  Many of those clichés are directed toward my work here (and are quite redolent of Chuck Todd's "30,000 feet"/"perfect world" dismissal).

I'll perhaps have more to say about Massing's article, but for now:  Brad DeLong does a superb job of dissecting the reasons Massing's backtracking makes so little sense though is still quite revealing (and many of the comments to DeLong's post are well worth reading as well).

UPDATE II:  Two related notes:  (1) TPM 's Zachary Roth notes that Politico today mindlessly repeats the latest GOP scare tactic:  "Will [Obama's health care] proposal promote euthanasia?"; and (2) Jane Hamsher examines the significance of the announcement by Ezra Klein -- who positioned himself as one of the most influential progressive voices on health care reform -- that the public option, probably the most important progressive goal, doesn't much matter, and how Ezra's announcement (as has happened before) tracks almost perfectly the Obama White House's decrees on the same topic.

As for the notion raised by some in Comments that dissatisfaction with Obama has increased of late, this is obviously true.  I think much of it is the standard honeymoon-ending return to normalcy, but even if it's more than that, that hardly means there is a GOP resurgence.  Many people (myself included) have been quite dissatisfied overall with the Obama presidency, but that hardly means that we hold the GOP in any less contempt or regard its return to power with any less horror.  That is now the party of Rush Limbaugh, Sarah Palin, Glenn Beck, Jeff Sessions, Dick Cheney and Bill Kristol.  Dissatisfaction with the Obama administration is hardly going to drive anyone into their despised arms.  A Republican resurgence is going to take much more than some slippage in Obama's approval ratings.

UPDATE III:  A just released New York Times/CBS News poll finds yet another all-time low in favorability ratings -- and an all-time high in unfavorability -- for the party Politico declares resurgent (click on image to enlarge): 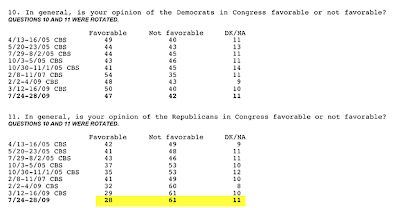 Looks like Politico picked the wrong day to run their latest "GOP-on-the-rise" story.

The poll also found -- as polls routinely do -- overwhelming support for a "public option" as part of the health care reform package:

That means it's highly unlikely that there will be a public option in what ultimately passes, since in Washington there is, generally speaking, an inverse relationship between the beliefs of the public and the laws that are enacted.