What possible justification is there for actively concealing evidence of war crimes? 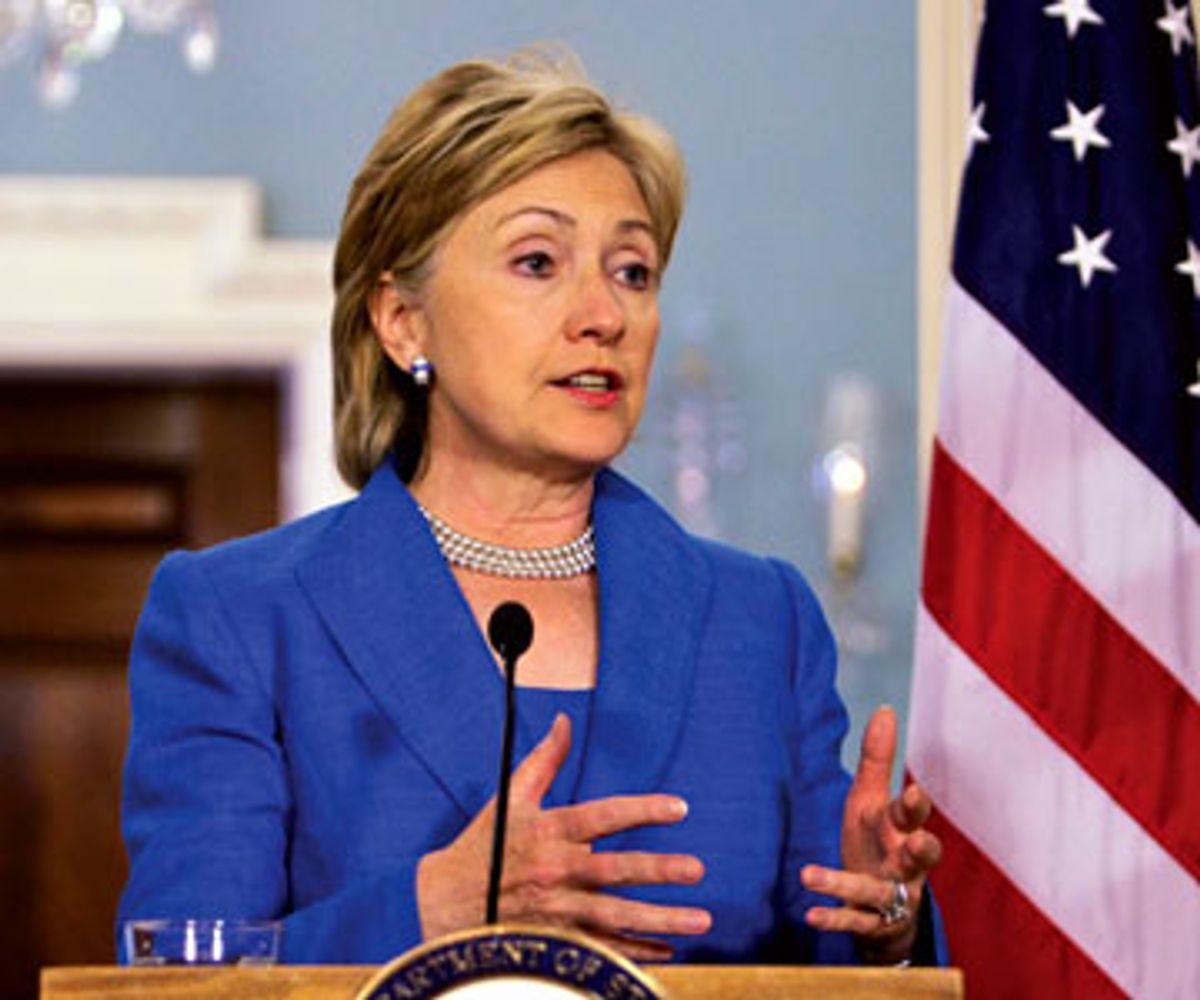 I've written several times before about the amazing quest of Binyam Mohamed -- a British resident released from Guantanamo in February, 2009 after seven years in captivity -- to compel public disclosure of information in the possession of the British Government proving he was tortured while in U.S. custody.  At the center of Mohamed's efforts lie the claims of high British government officials that the Obama administration has repeatedly threatened to cut off intelligence-sharing programs with the U.K. if the British High Court discloses information which British intelligence officials learned from the CIA about how Mohamed was tortured.  New statements from the British Foreign Secretary yesterday -- claiming that Hillary Clinton personally re-iterated those threats in a May meeting -- highlight how extreme is this joint American/British effort to cover-up proof of Mohamed's torture.

In August 2008, the British High Court ruled in Mohamed's favor, concluding in a 75-page ruling (.pdf) that there was credible evidence in Britain's possession that Mohamed was brutally tortured and was therefore entitled to disclosure of that evidence under long-standing principles of British common law, international law (as established by the Nuremberg Trials and the war crimes trials of Yugoslav leaders, among others), and Britain's treaty obligations (under the Convention Against Torture).  But as part of that ruling, the Court redacted from its public decision seven paragraphs which detailed the facts of Mohamed's torture -- facts which British intelligence agents learned from the CIA -- based on the British Government's representations that both the Bush and Obama administrations had threatened to cut off intelligence-sharing with Britain if those facts were disclosed, even as part of a court proceeding.

The British government's claims about these threats led the British High Court to conclude that it could not disclose those facts in good conscience because the U.S. was, in essence, threatening to put the lives of British citizens at risk by terminating intelligence-sharing over terrorist threats.  When re-affirming its decision (.pdf) to withhold that information in light of American threats, the Court pointedly wrote:

We did not consider that a democracy governed by the rule of law would expect a court in another democracy to suppress a summary of the evidence contained in reports by its own officials or officials of another State where the evidence was relevant to allegations of torture or cruel, inhuman or degrading treatment, politically embarrassing though it might be.

Ever since this controversy became public, there have been disputes over exactly what threats the Bush and Obama administrations were really issuing.  Were the threats real; were they contrived and issued at the request of the British government in order to give them a pretextual weapon to bully the British High Court to keep the torture facts concealed; or was it some combination of both?  What has been clear from the start is that the British Government, at its highest levels, insists that it was threatened this way by both the Bush and Obama administrations.

The letter explicitly threatened that the U.S. would cut off intelligence-sharing with the British in the event of disclosure of these torture facts by the British court.  The letter expressly warned that such action "could reasonably be expected to cause serious damage to the United Kingdom's national security" and "it is almost certain that the United Kingdom's ability to identify and arrest suspected terrorists and to disrupt terrorist plots would be severely hampered."  In other words: if you let your courts describe how we tortured Mohamed -- even if your laws, your treaty obligations and decades-old international law compel such disclosure -- we may purposely leave your citizens vulnerable to future terrorist attacks by withholding information we obtain about terrorist plots aimed at your country.

Hillary Clinton, the US secretary of state, personally intervened to suppress evidence of CIA collusion in the torture of a British resident, the high court heard today. . . . David Miliband, the foreign secretary, has repeatedly told the court that the US would stop sharing intelligence with the UK if the CIA material was published. . . Today, it heard how Miliband met Clinton in Washington on 12 May this year.

In a written statement proposing a gagging order, Miliband told the court that she "indicated" that the disclosure of CIA evidence "would affect intelligence sharing".  Pressed repeatedly by the judges on the claim yesterday, Karen Steyn, Miliband's counsel, insisted that Clinton was indeed saying that if the seven-paragraph summary of CIA material was disclosed, the US would "reassess" its intelligence relationship with the UK, a move that "would put lives at risk".

Whatever the truth here is about these threats, it is undeniably clear that the U.S. and British Governments are working in collusion to keep concealed the evidence of Mohamed's torture.  In February, the Obama administration issued a public statement praising the British Government for convincing its High Court to keep these facts concealed and said that this concealment would "preserve the long-standing intelligence sharing relationship that enables both countries to protect their citizens" -- certainly an implied threat that the opposite would happen in the event of disclosure.  And in the U.S., the Obama administration has engaged in its own extraordinary efforts to deny Mohamed a day in court, invoking the "state secrets" privilege to argue that the torture program which victimized him must be kept secret, and then after the Obama DOJ lost in the Ninth Circuit, trying to get that decision reversed by the full Circuit court.

What could possibly justify this full-scale joint effort by the Obama administration and the British government to cover-up evidence of Mohamed's torture?  In April, when I interviewed one of Mohamed's lawyers, Clive Stafford Smith, he pointed out:

Covering up evidence of torture is a criminal offense for which you can go to prison here in Britain, and I imagine in the US but I'm not quite sure about that. And the idea that the British government would conspire with the US or be threatened by the US to do this is again an independent violation of the law.

It's one thing to try to impede prosecutions of those responsible for torture by invoking the inspiring mantra that we Must Look to the Future, Not the Past.  It's another thing entirely to actively cover-up evidence of that torture and block the victims from their day in court.  There is now a very active controversy over exactly what role the Obama administration and British government is each playing in the issuance of these extraordinary threats.  But there is no doubt that both governments are actively attempting to keep this evidence concealed.

In February, Andrew Sullivan wrote about the Mohamed case:  "with each decision to cover for their predecessors, the Obamaites become retroactively complicit in them."  In May, Sullivan wrote:

Slowly but surely, Obama is owning the cover-up of his predecessors' war crimes. But covering up war crimes, refusing to prosecute them, promoting those associated with them, and suppressing evidence of them are themselves violations of Geneva and the UN Convention.  So Cheney begins to successfully coopt his successor.

Also in May, The Washington Post's Dan Froomkin -- in a column entitled "President Obama Joins the Cover-Up" -- wrote:  "The president who came into office promising to restore our international reputation and return responsibility to government now seems to be buying into the belief that covering up our sins is better than coming clean."

This has gone well beyond a passive failure to apply the rule of law (and comply with our treaty obligations) by prosecuting.  Instead, these are now active efforts to cover-up war crimes.  The British Foreign Secretary insists that Obama's Secretary of State personally threatened that the U.S. would conceal information about terrorist plots from the British if the facts of Mohamed's torture were disclosed, while the Obama administration actively seeks to block American courts from examining the same evidence.  Can anyone justify that?