"It's the tea-baggers -- they have woken us up"

At a town hall in Charlottesville, Va., supporters of healthcare reform try to balance out the opposition 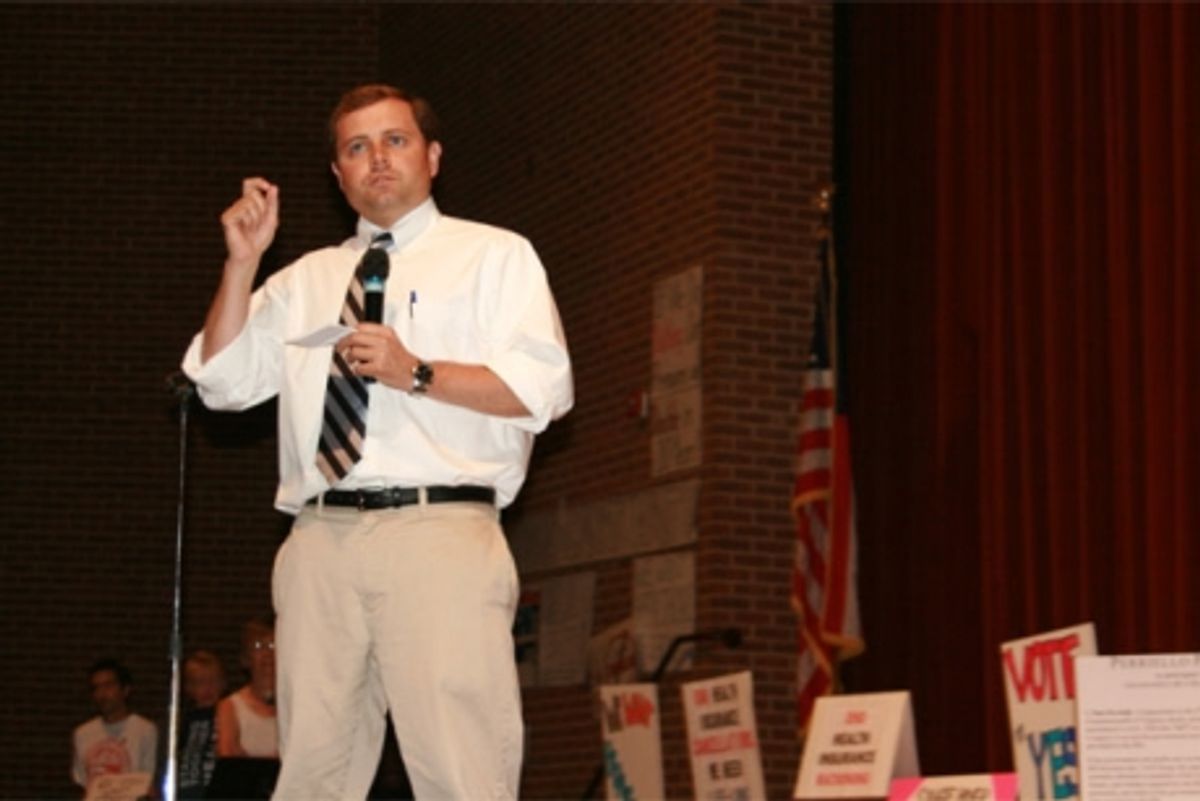 CHARLOTTESVILLE, Va. -- The idea was pretty simple: Rep. Tom Perriello, a freshman Democrat who won an upset victory over his conservative predecessor last fall, would show up at the local high school auditorium on Tuesday night, take a few questions, and then meet one-on-one with some constituents. In and out in two hours, no problem.

The only problem with that plan? No one ran it by the constituents first. By 8:45 p.m., nearly three hours after the town hall meeting started, there were still a couple dozen people lined up at the microphones to say their piece. (Perriello didn't actually wrap up the one-on-one sessions until after 11 p.m., though Salon didn't stick around to see the bitter end.) More than 1,300 people had crammed themselves into the theater to hear Perriello -- which, considering he was doing his eighth town hall meeting in nine days, was either an indication that Charlottesville really slows down when the University of Virginia clears out for the summer, or a sign of just how big the healthcare reform debate has gotten. And unlike at some similar sessions around the country, most of the crowd was there to cheer the reform proposals on.

"Democracy appears to be the thing to do on summer nights," Perriello said. He tried to set the tone for a calm, reasonable debate. "I believe everyone is here on their own free will. I believe everyone here has a genuine interest in expressing their views. I think the attempts on both sides to dehumanize this debate has not been helpful."

And for the most part, he got it. RedState.com had listed the town hall meeting on the calendar it's keeping for opponents of President Obama's healthcare reform proposals, and the 5th District of Virginia is a pretty conservative place to begin with; Perriello has gotten yelled at a bit at some of his other sessions, and there were plenty of people in the room Tuesday night who didn't like the bills Congress is debating. As well as some LaRouchites outside, who were wearing big posters of Obama with a Hitler mustache and passing out pamphlets titled, "Act Now to Stop Obama's Nazi Health Plan!"

But Organizing for America, an offshoot of the Democratic National Committee, had also gotten supporters to turn out, and Charlottesville is, after all, a college town. The LaRouchites didn't find much solidarity. "I can't believe you would put those two images together," one guy told them as he walked by on his way out. "You're an asshole."

Based on the cheers and the boos that various questions and answers got, the room seemed to be split about 70-30 in favor of reform. Plenty of people asked not whether the healthcare plan would fund government euthanasia, but why Perriello didn't support a single-payer system in place of the current one. Progressives said they wanted to bring people out to help counter the small, but loud, groups of opponents that have been showing up and getting headlines at other meetings. "It's the tea-baggers -- they have woken us up," said Carroll Ann Friedmann, the regional coordinator for OFA. "We wanted to make sure that this actually did represent the American people."

That's not to say the hardcore opposition wasn't represented, too. "We don't trust you!" one man told Perriello, after most of the crowd had drifted off toward home. "You notice I didn't give my name? It's because I don't want to wind up on Obama's enemies list." A small band of Tea Party activists showed up, with "Don't Tread on Me" flags, and sat in the back booing.

"I'm totally against government involvement in healthcare," Anthony Sutton, one of the Tea Party crew, told me. "It's not a right." Sutton, though, probably wasn't the best spokesman for his cause: at 53, he's eligible for Medicare, because of a disability claim, and the only reason he isn't using his government healthcare is because his wife's job has a better plan. He was pretty sure Obama was up to no good, with healthcare or anything else. If the country isn't careful, "we would come into a socialist state, or national socialism, like Nazi Germany," Sutton said. I asked him if he really thought Obama was a Nazi. "I don't think he's a Nazi, but I do believe that he is not what he appears to be," Sutton said. "He still hasn't proved his citizenship. I think he was born in Kenya."

Alas, Sutton couldn't even get the bogus "facts" of the Birther movement right. The reason he knows Obama is Kenyan? "Because of where he got his education, and certain countries that he lived in -- the only way he could have lived there is if he was not a U.S. citizen," he said. "They wouldn't allow U.S. citizens." I asked him which countries he meant. "I wish I could name the countries, but I think it's -- I'm just guessing -- Malaysia, or one of those Muslim states." Obama never lived in Malaysia, and at any rate, neither Indonesia -- where he did live -- or Pakistan -- the country where Birthers suspect Obama must have traveled on a Kenyan passport -- banned U.S. citizens. Sutton also thought Obama "got money to pay for his school from the Saudis." How did he know? "It's documented."

Birthers aside, part of the reason for the generally civil tone may have been Perriello's careful positioning on healthcare. Though Perriello has the kind of résumé that makes progressives swoon -- special advisor to the prosecution on war crimes trials in Sierra Leone, co-founder of DarfurGenocide.org and of Res Publica, a group that promotes social justice and civil society -- he represents a district that even the most optimistic Virginia Democrats had a hard time imagining turning blue before he won it. He voted for the stimulus package, but against Obama's budget; he voted for the "cap and trade" energy legislation the House passed this summer, but against new food safety regulations that conservatives hated. For now, Perriello says, he wouldn't actually vote for any of the healthcare reform proposals in the House. "I was a believer in waiting for the fall, because I wanted the month of August to have a month-long conversation with all of my constituents," he said.

The reason for his reluctance, though, isn't ideological; Perriello says he's just waiting for more concrete proof that the reform proposals will help lower costs for the middle class. Unlike the Blue Dogs his voting record seems to be emulating, he defended the principles behind the legislation readily and comfortably at the town hall, and his liberal constituents don't seem particularly worried about where he'll be in the end. When a questioner brought up the "death panels" that Sarah Palin says reform would create, Perriello flatly set the record straight.

"There are no 'death panels' in the bill, there just aren't," he said. "If one believes as a matter of faith that this is a secret strategy to get to rationing care, that is a legitimate position to take, but I can't refute it. You can say a lot of bad things about the Democratic Party, but it has been the party that has taken care of seniors over the years."

Most of the night, the town hall seemed mostly to serve as a forum for people to tell not just Perriello, but also their neighbors, about the urgency of reform. Kathy Troyer, 54, a medical writer from Earlysville, Va., spoke about her fear of losing her job, and with it, her health insurance; she has Stage 4 metastatic breast cancer, and she couldn't possibly get private insurance. "Politicians typically come from very well-to-do backgrounds," she told me outside the auditorium after she spoke. "They don't know shit about what [this debate] means." But she thought Perriello got it, mostly, and while she had some gripes about how slowly the reforms would kick in if the bill passes, she expects it to be better than the status quo.

Meanwhile, Perriello will take a break for a few days, then hit the town hall trail again on Monday night. By the time the August recess is over, he'll have done 21 of them, all around his district.